The way my brain works best is with a bit of order. I had been struggling to remember off-the-top-of-my-head where I was at with all of the mamas and their businesses...I tried to make notes in my phone, using emojis to denote different steps, but it was all very confusing. Thankfully, there was an extra whiteboard hanging around the kid's house and my amazing mother sent some whiteboard markers with a recent visitor, so I was able to put my thoughts down in an easy-to-update fashion. 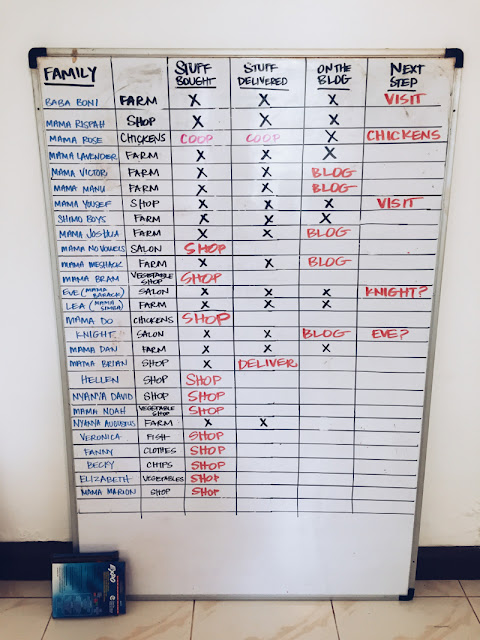 Obviously, there are still quite a few deliveries to be made--and posts to be written...though I have written about seven of these families (1, 2, 3) since this photo was taken. (You better believe I went straight to the board to make the changes, lest I forget!)

In-between the writing and purchasing of items for upcoming deliveries (I think we'll make EIGHT deliveries this weekend!) I wanted to make a trip to see two businesses that were begun early-on, in hopes of being able to share a progress report of sorts.

And that's just what we did yesterday.

The staff of Precious Kids Center have been amazingly helpful in the pick-up and delivery processes. For instance, yesterday Mike and Ben went to town and picked up four bags of charcoal for a few businesses and then, today, Mike went back to town to pick-up bags of beans and maize. They are the greatest. 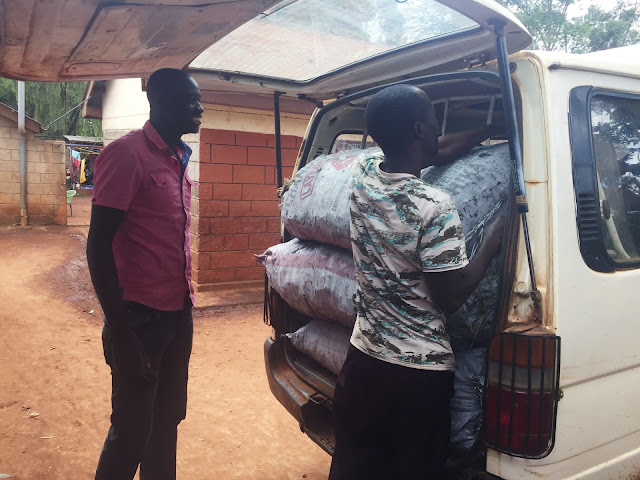 While they did all of that running around, I mended school uniforms and other well-loved clothing items in the backyard before taking a break to share a Coke with my girl Suzie. 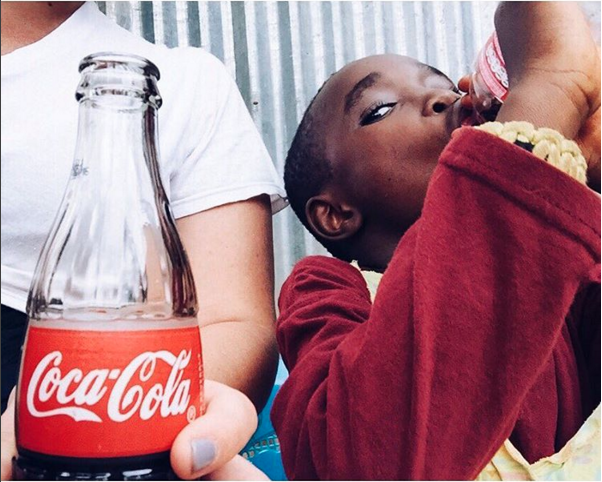 Once Mike was back and had eaten lunch, we set-off to visit two families.

Up first: Baba Boniface.
(See more of his story here and here.)

Baba Boniface was our first stop on this whole "can we help people start businesses for a reasonable amount of money?" investigation. He was remarkably helpful and, honestly, part of the reason I ran ahead with such confidence. I, happily, sent him with the money to buy his own seeds and he, excitedly, returned with seeds for two different kinds of cabbage, and tomatoes. He had mentioned how expensive these were and I was so pleased that he was so giddy to have the chance to grow and sell these vegetables.

When we arrived on Wednesday, he was standing in the middle of the field. I asked where his new crops were and he explained, with such detail that he even used words like "germination", that the 'test seeds' did not grow as he had hoped, so he's holding off until the rainy season finishes so he can yield the best possible crop.

He then pointed to a spot behind me and said, "But look at this cabbage!" I turned around to two-thirds of the field, a little confused as to what I was supposed to be looking at, but Steve was ahead of me and ran up to this HUGE (I'm talking giant, "Feed Me Seymour"-sized) cabbage.

Obviously, I had to take a picture. He told Boniface to come and stand with him because, "Son, this is your future." (Adorable!) 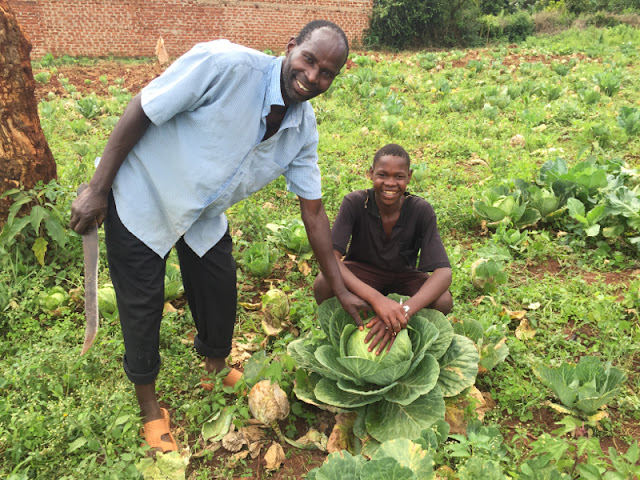 NyaNya Yousef greeted us with big hugs and took us straight in to the house. We chatted for a minute before asking how the shop is doing. (I hadn't seen it outside, so I was a little concerned that something had happened.) She told us that the neighbors just come in to her sitting room to buy the things they need. This system allows her to keep an eye on the small children and is much easier than moving the items (including a large, heavy bag of charcoal) in and out of the house each day.

She went on to tell us us how well a few of the items (charcoal and soap) are selling, but mentioned that others (salt and matchboxes) are not selling at all. And then, with pride in her voice, she shared that, from the profits, she was already able to buy a large bag of maize to sell as well! Such a great business woman.

Then, her voice changed. She told us that when the landlords saw that she is now running a business, they dramatically increased her rent. So, she has decided to pay the rent for December and then move to a newer, more affordable, place. She has been working to save as much as possible and already has more than half the amount she will need to BUY a small plot and home for the family! (She has nearly $800 saved, which is amazing!)

We had left one bag of charcoal in the van earlier in the day, with the hope of making another delivery that afternoon, but when I saw how hard this woman is working--and how well she is investing and saving profits--we decided to leave the bag with her. She was so happy! 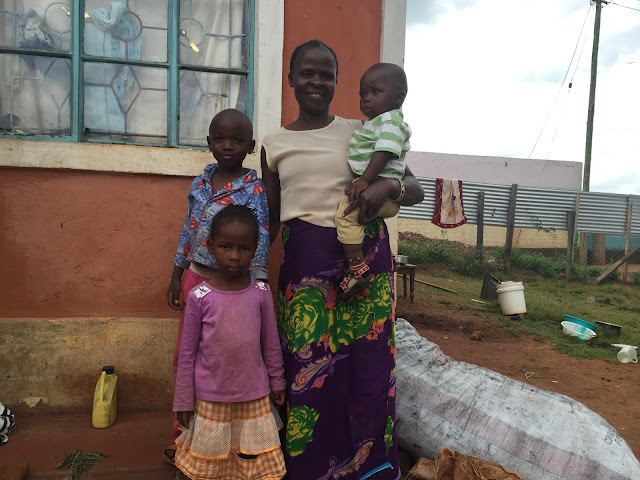 On the way back to the kid's house, we stopped by Mike's salon. He was so excited to show me the newly-painted sign and show me where they had expanded it to fit a second chair. The family that supported him through school has continued to help him on the path to success by backing his business dream. He talks about them with such love and gratitude, it's really fun to see the confidence he has because he knows he has a whole crew of people who believe in him. 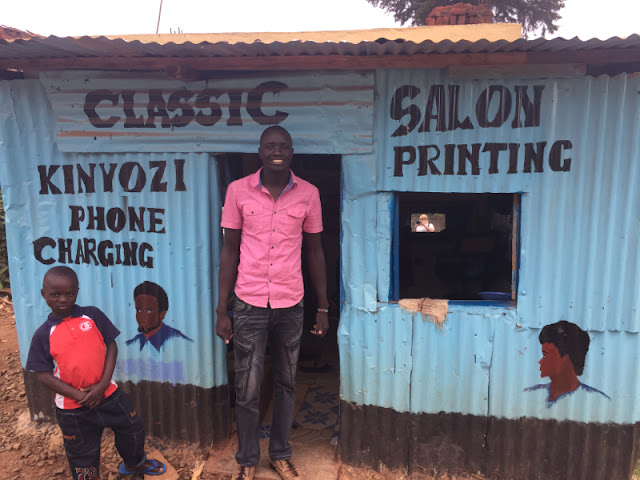 That afternoon, while we were visiting Baba Boni and NyaNya Yousef, Sammy was taking Augustus home to visit him Grandmother. She cared for him for the majority of his childhood, but after a rough recovery from a hernial surgery that left Augustus in need of a more well-rounded and specific diet, he moved in to the Precious Kids Center.

Since school has been out on break this month, Augustus has gone with us on a few house visits to scout out potential families. He was also at the clinic with us last week when I gave seeds to two mamas. So, the night before he left for his grandmother's, he pulled me aside and asked if I would please give him some seeds to take to her. He said she has land and knows how to plant and it would be so good for her to have "something to eat and something small to sell." How could I say no to that?

So, I left a tin of seeds for Sammy to bring with them. She said, in the course of conversation, the uncle had mentioned that he is hoping to get some seeds to plant in their field. Sammy said, when she surprised them by pulling out the tin, they were so excited! 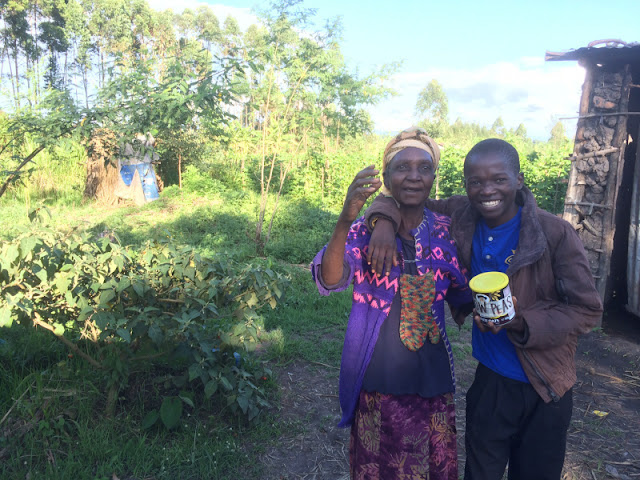 I am aware that not every story will be this lovely.

When I began this little venture, I told Sammy I was hoping for a 70% success rate. I know that because of bad weather, poor decisions or investments, and even some theft, a few of these businesses will not be long-lasting. (This is, in part, why I felt it was important to give each family a choice as to what type of business they would like to run; I hoped they would choose something they enjoy, making it a little more likely to succeed.) But I am also praying that this would be a small step in the right direction for each family. That, just as I have learned from my financial mistakes in the past, each parent would look back and grow from theirs.

I hope you will join me in praying for these businesses, business owners, and their children to grow--and THRIVE--in the coming years.
Posted by Allison at 10:40 PM