In the two weeks since I announced the launch of this new small-business project with the hope of offering sustainable sources of income to families who may otherwise seek employment in places or from people that may take advantage of them, so many great things have happened:

• Many have asked how to support these small businesses. Thank you so much for your belief in this program and for your excitement to join in! {Donation information can be found at the end of this post or on the right-hand side of the page.}

• A few donations have come in so far! which means...

• We've been able to identify more families who could benefit from this program and begin plans for their start-ups!

First, an update on those whose start-ups have begun: 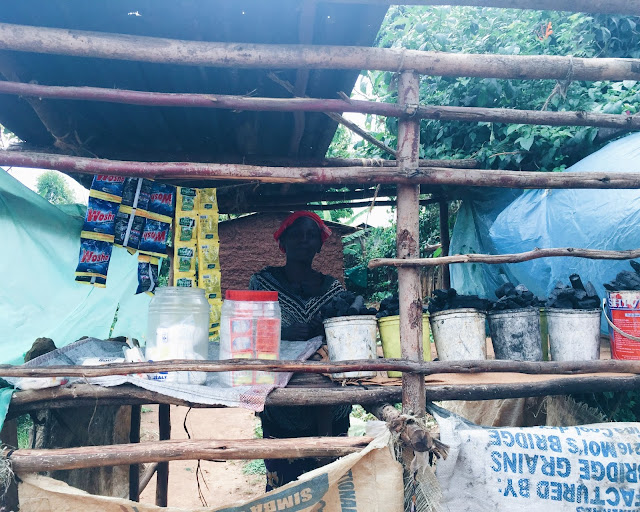 (I wish I had a better photo, but the lighting was terrible and I had walked there and the route finishes with a huge, steep, rocky hill, so I was awfully sweaty and out-of-breath when we arrived. Next time we visit, I'll go by car so I can make sure to pay more attention to the documentation process.)

What was once a shop filled with buckets of charcoal--which is a big seller!--now carries even more necessities for day-to-day life in that neighborhood: laundry soap, bath soap, tea, salt, sugar and matches. Many of the items had almost run out due to popular demand and Mama Rispah was telling me, with excitement, of her plan to restock.

Yesterday, her youngest grandson came to school in a new-to-him pair of high tops (as opposed to his old crocs or worn flip flops) which he was SO excited to show me. I love the small, tangible ways this extra income is already improving the lives of Mama Rispah's family. I'm hoping to make another visit sometime this week to see how the inventory is holding up. 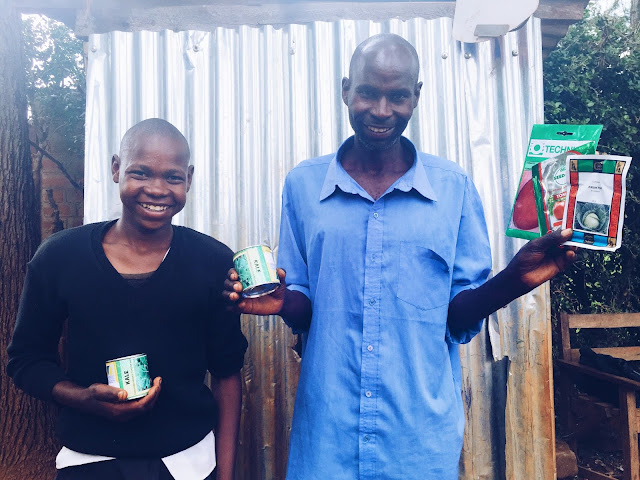 Each time I meet Baba Boniface--Steve--I like him more and more. One afternoon last week, we went to pick out the types of crops he would like to grow and he, excitedly, talked about the various types of each vegetable and how they vary in price, cultivation, and even taste. He went home with two different tomato plants and one package of cabbage. {He'd also, very helpfully, chosen the kale seeds for Jackson, Allan, and Paul's farm.}

As we were waiting to take this picture, (with his son Boniface) he told me that he would be heading home to prepare the soil and would let me know when he was ready to plant so I could come and take more photos of the process.

Looking at the prices on these seeds, I was (again) shocked by how helpful this relatively small gift can be. This man, who knows quite a bit about planting and tending crops from his years of working the farms of others--who makes the equivalent of a few dollars a week--would have to save for years (barring any unforeseen expenses or emergencies) to have a spare 750 shillings (about $7) to purchase just this packet of cabbage seeds. And now, thanks to your generosity, he and his family will have an entire acre of vegetables to harvest and sell come January! 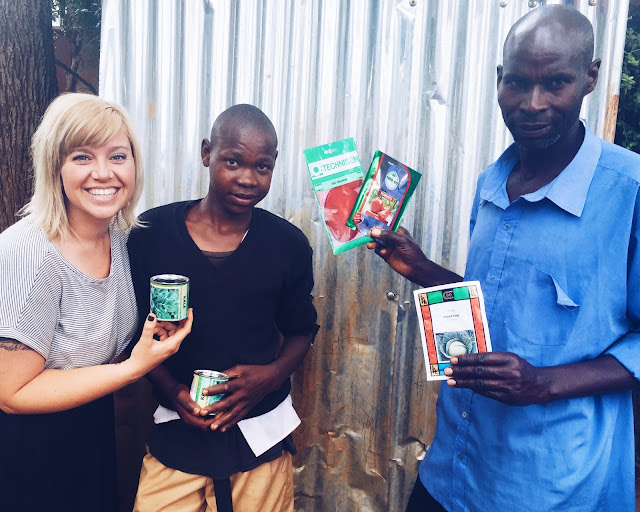 A quick update on Mama Rose. I received a donation specifically for Mama Rose's chicken business (thank you so much!) and wanted to share that it is also in the works! We have plans to begin construction of the chicken coop this week, but are awaiting the end of the rainy season to purchase the chickens themselves in hopes of longer life-spans once the cold (and chicken-disease-ridden) weather passes.

And now for a few of the new families! 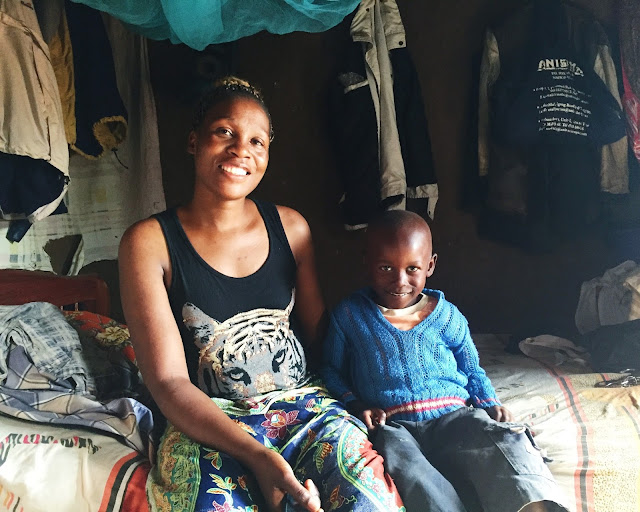 Eve is a single mother with two children. A few years ago, she participated in a women's Bible study run by Sammy and a few other American college students who spent several back-to-back summers serving here. She's been a dear friend to Sammy ever since.

We visited her house, where we met her son Barack and heard a bit about her dream to open a hair salon. She had no idea why we'd come to see her...she thought we were just stopping by for a visit. What a fun surprise it was, at the end of her story, to tell her we'd like to help make her dream a reality!

Kenyan women (of all ages) have their hair done in various styles (weaves, plates, braids) about once a month. Eve knows how to do hair, but could not afford the salon-quality blow dryer required to get the business up-and-running. Customers bring most of their own items, (combs, rubber bands, beads, or hair extensions) so all the stylist needs is a blow dryer, but this is still quite an investment for a single mother of two.

Eve is warm and welcoming. We walked to a few nearby homes to meet her landlady (and a man who wanted to say thank you for the treatment he received from a recent medical clinic provided by a team from Texas!) and drew quite the crowd--she knew them all by name. When we arrived back at her house and I asked to take her picture, she invited all of the neighborhood kids to join. 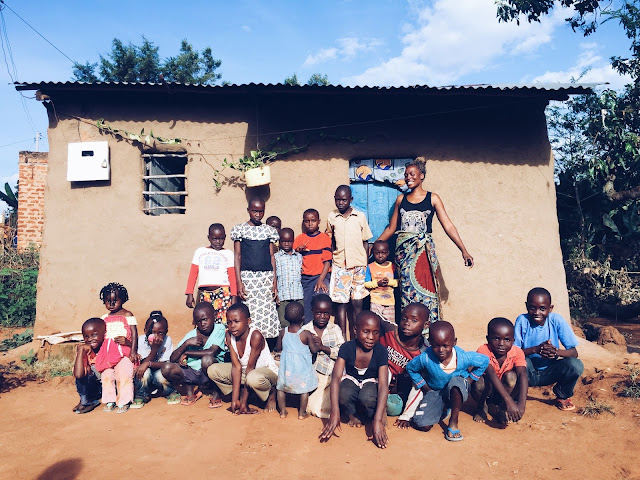 The next day, Sammy and I brought her her very own blow dryer. When she opened the bag and saw the box and said, "Oh! I'm so happy I could jump up and down! God bless you! God bless you so much!" before hugging both of us. Even though it was nearly dinnertime, she quickly said, "Oh! I'm going to look for work today!" I am really, really looking forward to watching how this small tool will help shape her family's future. 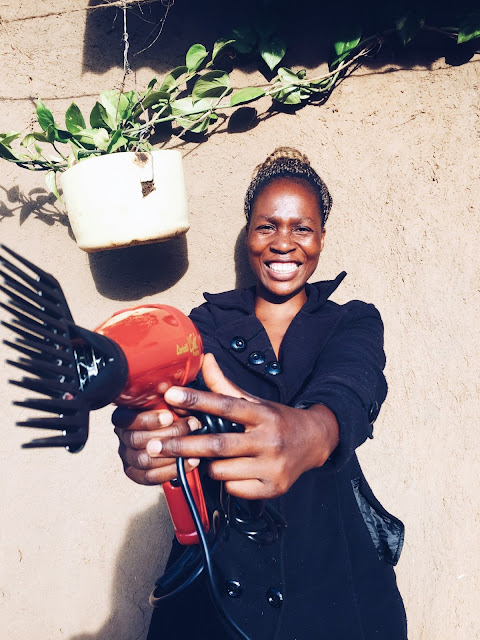 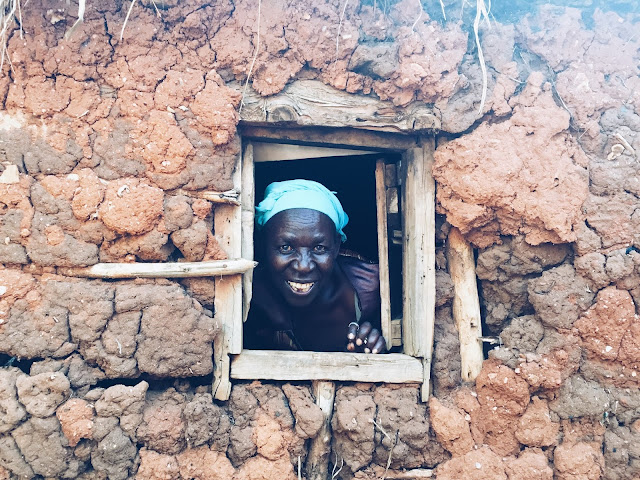 As we talked with Eve, her landlady came by to say hello. She had heard that there was a car on their narrow, bumpy roads and came to check it out. When she saw that I was taking pictures, she invited us to her house to photograph her kitchen. (I'm not sure why, but we obliged.) Once we arrived, we found a small one-room house with a mattress on the floor and a few belongings. (I have to imagine that being the landlord of a home or two in a slum is not a lucrative business. I'm willing to bet it's more wandering back and forth, reminding people that the rent is overdue than actually collecting any money.)

Just outside of her home was a small dirt box that she called her farm. As we drove away from the neighborhood, Sammy and I talked it over and decided to surprise Lea with a packet of seeds to grow kale in her little farm in hopes of giving her income a small, but ongoing, boost. 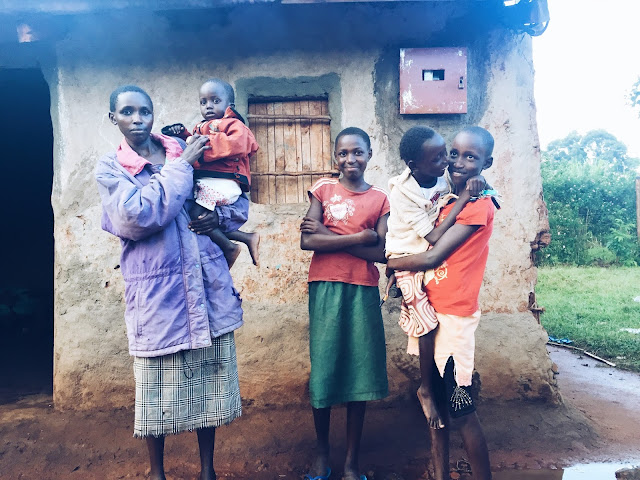 Mama Lavender has four children: three girls and one boy. Her third child, Lavender, has cerebral palsy and has been part of the Precious Kids Center for over two years. On school breaks and holidays, Lavender goes to stay with her mother (and her come-and-go father.) Mama Lavender has tried to find work here and there, but with four children--and one that requires a little extra care, (for example: being carried to and from the toilet several times each day) it's difficult to find a steady income.

Outside of their home is a large piece of land that is ready for planting. Mama Lavender told us that she had planted there before, but the neighbor's chickens got in and ate all of the sprouts, so there was nothing left to harvest. Next week, we will bring her new seeds--she's asked for two very popular and easy-to-tend vegetables--plus netting to keep the crops safe.

My birthday is coming up. I will be thirty-three on October 24th. My goal is to help 33 families begin their 33 new businesses for my 33rd Birthday. I have a running list of families who would benefit from this project...and I am so excited to see all of those businesses up-and-running by December 1st.

If you would like to be part of changing the trajectory of the lives of these families--with a one-time gift of $30--you can do so in one of two ways:

// Online giving (non tax-deductible) //
You can give via Paypal: allihibb@gmail.com
Or online: gofundme.com/allihibb

I am really looking forward to sharing more updates on these businesses. And introducing you to more of the incredible families we've chosen to partner with.
Posted by Allison at 8:06 AM