It Was The Freakin' Weekend, Baby, And We Definitely Had Us Some Fun

My final tasks before Sammy and her entourage arrived in Kitale were to take the car to be washed and stock the kitchen with fresh fruits and vegetables. Oh, and hang some mosquito nets. I wish I had more adequately documented that process because it was quite a spectacle, I'm sure. It involved pink duct tape, masking tape, twine and a whole bunch of climbing. I'm certain you can imagine the hilarity of me wedging myself between a bunk bed and a row of shelves to get to the corner to tape up the corner of the net, which would have already fallen by the time I made it down and back up the other side. I'll take a photo of the twined and twisted technique...it's not pretty, but it did the trick!

Anyway, back to the car wash. I didn't want to go alone, for multiple reasons: I didn't know where it was, I wasn't sure if they'd charge me more since I don't know the typical rates, and I had heard it could take up to an hour...so I brought along a few of the older house boys, fresh out of school and so excited for adventures.

Here's the car wash. It's pretty much one guy with a power hose and a hand towel. It took nearly two hours, but that car (inside and out) was sparkling! 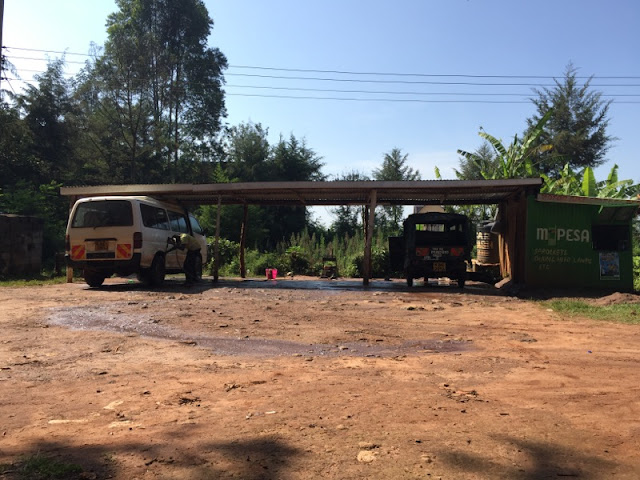 Augustus, Manu, and Pascal. None of them were particularly excited about taking this picture. Also, none of them knew how to throw this frisbee. 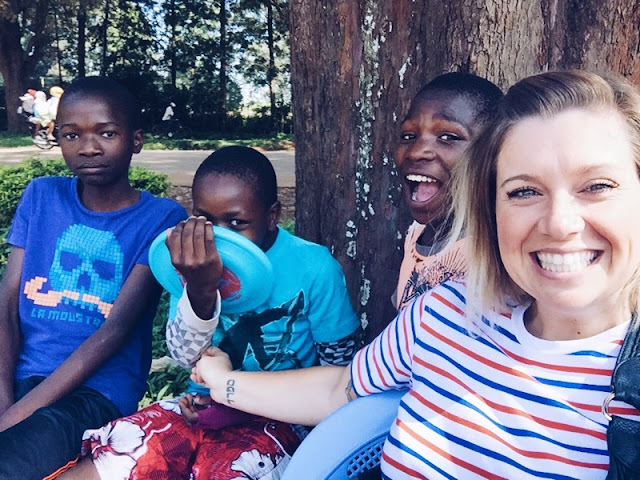 About an hour in, one of the school kids, Noah, and his mom walked by on their way to the hospital. Noah's mom stopped in the shop to buy a few things and Noah sat with us telling us about how he wants to "study a lot, grow big, get a car, and drive his mom and other people all around." He's absolutely adorable.

They were on their way to the hospital because, though Noah was diagnosed with epilepsy years ago, his medicine has recently stopped working and he has been suffering from frequent seizures and some paralysis on his right side. He was admitted to the hospital for more tests. So far, everything has come back normal, and they are working to find a new medicine to help lower the frequency of the seizures. 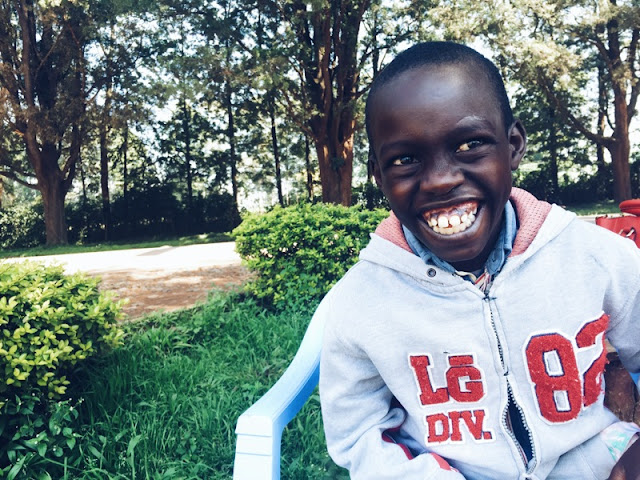 We left the car wash (one of the boys immediately rolled down the window--aaaaall the streaks happening right away!) and drove to town for lots of little things: bananas, passion fruit, avocados, assorted vegetables for 'stirfry', and three different stops--all unsuccessful--for mangoes.

And then, back to the kid's house! Dropped off the boys and went back to my house for a few hours of silence before the house was full.

Around 5:30, the van pulled in and everyone unloaded. They had been traveling for about 9 hours in a cramped van (including a stop at the hospital to pick up Jabal who had just been released after a successful surgery to remove the tumor in his foot!) but all were in such great moods!

They unloaded bags and freshened up a bit before loading in our van and heading to the kids house. Walking in to a home of 37 kids as the first thing you do in a brand new country...that's pretty brave! And this crew jumped right in: holding kids, swinging them around, dancing, singing, chasing, carrying, trying their best to translate (or sign!) what they were trying to say...it was so fun to watch! 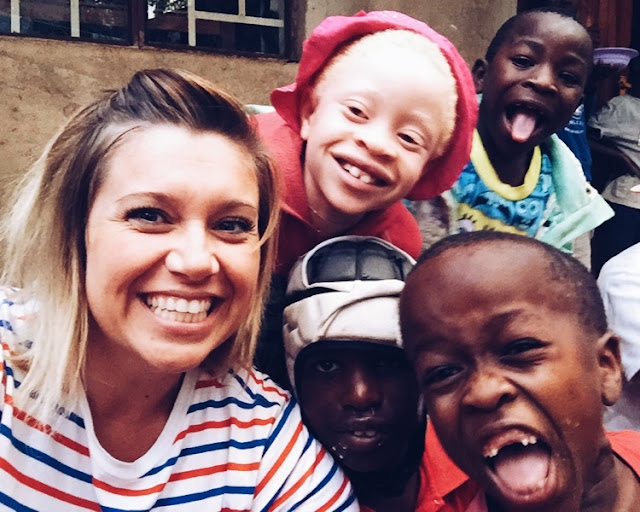 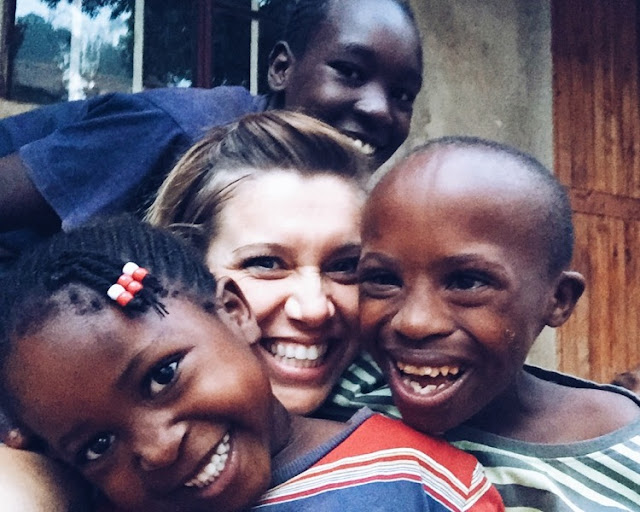 Manu got up on top of the van to get a good shot of all of the action, but it was too dark to really see the goings-on. 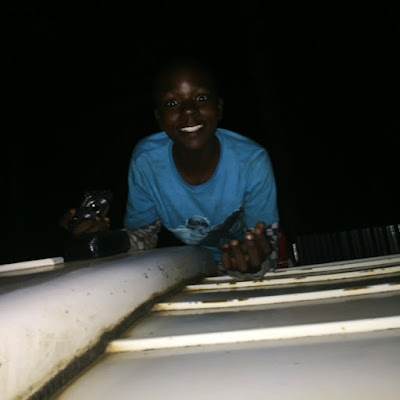 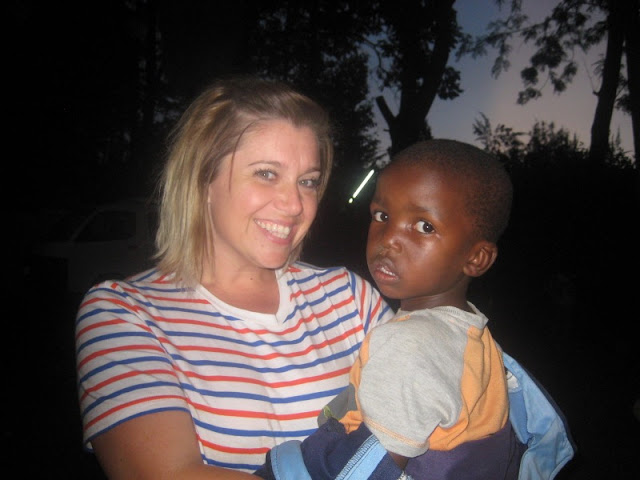 About an hour later, we went for dinner in town. Ruby Deli (duh!) and then home. Sammy had assumed they'd be ready for bed around 9 since it had been such a long day of travel, but these guys were up until almost midnight! They're really giving it all they've got. (Truth be told, their bedtimes are getting earlier every night as the days are catching up to them. Tonight, it was 7:45 for some of them!)

Sunday morning is always, always, always an adventure. And trying to take 19 kids in a van that already has 7 adults stuffed in is no exception! We ran the usual routine of changing and dressing kids, grabbing shoes and sending them out to the car. Sammy just kept loading until finally one sat on my armrest and another facing me at my feet...then we decided we were full. 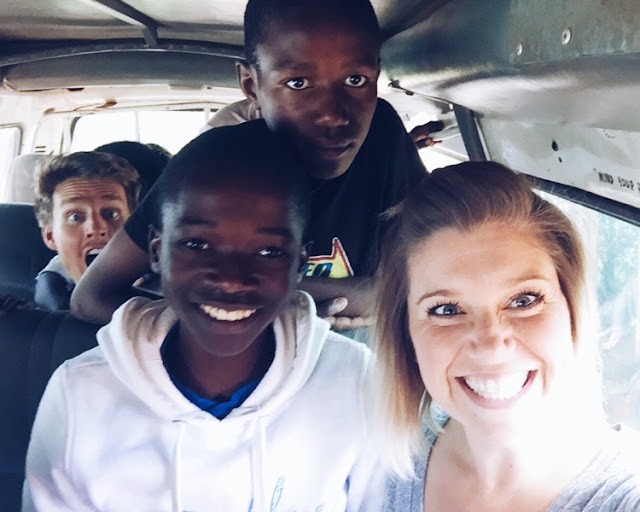 It was once we got to church that we realized we had loaded 19 kids in to about 6 seats in the car. The ushers arranged their own little section for the kids when we walked in (late) to church. 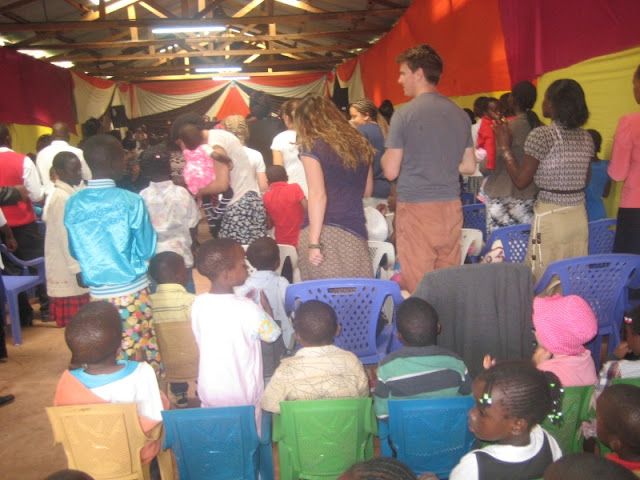 After service, they were holding an album release party for a woman in the choir, so we got up to leave a little early. (You can't hold the attention of that many kids--or my attention, really--for more than two hours...even though this week's guest preacher from Cameroon was really great!)

We were two steps from the back door and the pastor (who's giving announcements) yells (in to the mic), "Samantha! Where are you going?! Bring your visitors up to say hello to us!" And we all have to walk back up (the entire length of the church) to the stage. Sammy's mom took the microphone from Pastor Winnie and introduced us to the church. When she got to me, she said, "Allison is a singer. She should sing for you!" And the pastor said, "Okay! Now?!" To which I shook my head and said, "Next week!" So, there's definitely going to be something to share about on Sunday afternoon!

We shoved 26 of us back in to the van and made it in time for lunch at the center...and a few after lunch piggy back rides, of course. 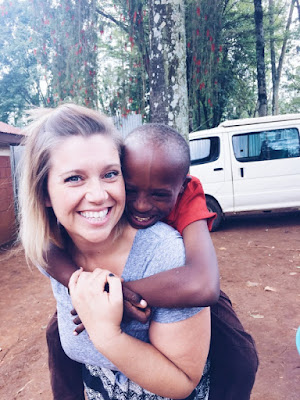 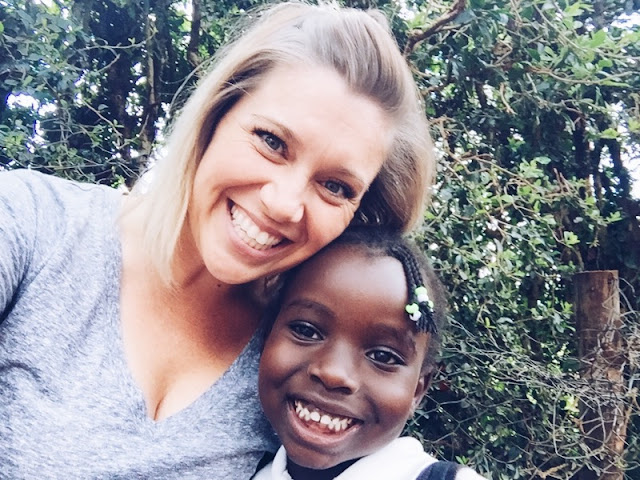 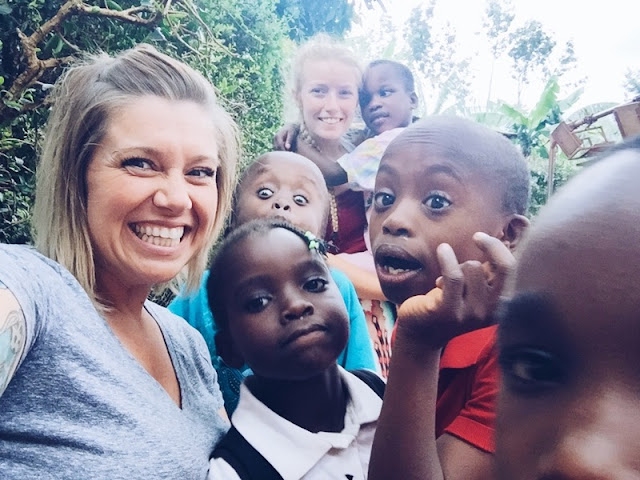 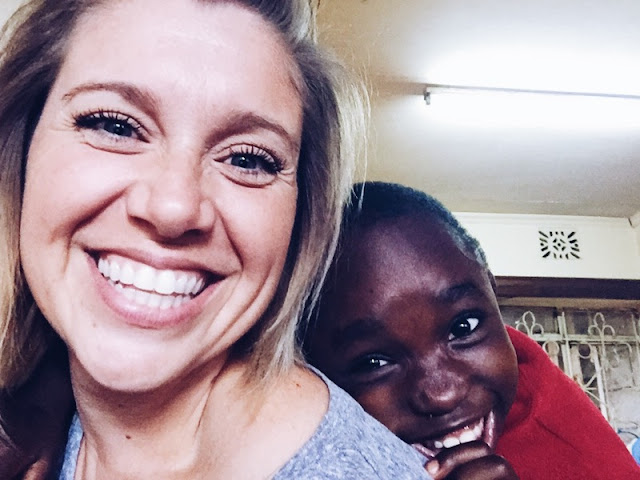 Suzie goes crazy for piggy back rides. It was the only way to keep her inside once the rain started. On Sunday, she showed her gratitude for the piggy back ride by licking my neck during the picture. 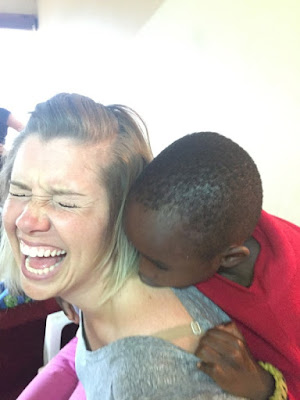 With the rain came our departure. We went back to our house for naps and a quick change out of church clothes...but would never miss an opportunity for Sunday Night Chapati, so a few hours later, we were back in that familiar living room.

I pulled out two lipsticks that have been in my purse (unused) since I arrived and set to work making everyone laugh by putting lipstick on the boys. Of course, everyone wanted a turn!

Manu found a neck pillow and used it as hair. The other boys had to try! And Linah's coloring is perfect for bright red lips! ;) 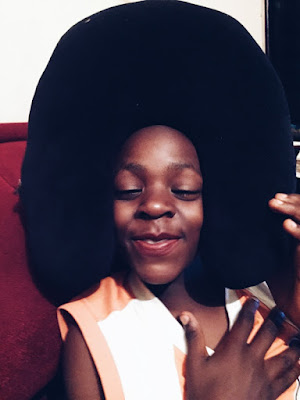 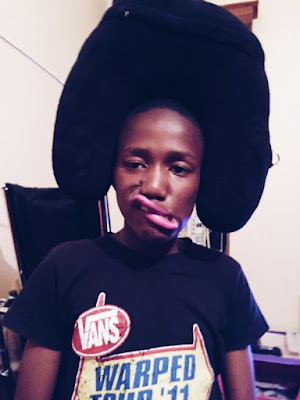 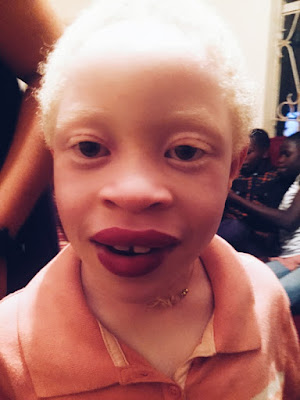 We began to say our goodbyes and get in the car as the rain started again. And we could hear some cheering and hollering and scuffling in the house. I came back to find this: a load of kids holding on to Sammy's hands--they didn't want her to leave. That's how loved she is by these kids. 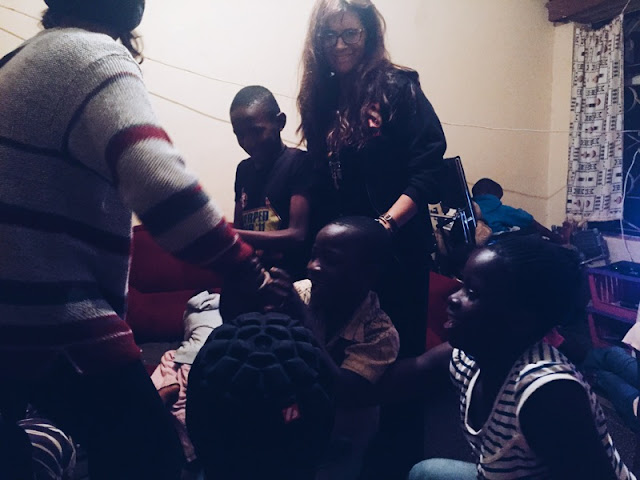 With a team in town, you know there's a full schedule. So I have quite a bit to tell you about. I'm hoping to post two a day until I catch up with myself, but that maybe setting myself up for failure...so, for now, I'll just say that the catch-up is coming soon.
Posted by Allison at 2:17 PM

These stories just get better and better! The car wash...the frisbees!...The licking of your neck! LOVE them all.
And you!