Having grown up in a small family, (it's just me and my younger brother) I never experienced the chaos of a Sunday morning as I've heard it told from families of five or more children...one child completely ready and sitting in the car while another has barely made it out of bed, always able to find the right shoe but never the left, everyone dressed and ready to walk out the door and someone throws up or runs back in to go to the bathroom or is forgotten at home in the absolute insanity and effort (though nearly always in vain) to get to church on time.

Fortunately, having never experienced this in my own childhood, it makes the experience of preparing a houseful of kids for church on Sunday mornings here hilarious (instead of stirring up unresolved childhood issues.)

This Sunday, I walked back to the bedroom to check on the progress of dressing everyone and saw that there was no adult in the room, just a bunch of children standing in their underwear, unable to reach clothing, or, if they could reach it, unable to dress themselves. (There were two house moms out this weekend at a family funeral, so we all took on a extra role or two.)

I grabbed some outfits for the girls (dresses, obviously the easiest choice...put them on over their heads and sent them to the living room for shoes.) Two down. Sammy joined me (praises!) I dressed one more kid, identified the two that needed new diapers before church, and headed out to hunt for matching shoes for the masses.

Meanwhile, the six that dressed themselves are standing outside the car chanting "Alice. Alice. Alice." waiting for me to come open the heavy and slightly broken car door. I grab Moses, throw on his high tops (which he points at about ten times with an excited squeal--still thrilled, weeks later, to have shoes to call his own) and carry him outside. I set him down by the car, he immediately falls to his knees and starts crawling, through the dirt, in his church clothes, to get to the car. I turn and exclaim, "Mose!" He stands up and walks the rest of the way to the car.

I swing the door open and begin to pick up and load small children into the back of the van. Three are immediately asking to sit in the front seat with me and Sammy, but today we've decided to take both Willie AND Suzie with us (upon my request) so they will sit up front and that ends that discussion.

I head back inside to put shoes on Suzie, but can only find one of them. A smaller kid finds the second under the couch, but two older boys think this is the time for a game of "keep away." Finally, one small girl grabs the shoe, rushes between the boys and hands it to me. I get the shoe on Suzie, walk her out and put her in the car.

We load Willie in to the front seat, in-between Suzie and the driver's seat and Sammy goes back inside to check for anyone we've left. In the meantime, Willie (who's now two people deep in the front seat) decides he's not going to church anymore and wants to get out. I climb out, unload Suzie (who grabs the steering wheel for dear life as if to say, "Are you kidding me? You always leave me behind...there's no way on earth I'm letting you do that today! Not after you undressed, redressed and loaded me in here. Uh-uh. Not happening.") So Willie climbs over her and out of the car. Sammy comes out the front door and asks what Willie's doing...he changes his mind and we go through that whole process again, trying to undo what he's just done by getting out of the car.

I put Suzie on my lap and close my door. Manu closes the sliding door and, just like that, we're off to church.

Yeah, this is all BEFORE the service.

We arrive, I unload Suzie (taking special care to hold her hand since she's a runner.) Willie slides out of the front seat, slams in to me and I almost topple over, still taking care to hold Suzie's hand so we both nearly fall over. Sammy comes around to the passenger side to count the kids as they exit the van, to ensure that we bring home everyone we brought to church.

Nineteen. She finishes counting and says, "Where's Willie?" And for a minute we all think, "How in the world did we lose a kid within 45 seconds of arriving?!" One of the bigger kids runs ahead and shouts, "He's here!" He'd run straight from the car and in to the church. Alright.

They find us some seats, we file in and I am considerably more ready for a nap than a two hour service...but we've only just begun. I plop Suzie on my lap and we settle in.

They dismiss the kids for Sunday School--even Willie heads out--and we're left with three adults and only two kids...granted, restless kids: Suzie and Moses, but still, only two.

I dug some dental floss out of my purse to keep Suzie occupied (she loves to wrap and re-wrap her fingers and toes with strings) and Moses walked three steps away from Sammy and then back to her for about half an hour. At one point, Suzie fell asleep. 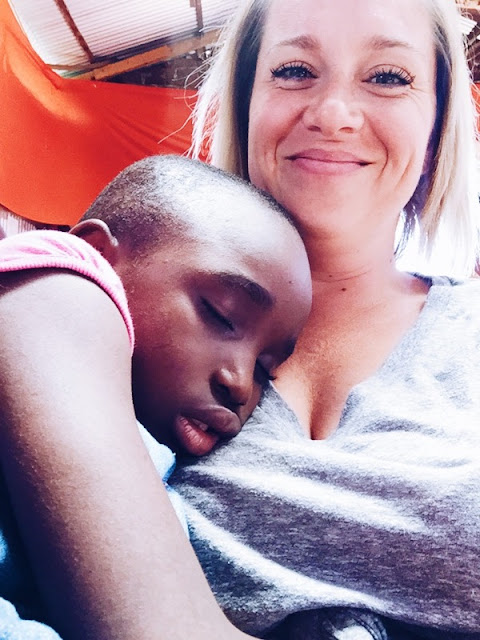 She woke up and we brought Moses over to hang out, thinking they might entertain each other. 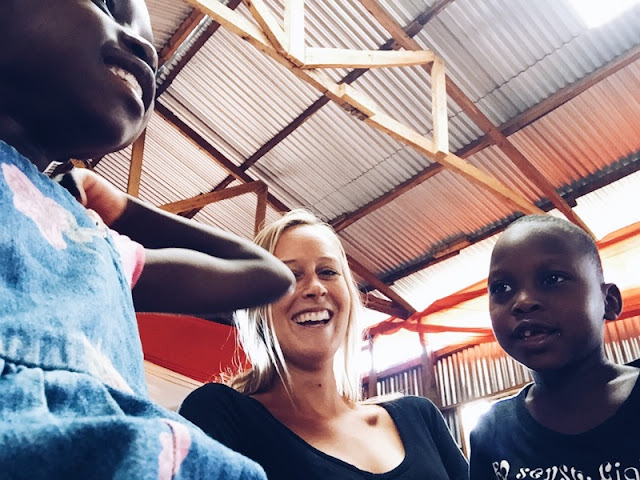 Obviously, he needed a little more entertaining than Suzie could provide. 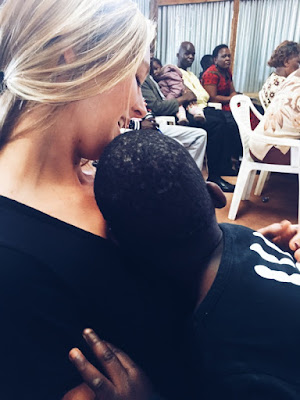 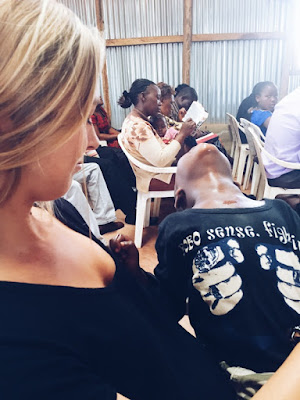 The speaker, mercifully, broke in to song halfway through his message, giving Suzie a dance break...wriggling out some of the pent-up energy she'd been forced to hold in for the first hour. 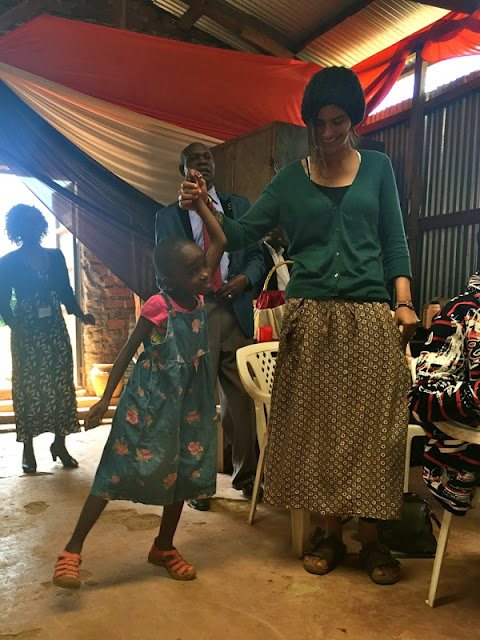 We loaded up all nineteen kids and began to drive home...only stopping once for Sammy to get out and move one crying child who was being squished by the bigger kids.

When we arrived back at the center, we were wiped out. We quickly ate lunch and headed home to relax. After a short nap, we took a trip to Kipsongo (a nearby slum) to check in on the progress of a few kids Sammy's been keeping an eye on. While we were there, it began to rain, but we still had to buy vegetables for this week's meals. So, we parked the car as close as we could to the market and, in the pouring rain, ran in to buy vegetables from my friend Rosemary. Success!

On the way back to the house, we found a large group of street boys walking back from a soccer game they'd been invited to join. Look at those sweet faces. 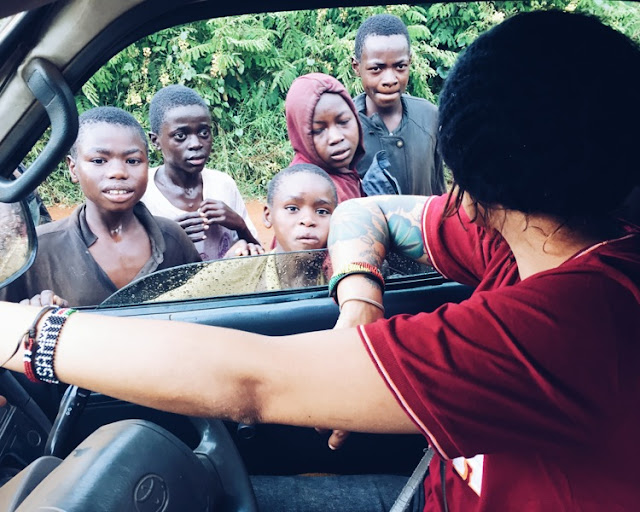 We dropped the vegetables, put on some warm, dry, comfy clothes and headed to Sunday dinner at the kids house. A bunch of cooped-up kids on a rainy night?! We were in for a treat! 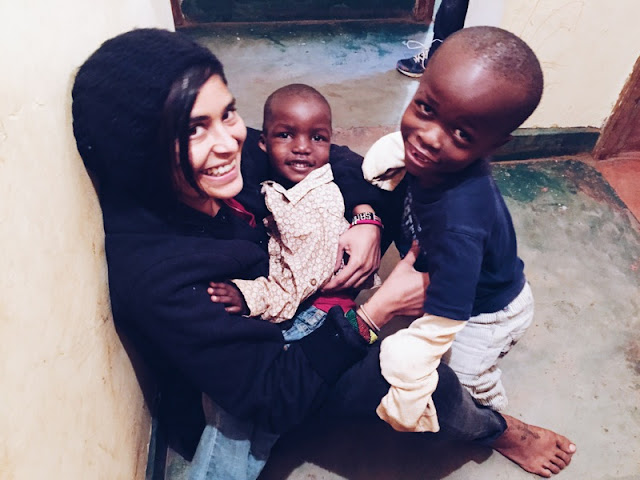 When dinner ended in a giant tickle fight, (Alright, I started it, but was knocked off the couch by the five or six kids who retaliated.) Sammy asked one of the big kids to put on a movie. Instead, he turned on some house music. The house erupted in a giant dance party! 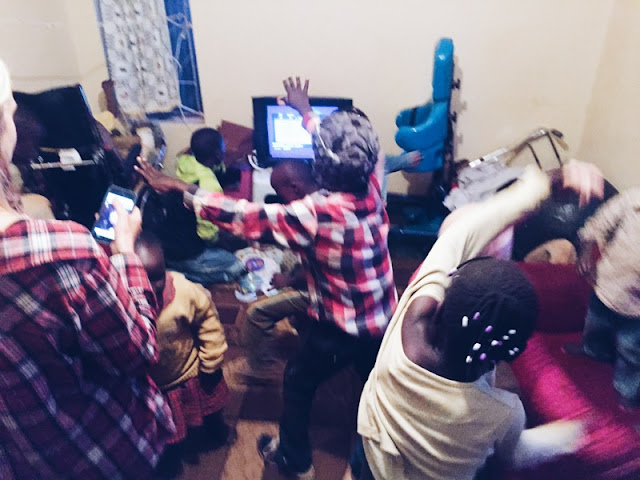 These two were stepped on in the madness, but recovered pretty quickly. 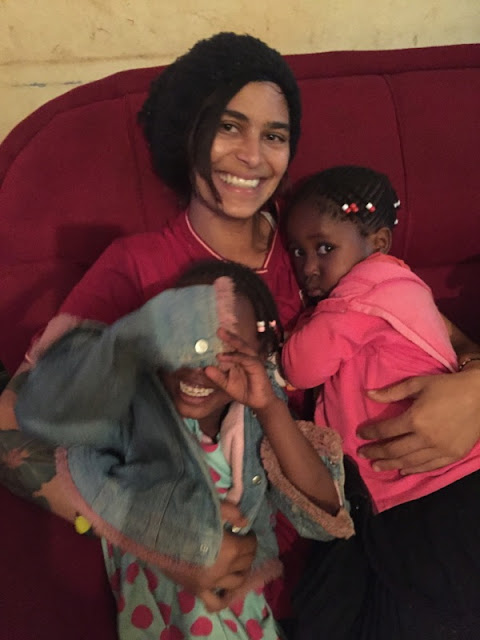 When the dance party wound down, the night ended with a viewing of 101 Dalmatians. Once the room was settled, we figured it was okay for us to leave.

We arrived home to a fresh batch of no-bake cookies (peanut butter, chocolate, oatmeal cookies!) which was the perfect ending to a memorable (and absolutely hilarious) day! 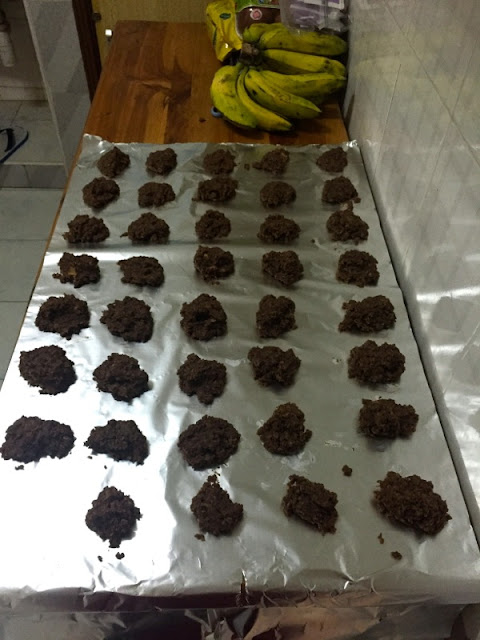 I love this so much! Sunday mornings were not very chaotic as you were growing up partially because I would lay out all your clothes and shoes and anything we needed to take with us--the night before. AND...because Daddy was sleeping! :)
I love the vision of the kids at church! I'm so very happy that I've been there and can truly picture it all!
LOVE that you're there with those kids...
LOVE you!