Well, here they are: the attendees of our first women's meeting. I promise they are much happier than they look...no one in this photo was forced to participate--aside from the babies, maybe. (And, for the record, I didn't enhance the glare on this picture; I tried to edit it down so you could see that there was a woman (and not an angel) sitting on the far right. 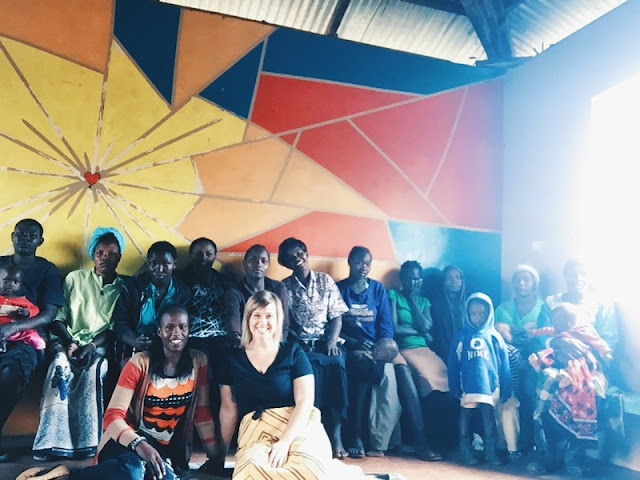 On Thursday morning of last week, I woke up with butterflies. The kind I equate with a 12-year old's birthday party: really excited that it's happening and a little nervous that no one will show up--or maybe worse, they'll show up and hate it--thinking through every detail: what will I say? what will they say? how will they leave it? will they want to be my friend once it's over? what if they are giggling about me in Swahili through the whole thing?

Well, the women did show up (minus a few who, I'm told, will make it next time.) And they did talk about me in Swahili quite a bit, but it was accompanied with the kind, child-like giggle that accompanies wonder and coloring and new friendship, not the mean teenage girl giggle that accompanies gossip and cruelty. (If you don't know the difference, watch a season or two of Pretty Little Liars.)

I was a little nervous about being late (and driving the car through town in case the police stop was up and they decided to detain me for a bit) so I paced around the center waiting for Phoebe (who was playing my friend/translator/critic/excuse-to-leave-if-things-ran-too-long that morning) to pay for water to be delivered and dole out the daily portions of rice, beans, and laundry soap.

We made it on time, but with no time to spare. And no drinks, since we had to skip our stop in town for time.

Well, the joke was on us--most of the women were at least 15 minutes late...and, upon arrival, visibly saddened by the lack of food or drink (the mark of any good meeting/party/Bible study in my opinion.) We'll get 'em next time.

I introduced myself, read a portion of Ephesians 3, and prayed for our time together. I told the women that my hope for the morning was just to become friends...to spend time getting to know each other (and for them to get to know me) and laughing and talking. Nothing heavy this first time around.

I passed out construction paper and crayons and asked each of them to write their names (a few needed help with this) and draw two pictures: one of their family and one of something they love.

I had made mine ahead of time, as a sample, so while they drew, I held this little guy. 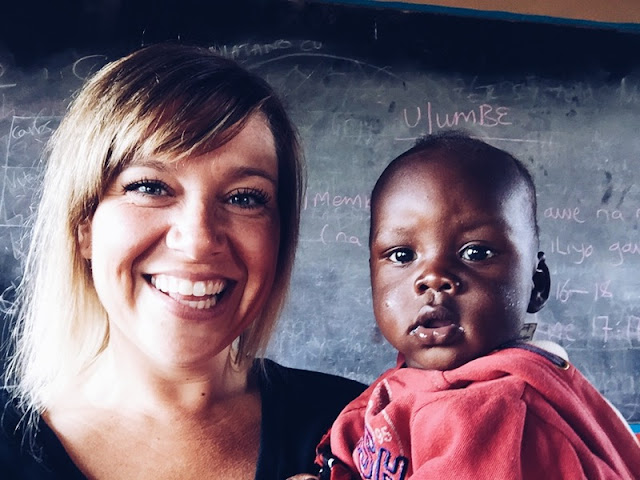 When they finished, I presented mine and then invited each woman up to do the same. 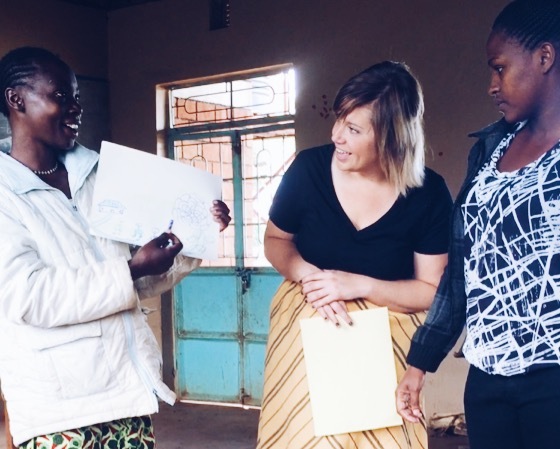 I took a picture of each woman holding her drawing, so I could work on names. (I thought I'd spare you twelve similar photos.) Most of the women had at least one child (I say 'had' because one of the mamas had drawn two babies and, when she explained her drawing, told me both had died.) and many of the women drew pictures to show that they love to sing and dance, and are very proud of their homes. (I told them we'll have a dance party at one of these meetings...it just seemed fitting.)

After we finished with the picture explanations, I brought out three bottles of nail polish and sat on the ground painting toes and fingers and chatting (As best I could in broken Swahili--and with a few women speaking mother tongue (tribal language) instead of Swahili.) One woman kept patting my head and telling me how soft my hair is. The nail painting took about half an hour, which meant we were done early...but I never want to just make up time filler to keep people longer, so I promised to be in-touch about our next meeting date and said goodbye.

Here's a shot of those women once more. Because now you know about the hour and a half leading up to this photo. Would you pick a face and spend a moment praying for her and her family...for all that God is doing in her heart and for her true identity--not as a mother or as a resident of a slum or, for some, a prostitute, but as a child of God--to feel more and more true to her?

After the meeting, I stopped at home in hopes of using the bathroom and grabbing a quick snack, but the lock was stuck and I couldn't get in. I tried, Phoebe tried, the groundskeeper tried...they brought out some oil and we all tried again. Nothing.

So, I went back to the center to figure out my next move.

While I waited, I asked Anet to remove my jigger. (Jiggers burrow in to your foot and lay egg sacks that can then burst and re-burrow...it's just as disgusting and itchy as it sounds.) Anet grabbed a needle and had that thing removed in under a minute, she then brought out a bottle of hydrogen peroxide and bandaged me up. She is so kind and patient and servant-hearted. And I'm so grateful that she would pick a big bug out of my dirty foot. (Sammy had said she's the best and most gentle during this process and she was right!) 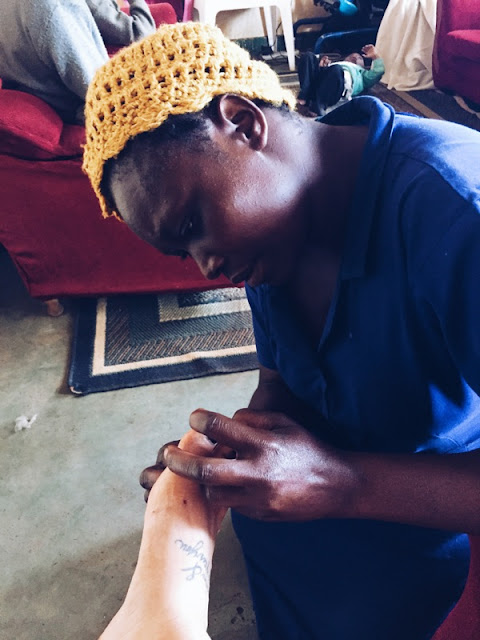 I called our landlord to see if he has a spare key, which he did not. So I waited around a bit longer, trying to decide what else to do. (I had been told there was no such thing as locksmiths in Kitale...turns out that was a lie.) 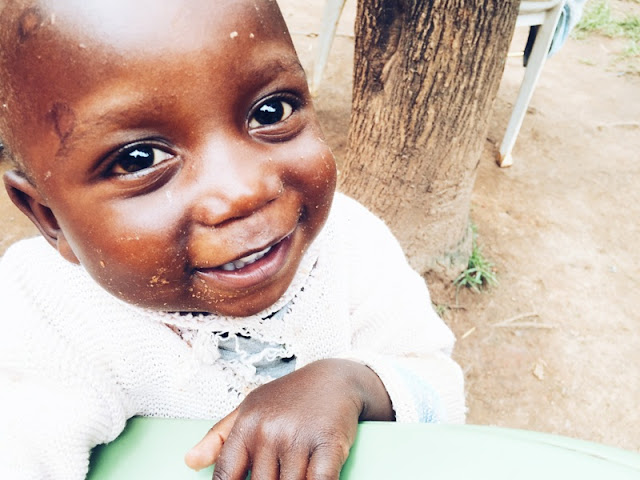 Phoebe and I went back to the house to try the lock again. Our landlord's wife came out to help, but also had no luck unlocking the door. Finally, our landlord came home, with the plumber, and together they jimmied a piece of glass out of the door, used my keys to unlock the inside lock and got us inside. They set to work on the toilet (since he is a plumber, after all) and I set to work covering the giant hole in the door to protect against a mosquito infestation that evening.

All the while, the neighbor boy sat in this chair telling me stories and making animal noises on command. He's really cute and we've become fast friends. 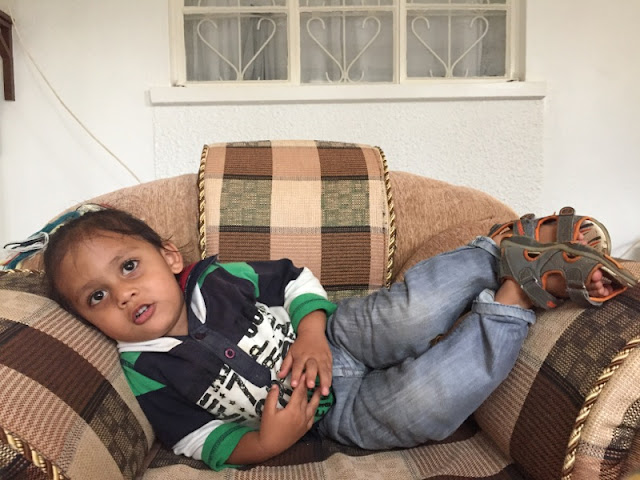 When the toilet was 'fixed' (it's still leaking) and the glass hole was patched, I went to drop Phoebe at the center and then head home to wait for the locksmith and glass repairman (both of whom came the next day instead.

Before I left the center, Marvelous caught me and asked to take her picture with her friends Zippee and Maureen, since she was leaving the next day to spend the month with a house mom in another part of town. 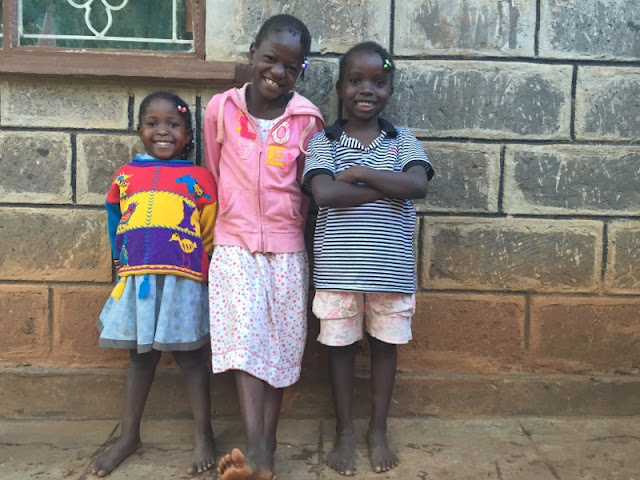 I made myself a delicious bowl of veggies for dinner, finished Bloodline and my book and then headed to sleep...grateful for a really great, adventure-packed day...AND grateful to have made it in to my house and be asleep in my own bed.
Posted by Allison at 11:12 PM