On Building: The Best Day, A Good Stir Fry, A New Women's Ministry, and A Children's Home

Here are my favorite photos from the last two days...there are a few dozen more on my facebook page, if you'd like to check them out.

This is Noah. Noah is in Class 1 at Precious Kids Center School. He's super sweet and also hardly ever stops talking. Yesterday, during break, he came up and, in Swahili, walked me through a day--how I ought to go about my day, really. "You wake up and then you go to the kitchen and then you make toast and then you put butter and then you put jam and then you drink tea and then you wash the cup..." All the way through an entire day. Oh, there was a stop at the grocery store in the mid-afternoon of the explanation, which included about a dozen items I should remember to purchase. It's either his voice or his delivery that made the whole ten minute spiel adorable and not at all annoying. 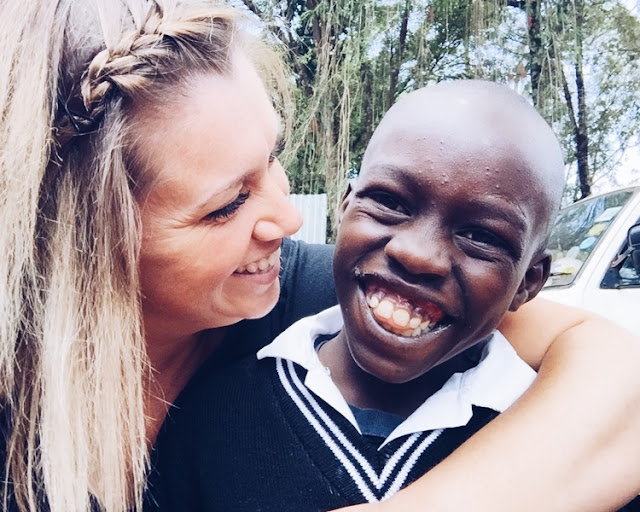 After lunch, I sat on the couch as a stream of kids came through to change clothes (and diapers) before going back to class. I caught a few on the way out the door for pictures. Moses, who typically looks confused in every photo, looked right at the camera and smiled...it's the small victories, folks. (Also, note the strands of drool all over us.) 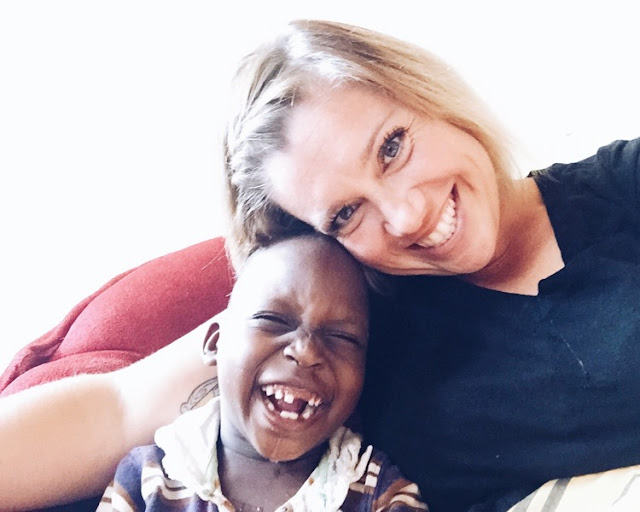 Oh man, Henry. When I met Henry last year, I got down to his level, looked him in the eye and asked his name. My mistake. He lunged (faster than I could react) and caught a chunk of my hair and held very, very tightly. I was rescued, but have kept a safe distance ever since. On Monday, I came out to find him spinning in circles around Sammy--with this look of immense joy on his face. It's clearly the best moment of his day, caught on film. 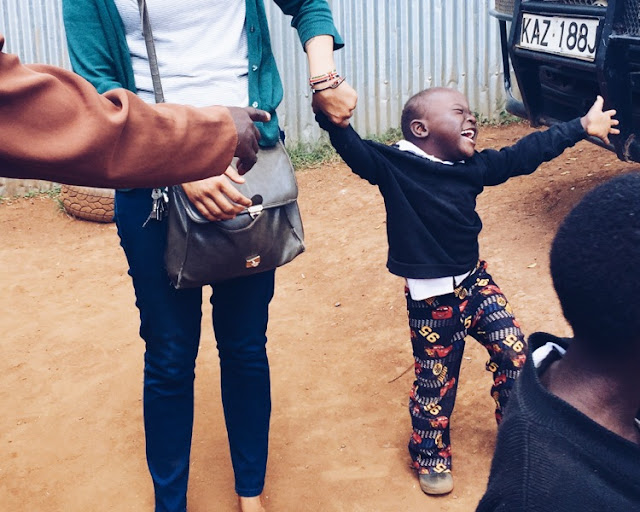 Monday afternoon--after about ten days of eating toast, beans, rice, and chicken nuggets (of course)--Sarah (who'd arrived on Sunday evening and whom you'll see in upcoming pictures) had the brilliant idea of buying a bunch of vegetables to cook as a semi-stir fry for dinner. So we headed over to the outdoor market to pick out half a dozen items (all for about $6!) This is the woman that sold them to us...we'll definitely be visiting her again soon! (Since then, we've made TWO pans of veggie stir-fry--one of which was turned in to a fried rice situation--with egg and soy sauce, but minus the rice. AND, I've made pans and pans of roasted garlic cloves--which is what dreams are made of.) 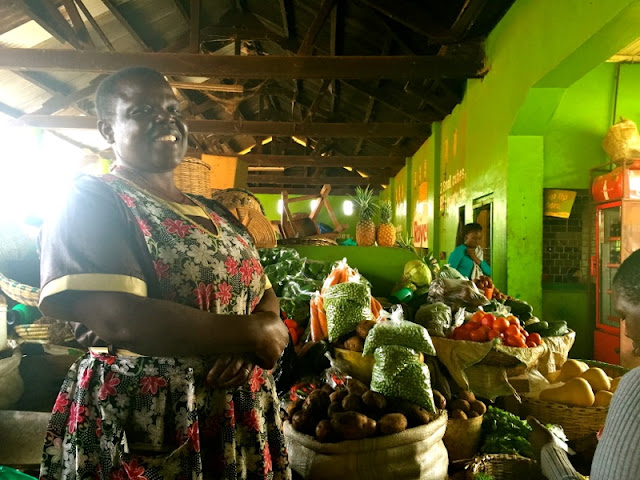 Tuesday morning, I snuck this picture of the baby class practicing their letters. I was hoping to go unseen (and refrain from distracting the entire class) but obviously the kid in the ski jacket spotted me. 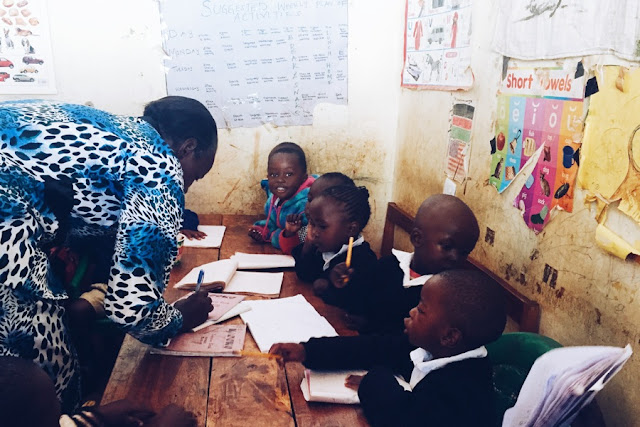 Yesterday, while in town running errands, Sammy got a call from Patricia, one of the women I am hoping to work with. (I'm still trying to figure out how to talk about what we're doing while maintaining a level of dignity and anonymity for the women we're working with...please bear with me as I test some things and learn as I go.) She's sort of the ringleader of that community of women--the one who'd told me when I was here in March that, if I started something, she would "bring so many women"--and had been asking Sammy when she and I could meet now that I'm back in town. So, we stopped by to say hello and arrange another time to meet up to begin setting plans in motion for the ministry. (Since then I've reached out to the anti-trafficking organization in Nairobi to begin our partnership AND been in contact with the founders of a church in that area, in effort to set-up a meeting with them...here we go!)

This is her sister Hellen. She's excited for what's to come, too. She also makes beautiful bracelets and necklaces out of paper beads, so we took Sarah (who is hiding in the shadows on the right of this picture) to shop for some souvenirs. 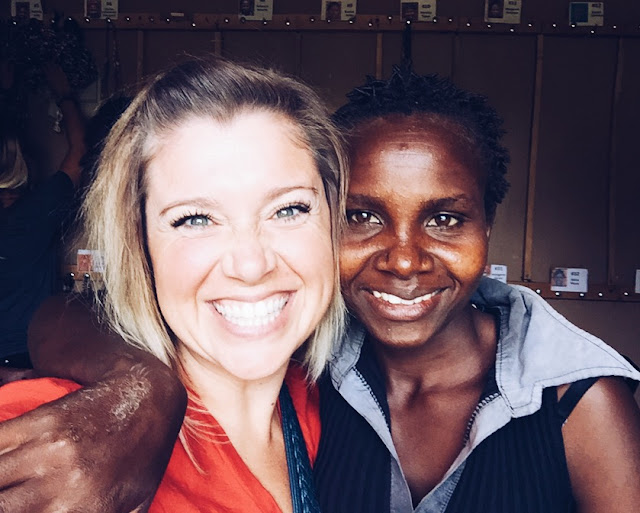 While we were in that slum, Sammy wanted to go by and check on a girl she'd met while I was here in February. This baby, Natasha, who struggles to breathe and can't hold up her own head, has been on Sammy's heart ever since they met. While we were there yesterday, we found out that Natasha's sixteen-year old mom had run off a few months ago...unable or unwilling to attempt to care for a child with special needs. The grandmother and this care-giver are doing their best to provide for Natasha and Sammy is prayerfully processing the best way to support them. We'll take her to see a doctor tomorrow to run a few more tests to try to gain a better understanding of her health and how we can be part of her growth and healing. 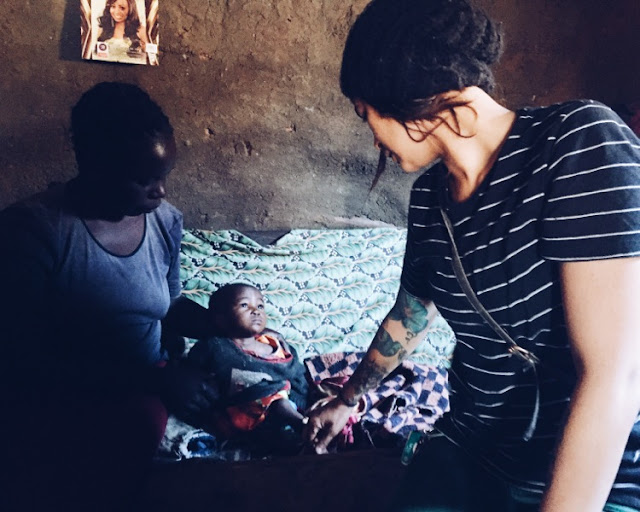 One of the parents came to pick up his kids from school yesterday in a van blasting music. Of course the noise drew all of the center kids out front and it rapidly became a dance party! There are so many good moves in this group of kids--lots of hip and booty shaking too, which always makes me laugh! 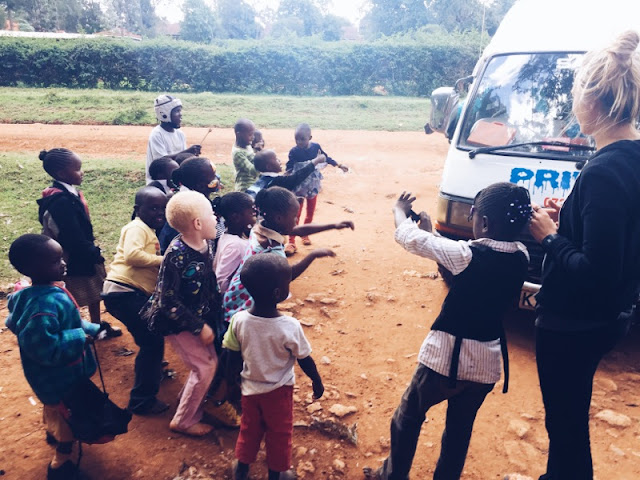 Based on how dirty he was, it appeared as though Moses had a really eventful afternoon. He was absolutely covered, from head to toe, in dust. 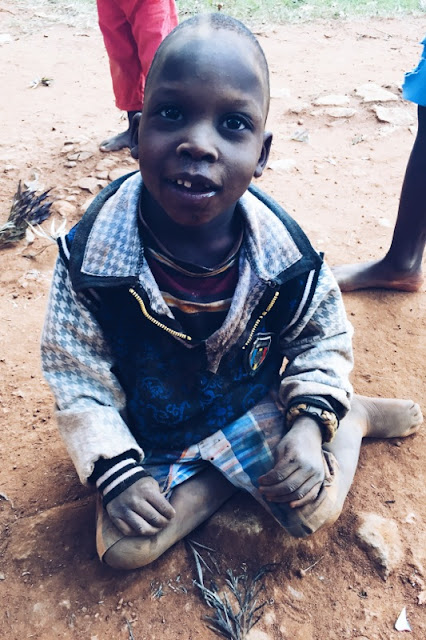 I did a little mending (well, one shirt was completely torn from armpit to waistline) on a couple items of clothing in the last few days. (Junior was so excited to see--and announce to the room--that those were his shorts I was working on.) But, last night, Suzie wanted some attention, too...this was our way of compromising. 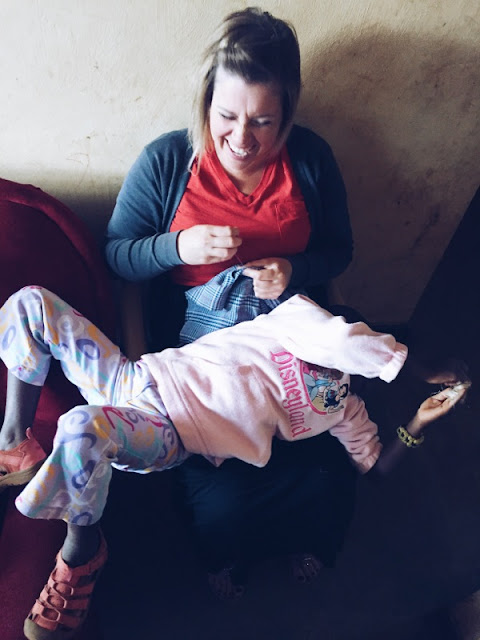 Finally, a team from Kansas, who'd come to visit the center earlier this week, joined us for a tour of the new, under-construction, Precious Kids Center. It's always such a treat to see the new location and hear people's awe as they realize how much more space there will be for everyone (and everything) that goes on at the center.

I hadn't been there since the roof was finished (they were aaaaalmost there when I left in March) so it was so fun to see one more huge step completed! 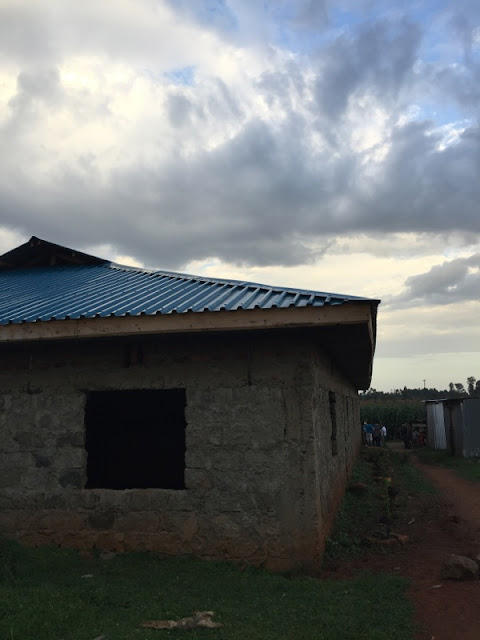 The team walked through the building and then back around to the front to pray over the property, for the construction, for the staff and kids that will live there, and for Sammy. The next step is windows, toilets/sinks, and then putting the cement on the interior walls. I am really excited to be here and watch as this home is completed. And I really can't wait to watch as the kids move and settle in to their new home!

I am so very glad that I taught you how to sew! I hope you used the correct color thread!