A few weeks ago, I called the Pastor of Elevation Centre Church and his wife, Angela, to see if they would like to choose three mamas who are involved in the church to be part of this business project. I believe in the power of the local church. And I believe each church ought to reach out and care for the people in her community. So I offered to assist this church in showing support to three women they love and believe in. (This is the same church that graciously hosted the Women's Event and, on the Sundays we can get our act together--and have no sick children--it's also where we attend service.)

On Monday, five teenagers and I picked up Angela and visited the three mamas they'd chosen. {And then I added one of the mamas from the worship team that I like so much, and they added one more whose husband is very involved, in hopes that this gesture by the church will show this woman that she is loved and welcomed in their community.} You'll hear a little more about these visits as we continue.

Thanks to the help of those same teenagers, and Mike and Ben--who have been so incredibly gracious when it comes to helping with these crazy heavy pieces of new businesses: charcoal, sacks of beans and maize, etc--all of the items were purchased and packed-up for today's deliveries.


And with that, here's a little story about our Saturday morning.

It all began with a very full van.

The plan for today, was to pick up Angela and make the rounds to deliver the goods. By 8:00 this morning, everything had been carefully counted and stuffed in to the van...along with a few eager-to-help teenagers. (Can you see Lucy's plaid jacket in the backseat? She ended up climbing in and out through the window.) 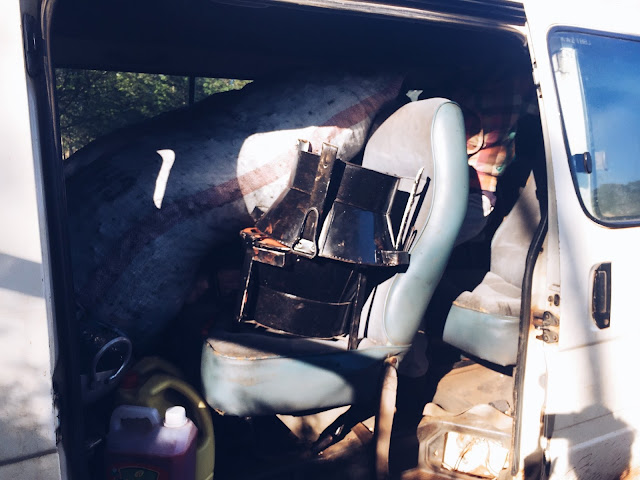 We arrived at the church on time and ready to go! I thought you may like to see a photo of me driving the van that Sammy has graciously been allowing me to use as I run all of these errands. 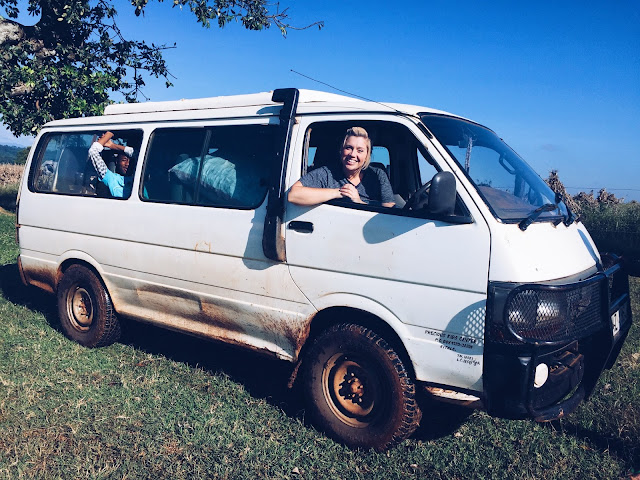 Okay...here's the really fun part! Meeting these five mamas! (I have been waiting to introduce you until I had the delivery stories to go along with it!) Here we go...

Mama #1: Elizabeth
Elizabeth and her husband have five children. They live in a one-room home and struggle to make ends meet each month. Her husband is a motorcycle taxi driver, but one salary doesn't quite cover the costs of living. Elizabeth is very involved at Elevation Centre Church and is always so warm and inviting when we arrive on Sundays. (I know the sun is making it difficult to see her face, but keep scrolling, there's a good one coming! Also, the baby she is holding closed his eyes the entire time I was in his house--he was so terrified he couldn't even look at me!)

Elizabeth told me she'd like to sell things from her home: charcoal and assorted vegetables. This way, she can stay home with the children, but also have a little income for the family. 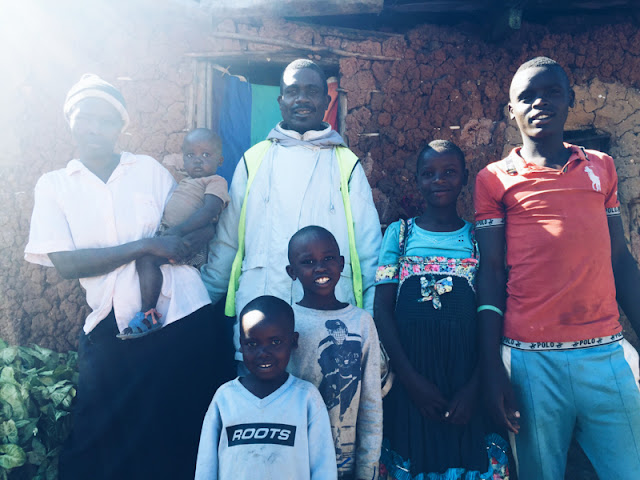 Mama #2: Fanny
Fanny's story is very different from Elizabeth's. Earlier this year, two of Fanny's children passed away and, after their deaths, her husband kicked her out of the house. She took her remaining son and moved in with her mother, who, due to a stroke, has no use of her right-side. Fanny works very hard to keep the house clean and all three of them fed, but is still healing from the trauma of this year and, has yet to find permanent employment near her new home.

Fanny told me she's always had the dream of owning a small shop that sells second-hand clothes. She'd like to sell anything from baby clothes to winter coats. As I looked in to the clothing business, I found that it was a little more expensive than we'd been budgeting for each woman. I spoke with Angela and we decided to give Fanny an in-home store like Elizabeth's where she can sell items and begin to save up the capital to launch a clothing shop in the future.

And so, this morning, we brought beans, maize, and charcoal to Elizabeth and Fanny. They live on opposite sides of the same neighborhood, so they won't be in competition with one another, but we could make the drop at one spot.


Fanny in the green and Elizabeth in the orange {...with the baby who, once again, screamed in fear when I said hello.} 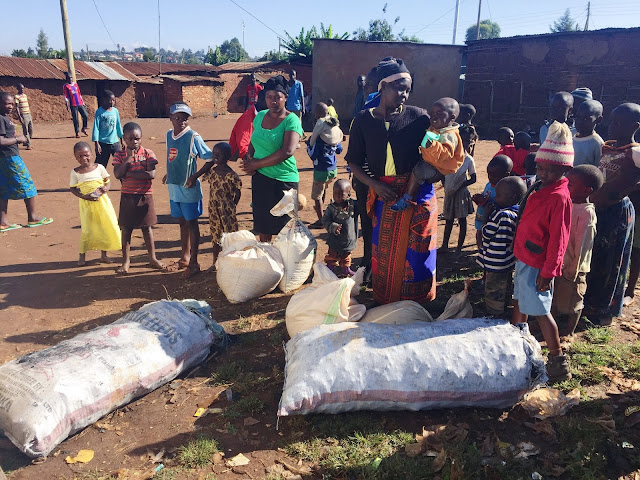 Fanny and Elizabeth with Angela {our pastor's wife} 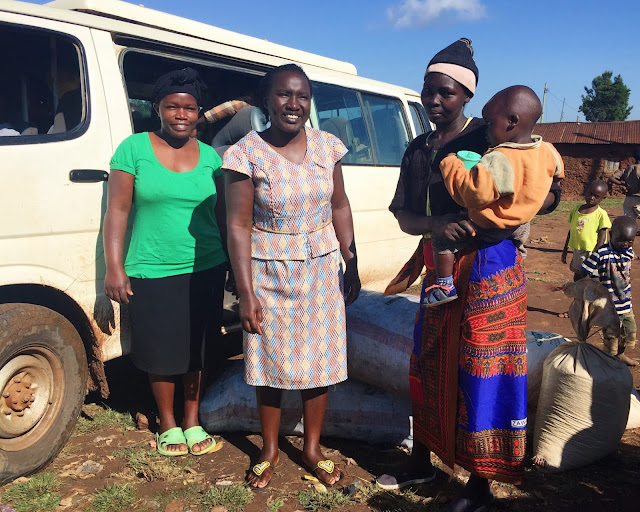 Elizabeth hugged me and thanked me and then pretended to kiss me on the mouth in gratitude, {Fanny was equally as appreciative, but a little less demonstrative} so I made sure to get a photo with them, too. 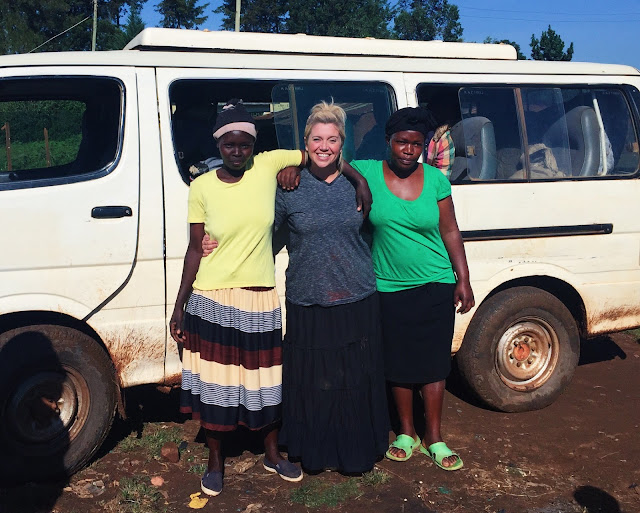 Family #3: Rosalyn
Rosalyn is a single-mother of four. The kids seem healthy and happy, which speaks volumes about this mother who is doing all of this on her own, but I am so glad to have the opportunity to give her a small, financial boost.

She, too, told me that she would like to run a small shop on the roadside, since they live very close to a road with a lot of foot traffic. Unsure of which vegetables sell best in her community, we settled on beans, maize, and charcoal--like Elizabeth and Fanny--to get her started. 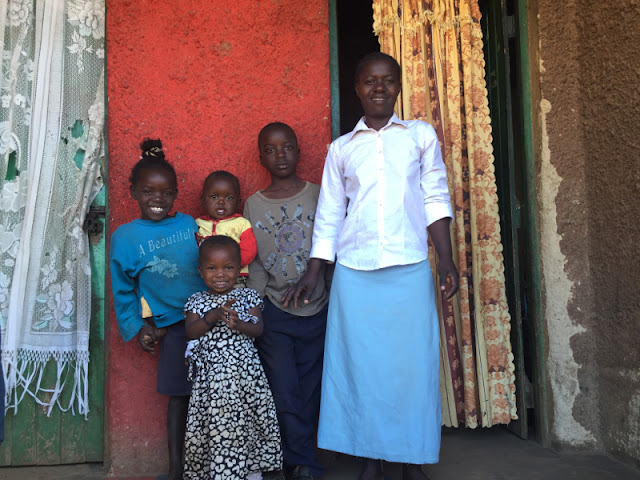 By the way, how cute is little Marion?! I had seen her singing with the kids in church last Sunday and mentioned to Sammy that she was adorable. I was so excited to jump out of the van and be greeted by the same sweet face the next morning. She shook my hand, told me her name was Marion and she's eight years old and in second grade. {Today she told me she's five, so at least we're getting a little closer to the truth!} 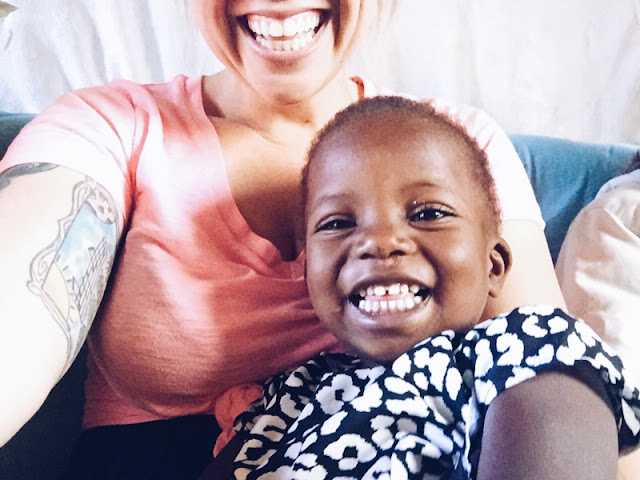 This morning, hers was the first voice I heard when we arrived in her compound. {They live in an apartment-type set-up: several smaller homes, connected to one another, with a large grass field in the middle. Both times we've visited there have been about a dozen kids playing together outside.}

Marion and her mama Rosalyn during our drop-off this morning. 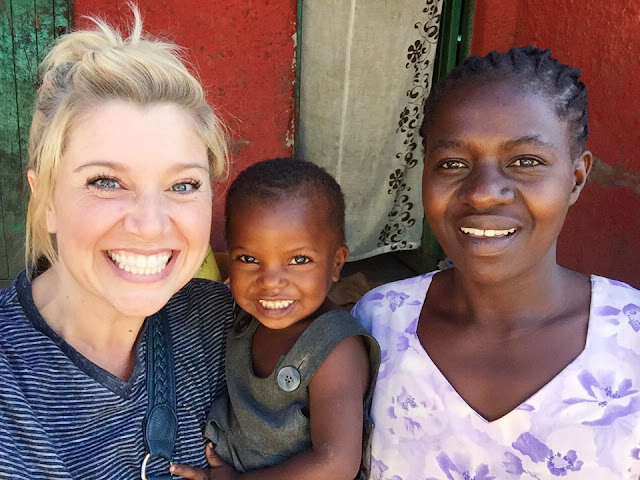 I carried Marion to the house while the boys carried the charcoal. When I set her on the front step, Frank picked her up and set her atop the bag of charcoal. She beamed with pride at the center of the picture. 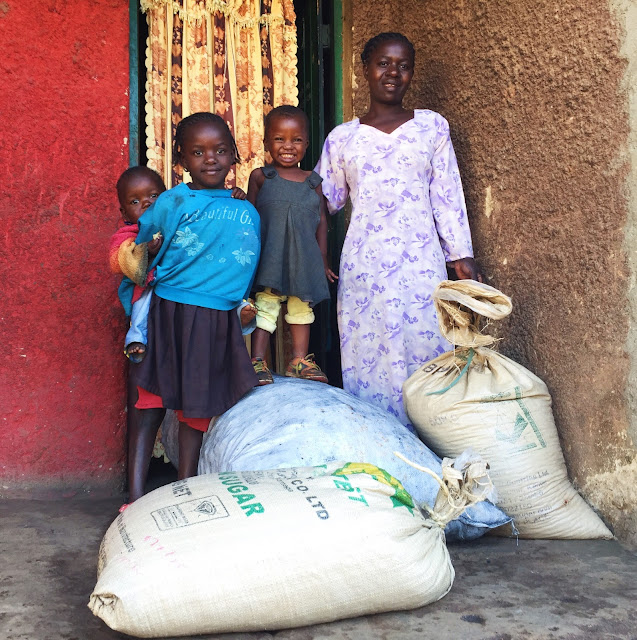 Mama #4: Veronica
Okay, so Veronica was my choice. She and her sister, Betty, had stopped me after the women's event at the church and chatted with me about my time in Kenya and my intermediate Swahili--then her younger son, who was once afraid of me, gave me a kiss on the cheek--and, since then, we've been friends.

Veronica currently does odd jobs to make a bit of money for rent and food for her and her two sons. She told me that she used to run a fried fish stand with her mother until business went down and her mother told her to move and figure things out on her own. Since she knows that business well--and enjoys it--she told me she'd like to have the equipment to start up a fried fish stand near her own home. 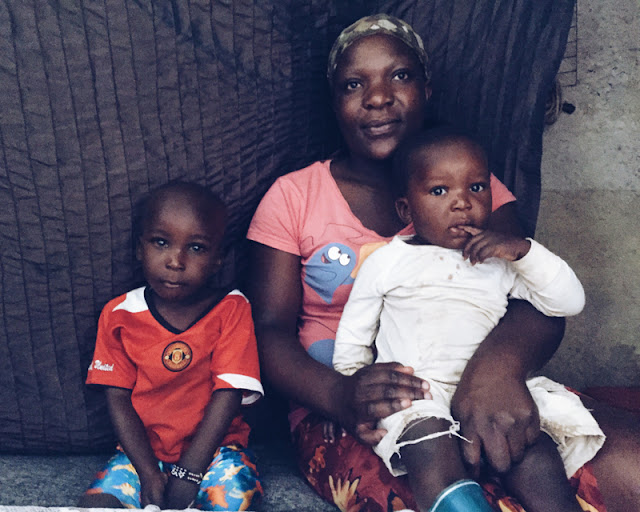 Today, we brought her all the things she needs to get the fish business up-and-running. {Except for the fish, but she assured me she knows where to buy them at a good price!} Her home was too dark for a photo with the items, but Angela promised to stop by in a few weeks and take a picture of her frying fish for customers! 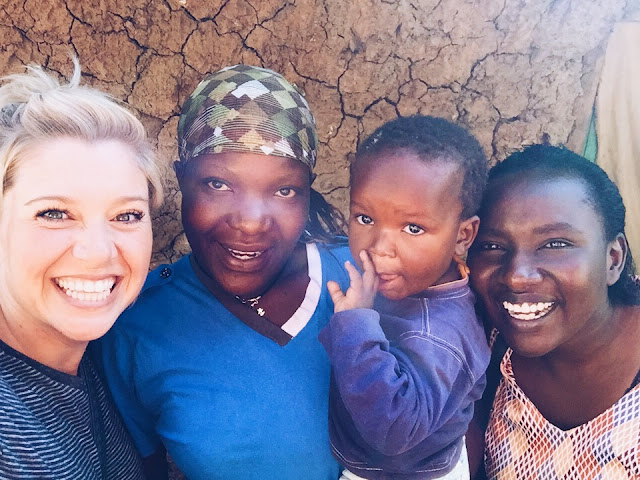 Mama #5: Becky
Becky and her husband C.O.G {Child of God} live with their two children in Kispongo slum--very near to the water source and community garden. I have seen C.O.G rap in church a few times, but I had not met Becky until Monday morning.

She was very soft-spoken, but told me that she used to run a stand where she made french fries before she fell upon some hard times and couldn't afford to purchase the supplies {potatoes, oil, and charcoal} to keep it going. Much like Veronica, she said she knows and loves that business and would like to start it up again. 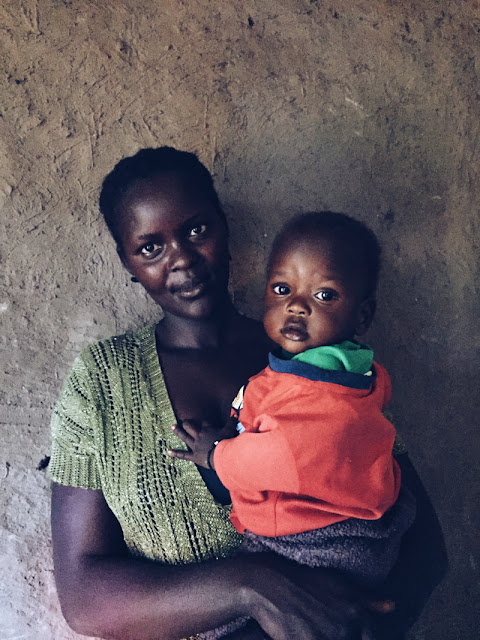 This morning, we dropped off everything she would need to make this happen! When we pulled up, she greeted us with a big smile. She called a friend to help carry the huge bag of charcoal to her house and, excitedly, said she'd see me in church tomorrow. I am really looking forward to eating some 'chips' from her stand sometime! 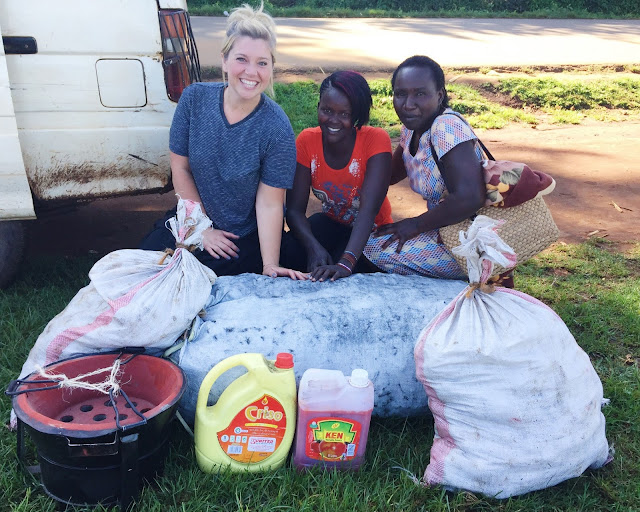 Angela runs a pharmacy just outside of town, so she had to get to work. We thanked her for orchestrating all of this {and with such efficiency!} as we dropped her at the public transportation center.

In celebration of all of their hard work--and the fact that it was all finished within an hour--I took my friends {who had seen this entire process from start to finish: house visits, purchases, and deliveries} out for breakfast: samosas, chapati, fried eggs...and one strawberry milkshake. 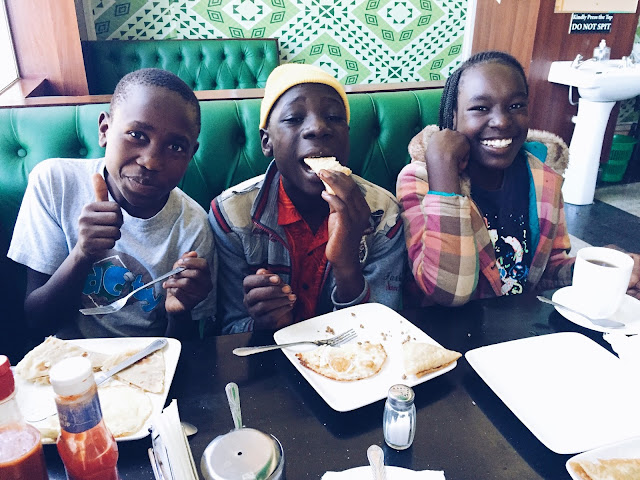 Hillary was not as excited about having his picture taken... 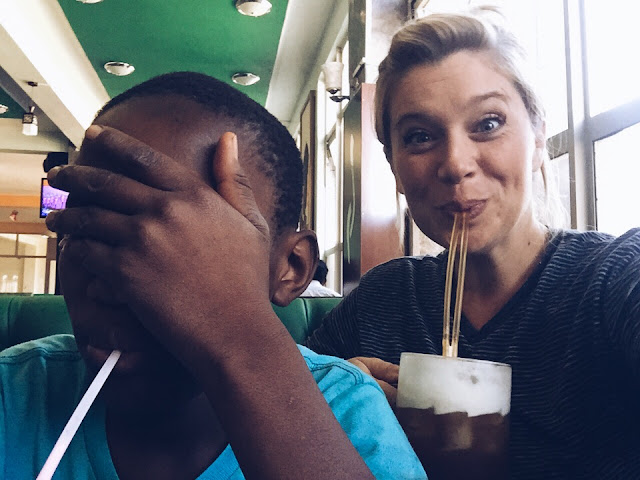 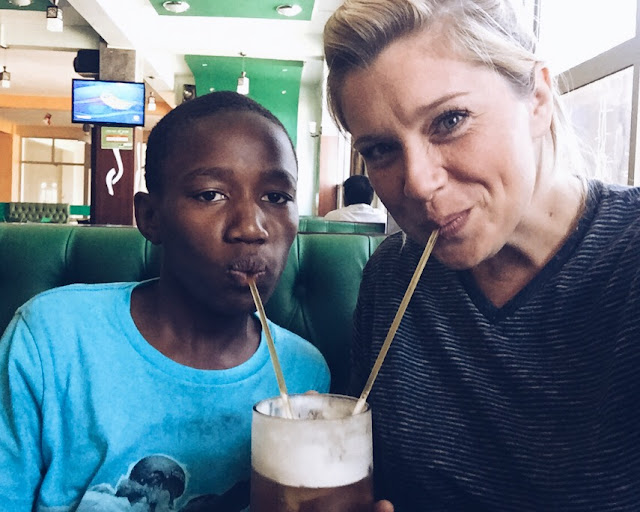 We headed home with full hearts and an empty van.

I know I have said this so many times, but thank you, thank you, thank you, for your generosity. I am so grateful that I have had the opportunity to help these amazing parents kick-off their business dreams here in Kitale. And, today, I was especially thankful to witness the giving hearts of these kids as they, willingly(!) woke up early on a Saturday morning and hopped in and out of the van to shuttle heavy bags from the car into the homes of strangers. Sammy is modeling a life of service and self-sacrifice...and they are following her example well.
Posted by Allison at 8:14 AM

AMAZING and fantastic!! Using your gifts and talents to make the world run a little smoother and make people feel SO good!
I love you. (And Marion is adorable!)