I moved to Kenya with the dream of running women's events in local slums. My desire was to help educate women on the realities and dangers of human trafficking. In the last few months, several new projects have come up to help expand my view of human trafficking prevention, but I never lost sight of my initial objective.

And, finally, last Saturday, that dream became reality with our first women's workshop in Kitale!

In partnership with HAARTKenya, and with the support of Elevation Centre Church, my friend Susan {a trained counselor and event planner!}, and my friend Bre {who planned her visit to Kitale around the date of the event}, we hosted, what I'm hoping will be, the first of many women's events at a local church.

Though we had originally planned to fill the church, {shooting for about 200 women} we were told that the workshops generally work better when they are smaller, so attendees can feel comfortable to ask questions, and participate in more of a discussion. They were absolutely right!

Bre and I did all of the shopping in the week leading up the event: ingredients for tea and mandazi for about 50 women, plastic cups, trays and other cooking supplies. The church that hosted the event will open its children's home at the end of this month, so I was so happy to buy a little too much of everything to leave behind in appreciation for opening their doors, inviting their congregation, and helping us to bring awareness to this community of women--not to mention helping us borrow a projector and laptop for the day!

And, finally, the day arrived!

Early Saturday morning, Bre and I headed over to meet the Pastor and his family to set-up for a 9:30am start time. We made a welcome sign, put out the flyers and a sign-in sheet, and worked to set-up the projector {which never worked.} 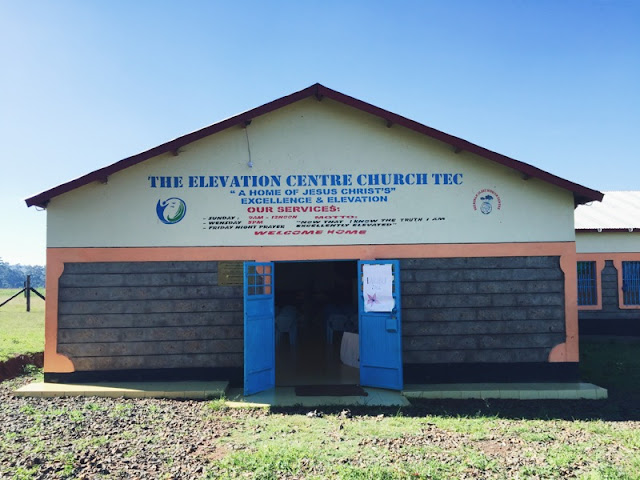 Around the same time, these two women arrived to begin preparing the refreshments. They fried about 100 mandazi in that pan of oil, over three hot rocks. And, let me tell you, those mandazi were tasty! 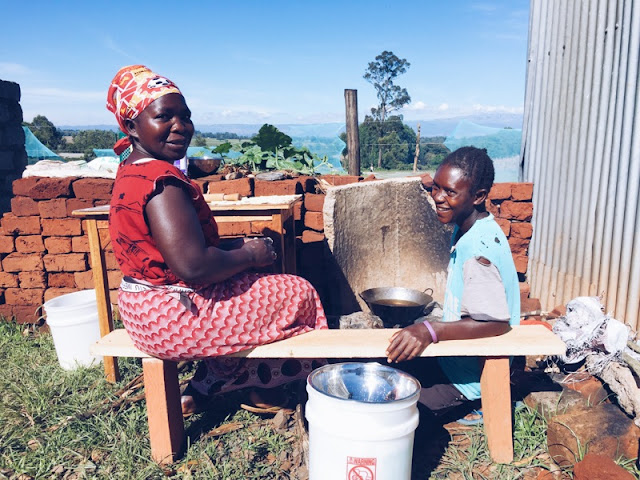 Around 10, there were only a handful of women in the church, so I called my friend Patricia to see when she might be arriving with her group of 15 friends. She said they were waiting on a few more mamas, but would be on their way soon.

Around 11, the last women strolled in to the church and we began. {Several people laughed at me for assuming we'd be started anywhere before 11. They said, "African time, dear!"}

With just about 40 women in the room, our friend Hannah, from HAARTKenya--who speaks with great passion as a trafficking survivor herself!--led the group in a discussion about the existence of human trafficking, {when it was asked if anyone had heard the term before, no one in the room raised her hand} different types of human trafficking, and ways to ensure safe travel {and return} in the future. During the presentation, the women asked great questions and even made a few jokes here and there, showing they were comfortable enough to let down their guards and be sure to fully understand all that Hannah was sharing. 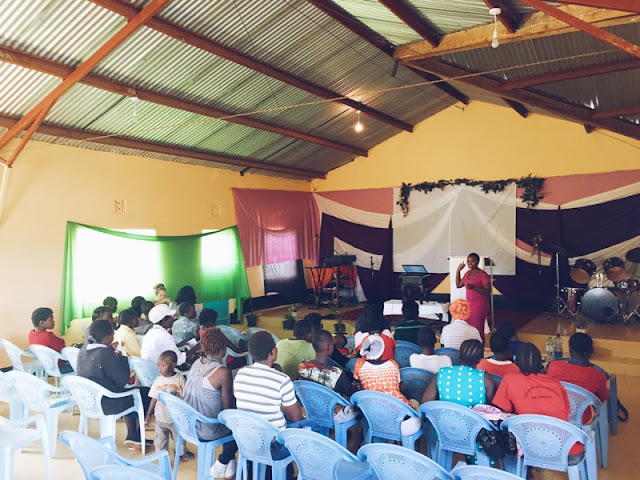 HAARTKenya also provided two videos that display different forms of human trafficking. It was amazing to hear the women sigh with exasperation or cluck in shock and disapproval {or disbelief} about what was happening in the films. It was a great sign that they were really engaged and learning. {Note the laptop perched atop those stacked tables--that's how we showed the videos after giving up hope of making the projector work.} 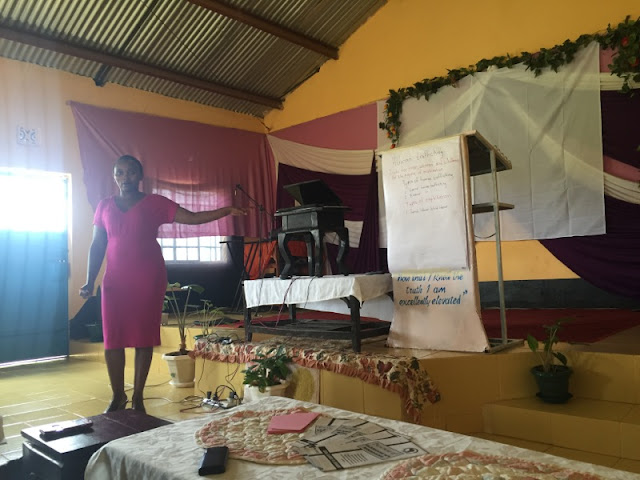 Mid-workshop, I received a text from Sammy {who had taken a pair of brothers to visit their sick mother} saying the Mama they had been visiting told her about many of her neighborhood friends who helped their daughters take jobs as house help in Saudi Arabia and have never heard from them again. So, there is already an obvious need for a second workshop.

We finished the morning with both an invitation to stay for hot refreshments now and return to the church for service the next morning.

These are my friends, Hellen, with her daughter Melody, and sister Patricia. They sat next to me during the event, asked great questions and even asked me for paper to take notes. As I passed out brochures with basic information about trafficking and a contact for HAARTKenya for future use, Patricia asked if she could take a few extras for her neighbors who also need to learn about this. Their other sister has been trafficked to Northern Kenya at least twice. {I've read on multiple sites that those who have been trafficked once are likely to be trafficked again...yet another reason education is so important! And why HAARTKenya also educates on safe travel and return.} 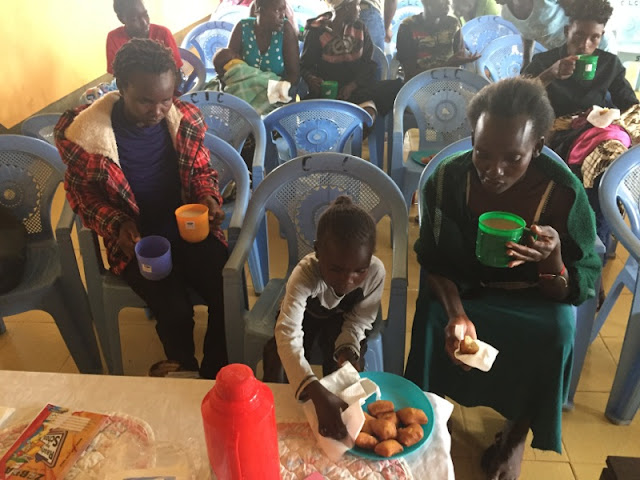 As I packed up the supplies and thanked those who had given their morning to help, I was stopped by these two sisters: Betty and Veronica. {Seriously!} Betty is one of the worship leaders at the church, so we recognized each other. They were standing outside, listening to me chat in Swahili with some of the other attendees, impressed with what I've picked up in the last few months and laughing a bit as I fumbled through a couple of sentences.

They wanted to introduce themselves and hear how I'd learned the language. I wanted to say hello to little Ezra--who had burst in to tears when I made eye contact with him in church last month, but seemed to be a little less terrified this time. They were so kind about the event {and my new Swahili} and helpful with clean-up. 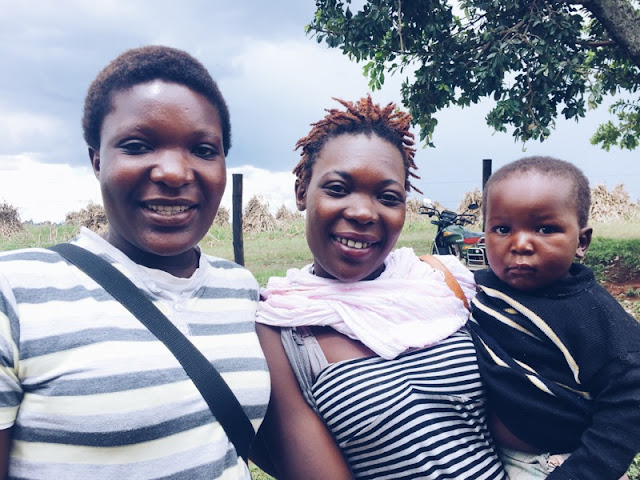 When I walked back inside, Ezra followed me. I knelt down and he walked right over and climbed in to my arms! 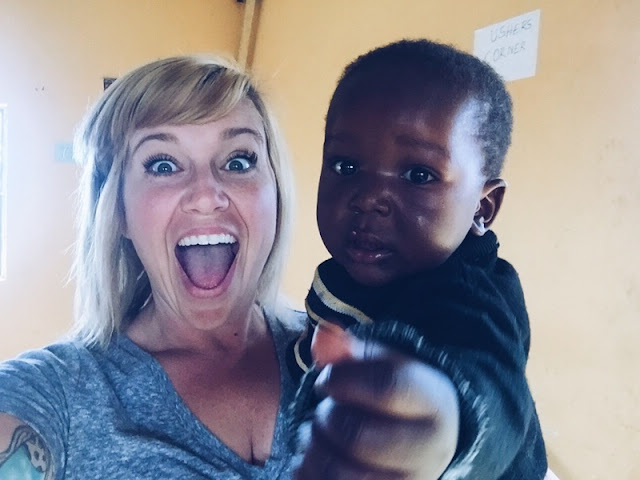 Upon his mom's prompting, he even gave me a kiss on the cheek! 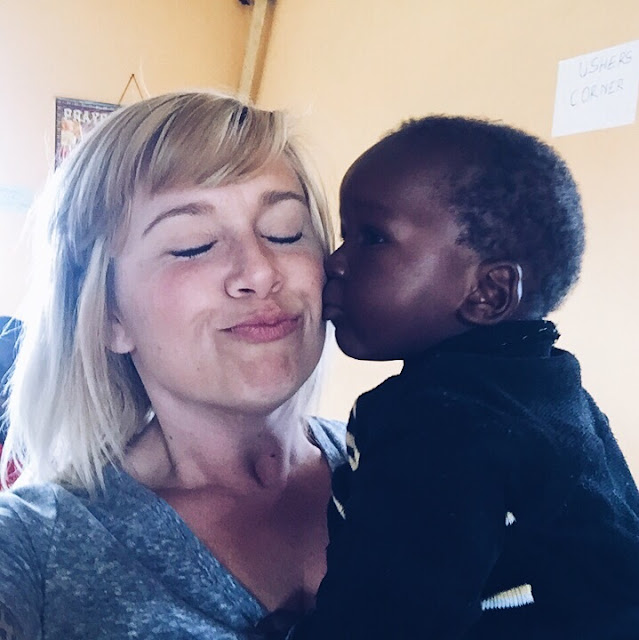 I said my goodbyes, and another round of thank yous before packing up the van. I had invited both Hannah and my friend Susan for lunch in town, so we went to my favorite place: Ruby Deli. We sat with Bre, Centrine {the girl she's been sponsoring for years} and Violet {Centrine's adoptive mom.} 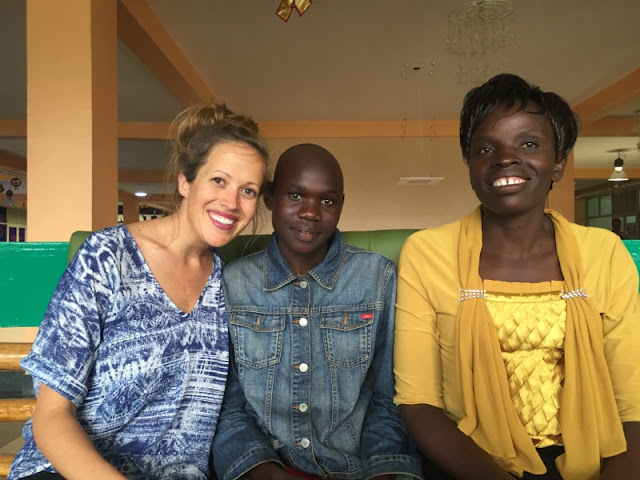 During lunch, we debriefed the morning and gave Susan a chance to ask Hannah more specific questions about trafficking, follow-up, and prevention, since she will be running our next event{!!!} There is no set plan, but we are all excited about the potential for future workshops in and around our town.

I am so grateful for the prayers and support of friends and family as this event has gone from a dream, to a plan, to a reality. The Pastor's wife, Angela, sent me a text yesterday saying they've already heard so many great testimonies from the morning! I can't wait to share those stories with you as well!
Posted by Allison at 10:12 PM

AMAZING!!! How fabulous!! You are making SUCH a difference!!

Congratulations! It must be so rewarding to be able to educate on this!! You DO make a difference!