A Home Of Their Own

In 2009, there were a group of about 10 street boys sleeping in the Oasis of Hope center each night. Several of these boys found small amounts of money, here and there, to pay fees at the local public school and continue their education. In the years since Oasis closed, several returned home to Northern Kenya, others returned to the street. But, two of them: Jackson and Paul, continued to fight for an education in Kitale and, amazingly, completed their Form Four exams at the beginning of this month!

During the last five years, they have slept in small bedrooms on properties belonging to friends and teachers, scraping together food from whomever would share, doing odd jobs on weekends to get money to mend clothing or replace uniforms. In the last two years, Alan--an AIDS orphan who attends the same secondary school and has just completed Form Two--moved in with them to share the load. All the while, thankfully, the school allowed them to continue without any guarantees of school fees.

And here they are! Alan, Paul, and Jackson. Behind them is the house they've been staying in for the last school year. I had originally approached them about beginning a small farm beside this house to help ease the transition from student to adult, but when they asked the teacher {who owns the property} for permission, she told them she wanted them to move out once school closed. 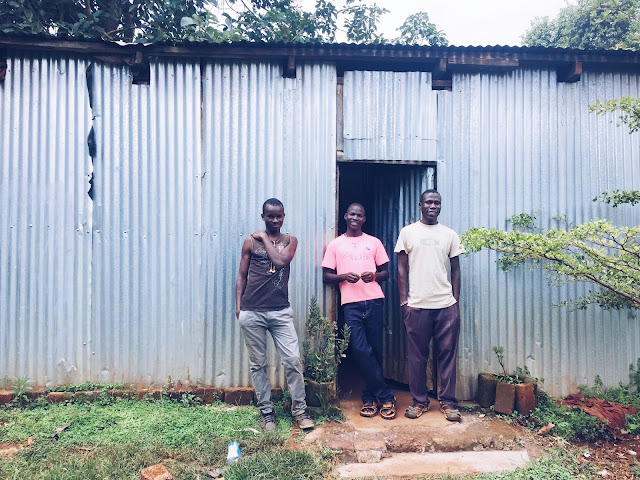 About a week later, another of my favorite former street boys who had lived with them on the Oasis compound, P.I.G {a self-given nickname that stands for Peter Is Great} moved back to Kitale from his hometown in Northern Kenya. Given that the boys have lived together in the past, it seemed like the logical decision would be to find a new place for all four of them.

Early last week, I asked Mike to walk through the local slum in search of an affordable house. One that would be close enough to the school so Alan could continue his education, with a small plot of land for them to do some farming, and with a rent that was inexpensive enough so that, in six months, they can begin to pay the rent themselves. {The rent on this home is less than $8 each month, so it should be manageable once they get their feet under them.}

Augustus {on the right} had gone to check for the house with Mike, so he is, now, incredibly invested in this project. He excitedly jumped in the van when he heard we were going to pay the first month's rent for the house. Manu, in the middle, loves to come along on afternoon tasks, but is not nearly as crazy about having his picture taken. 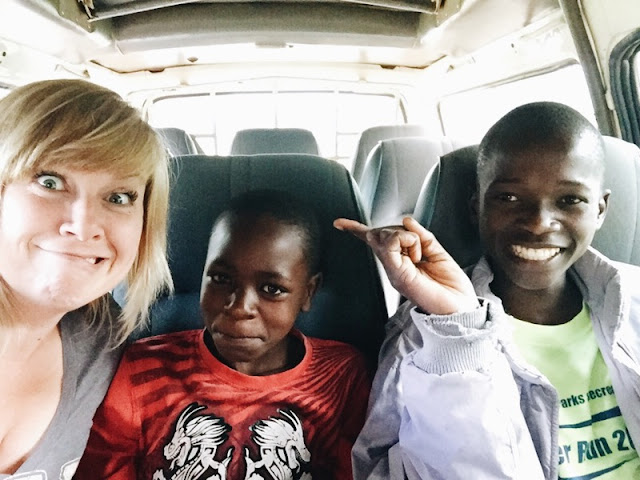 This is it! It's a bit small, but it's theirs! And there is no longer a deadline hanging over their heads. 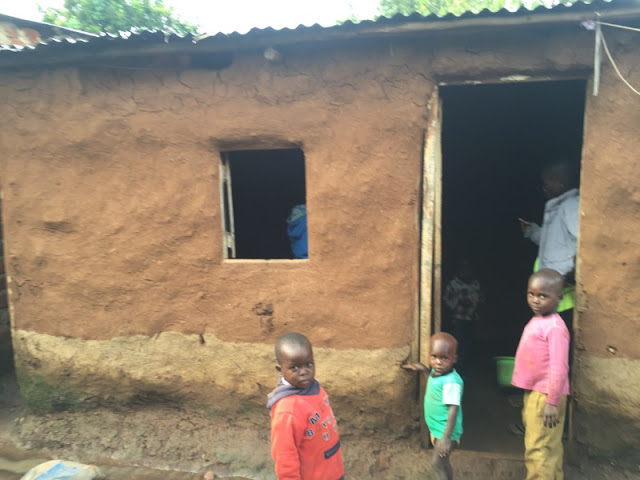 Their home is attached to another, where the property caretaker lives with her family. To the left of this building, there is also a small farm. The woman who rented us the house agreed to let the boys plant in one-third of the space with no additional cost! So, with a small tin of seeds, the boys can begin to plant vegetables which should provide some additional income and alleviate some of their food costs. 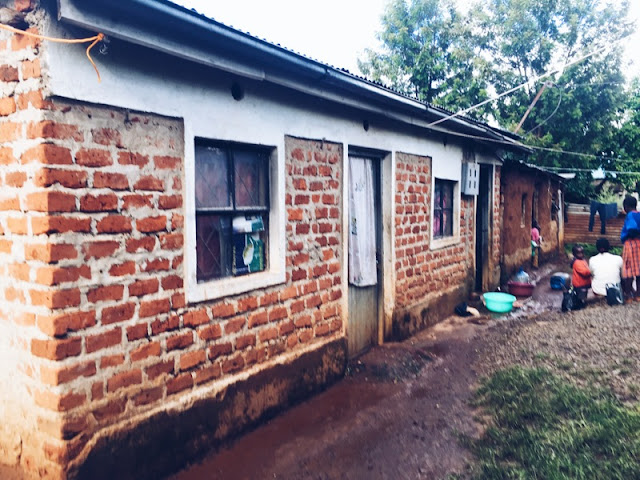 The afternoon Bre and I went to see the place {and pay the first month's rent} had been so rainy that it took us about ten minutes to climb down the rocky stairs. {We had just made it to the bottom of the steps when the boys we were with had already crossed the bridge...we're not all that accustomed to slippery, muddy, rocky steps!} This was our "we made it back across!" celebration photo. 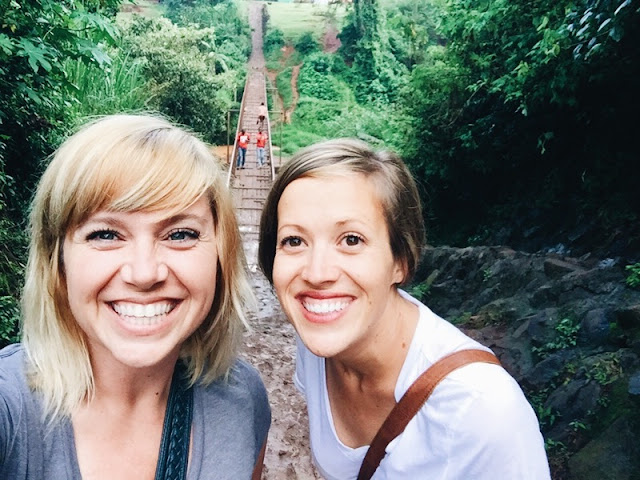 The next afternoon, thanks to an amazingly generous gift from Bre and Jay, we purchased a bunk bed, two brand new mattresses, and new bedding for the boys! They will sleep two to a bed, but at least they will have a warm, safe place to come home to each day. 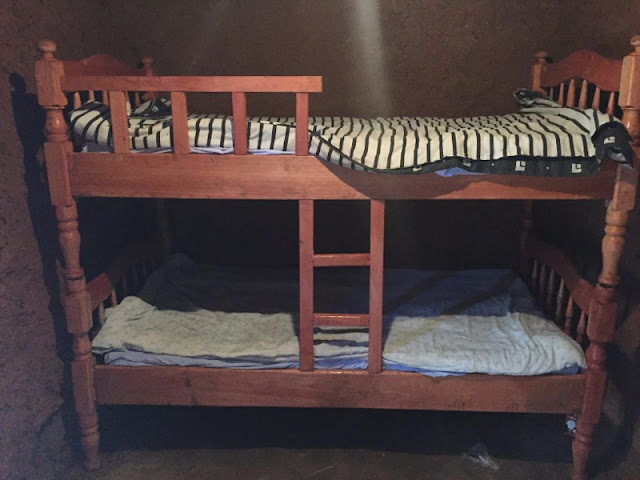 It took about an hour--in a very warm room--for these boys to build the bed {well, three built the bed and the other two played music on a phone and complained of thirst...} and unload the rest of the shopping: plates, cups, spoons, a light bulb, a new cooking jiko {also a gift from Bre and Jay}, soap, salt, sugar, beans and rice.

There on the left, that's P.I.G! He was excited to see his new home and help build the new bed! 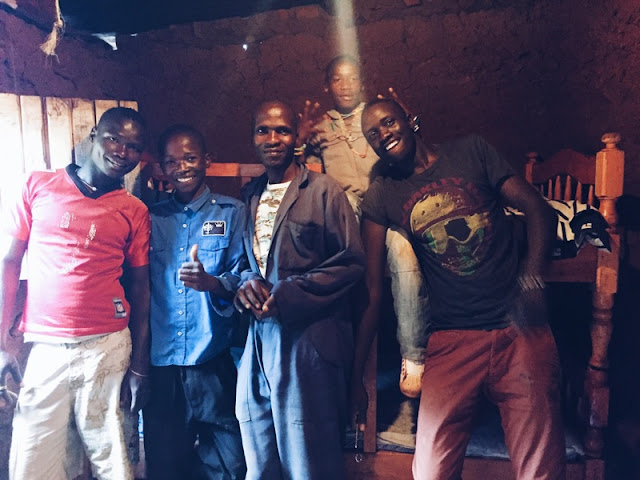 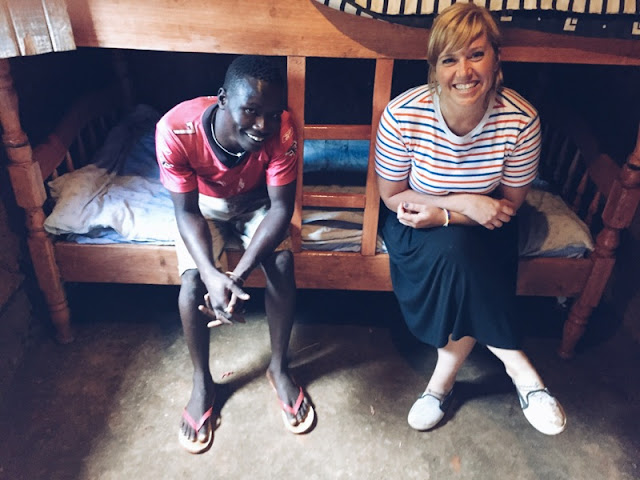 On the way home, Hillary {a former street boy himself, who has lived at Precious Kids Center for a few years, and loves to be part of changing the stories of those who are where he once was} sat up front with me. {Also, he is walking proof of the popularity of the bead craft.} 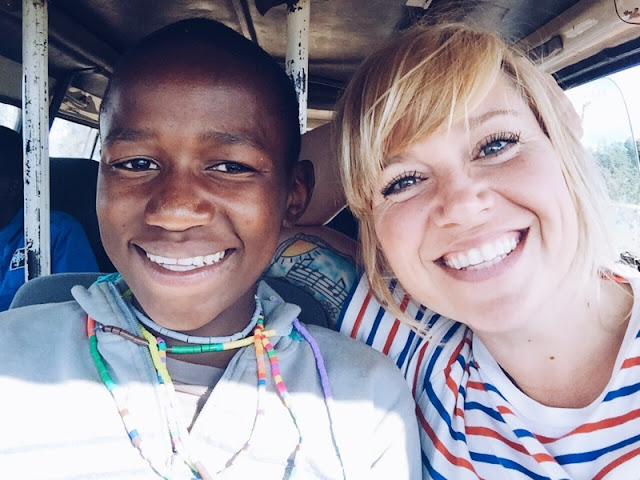 The next day, the boys met me at the kid's house to pick up the last of the housewares: bathing basins, a jerry can, and a large water jug {to store a supply of water in their home, since they have to fetch it from the spring at the bottom of the hill.} Rather than make them walk all the way home with their arms full of stuff, I called my friend David to bring a few friends and escort them home. 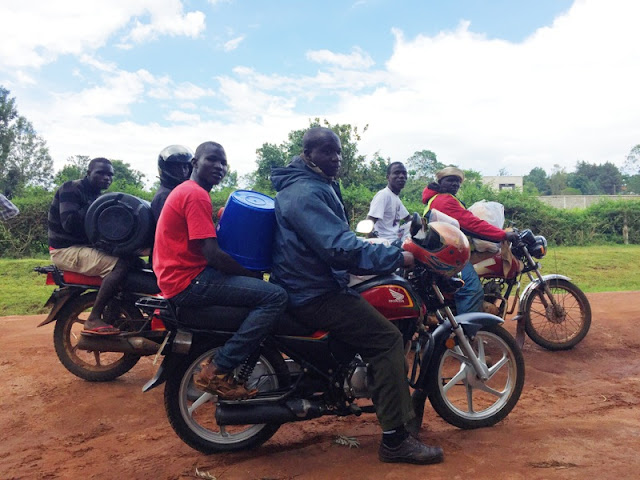 One last load, on the fourth day, was a large bag of charcoal {for cooking} and smaller bags of beans and maize {enough food for the first few months.} David to the rescue, one final time. 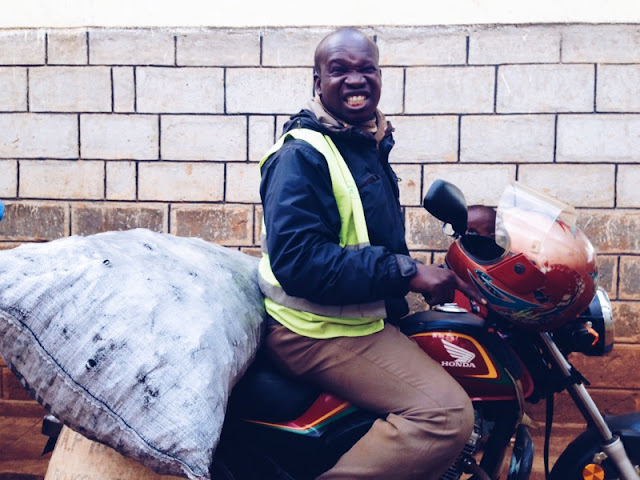 A few days later, the boys were each given a small amount of money to buy some new clothes. When they arrived to pick it up, I was told that Paul has enrolled in a computer course in town and is doing very well. He was so proud to show me his first exam, on which he scored 99%.

There was one more thing left to do: students can not receive Form Four completion certificates if they have any outstanding school fees. So, yesterday, without their knowledge, I went to the school and paid the balances for Jackson and Paul--about $50 each. Thank you to those of you who gave, so generously, to help make graduation a possibility for these boys!

They have each told me a bit about their goals for the future: Jackson wants to teach part time at their alma mater, Paul would like to continue computer courses, P.I.G. would like to attend mechanic school, and Alan will work hard to finish Form Four. I believe that these boys will work to succeed in  reaching these goals in the upcoming years, just as I have seen them fight to stick together, stay healthy and, for several of them, finish secondary school.
Posted by Allison at 7:52 AM

This is PHENOMENAL!! I love that EVERY SINGLE DAY you are doing things to LITERALLY change lives...and the world! I love you! And I know that SO many others do too!