Tuesday morning, we headed straight to the kids house. Though this was only day three for the team, they jumped right in with the kids. (Hillary and Toni with Cynthia and Frank.) 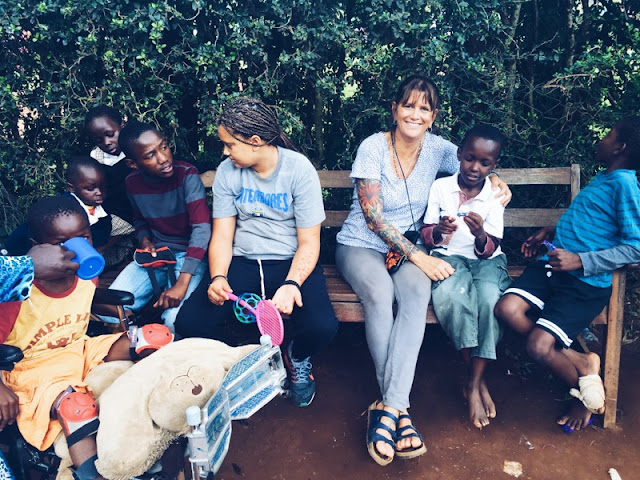 It's almost as though you're handed a kid upon entry. Here's Jordan with Grace and Kevin with Zippee. 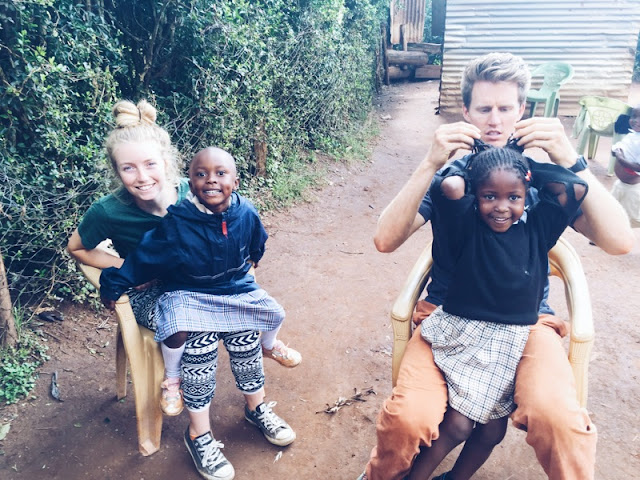 Sammy had to run an errand, so Sarah and Willie jumped in the front seat and went along for the ride. Willie doesn't care where he's headed as long as he is able to ride in the car. 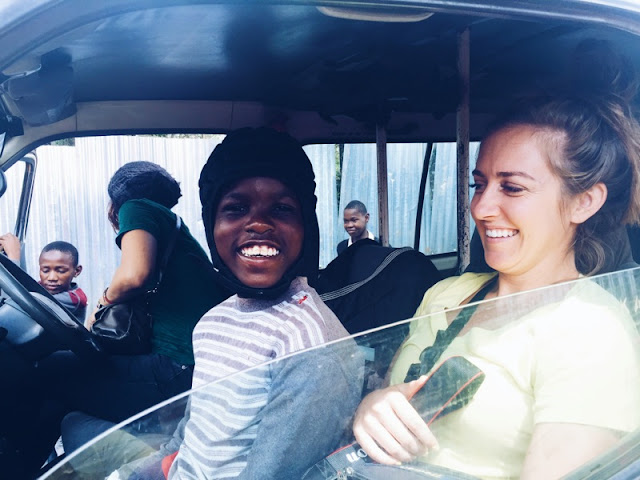 Suzie means business when she drinks. She will not be distracted while she finishes her beverage. 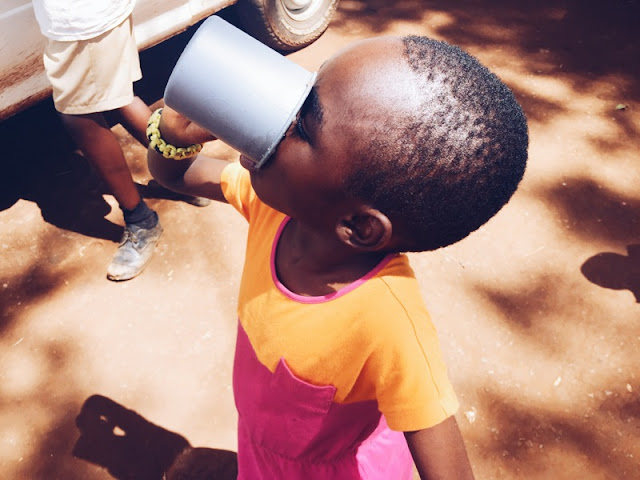 Sammy and I took a few minutes in the office to finalize the upcoming week's schedule for Steve's team and confirm dates and times with the ministry partners around town. As Sammy made calls and I made notes, we had a few visitors. Jabal is not usually willing to be photographed, but he agreed for this under one condition: he would not smile. 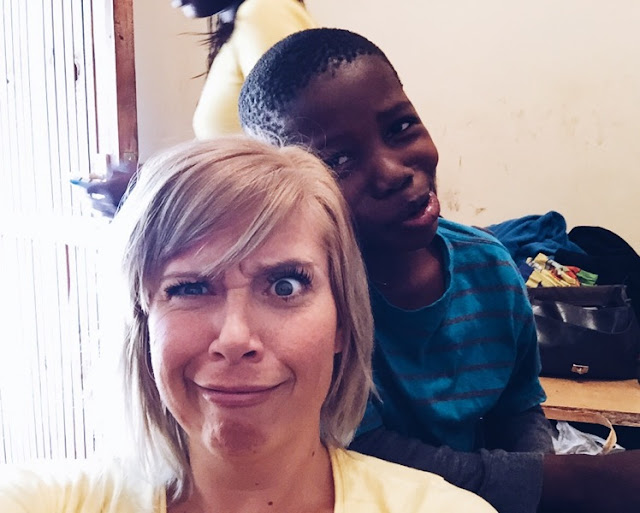 There are a few things you should know about Suzie, if you haven't already met her: 1) she has no sense of personal space and 2) she keeps her treasures either tied around her fingers or stuffed in to her shoes. Here she is modeling both. She stood on my legs for about an hour that day (and at least twenty minutes everyday since) She also carried around that bread packaging and kept wrapping it and re-wrapping it around her fingers. 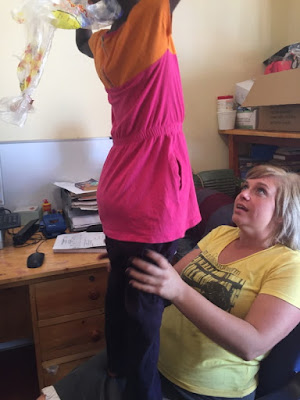 We moved outside, to give Sammy some time to work on other things (payroll, insurance, etc.) but that didn't stop Suzie from climbing back up on my lap. Here are a few quick shots in-between standing on my legs and balancing on her stomach on my head. 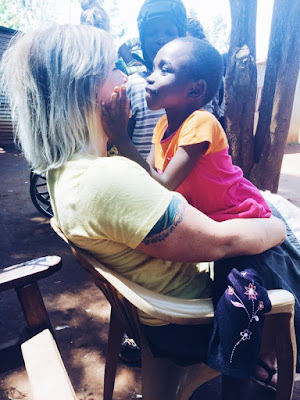 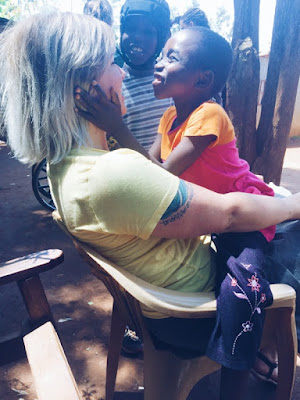 Manu documented these two (above) so I grabbed the camera for a quick shot of him. 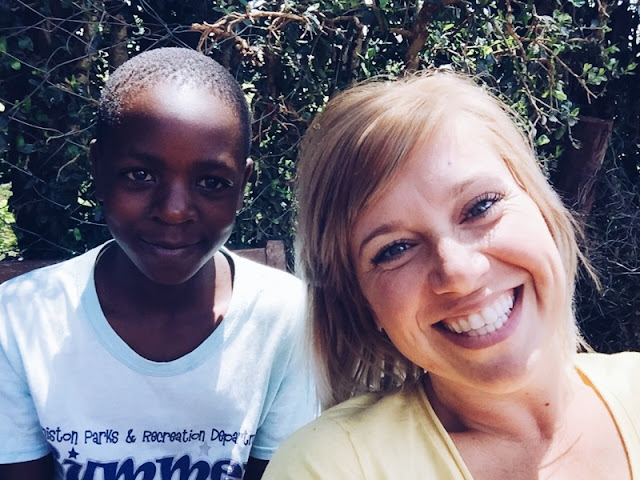 My two favorites in one photo. 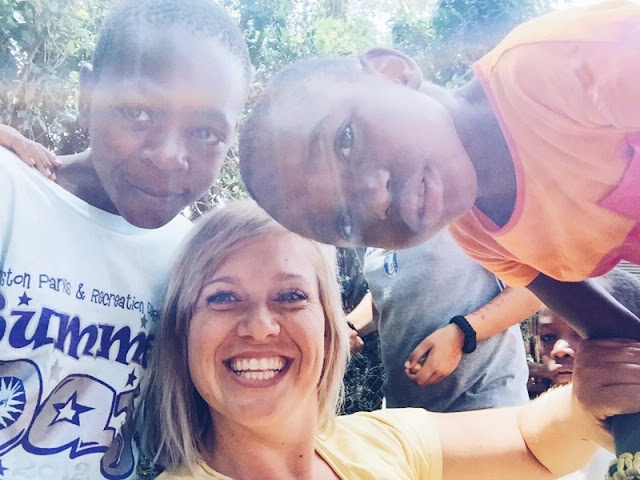 And, all of a sudden, it was lunchtime. I grabbed a plate and came out to feed Allan. 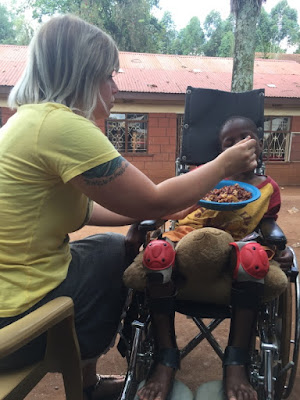 After lunch, I grabbed these two (Moses and Suzie) and moved them to the back room to be changed. 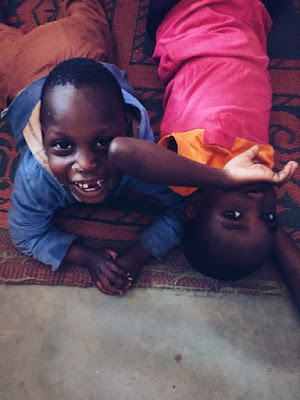 Manu was packing to spend the week with his parents, but all of the laundry had been thrown in to the crib to make room on the lines for more, so he climbed in to search for his clothes. Meanwhile, Suzie climbed up on to the bunks for a mix of headstands and somersaults. 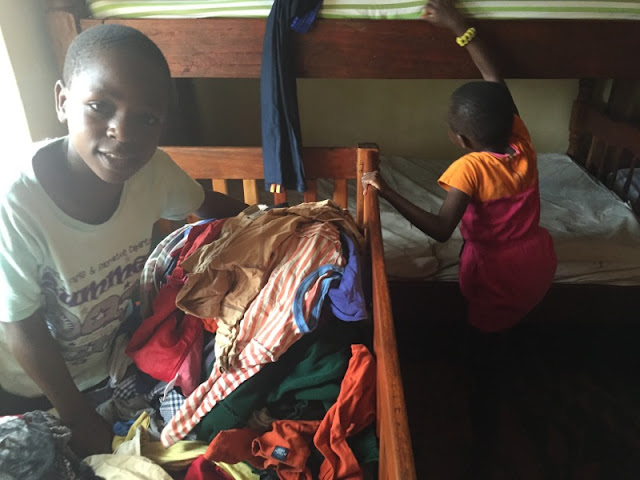 It began to rain, and jet lag was catching up to them, so our team jumped in the van and we brought them home. I quickly changed out of wet clothes (though, joke's on me, my seat in the van was soaking wet when I got back in) and we got back in the car to make visiting hours at District Hospital.

There is a boy from Precious Kids Center School named Noah who had been admitted to the hospital a few days earlier with frequent seizures and mild paralysis. We went to say hello to him and his mother and also to check on the test results. (His tests showed a brain abnormality that pointed to epilepsy and, with stronger medication, he is doing well now!) 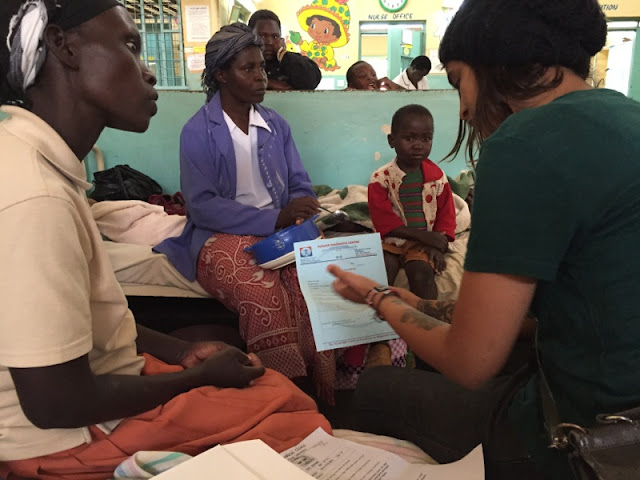 We then went to visit "the back room" which is for baby's who are malnourished, mothers who can't afford to pay their hospital bills, and/or abandoned children. Sammy had packed a bag of milk and biscuits for each child in the wing. 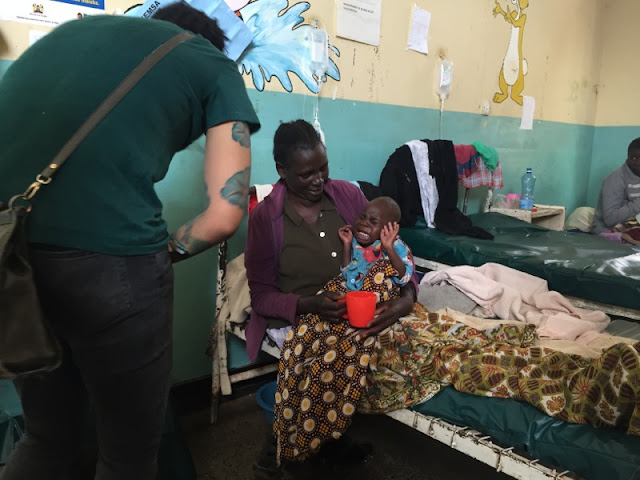 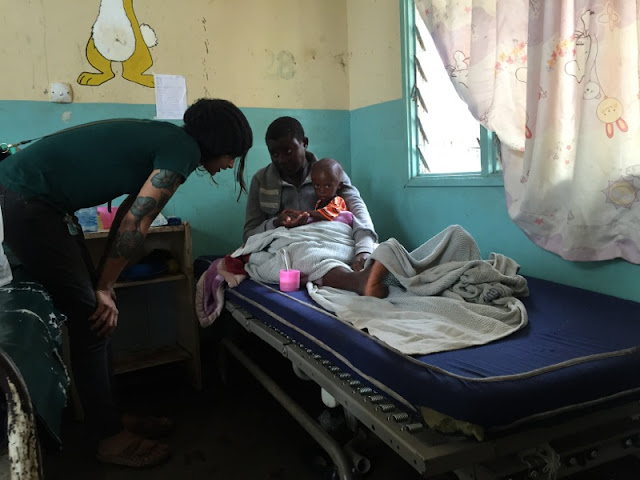 This little boy, Abraham, has been abandoned by his mother. He is a really cute little kid whose life now consists of a bed in the back of an open room, being cared for by whatever mother is in the next bed with her baby. He asked Sammy to open his packet of cookies immediately and, when handed the milk, chugged what was left in his cup and gave it to Sammy for a refill. Our friend, Leila, has a few open spaces at her local children's home, so we are hoping she can bring him to live with her. (A few kids in Sammy's home are from this room, having lived there for months or even years after having been abandoned by a parent.) 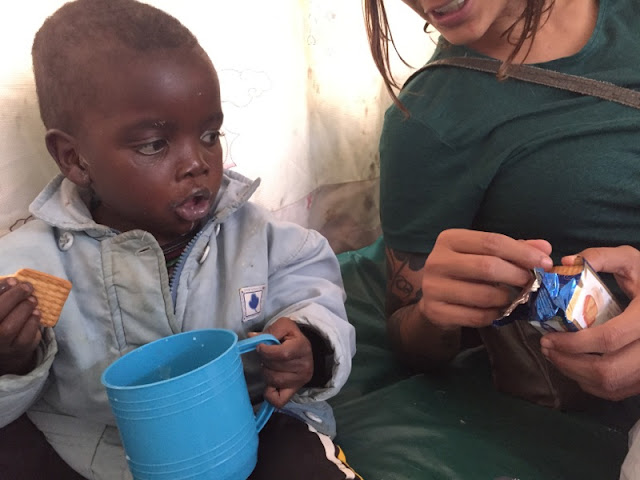 We swung by the house again to pick up the team (and change my, once again wet, clothes) and then headed to the kids house to pick up Manu for his week at home. Bramwel, Joy and Male were huddled together by the door waiting for the yard to dry out enough to play outside again. 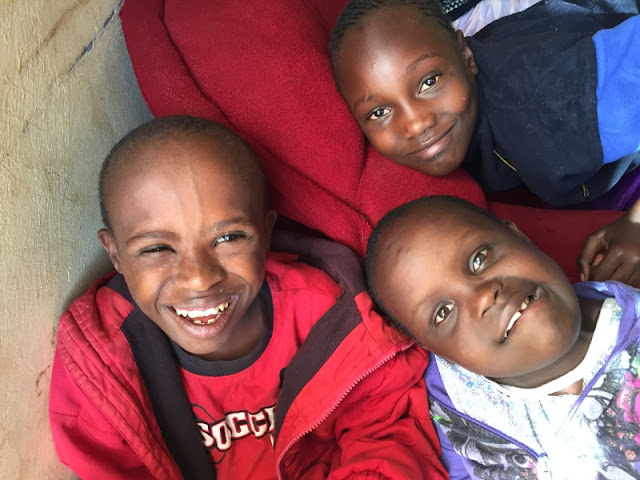 With a van-full of people, we drove to Manu's family's village. Manu has both parents and several siblings who live in two homes on a plot of land just outside of town. He came to Sammy's after they met him at Sister Freda's hospital. Someone brought him in one afternoon, while Sammy and a house mom were there with another kid. The man said he had found the kid passed out on the side of the road and brought him to the hospital--didn't know his name or where his home was. A few hours later, Manu woke up and explained that this happens often. Because he was, essentially, a John Doe when he came in, they didn't call his parents, so Sammy and the house mom cared for him, fed him and watched over him during his seizures, through their stay at Freda's. The morning Sammy's kid was released, they went to say goodbye to Manu and he said, "please take me with you!" So they spoke to his parents, got him on the right seizure medication, and now he is a happy, school-going kid. He's awesome and adorable and sensitive and even a little artistic.

Here he is at his home, with a few of his siblings and nieces and nephews. 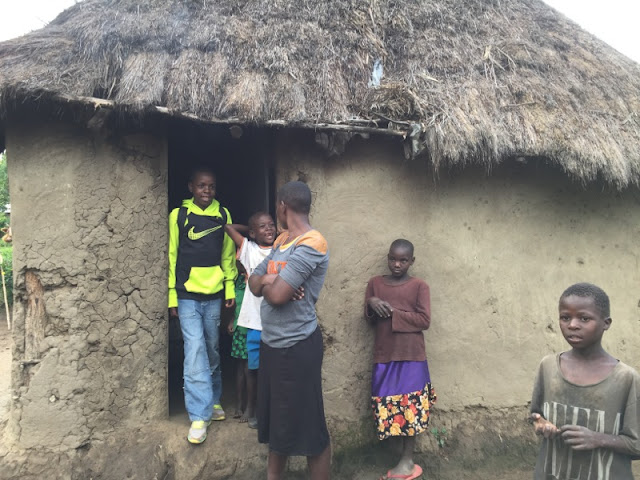 We said goodbye to Manu and he walked us back to the van, holding my phone all the way. He's really taken a liking to Taylor Swift and Whitney Houston. He handed me my phone with "I Wanna Dance With Somebody" playing and asked me to please listen to it on the way home. Instead, I began to sing and dance (it is one of my favorite songs!) which, of course, caused a scene in the neighborhood. A man in the house across from our van came out and we had a brief dance party for a rapidly growing crowd. The team thoroughly enjoyed it, but I'm not so sure about Manu, who has to live here! 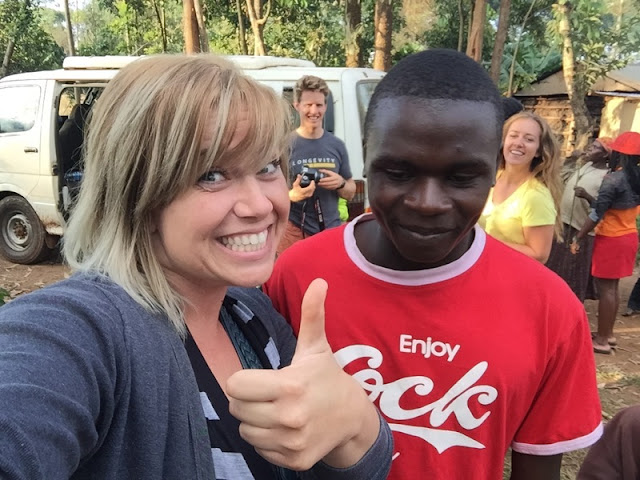 We got back to town around dinnertime and headed straight for Chinese Food with our friends Leila, Manu and their daughter Samantha. After dinner, we kept up the nightly tradition of a game of Five Crowns before bed. Steve was set to arrive the following evening, so we prepared for the beginning of a long, full week!
Posted by Allison at 11:05 AM