How The Generosity Of Others Makes My Days Amazing

I was able to do some pretty rad things today...I'm excited to share them with you. And, I'm aware that the last two weeks have been full of long, overly-wordy posts, so today I'm hoping to give you a few more photos and a bit more brevity.

From the moment I walked in today, Dinah was calling my name and asking to be carried around. She's a tiny child, but she gets really heavy after awhile, so I brought her straight over to a chair in the shade to hang out. 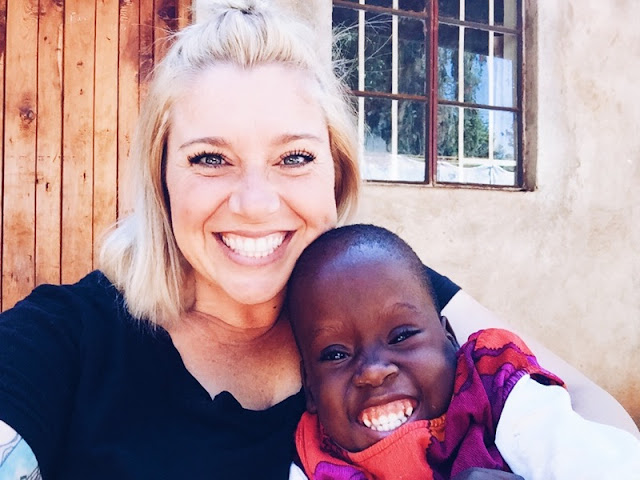 Male joined us for a while...kid loves her photos. She keeps putting scraps of things over her eyes and asking me to take her picture. 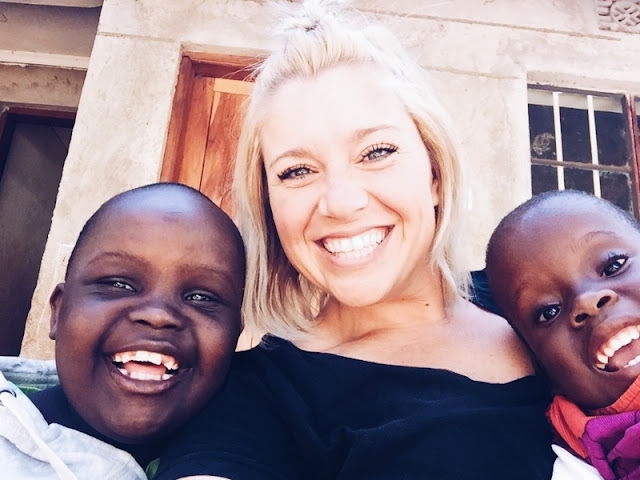 I taught Linah the beauty of the topknot, too. She got in to it and even had me re-do it a few times when it came loose. 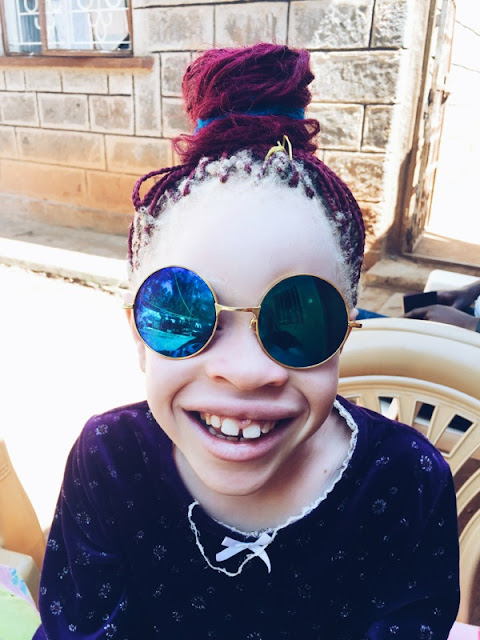 Dinah is really cute. And she's a genius. She sat on the patio and let all the other kids come to her to play. 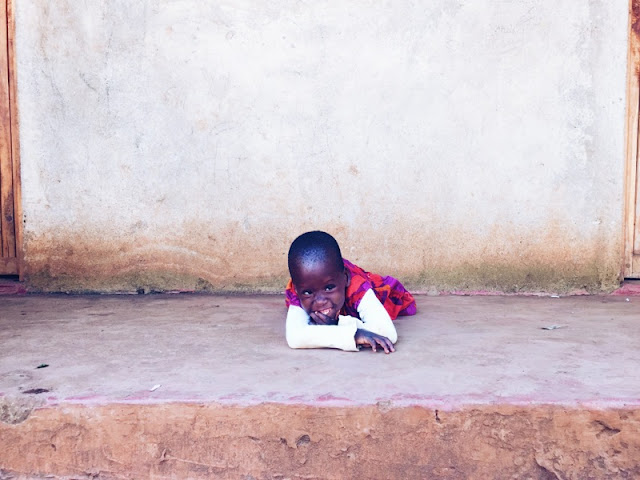 Victor had a prime lounging spot in the middle of the living room today. He was right in the center of all of the action and LOVED it! 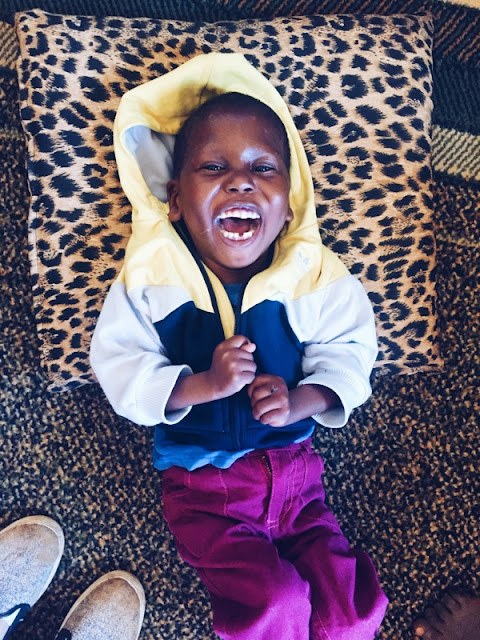 Phoebe's cousin June visited the house today. Linah kept calling her "the beautiful child." She would whisper to me, "Tell her she is beautiful." It turned out, Linah thought June only spoke English and then was super embarrassed when she realized June had understood the whole thing! I asked them to sit for a picture and Linah said, "No! I'm afraid of her! She's beautiful!" 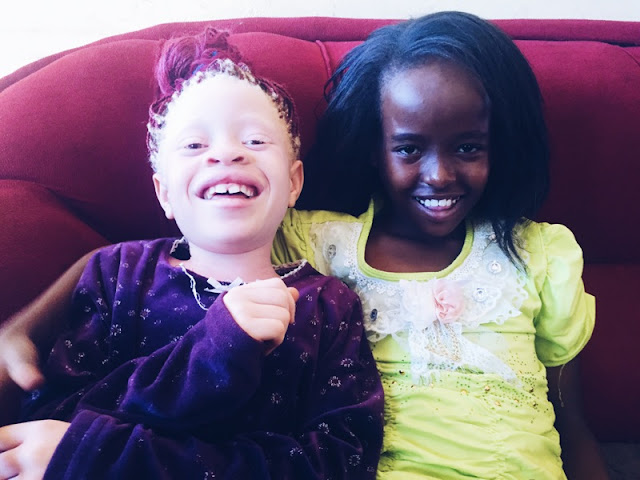 Sammy has been in Nairobi for two days and the kids are missing her like crazy. I came outside today and found them in a group, talking to Sammy on speakerphone. 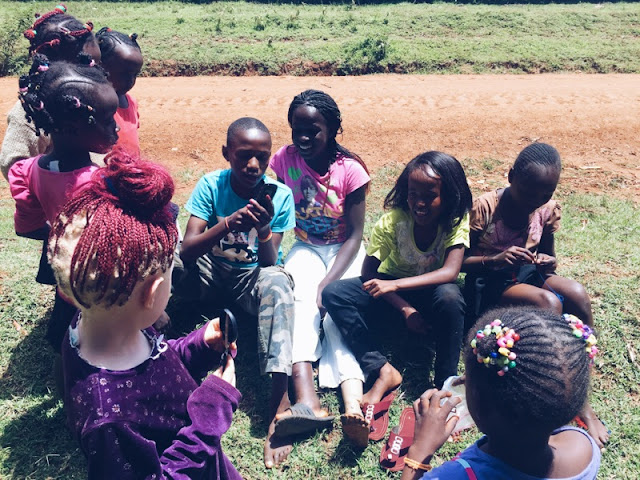 Trinah fell and hurt her arm today, so she sat on my lap until she felt up to playing again. She also finished my tea in the meantime (which is great considering I was semi-forced into drinking tea today!) 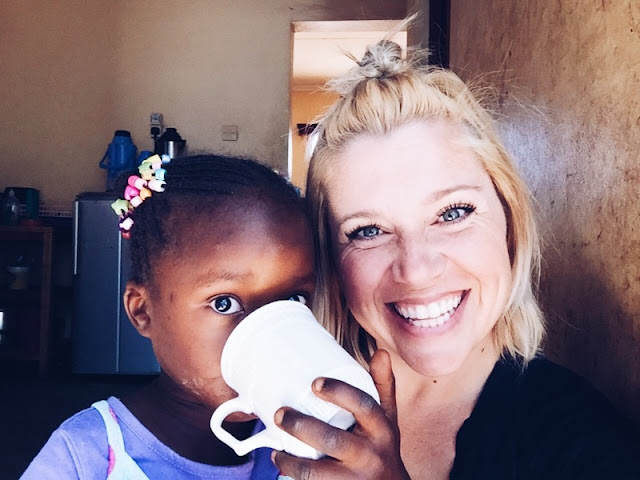 Bram pushed Allan around all day. They went around and around the compound, stopping to make jokes (and cause trouble!) 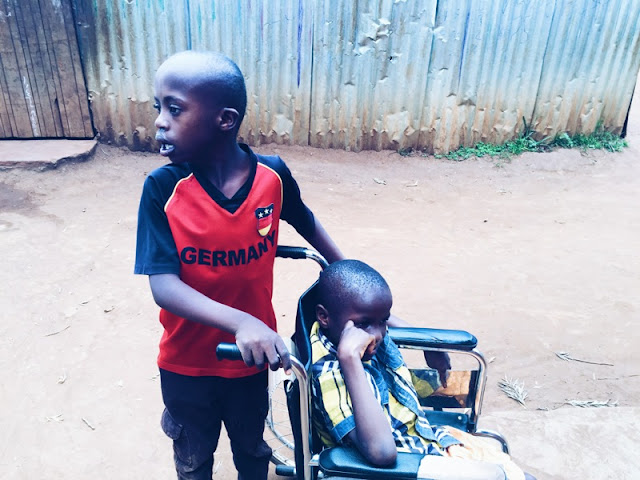 Manu also loves to have his picture taken. He had been surrounded by friends until moments before this photo, but I love this lone-shot of him! 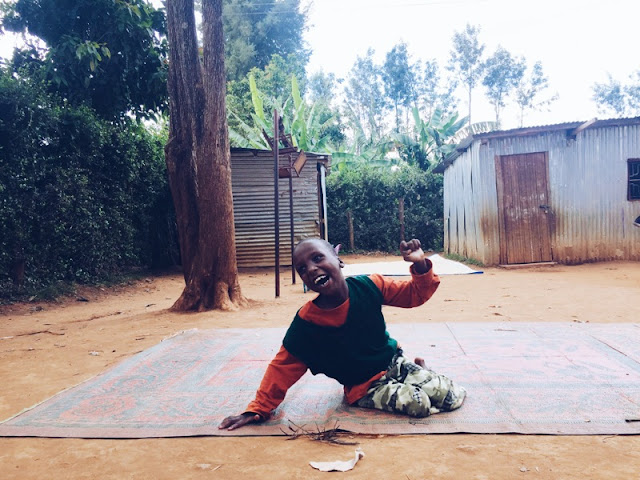 I was holding Dinah until she saw John. He is so kind and loving that all of the littles love to spend time with him while he's home from school. 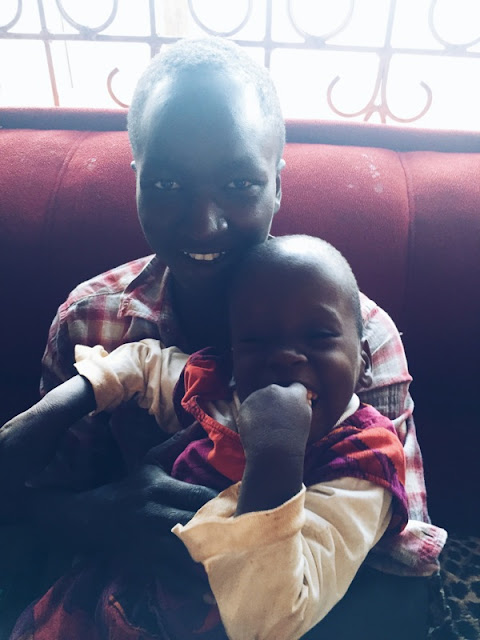 Christine had Mickey Mouse hair today. She's incredibly cute and has an adorably tiny voice...I take about ten pictures of her everyday. 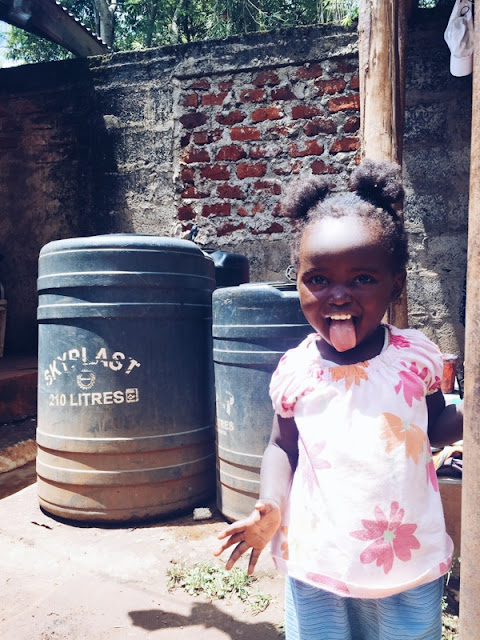 There are 7 students from Oasis of Hope who are still in school in Kitale. They have been fighting to make ends meet and achieve their dreams of finishing secondary school (THREE of them will graduate in November!) As a special treat, before school begins again on Monday, I took them to town for chicken and fries. And sodas, of course. All really special treats for these guys. (Our motorcycle taxi driver also joined us for lunch.) 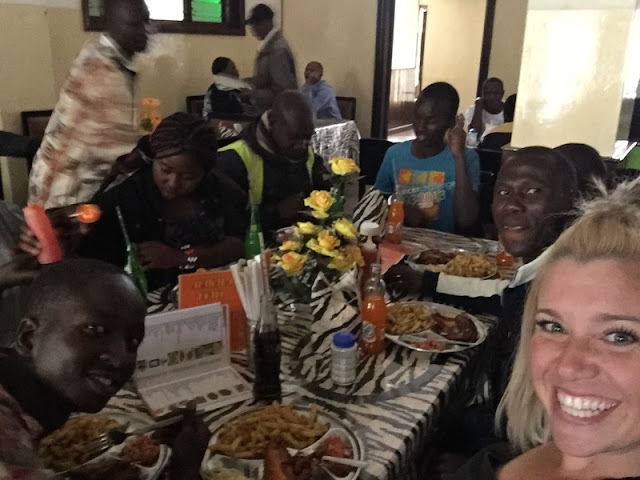 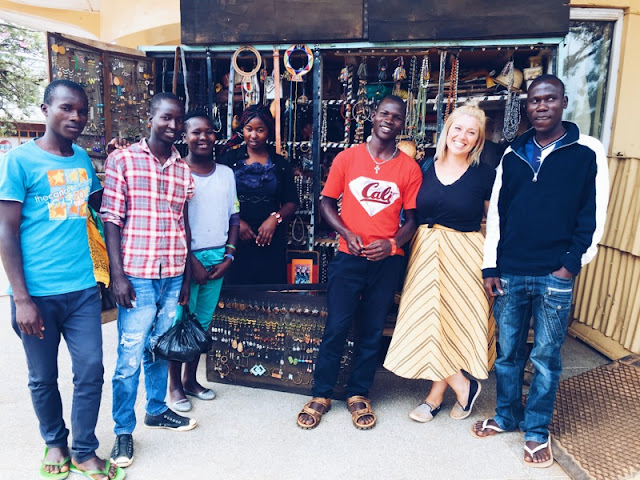 This is John. He lives on the street and, a few weeks ago, was beat up pretty badly by another street boy. He found us in town one day and told me his arm was broken. I asked him to come to the clinic we were hosting in Kipsongo the next day to seek a doctor's opinion. Upon the doctor's request, we sent him to get an X-Ray, and then have a cast put on until the fracture healed. Today, I was able to give him a big package of milk and the small amount of money it will cost to have the cast removed. I am sad that he still lives on the street, but so excited to see him with two fully functioning arms. 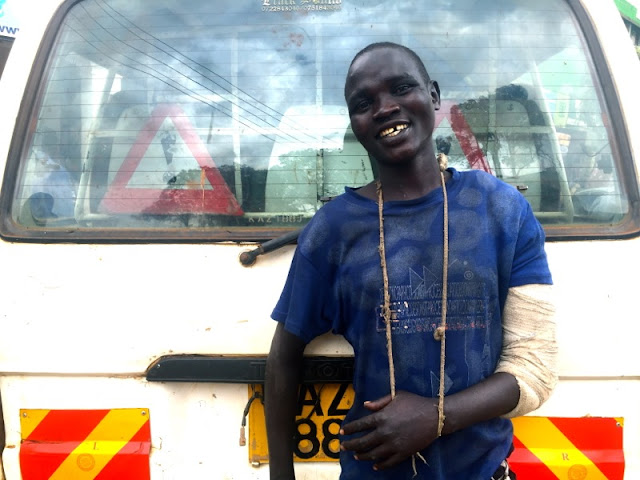 We came back from town with some food (to give to the three school boys who live on their own) and everyone wanted to help unload. Moses took his responsibility over this salt very seriously. 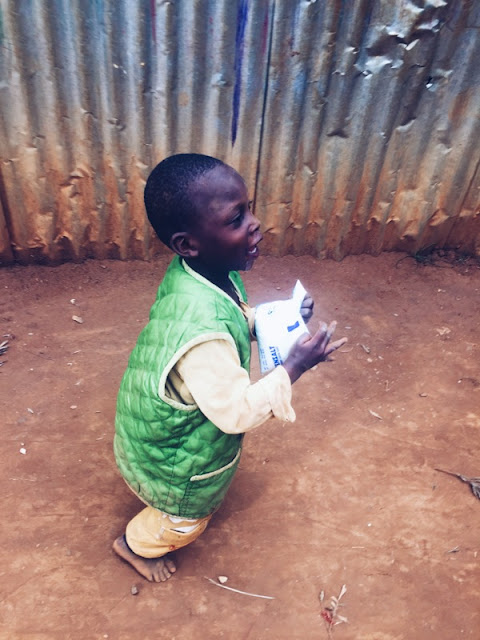 Someone lent the boys a Playstation and, as classic teenagers, they took turns playing and watching each other play a racing game for a few hours before dinner. (One even offered me a turn...so kind of him!) 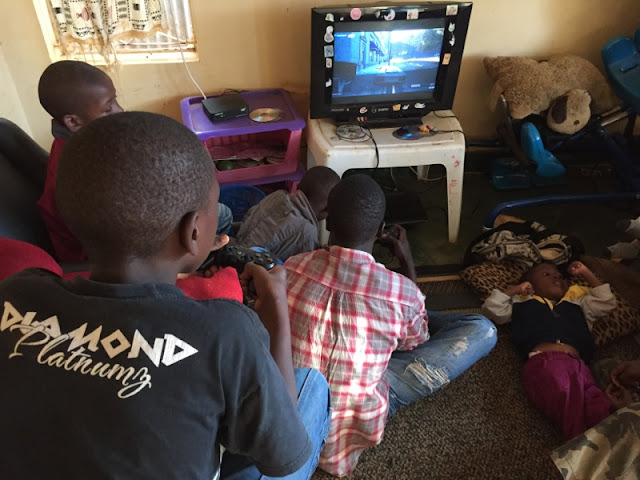 Today I was reminded of the amazing opportunity I have been given. Today, I was able to treat kids who have no one to care for them, to a special lunch. I was able to give street kids packets of milk and give one money for medical care he would otherwise not have received. I was able to do all of these things because of the generosity of people who believed that this is where God wanted me to be, at this time, and gave to make it a reality.

To say I am grateful to live these stories each day would be an understatement. Thank you to those of you that gave--and continue to give. Thank you for your prayerful and emotional support as well. It's such a gift, to me and to those I have the privilege of serving.
Posted by Allison at 12:30 PM

Amen amen amen! Love every bit of this! Hair, arms, chicken, you!