A Photographic Tour Of Kipsongo Slum

As I mentioned, there are a few things that only happen while a team is in town and, fortunately for us, we are invited to participate. One of these is a medical clinic. Technically, the staff and nursing students at Sister Freda's run clinics like these several times a year, but we don't typically join them.

This particular clinic was special to me because it was being held in Kipsongo, the slum that I have been working to build relationships in. As Freda and her team set-up and organized the lines, our team took a tour of the slum.

It began with this woman sleeping (more likely passed out) in between the homes...so we knew from the start that this would be an eventful morning. 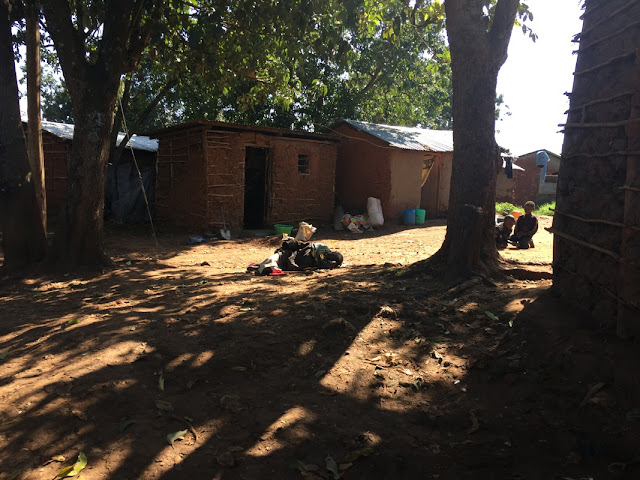 Steve has been visiting this slum for years--I first came with one of his teams in 2004--so he has many, many friends in the neighborhood. One of these friends is Lucy. Awhile back, when this slum was really crazy (it's still not super safe--especially in the evening when the local alcohol flows like wine...) Lucy's throat was cut in the middle of the night. The blade missed her jugular vein by a few inches and she was able to seek medical care in time to save her life, but she carries a large scar along with her memory of that night. This morning, as we talked with her and saw her home, Steve mentioned how thin and unhealthy Lucy looked. He gave our friend Patricia, who was leading our tour, money and instructions to take Lucy to the hospital to be tested for HIV and seen by a doctor. On Wednesday, we heard that she tested negative for HIV(!!!) The doctor said she needs a balanced diet and should give up alcohol, but is otherwise healthy. 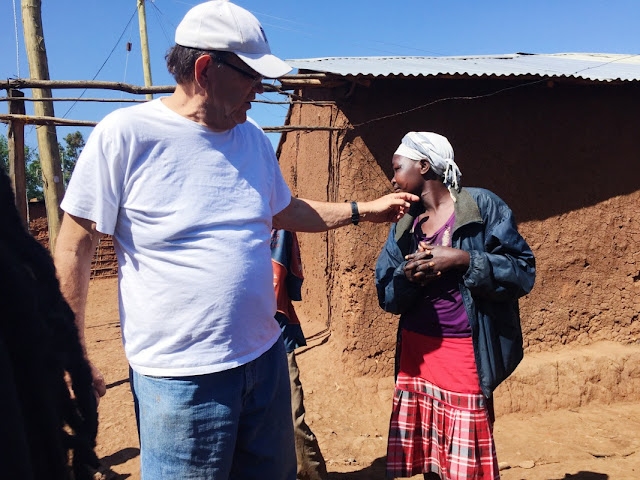 We wandered through the homes until Steve caught our attention once more. He stopped us in front of a house and told us about the Ukrainian Pastor, Gennadiy, who had built this home with his own two hands. He spent an entire day building, slept through this night on a mat in front, and woke up early to finish. It still stands and is a safe, hygienic home for this family. 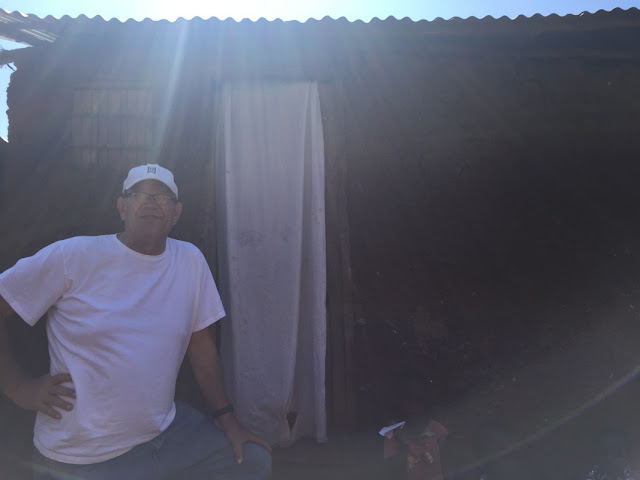 The first time I visited Kipsongo, the entire slum was filled with 'homes' like this one on the left. Sticks shaped in to dome-like structures and covered with bags and trash for insulation and weather protection. Obviously, these homes are unsafe and unsanitary. Over the last five (or so) years, an organization has come in and raised funds to build new homes, complete with concrete flooring (which keeps away jiggers) for the residents of this area. It is amazing to hear the women talk, with pride, about their homes now. Patricia (in the green dress) was full of statistics and details as she led our tour through homes past and present. 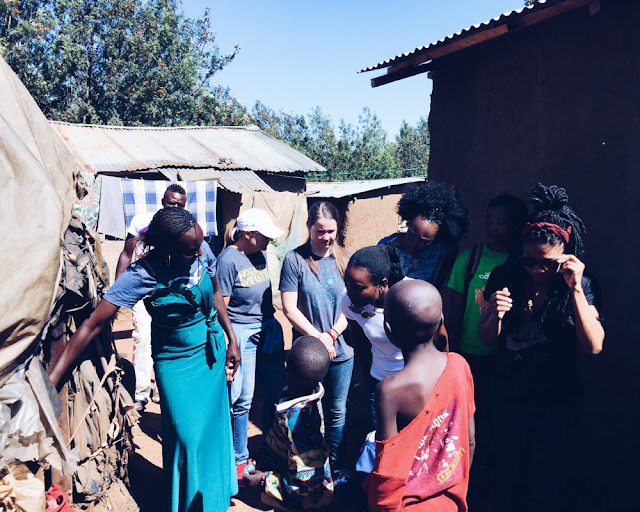 Another organization has built two wells in the community to help prevent water-borne illnesses. We walked up as this woman was collecting her daily water and Kamari jumped in to help her pump. 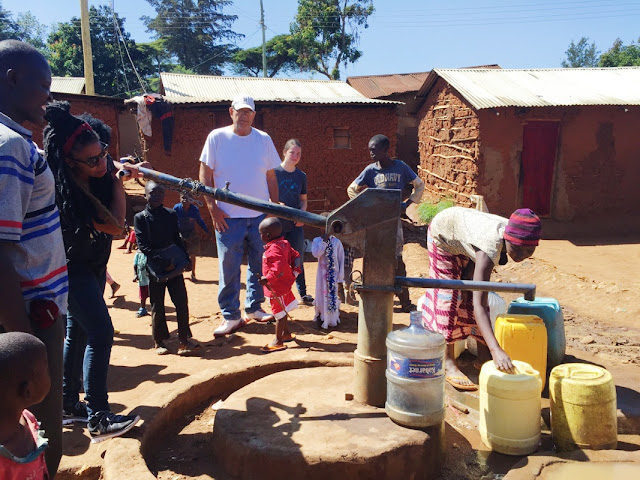 After this, we walked in to the clinic. Surrounded by men and women of all ages--putting faces and names...diseases, wounds, and scars...to the homes we just walked by--was the final straw for the women on Steve's team. They promptly burst in to tears. Steve rallied the two cars of people and took us to lunch in town for a small break and a bit of time to process all that we had just experienced.

With full stomachs, Leila and I ran downstairs to another restaurant to pick-up food and water bottles for Freda's team, our friends we'd left behind, and one woman (whom I love) who told me that she and her family hadn't eaten for several days.

When we arrived back at Kipsongo, I jumped out of the van, to find Hellen and notify the others that lunch was in the van and nearly stepped on these two boys lounging in the grass. They were so cute! 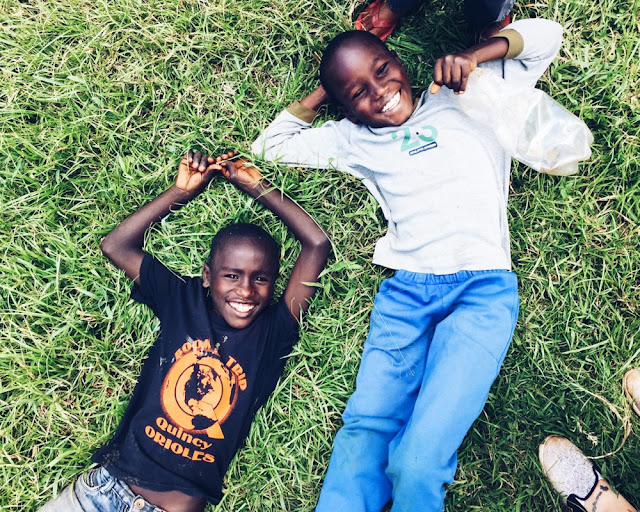 Many of the women in Kipsongo are part of a group that make beaded jewelry to sell in town. The hope would be that this would generate enough income to keep the women from their current #1 employment option: prostitution.

They had set out blankets and seed sacks covered in earrings, bracelets, and necklaces to show Freda's staff and our team. I wandered around to greet each woman and, in broken Swahili, cracked jokes, sang and danced, and explained that I didn't have any money for jewelry that day. As I laughed and danced (and fought off friendly harassment from upcoming saleswomen) this mama wandered up. She was speaking in quick Swahili and grabbing at her chest making a sucking noise. Another woman translated for me: "Her daughter's name is also Alice and, since she nursed her years ago, she could also nurse you now." I politely declined and we shared a laugh. She came back with a necklace for me, as a gift, and told me to please remember her when I visit again. 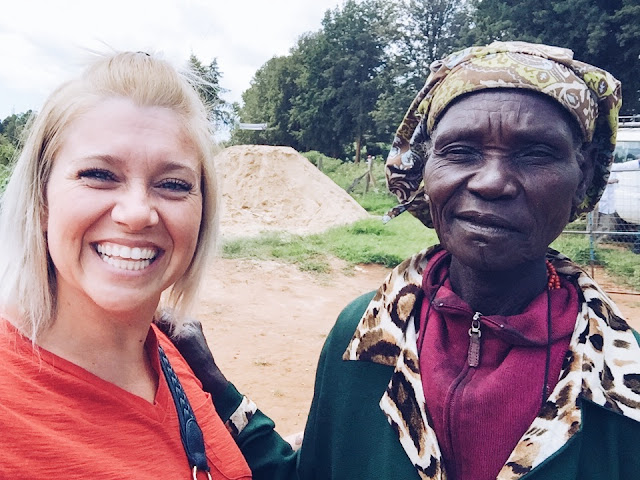 Andrew and Djambi are a brother and sister who grew up in a ditch (an actual ditch on the side of the road) with their mother. Steve met them at a street kid day (when we used to open the doors of a local church to bathe, feed, and entertain nearly 200 street children) and has watched them grow up for the last 12 years. Andrew is currently in Form 1 (freshman year of high school) and Djambi is a proud mom of two kids and a member of the beading group in Kipsongo. While they were here with Steve I was excited to recreate a photo he took with them on the first day they'd met. 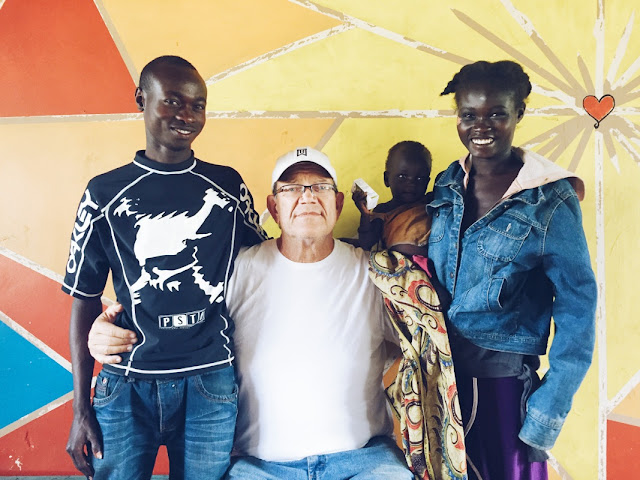 We brought the team back to the house to reflect and recharge while Kamari and I snuck over to Precious Kids Center to play for an hour.

On Monday, Junior had fainted and was out for about an hour. They took him to the hospital and diagnosed him with malaria. He spent the night in the hospital and was warmly welcomed home while we were there on Tuesday afternoon. Because he was born with hydrocephalus, the doctor's recommended that he have a CT scan to check that his shunt was still working properly. Phoebe and I made a plan to take him first thing Wednesday morning. 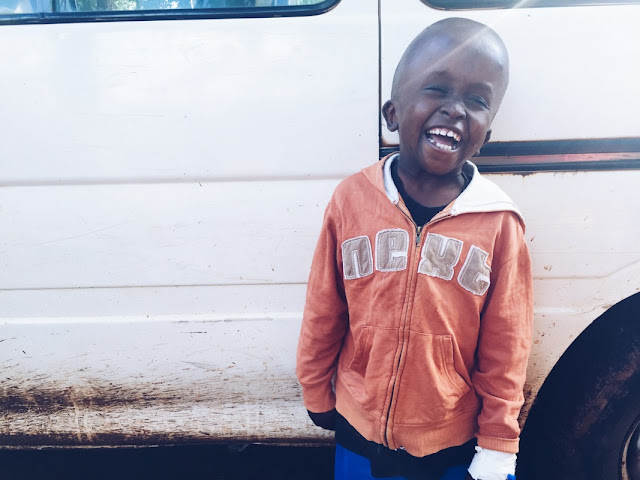 And then I stumbled across Male and Bram cuddled together, being adorable. 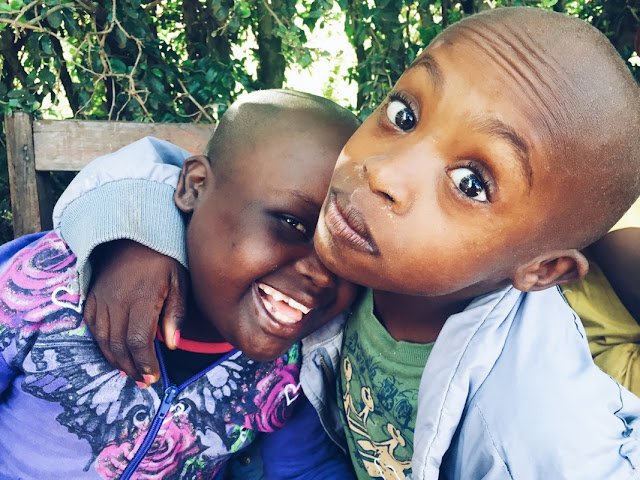 The swingset caused more injuries than it was worth, so Sammy wrapped the swings as high as they would wind. It, clearly, does not stop the kids from trying death-defying tricks. 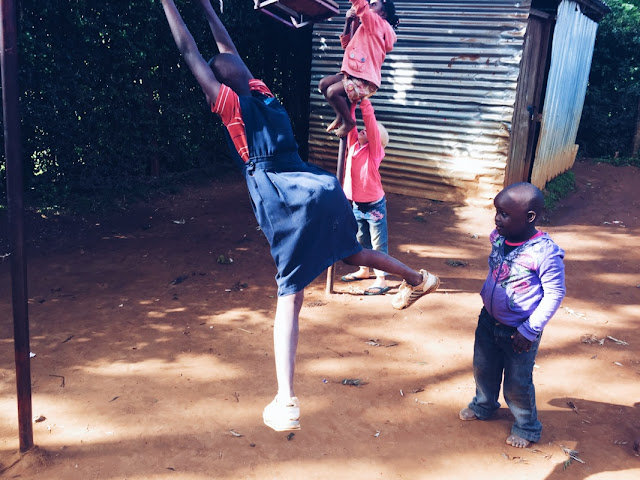 Kamari and I rejoined the team at Steve's just in time to hear that they were planning to eat Chinese food for dinner. I love the food at this restaurant, but it's also a mosquito-fest, so I made a quick trip to my house to put on an outfit that would keep me covered. As a bonus, it also made me look really cool. 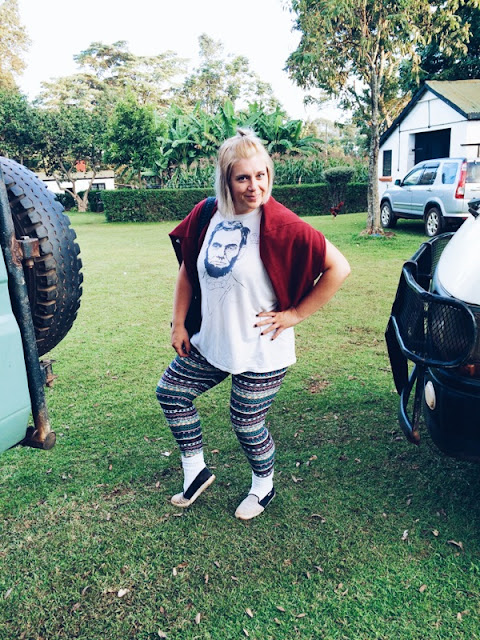 I left Steve's with excitement for Wednesday's events--after Junior's CT scan, I would meet up the team for visits to two of my favorite places in Kitale: the Women's Prison and Shimo la Tewa slum. Can't wait to share those photos and stories with you tomorrow!
Posted by Allison at 12:20 PM

It's so easy for us here in Orange County to complain about the heat, it's been in the 90's and high 80's for some time; and we have tons of traffic especially on the freeways and bigger streets and shopping centers and the malls and movie theaters and restaurants and the super markets with people everywhere and our cars getting dirty and the price of gas and , and...Holy Cow!! we have it made and forget so easily...

Reading about the happenings in Kitale and other areas in Kenya gives us a deserving kick in our cans...keep up the good work and I'll stop complaining about this place where we live...

Continue your good work and may God bless you and your group and all those little people too...