Today began with a little more physical exertion than I had planned. I went outside to, once again, prove I know how to ride a bike and then was challenged to a race. I, unlike Sammy, am not really a daredevil (except for my skateboarding accident on my first day at Mariners) so I declined the race, but agreed to a leisurely ride around the block.

Holy moly was I wrong about the "leisurely" part! Riding a bike that's built for a 12-year old on roads that are tricky to drive on...whoa did that seat get uncomfortably quickly! (Not to mention my skirt got caught in the back tire and slowed me down considerably.) Manu and I rode around the corner to visit Sam, one of the house kids who'd gone to visit his parents for the week, and then came back home to let me sit on the couch and continue sewing for a while.

That was the plan, but then I saw all of the great hairstyles Phoebe had given to each of the girls and I knew I had to take my turn.

Check this bad boy out! Everyone watched as she put in one rubber band after another and kept pointing and saying, "You have hair like a small child!" One of the teenage boys said, "Oh, this is not good!" 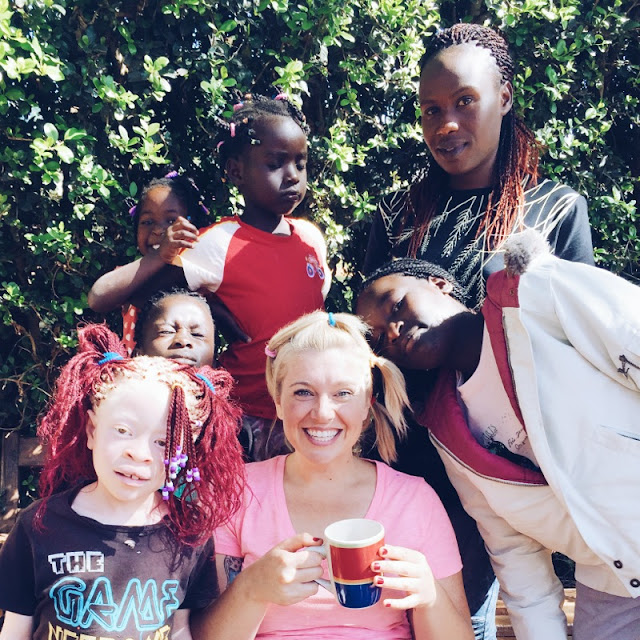 I did want to make sure to get a picture with Linah and her (yet again!) Spice Girls hairstyle. 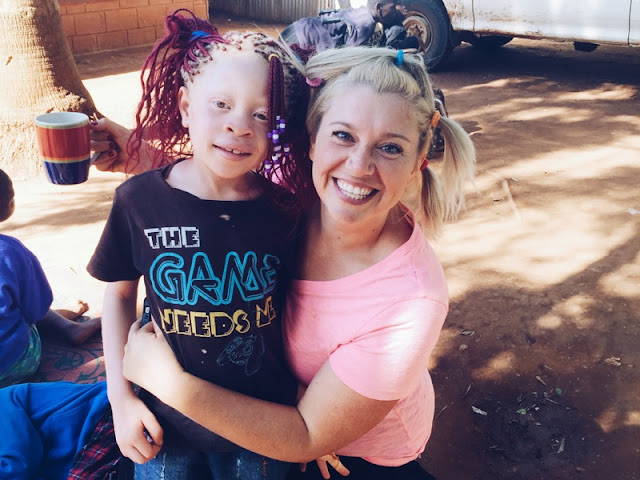 I finally made it inside--out of the sun--to do some sewing and catch my breath. I finished Willie's jeans from yesterday and worked a bit more on the pillowcase.

Anyway, back to the sewing. I sat across from the physical therapist as he moved one kid after another for their turn. Moses absolutely loves therapy. He kept waving his hand and squealing to get my attention so I could watch as he laughed at whatever muscle was being stretched at the moment. The kid is a mismatching dream. 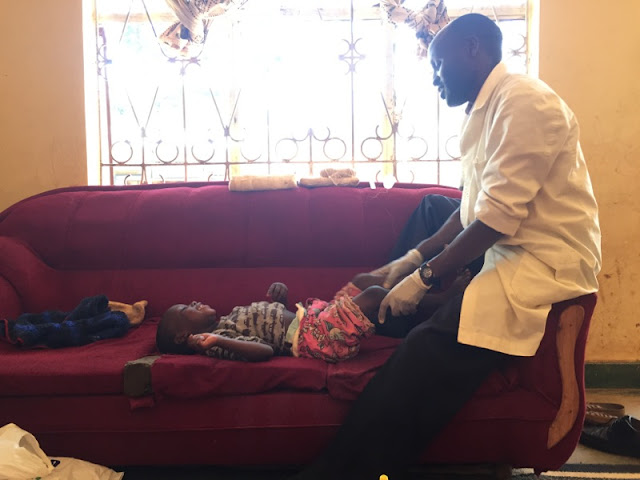 Before long, I realized it had been awhile since I'd seen Suzie. I asked around and no one was sure where she'd gone. Finally, someone said she'd gone to the farm across the street with Manu, so the panicked search was unnecessary. You never know with a kid who can't speak! She can't holler, "I'm here!" Or tell anyone where she lives if she's lost.

When they came back from the neighbor's, the boys started up a game of soccer. They ran back and forth across the lawn, dodging a flitting Suzie who has no desire to actually kick the ball, but wants desperately to follow it up and down the field. 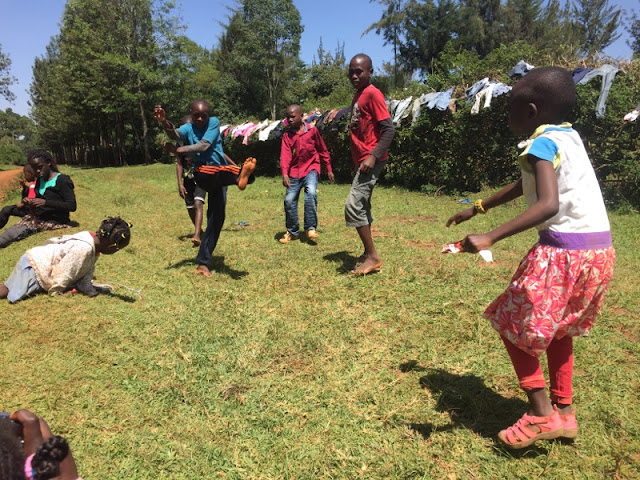 I brought her back inside the gate, but she found a small space between the fence and the bushes and ran back outside. Twice. And then later, escaped, crawled under the bushes across the street and ended up in another farm. So, she was in a bit of trouble. When she's being really crazy, the house moms know there's only one place she'll sit still: in the corner by Mama Shiko (the laundry woman who's love for Suzie rivals my own!) Here's Suzie in her version of time-out. 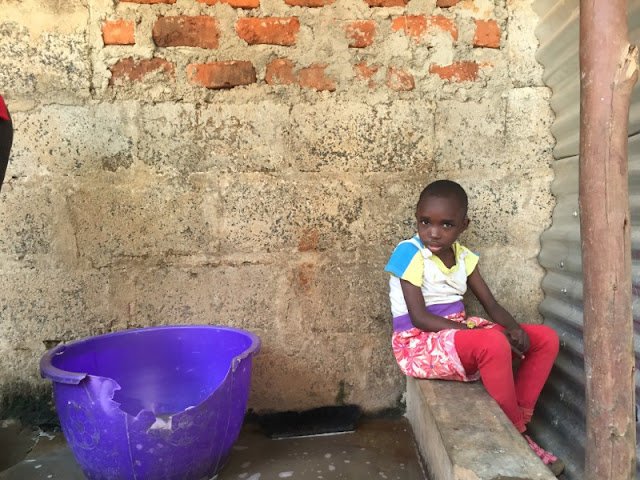 Lunchtime came and went and, as promised, I loaded up the older boys and took them to our house for snacks and a movie. The original plan was Fast and the Furious 7, which we knew they would love, but when the DVD didn't work (dang those 50-cent burned copies!) we settled on Mad Max: Road Fury, which was definitely not what I wanted to watch, and, despite the fight scenes and explosions, did not hold the attention of eight teenage boys as I'd hoped it would.

I made a giant bowl of popcorn--which they ate in the time it took me to boil two pots of water for drinking chocolate--and then asked for water, milk, sweets, playing cards, and headphones. It was all very "If You Give A Mouse A Cookie."

It was simultaneously very fun and incredibly exhausting. 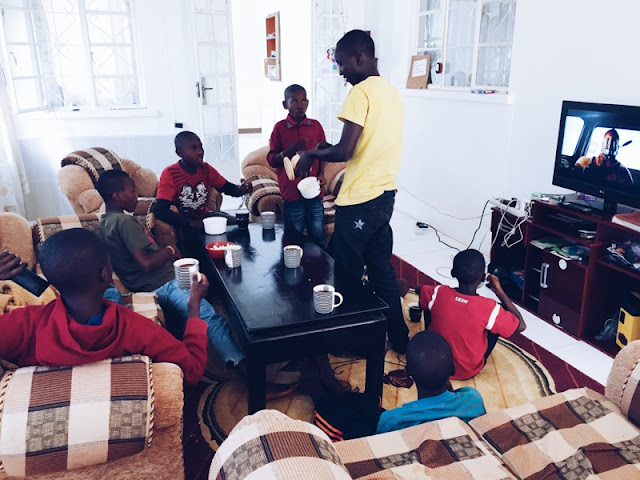 When the movie was over, they asked for a second, to which I said, "Oh nonononono. Let's go! I have a surprise for you!" And they all piled in to the van. I began to drive toward their home, but then turned at the last minute to go to the gas station. I parked and ran inside for 24 samosas. (Three each.) The boys cause a scene wherever they go: at one point, while I waited for the samosas, I looked outside and Hillary was standing on top of the van, pulling berries from the tree above. There was a table of old men who looked and them, then at me, and laughed. They understood the madness of carting around a bunch of boys. 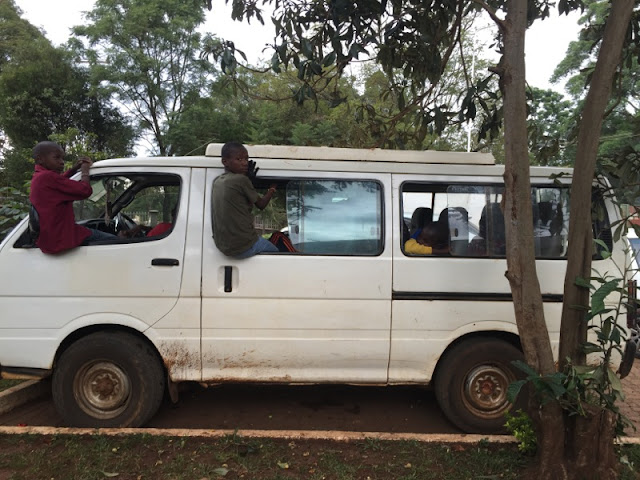 I drove as slowly as I could so they could enjoy their samosas before being bombarded by the other kids and forced to share. Augustus found a poncho in the car, put it on over his head, and secretly ate his final samosa under the blanket. They each said thank you about five times...it was very sweet.

When we got back, everyone ran around outside for awhile while dinner was cooking. Here are seven of the eight boys I took with me today...each clearly excited to post for this photo. 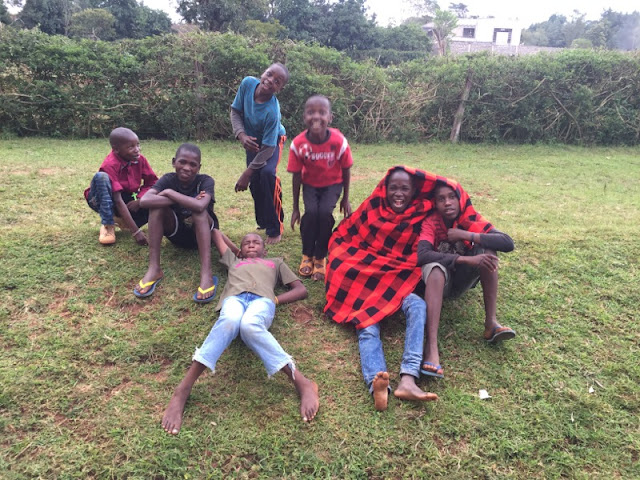 When we came back inside the gates, Allan wheeled up to me with this giant branch in his hand and asked for a picture. How can you turn down this smiley tree?! 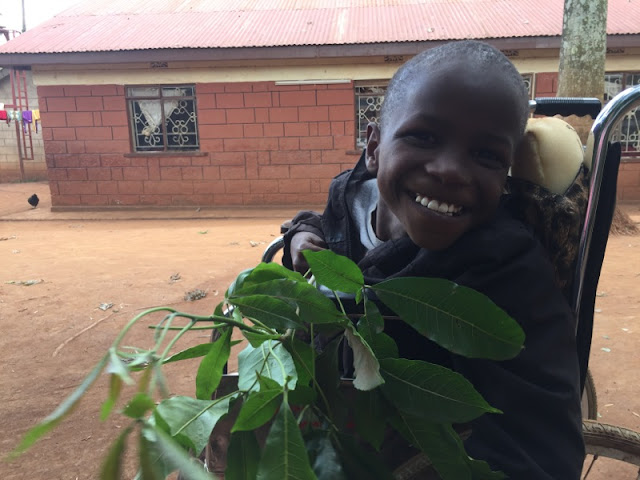 And then there was this pigtailed beauty. I can't begin to explain how much Linah loves her long hair. I wish the hair wasn't quite as heavy or I would try to recreate my prize-winning Pippy Longstocking costume from 2nd grade. (Who am I kidding? I'm definitely going to try this week!) 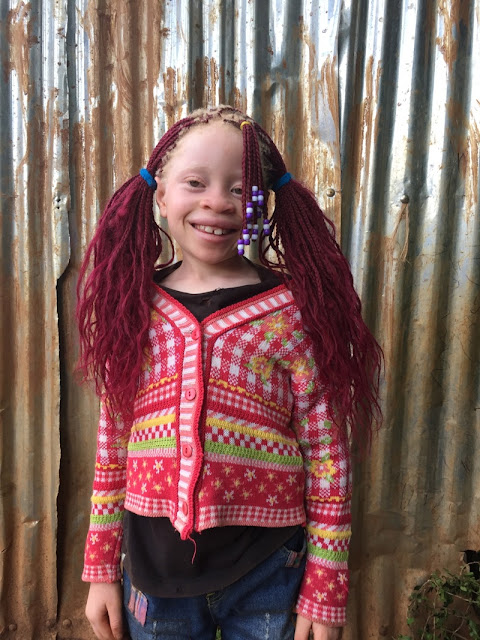 And, with that, I was wiiiiped out! I came home, expecting to eat dinner, do the dishes from all of house guests and blog before bed, but then the power was out for over an hour, so I sat in the dark working on this post and am now pretty unmotivated to do the dishes (I can be honest...this is a safe place, right?!)

Well, there you have it, folks! A post about today. Today! I'm fully caught up and ready to take each day as it comes--and tell you aaaaall about it. Are you ready? Are you ready for this? Are you hanging on the edge of your seats? (It was either a Queen lyric or a Destiny's Child reference...I assumed my audience would prefer the former. So, you're welcome, Mom!)
Posted by Allison at 11:21 AM

Love the Queen reference! And love all those pictures. Linah's hair is the best!

Lina's countenance grows more sweet and joyful with every day...her life is absolutely changed because of you and Sammy and PKC...and she's just one of 38...

LOVE love love love love!
I am hanging on the edge of my seat with Freddy Mercury waiting for the Pipi Longstockings photo. If you can find a monkey to stand next to her it will be the photo of the year.
Love your hair too!
I love you so much!