Let me walk you through one of the more adorable days I've had in a while--which, if you're looking at the sweet faces I'm around most of the time, is really saying something.

Bramwel came in from class and sat on my lap. As usual, one of the first things he said to me was, "Take my picture." As he looked at the picture I just took, he flicked through to pictures from the days before, naming each person he saw on the screen. It was very cute to hear the nicknames he has for each of the kids...especially some of the bigger boarding school kids, whom he called "My Augustus!" and "My Pascal!"

When we stopped on a picture of Male, he had a huge smile on his face. And then I remembered that I had some videos of Male from the day we brought her to the center.

I pulled them up and pressed play...and that boy sat for nearly an hour (until other kids wandered in and interrupted him) watching the same four videos on repeat. About fifteen minutes in, he'd memorized everything she says in the videos and began to repeat her as he watched. He loves Male. And, if you've ever seen a picture of the two of them, it's pretty clear she loves him too. 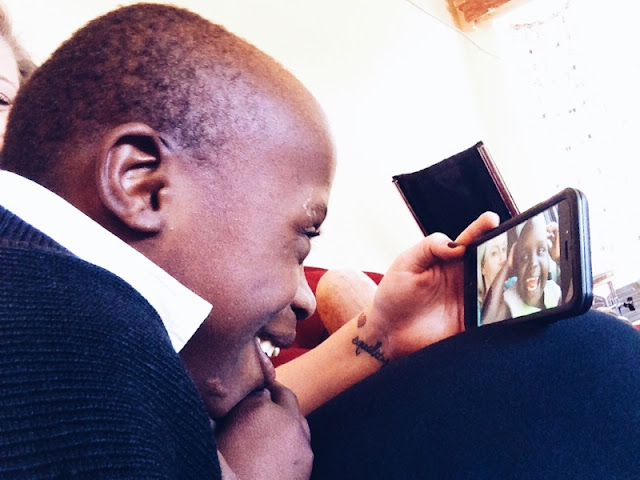 And then there are these sweet faces. The boy in the purple jacket, JJ, has the cutest little voice. Each morning, when he sees me, he asks, "How are you, Alice?" and I want to pick him up and squeeze his face. He is the youngest in a family that we have been working with for years (his three older sisters were at Oasis of Hope) so I think I have a special affinity for this boy...being one of my favorites is in his genes. 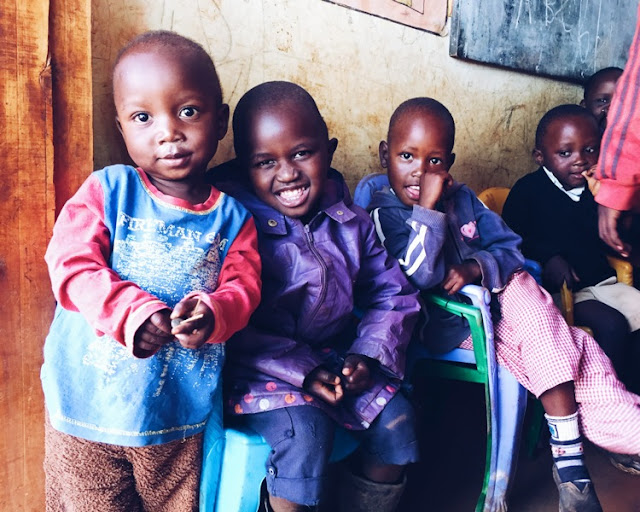 I turned around from the door of Baby Class and found a mob surrounding Sammy on the lawn...including Willie and Eric David sitting on a chair that Willie told me was a car that they were taking to town to get sodas...and would I like to come. I laughed and took a few steps toward the house, and then I noticed Bramwel hiding in this wheelbarrow. As it turns out, he was spending his morning trying anything he could to avoid taking a test. 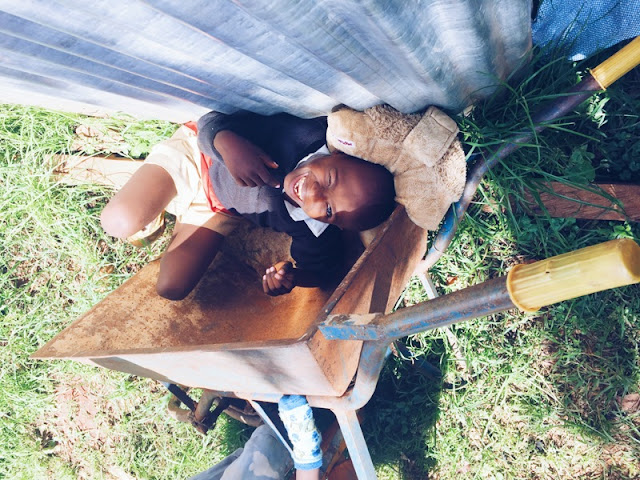 Sammy had been doing some work outside on a blanket when Willie and Bramwel bombarded her with demands to listen to Justin Bieber's "Baby." She found it on Spotify and the boys took turns holding the phone and dancing, to the same song, for over an hour. It really was all Willie did for the rest of the afternoon. Can you sense his excitement? 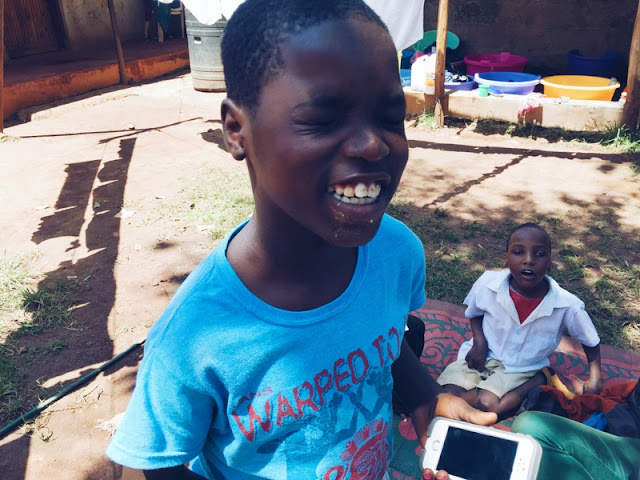 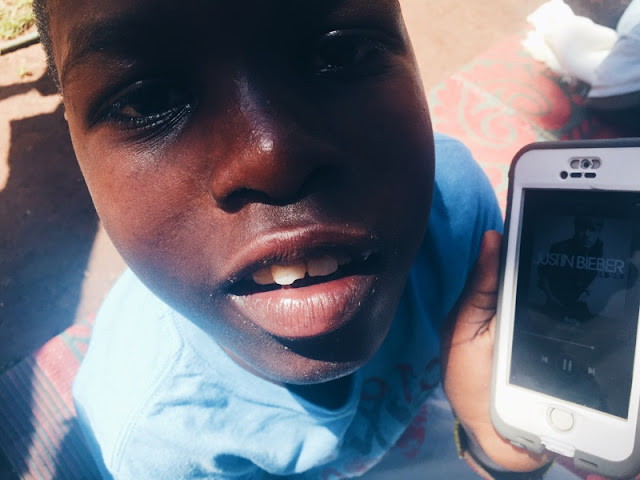 When the internet cut out and Spotify stopped working, I pulled out my phone, thinking I had "Baby" on there. I did not. But I did have some Taylor Swift, which seemed to do the trick. Bram danced and danced to "Shake It Off." I tried to take a video, but I was laughing too hard at his Cliff Huxtable dance moves to get a good shot. 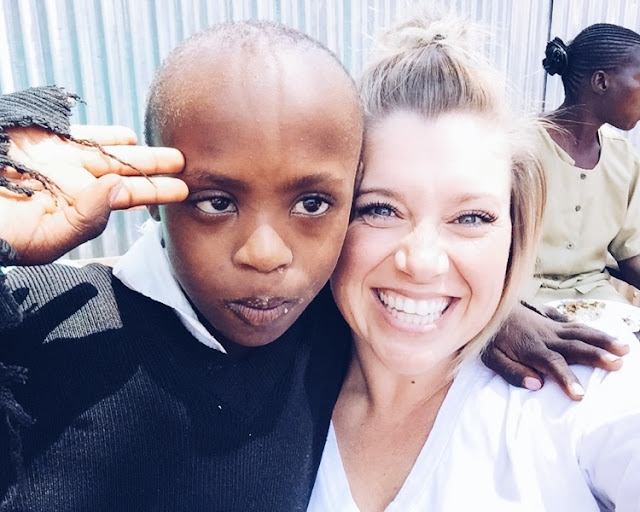 I saw the house moms bring out plates for lunch, so I made my way in to the living room to assess the situation (who was there, who needed to be grabbed from the classroom, who would need food brought to him/her, who would need to be fed?) and Zippee and Maureen were sitting side-by-side in their uniforms waiting for their turn to grab a plate. 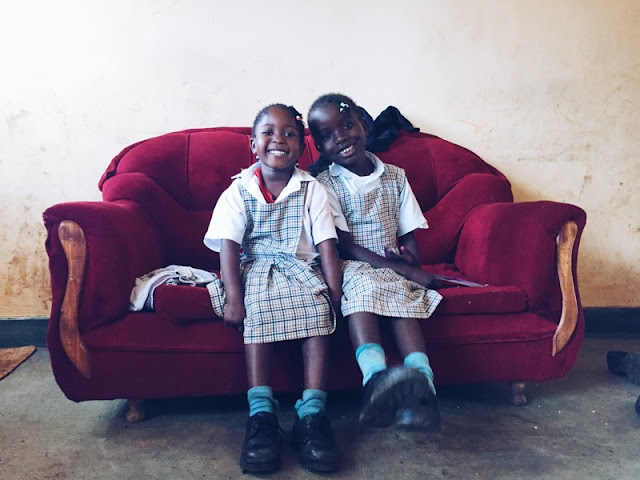 When lunch was over, but before they went back to class, we took a few quick shots. Maureen is trying to look extra cool these days to live up to the expectations of my grandpa. 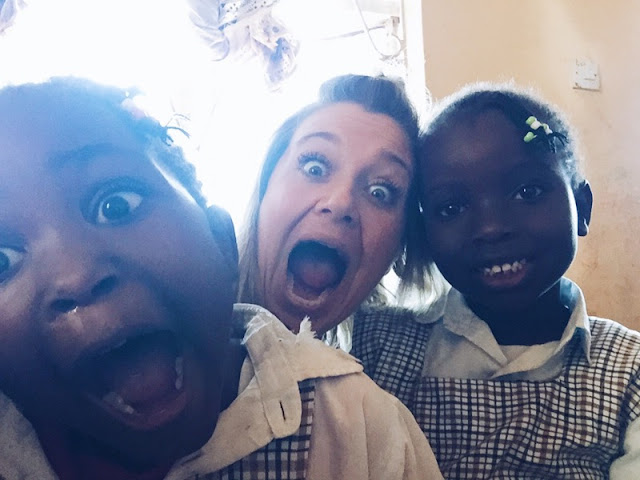 As we headed out to run some errands in town, Praise caught my attention and called me over to take a picture. When I understand his sign language, I'm not sure which of us is more thrilled...but either way, we are really excited to have successfully communicated. Of course, as soon as I pulled out the camera, a flock of kids gathered round to be part of the photo. 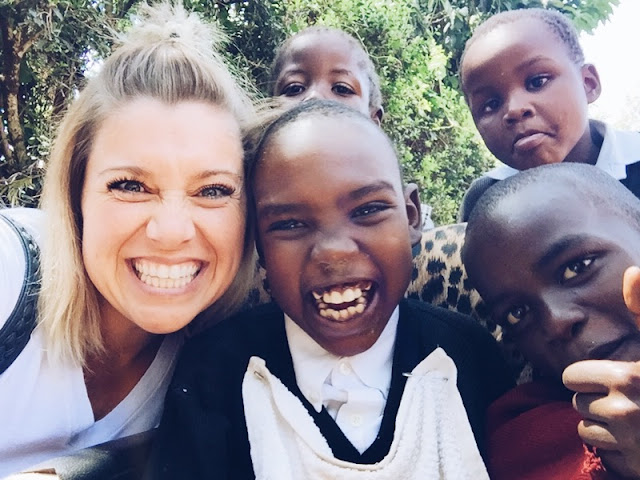 There are days that I come home tired (mentally or physically) and flop down on a chair and look through pictures and am reminded (about why I am so tired) of how worth it it is to be so tired. And then there are days like this one, when I come home dirty, but energized, and look through pictures and think, gosh this was a fun day...I can't wait for another tomorrow!
Posted by Allison at 6:44 AM

Sooooo great!! I love each of these pictures and each of these people!!
Especially you.
I hope you do get to sit down and rest a bit.
You are certainly appreciated and loved.