I Make A Better Thief Than A Locksmith

Here's a story about the time I was a real jerk, but also kind of awesome.

We've been playing this game when we're stuck in traffic where we lean out the window and try to get the people we pass to give us a high-five or 'knuckles' ("gota" in Swahili.) We've made up an entire point system (10 points for a man, 20 for a woman, 30 if we are moving, 40 if they are moving too...and so on.)

On this particular afternoon, the van was filled to the brim with food, kitchen utensils, and even mattresses for the home of one of the Center Moms who will keep 5 of the boarding school kids for the month (until they go back to school in September) which meant I was sitting in the way back.

As we drove through town, people were obviously staring at this packed van...and the two girls yelling "hey! gota!" out the windows didn't help. We were racking-up points from bicycle taxi drivers, shuttle van drivers and pedestrians. At one point, Sammy yelled from the driver's seat, "Grab that guy's mandazi! (sort of like an unsweetened donut)" as we pulled up to a van full of passengers (conveniently parked near a speed bump, so we were definitely slowing down, giving me plenty of time to act.) I lean out my window, the driver looks at me and smiles and says "Hello!" I act like I'm going to grab his snack and, at the same moment, he lifts the bag of mandazi toward me (I think he did so as part of his gesture of greeting me) and I grab it and we're over the speed bump and on our way. All of us laughing our heads off at the perfect timing and also what a complete jerk I am to have stolen this man's afternoon snack! 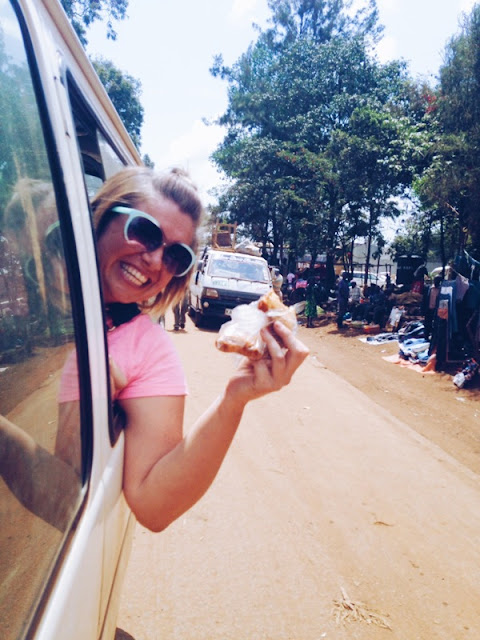 (I felt guilty about this for at least a week. And the house boys have been calling me thief every time we get in the van, but also encouraging me to do it again so they can watch it happen this time.)

Last week, Sammy went to Nairobi for a few days to drop off Sara and pick-up five new guests (including her mom, sister, and best friend.) While she was away, I spent a ton of time preparing our home for their arrival: setting up beds, hanging mosquito nets (which proved more difficult than I had anticipated given that our walls are made of concrete and nothing will stick to (or in) them!) grocery shopping, posting notes to help make their stay easier (how to have a hot shower, wi-fi password, please don't flush while the shower is running, etc) I also spent three consecutive afternoons waiting for the plumber, and then the locksmith on the day I was locked out of the house and then the window repairman on the day after my landlord had to break a window to let me in the house.) Oh yeah, it was an eventful few days!

I also spent a few hours at the Center each day...obviously. Here are some pictures to prove it.

When there is a good show on during break, it draws a crowd. 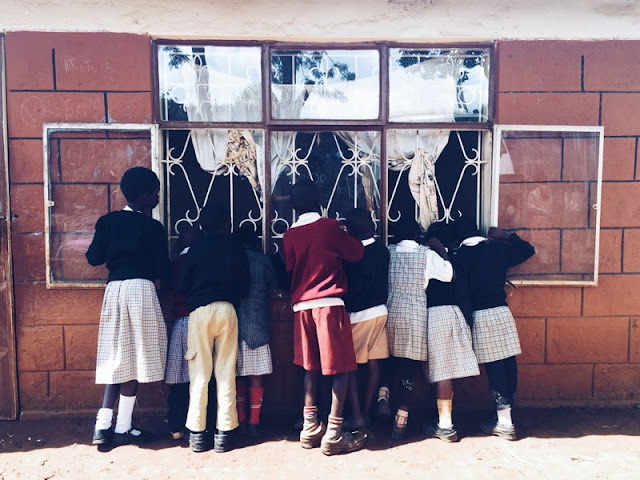 Check out theses adorable faces. The boy on the far right is the son of one of the Oasis of Hope house dads. (He walks to school with his porridge in that little bottle around his neck every morning.) 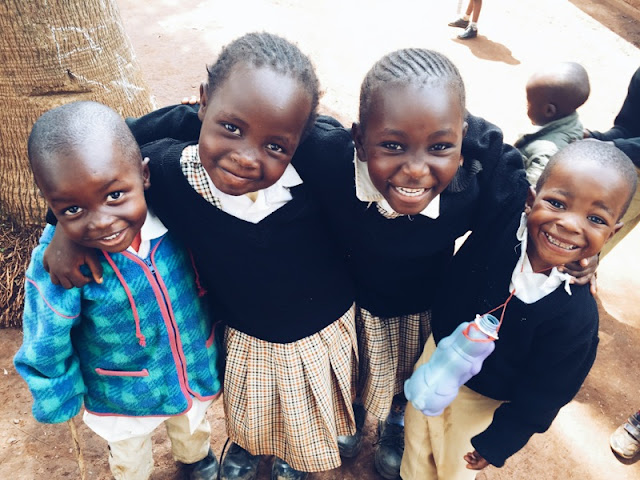 During lunch on Wednesday, we had our daily thunderstorm, so the kids ate in their classrooms and a large group of us huddled in the living room. Here's Isaac (pants-less after an accident) with his big bowl of rice and lentils. 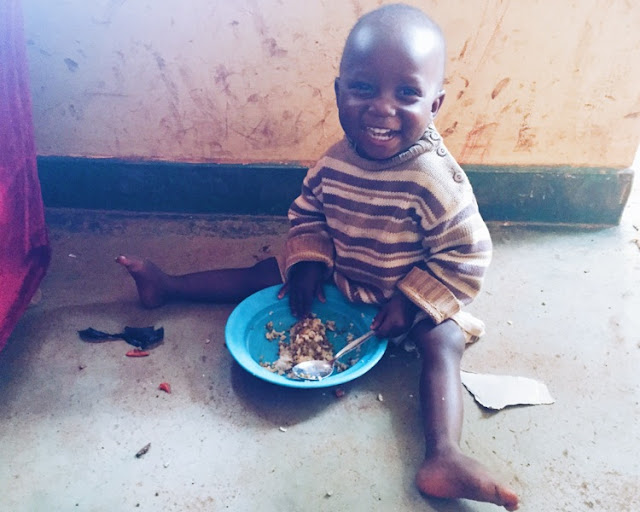 Sara had left three bottles of nail polish, so I spent most of the day painting the nails of house moms, laundry ladies and even a few kids: 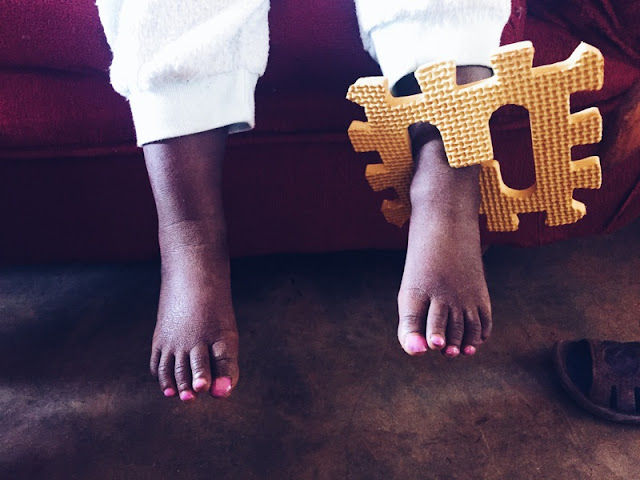 Sara had left a stack of letters written by American High Schoolers to the Precious Kids Center kids. Bram was so excited to show me his letter when I came back from town. 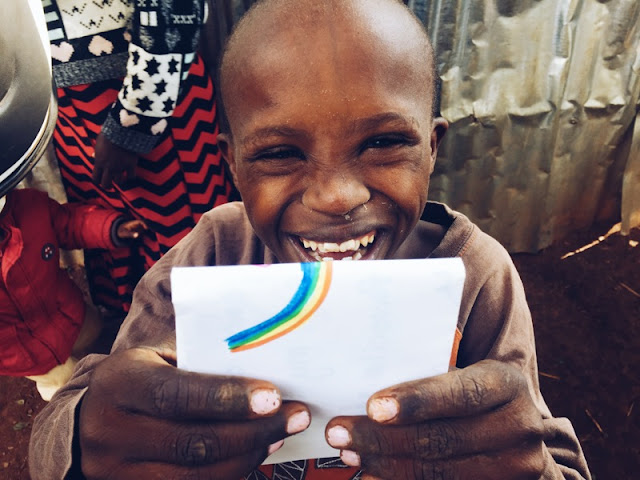 I'm getting used to this driving-in-dirt-roads-on-the-other-side-of-the-road thing, but there are still a few tricks to this particular car that I haven't quite figured out, so I took Phoebe (the social worker at the Center) along to help me open the gas tank. (And I was really glad she came along, since I hadn't even thought that the car takes diesel!)

And, of course, I'll make up any excuse to take Suzie with me. She loves to be in the car. 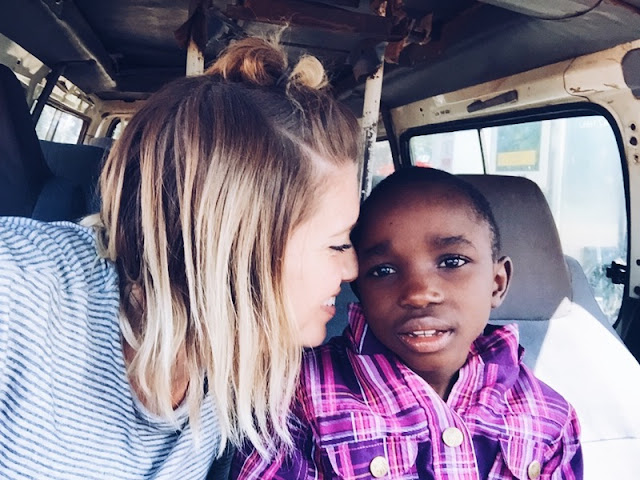 That evening, as I waited for the plumber, and watched Bloodline, I also did some reading, planning, and praying about the first women's meeting we were to have on Thursday morning. I was nervously excited about what it would be like...read all about it tomorrow!
Posted by Allison at 10:36 PM

I love your stories. And the trials. And the smiles. And you.

So adorable. I love reading your blog. The kids are so cute, and so are you! xoxo

We've been playing this game when we're stuck in traffic where we lean out the window and try to get the people we pass to give us a high-five or 'knuckles' ("gota" in Swahili.) We've made up an entire point system (10 points for a man, 20 for a woman, 30 if we are moving, 40 if they are moving too...and so on.)locksmith kole - indianapolis

What can you tell me about this locksmiths service?
http://24locksmithjerseycity.com/
Is it safe to use it if I lost my key?