The last full day with the team was just that: full. I woke up early and went straight to Precious Kids Center where I picked up Phoebe and Junior (who was dressed and ready for a CT scan to check that his shunt was functioning properly after he'd fainted a few days prior.)

I drove us to the hospital (I'm getting pretty good at this opposite-side-of-the-road gig!) and Junior played games on my phone while waiting his turn. We took this picture to send to Sammy while she was in Nairobi...he is a really cute kid. 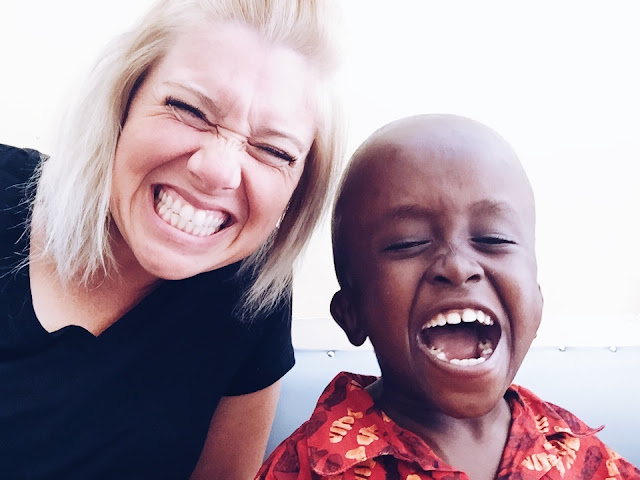 When we arrived back at the Center, Mike took one look at the car (and the strange angle of the front passenger tire) and told me that I shouldn't be driving this car until it was repaired. So, he dropped me at Steve's to wait for the team, he dropped Phoebe back at the hospital to wait for Junior's test results, and he went to town to get an estimate on the car.

About an hour later, he came back and told me it was going to be about $100 to fix it. I paused (since I don't have that kind of money to spare) and told him I'd have to call Sammy to see how she'd like to proceed.

One of Steve's team members overheard the conversation, ran in the house, and came back with the money to fix the car. I nearly burst in to tears at this generosity! I handed the money to Mike and he took the car to be repaired. I turned back to the team member, with a grateful heart, and said thank you a few more times.

We cleaned up lunch plates (egg salad sandwiches and a huge bowl of stove-top popcorn) and headed to town to pick up Steve. Once the Jeep was full, we made our way over to the women's prison.

I first visited the Kitale prison with one of Steve's teams in 2005. I have so many memories from those visits, including this one from 2007, which is, easily, one of the most memorable Kitale experiences. And, a close second, this one from 2009.

Well, today gave those two memories a run for their money.

We were greeted by Bernard, the prison chaplain, as we unloaded the gifts from the back of the Jeep. He introduced himself and then said to me, "I think this is not your first time, right?" I smiled and said, "Good memory! I've been here with Steve many times!"

He then escorted us inside and introduced us to the female warden who walked us around to the back of the building where we were greeted by a huge crowd of women in stripes singing. Photos are not allowed in the prison, otherwise, I would love to show you the scene: grass lawn, a crowd of smiling faces in grey and blue stripes, with a cornfield and bright blue sky backdrop. It was remarkable.

Bernard began our time together, and introduced Steve who asked how many of the women in the prison were from Kipsongo. Many raised their hands...which made for a perfect transition to Caren's story. She grew up in Kipsongo and is now living her dream of teaching and finishing her credential. The entire time she was speaking, all eyes were on her. The crowd was silent and fixed on her every word. At the end of her story, the women burst in to applause.

Bernard shared a bit again and then I stood up. I am working, really hard, to learn Swahili, so I tried to do my entire introduction in Swahili. It was only about four sentences, but I did it. The crowd stood up and we sang and danced together.

Leila shared her story of accepting Christ and finding freedom a few years ago and then Steve shared about the forgiveness and healing that comes from God's love. He asked if anyone would like to accept Christ today and dozens of women stepped forward. They began to pray, and cry, as Steve spoke a blessing over them. It was a beautiful moment.

Lastly, Steve gave the gifts we'd brought: soap, maxi pads, lotion, and blankets for the mothers. (Children are allowed to stay in the prison with their moms until they are 4.)

The women began to sing as we started to pack up. Kamari and I began to dance with them and, soon enough, even the matrons (guards) were dancing with us! It was a very fun, spontaneous party!

Before we left, the guards asked that Steve stop-in and pray for a possessed woman that had been making animal noises for the entire three weeks she'd been in the prison. (She stole from someone who, apparently, put a curse on her. Since then, she'd been making the same noises day and night for three weeks.) Kamari, Steve and I went in to see the woman. Steve clarified that he'd not taken a course in this, it could just as likely be a psychological issue as possession, and--he stressed this point--we have no power on our own, only the power of Jesus. With that, we began to pray. The woman, held by two other prisoners, became rigid and started foaming at the mouth. She shook and spat and gagged as several of us prayed, loudly and passionately, in the name of Jesus that anything that was not of Him would depart. That the power of God is stronger than any power of this world. That this woman would be freed, healed, whole in the name of Jesus. After a few minutes, the woman stopped shaking and fell asleep. The guard were instructed to bring her food and water, to allow her to sleep, and to make sure that the other girls did not mock her for this, but instead, remember and rejoice that Jesus had healed her.

We prayed once more, dried our tears and headed out to the Jeep. We walked out of the gates and Mike was there with a full repaired van! Such a great surprise!

We took a quick photo together to commemorate the incredible day and then headed out for our next adventure! 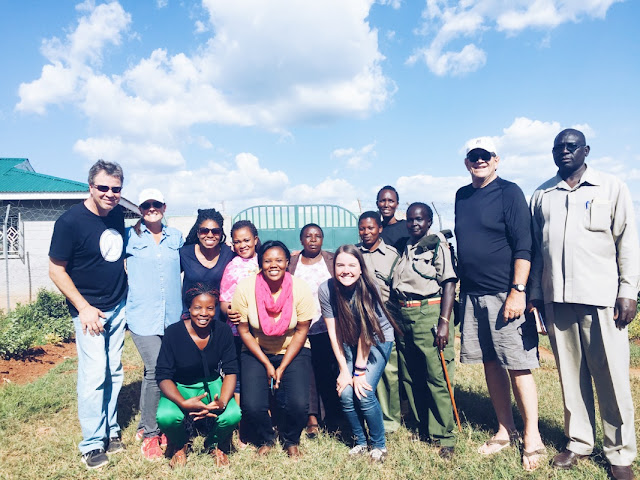 Oh, I didn't want to miss my chance to be part of the group shot! 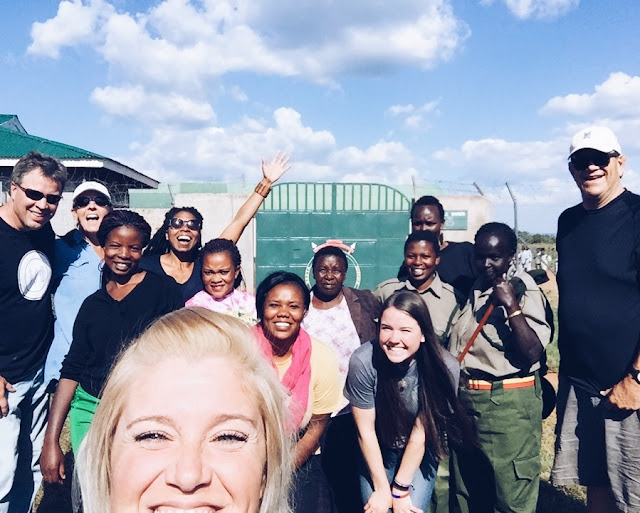 With everyone in the van (which drives so well now!) we made two quick stops: samosas, chapati and sodas at the gas station and then at the house to pick up our supplies and use the restroom. With tubs of house gifts filling the trunk, we drove down the hill to start our tour of Shimo la Tewa slum.

We parked the van at the top of the hill and walked down to cross the bridge over the stream in the middle of the community. 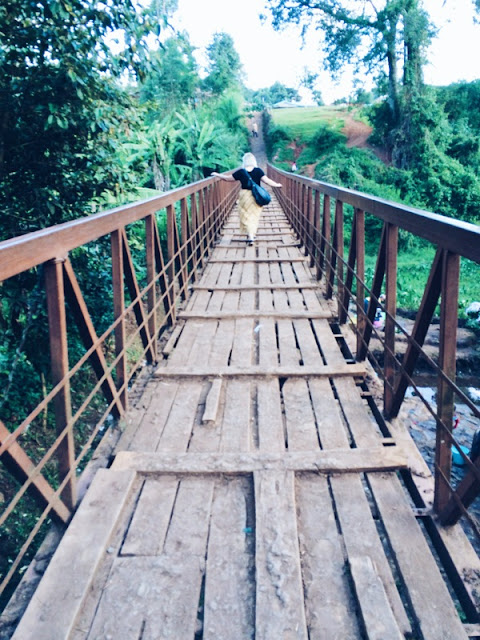 We looked down to see many women and children collecting water. 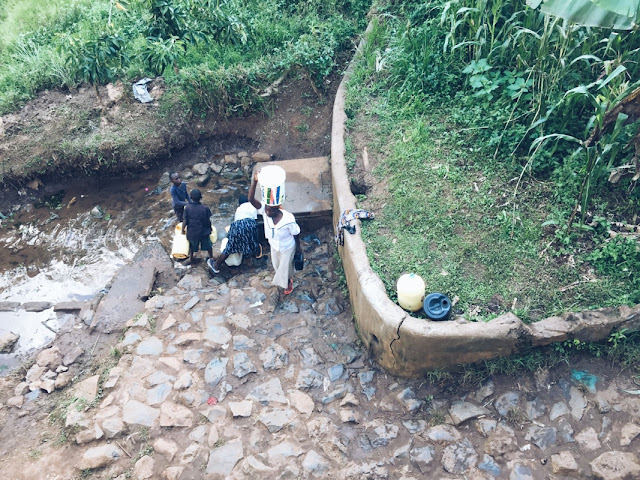 As precarious as the bridge is, I stopped halfway across to take a picture of this landscape! 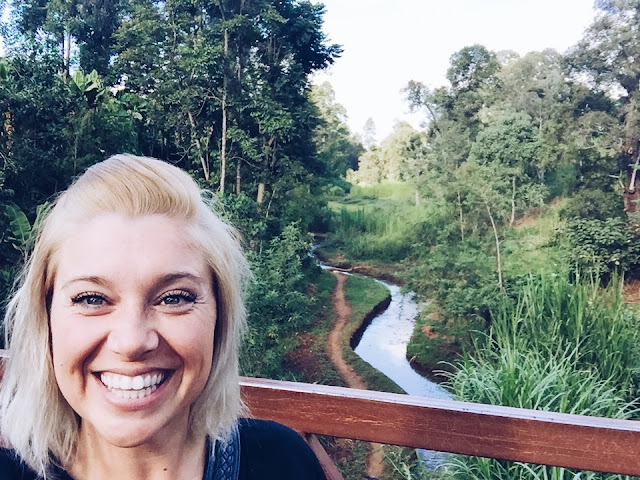 There are several families in this area that we've been working with for years, through Oasis of Hope, and many more that attend the Precious Kids Center school. We chose 5 to visit on this afternoon.

The team gifted each family with a large tub, two kinds of flour, laundry soap, bath soap, lotion, salt, sugar, tea, and maxi pads. We introduced ourselves, gave the gifts, prayed over the family and then said our goodbyes. Quick, but after the long morning--and with the rains coming--we had to keep moving! 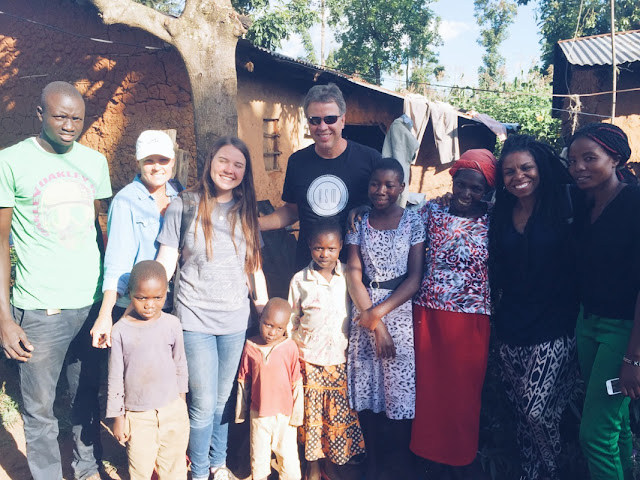 We made the long walk around to the next set of homes. On the way, we ran in to a few kids from Precious Kids Center school--even one of the laundry women--a few younger siblings of Oasis of Hope kids, and the Principal from Greenfields Primary School. It was a fun little walk! 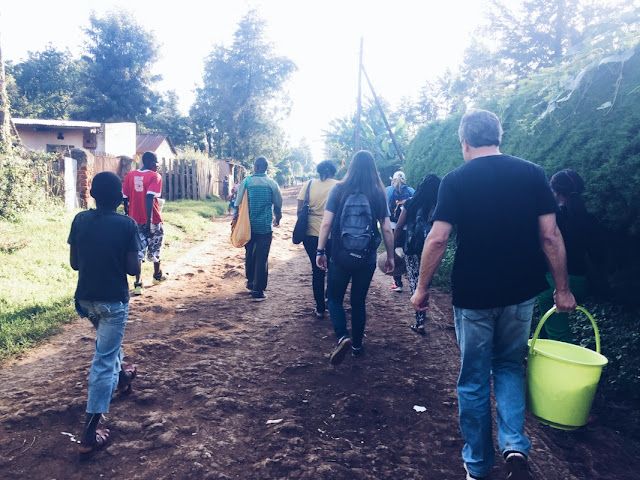 Peter...the youngest of a family from Oasis of Hope (and one sibling who lives at Precious Kids Center) 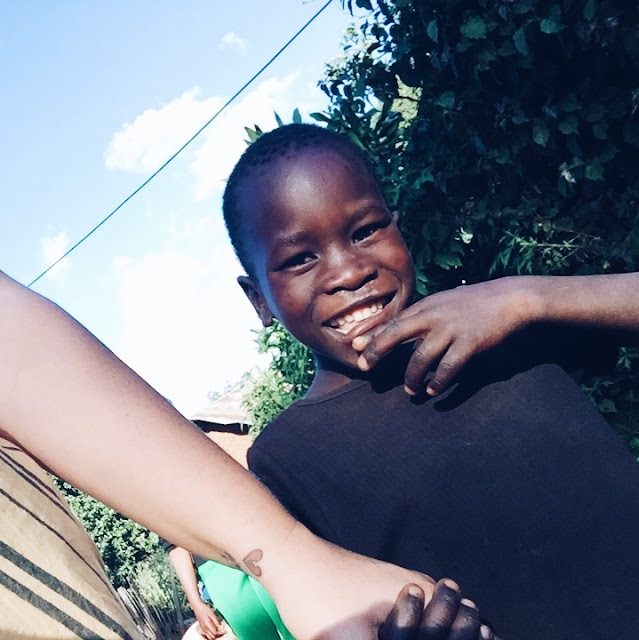 Brian (from PKC school) and all of the neighborhood kids 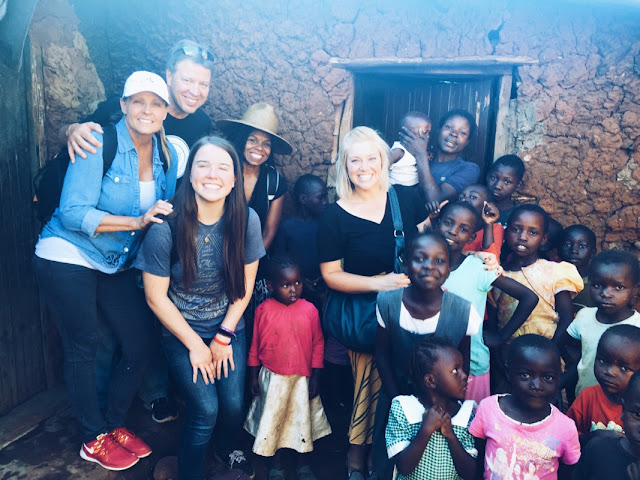 We stopped to entertain the crowd while the rest of our crew caught up. This was a version of 'Simon Says'. 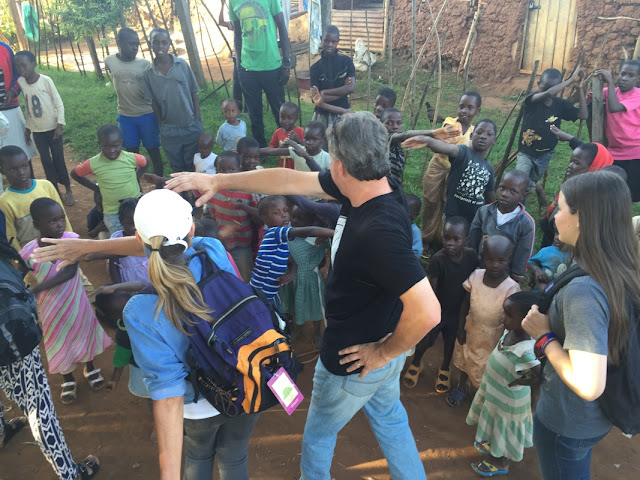 We ended our tour with my favorite family in all of Shimo! Here are five of the seven kids I have known and loved for years: Lucy, Erika, Peter, Mama, Christine, and Ajix. 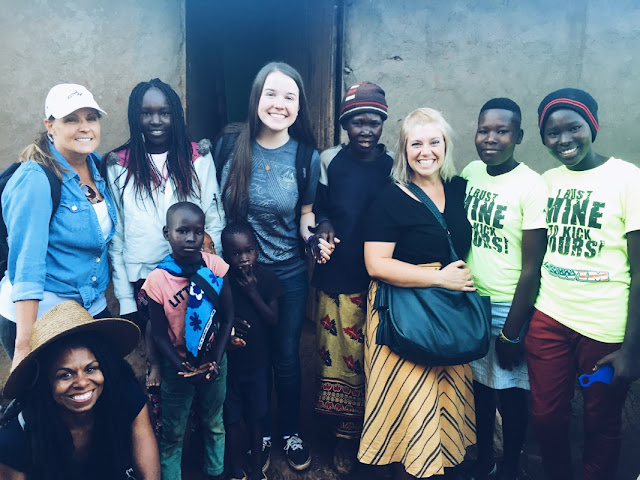 A tighter shot with all of them! 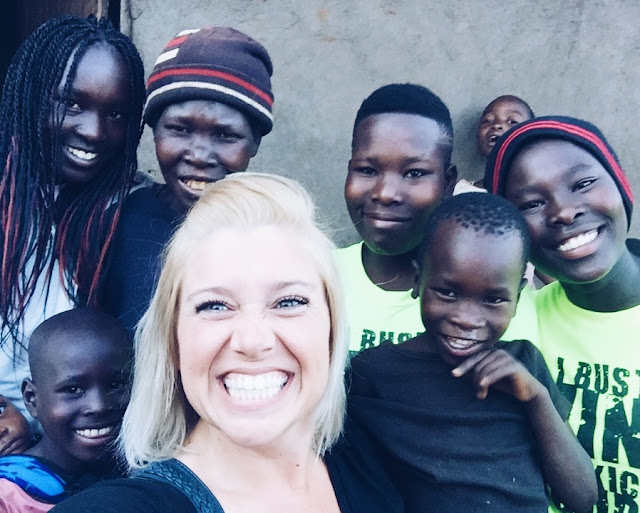 One more dinner with Steve's team, processing all that we'd seen and experienced (today and this week) and I said my goodbyes. They had a 3am wake-up call to make their flight to the safari park, which I was grateful to not be needed for!

I spent the entire next day at home. I slept in, had breakfast in bed, did some laundry, painted my nails--even shaved my legs like a real woman! That night, I got this photo from Sammy in Nairobi. (Jabal had gone with them to make it easier to get him to the hospital in Kijabe to have his stitches removed. This kid had the time of his life on safari and in Nairobi...with all of this attention. So dang cute!) 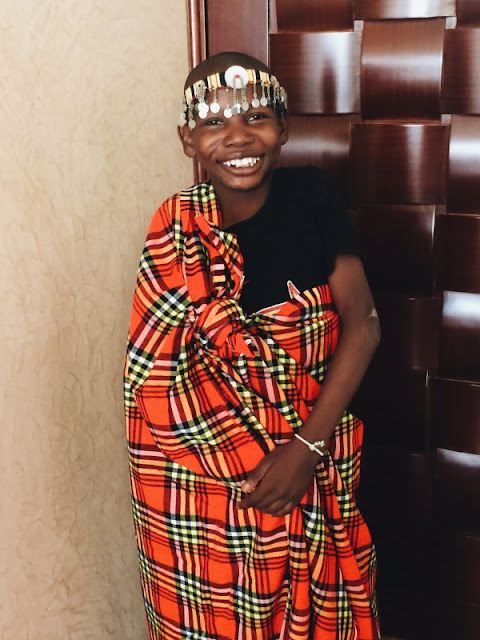 When I hadn't left the house all day, my landlord came over to check on me. I told him I was fine, just enjoying my time alone. A few minutes later, his daughters knocked at my door with dinner: chicken and rice! It was a wonderful way to end my day of relaxation (before everything picked up again on Friday!) 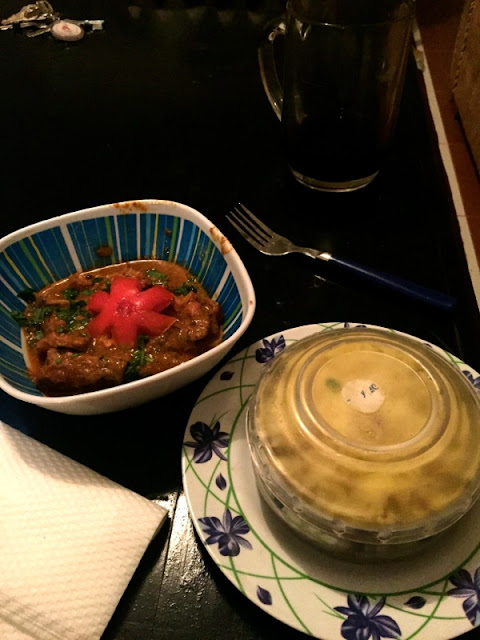 Thanks for making it through that marathon post. I promise several shorter posts are in your future. The team is gone and we are back to our "normal" routine...the days are full, but not nearly as long.
Posted by Allison at 11:20 AM