One of my favorite parts of having Steve's team in Kitale is that his schedule always include things that we would never do on our own: he travels to towns we would not typically visit, he has access to places in town where they would not typically let us in, and he's able to be generous beyond what we could afford.

On the Saturday that he was in town, all that we had on our schedule was "Women's Day." Neither Sammy nor I had any idea what this meant...where we would go or what we would do once we got there. But we showed up at Steve's ready to go anyway. And, somehow, we didn't realize we were matching until Kamari pointed it out (and asked to document it) at Steve's. 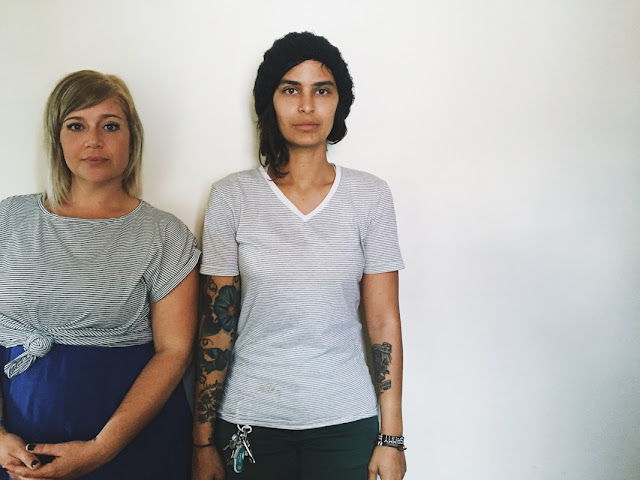 I was in a dress, classic, which I thought worked well for a women's day. Joke was on me...Steve loaded us up in the back of a lorry, sitting on bags of beans and maize, for the nearly 45-minute drive to the village of Katchebora. (I, of course, sang "Katch-e-bora star and put it in your pocket..." to help me remember the name of our destination.) 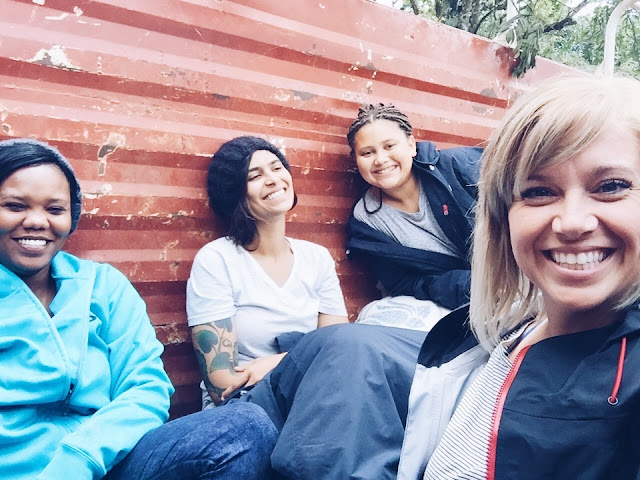 We stopped at the gas station and they tossed bags of chapati, samosas and sodas at us and then closed the gate once more. 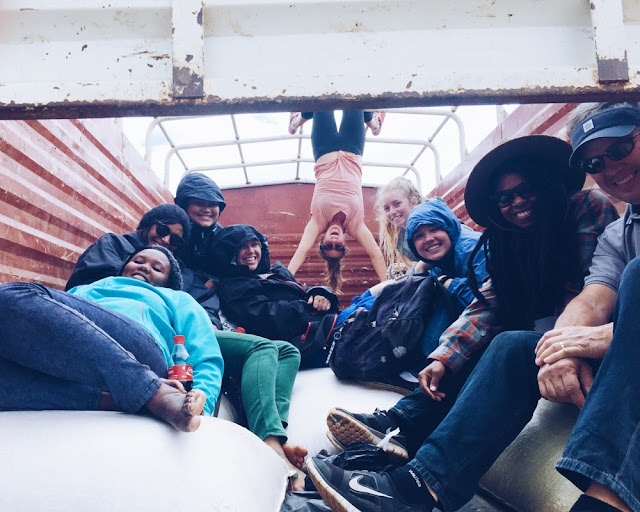 Steve greeted us when we arrived. 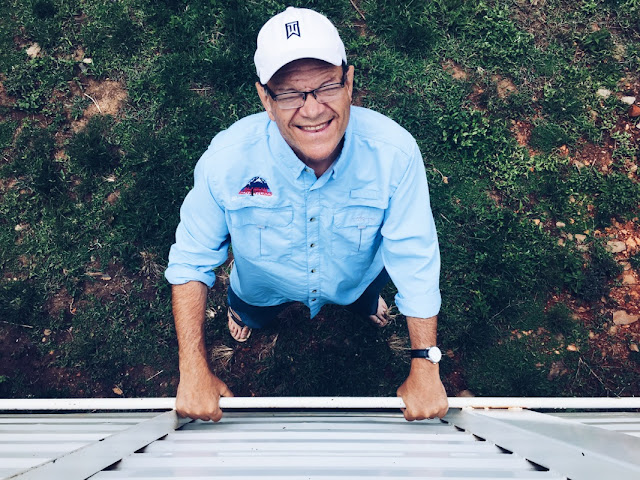 He had pieced together a rough outline of the program on the ride up. Christine, who is running for a government position in the next local election, who is also the one who brought us to this village, began the morning by introducing herself and greeting everyone. Then Sammy said hello and told her story of moving from America and opening the home for kids with special needs.

And then it was my turn. Christine explained that everyone has a heart for different people of the community and that mine has connected to single moms who are prostituting themselves to care for their families. The room cheered. Then she introduced me. 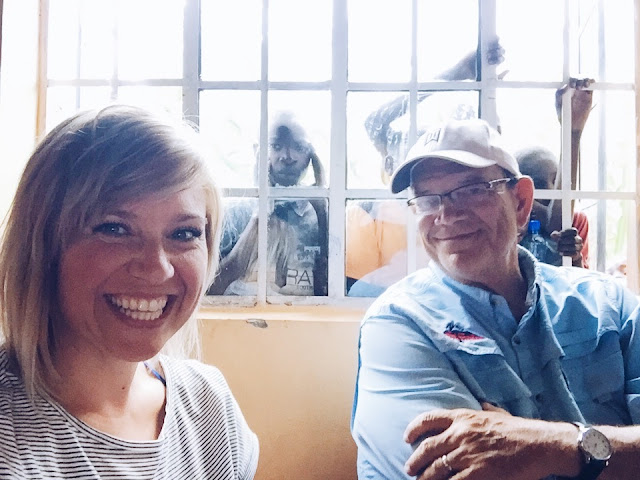 I greeted everyone and read a passage from 2 Chronicles about praising the LORD. I told the women that I love to sing and asked if they would sing with me now. If, as the passage said, our hearts would shout of the LORD's goodness and faithfulness. They cheered again. So I started singing the one song I know in Swahili. (It's my go-to trick when I'm put on the spot.) I could see the women start to look at one another and smile...this white girl is singing in Swahili! The room erupted in song. We sang a few verses and choruses of the song before I stopped and asked the women to please grab an American team member's hand and dance with them. Again, everyone cheered and laughed. We danced a few more choruses and then applauded the end of the song. I turned to Steve and said, "I could do this everyday." 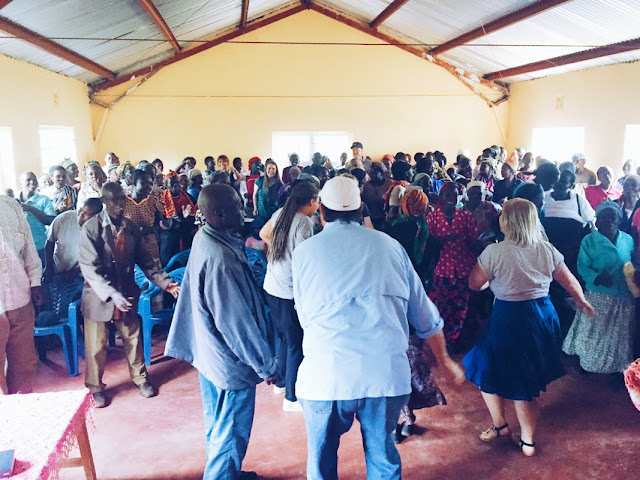 The rest of the team members came up to introduce themselves and Steve shared quickly about his excitement to have been with these women today. He explained that Christine had told us about this church and insisted that we come visit. He told them we didn't want to show up empty-handed...that we had brought gifts for each of them.

Christine pulled a small group of women up on to the stage and had them pose with the gifts: maize, beans, mixed lentils, and two packs of maxi pads. 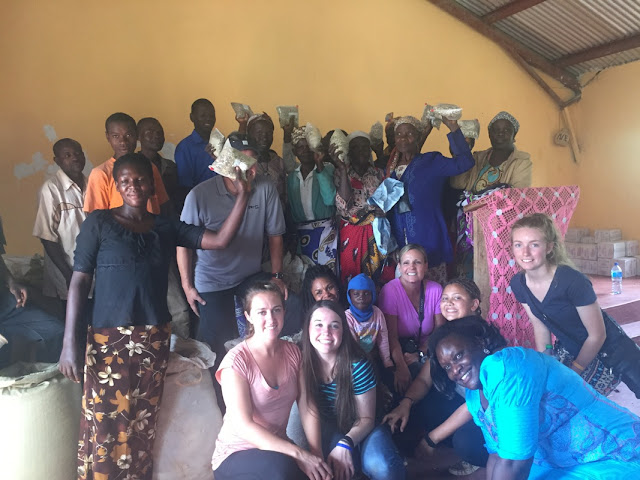 They set-up an assembly line, the women pulled out bags or scarves and made their way up-front to receive their gifts. 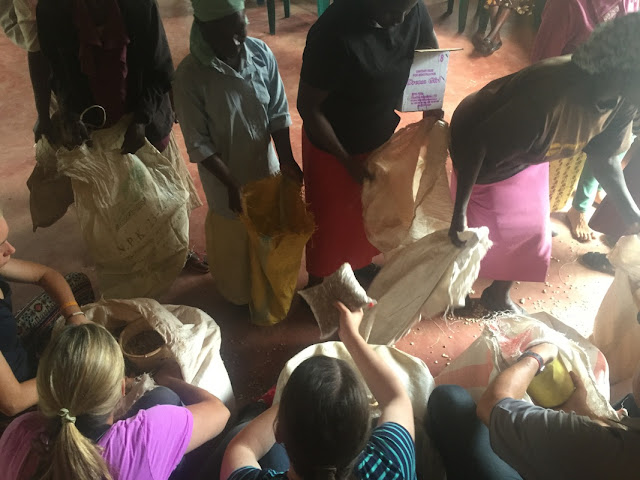 As the line died-down, I felt less of a need to help with security or documentation and I watched the crowd of children grow larger and larger just outside the door. So, I punched two holes in a box, put it on Steve's head, and led him outside to chase the kids around. I was calling him PadMan. They loved it. In the end, Steve caught a kid and gave him the mask to keep the game going. 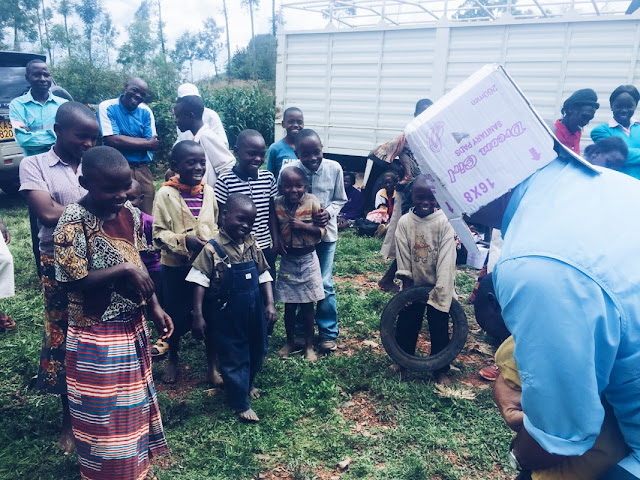 The sky turned gray and Sammy said, "Steve! We gotta go to beat the rain!" Fortunately, a seat had opened up in the car, so I didn't have to get back in the lorry. Sammy and the other girls bundled up in Oakley jackets, put the hoods on and braved the rain on the drive home. We stopped for lunch (pretty much dinner at that time) and then came home for naps. It had been a long day after a long week...and it wasn't over yet! Everyone was ready for a nap.

Hours later, we bundled up once more and went to Steve's for the blanket drop. Steve and his team purchased 90 blankets, we cut a hole in to each one (to create a poncho effect) and packed up the two vans to head to town and search for sleeping street kids. It's really cold in town at midnight, so we tried to bundle up as best we could. (Neither of us actually wore these outfits to town.) 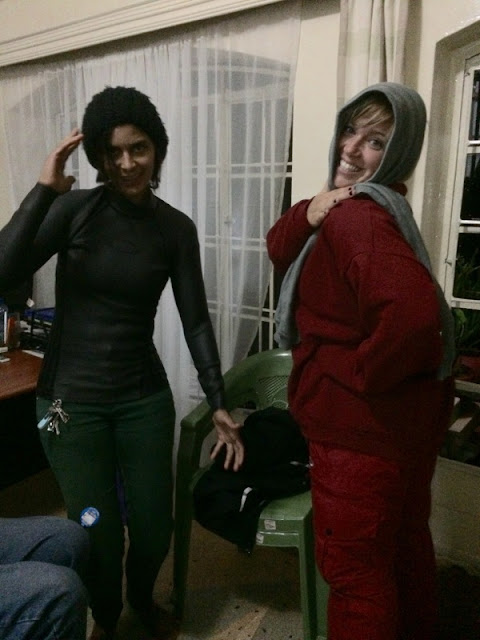 Sammy knows many of the street kids from years of daily visits in town. She had recently been asking where they sleep, so she knew exactly where to take us. We pulled up and found a line of boys (ranging in ages from about 11-16) sleeping in front of the hardware store. We all climbed out of the vans and each grabbed a blanket. Sammy went first, to show us how it goes. She tapped one boy on the shoulder and said, in Swahili, "Hi. Take a blanket!" The boy opened his sleepy eyes, obviously confused and then said, "Sammy?!" took the blanket with excitement and said, "Thank you!" We went down the line, waking up one boy at a time, handing them a blanket and watching their excitement. One boy said, "Do you have candy?" and I said, "Not now." He replied, "That's okay. Blankets are very good...it's is really cold tonight." So sweet.

We had been instructed to take as few photos as possible. But since these boys knew Sammy and were so sweet, I asked if I could take a picture. They all excitedly agreed. I took one and the other boys said, "And me! And me!" I wandered down the line and took a few pictures before we hopped back in the vans to find another line of kids. 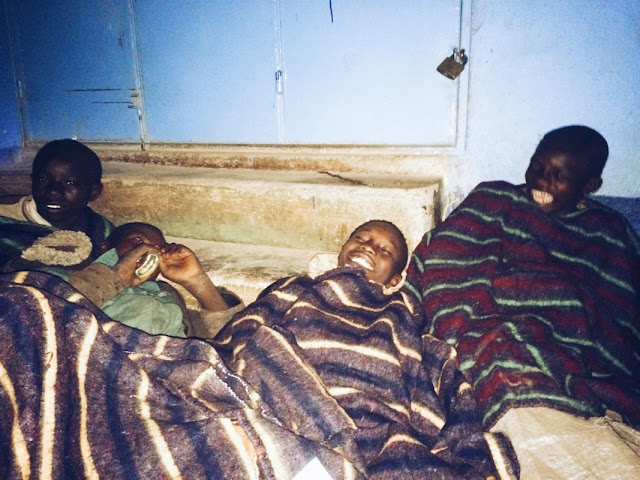 We returned home around 1:30 and I was wide awake. My brain was spinning with thoughts about what we'd just seen and how to help the first-timers in the group process what they'd just seen. I have been on several blanket drops over the years...and it's never an easier to accept what we see. It's never any simpler to understand a bunch of young kids sleeping on the streets, huddled for warmth...and it's especially hard when I can hear the rain pouring during the night. I have some friends who are developing a plan to put an end to this. It goes without saying that I am hopeful for their success.
Posted by Allison at 5:40 AM