On Wednesday morning, we had some issues with the van, (the door had come off of the hinges and was stuck "closed"--you can see from the photos that it was still about 2" open) but with places to go and people to see, we couldn't let it stop us. We grabbed a step-stool (end table) from the house and loaded up the van the only way we could: through the window. Fortunately, it was fixed that afternoon and we only had to suffer this embarrassment three times. 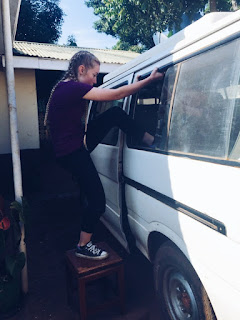 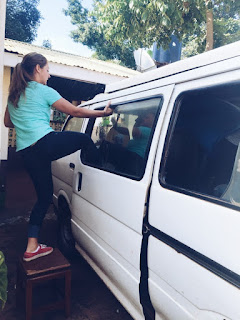 When we arrived at Steve's, they were unloading the tubs of supplies and donations the team had brought in Rubbermaid tubs. At the start of the trip, everything is unpacked and sorted so that each morning, a tub can be filled with items to be distributed at one of the locations we'll be visiting that day. In the midst of all of this, Steve gifted Sammy and I matching Oakley rain slicker coats. I've never been so excited to receive free Oakley apparel...that coat is warm! 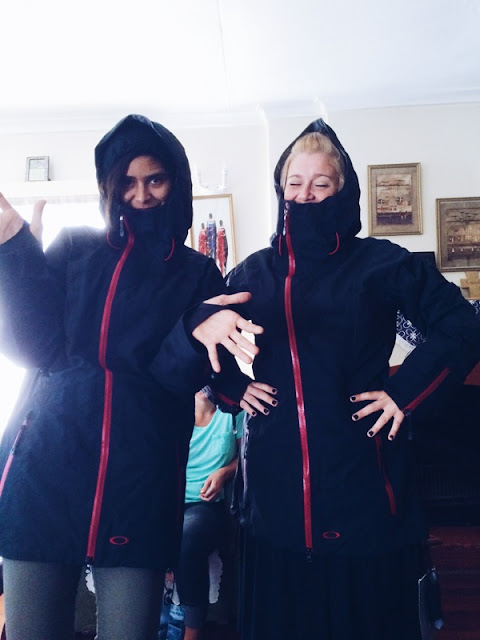 Steve's favorite way to begin any trip is with a tour through town. This gives the team a good grasp of Kitale, a chance to shop for any snacks they might want or necessities they forgot to pack, and, as we walk, it allows them to meet the team of Kenyans and Rwandans that will be traveling with them over the next week or so. We begin at one end of town, walk down to the huge superstore at the other end of the main street and then circle back toward the vans, stopping for lunch at the newest center on the way.

One of the first stops is to Mr Shah's. He is a long-time friend of Steve's and is always so happy to chat with him over a Red Bull. Being that the team was still a bit jet-lagged (and a few of Sammy's family and friends had started to feel the effects of staying up until midnight after long days) the 6-pack of Red Bulls was well received.

In the meantime, the stock guys watched from the back as the swarm of Americans chitchatted and drank energy drinks at 10am. 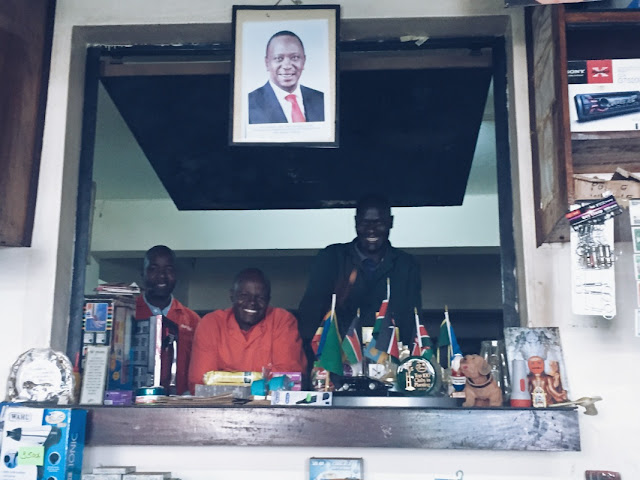 Then we walked across the street to visit a shop owned by our Rwandan friend Juliette. She was a street girl in Kigali when she met Steve with her best friend Hannah (and Hannah's brother Emmanuel.) Now, years later, she and her husband own a shop in Kitaletown and have a beautiful 2-year old daughter.

As we waited for the team to make introductions and look around, Sammy entertained the rapidly growing street boy following that was now traveling along with us. 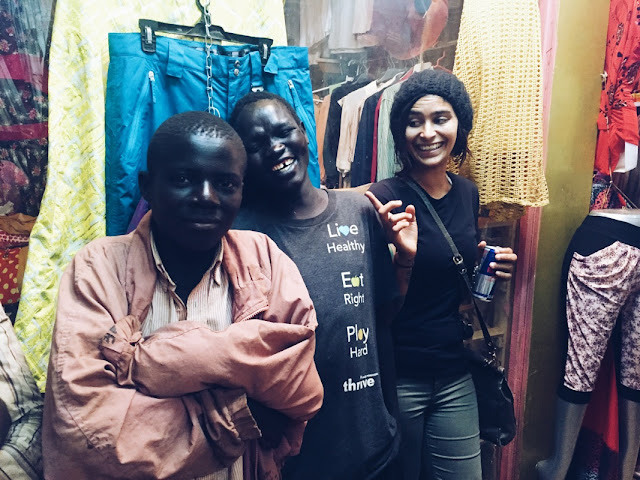 We finally made it to the superstore with about ten street boys in our pack. Sammy's mom, showing a bit of where Sammy's compassion and care stems from, wandered through the store picking up packets of milk and biscuits, while her friends bought a few loaves of bread. When we walked outside, Sammy called the smaller street boys over to the car and handed out one of each item to the boys. These three sweet kids said thank you and agreed to let us take their photos. 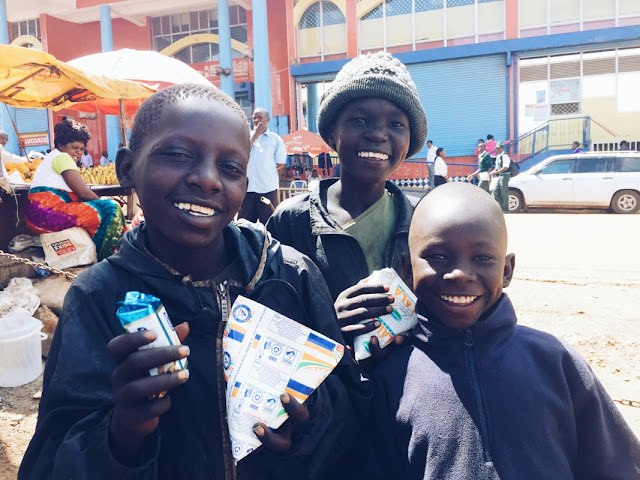 The team followed me to our lunch spot (we bought a bag of about 7 avocados for $2 on the way) where we had the restaurant set a table for 17. (and it was still not enough chairs!) We placed orders and sipped sodas while we waited for the meals to be served. In the meantime, Sammy ran back to the kids house to check on a few things, and brought Allan to town to buy his very first pair of shoes! Allan's cerebral palsy meant that his feet were stuck in a pointed-toe position. The surgery he had a few months ago stretched his Achilles heel so he can begin to learn to walk flat-footed. He was so happy and so proud to show off his new shoes to the team! 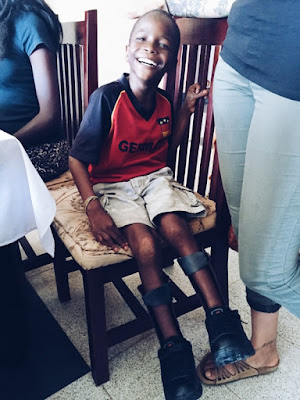 After lunch, we brought the team over to visit Sister Freda's Cottage Hospital. Sammy's younger sister had mentioned that morning over breakfast, how excited she was to finally meet Freda. She said, she'd heard about her for years and even did a report on her for school (for which she received an A!) So, when Freda walked out and introduced herself to Toni, I knew I had to capture the moment. Look at her excited face! 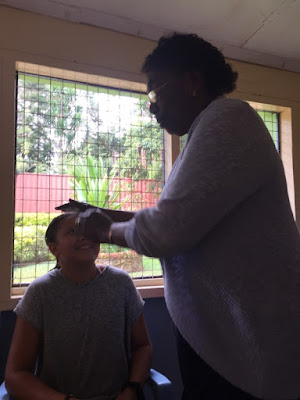 We toured the grounds, which include a farm, a nursery school, a small orphanage, a girl's secondary school and a nursing school. It's quite the place. I have been visiting the farm for years and even toured with her late husband in 2009...one of my favorite memories. So, now I had a hard time paying close attention to every second of the tour. (Case in point, this photo here.) 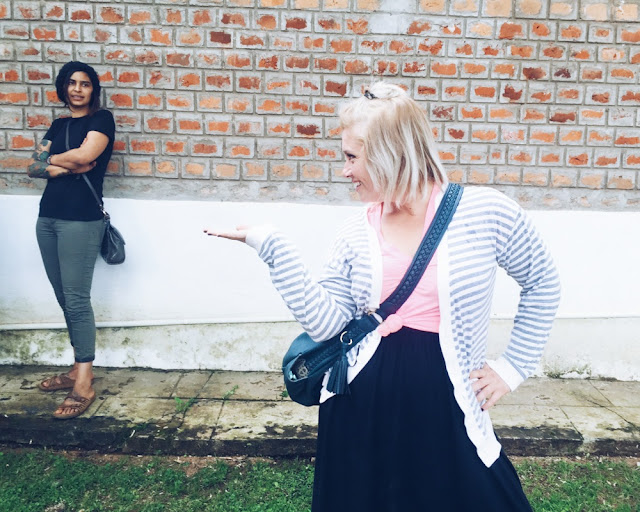 A few of the nursing students came out to say hello to the team, just as the storm clouds settled in. I love this photo because it shows the changing sky, but also because it looks like the girls on the left are doing some sort of choreographed dance, though I think I just caught them in a moment of laughter and they all happened to respond similarly. 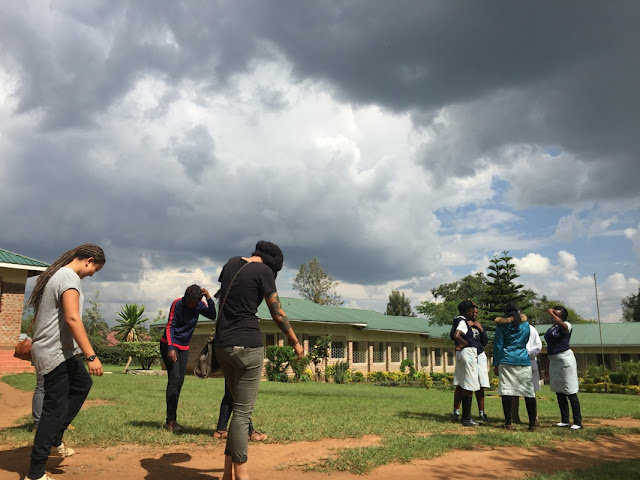 The team followed Freda down to the secondary school dormitories where she woke them up from a nap (sorry girls!) to greet us. As they walked in to the corridor, it began to pour rain. I mean POUR. So we all stood in the hallway introducing ourselves, singing and dancing. The acoustics were great and the rain on the tin roof made the whole experience that much more exciting.

My friend Kamari was part of Steve's team. She's been part of recording sessions for television and movies for years, so Steve tried his hardest to get her to sing everywhere we went. On this afternoon, she led the girls in a chorus of Jesus Loves Me...which was such a beautiful moment for both our team and those school girls. I, of course, broke the moment by singing Britney Spears, but then brought it back around with a verse, chorus (and RAP) from Crystal Lewis' "I Now Live." (rap at 2:20ish) 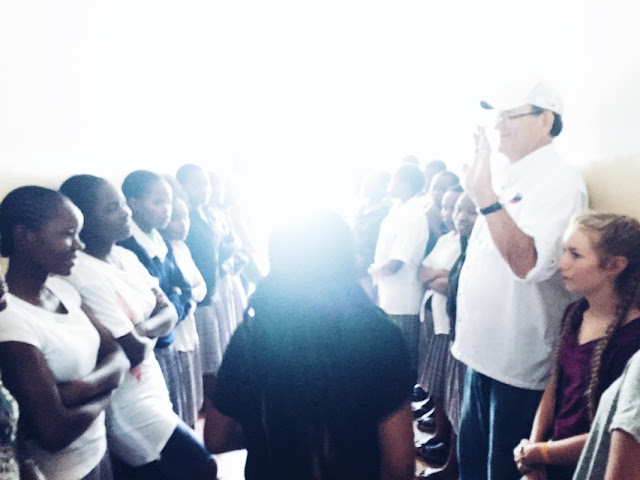 When the rain settled, we packed up and dropped the team at their house and went back to the kids house where Kevin helped Allan take his first few steps on flat feet in his brand new shoes. I poked my head around the corner to watch and Allan immediately asked me to get the camera and take a picture of this moment. He's a really sweet, and determined, kid. 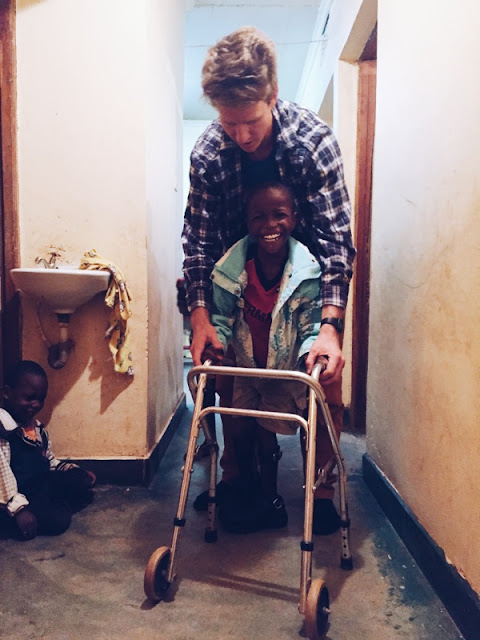 From there, we went home and several team members fell asleep around 8pm. Those of us who stayed awake--you guessed it--played Five Crowns before calling it an early night.
Posted by Allison at 2:41 AM

Allen is the smiley-ist kid I've ever seen!! So cute! Love to see Freda and her peeps! Love to see your smile too!
Thinking of you!
Love love love!
Mama