Well, on Friday morning we knew Steve and his team were coming to the center. We arrived an hour or so earlier to give the house moms some help preparing the place for visitors--and to test out the new "leash" backpack Sammy's mom had brought for Suzie. (She has a really hard time when there is too much excitement around her.) We strapped it to her back (it's shaped like a puppy backpack) and I held the tail as she ran away. She instantly looked at me as if to say, "You've gotta be kidding me." and came back over, grabbed the tail from me and ran away again. All-in-all it was about a 45-second interaction and everyone on the compound got a kick out of it. We settled for piggy back rides, which also do well to keep her calm. 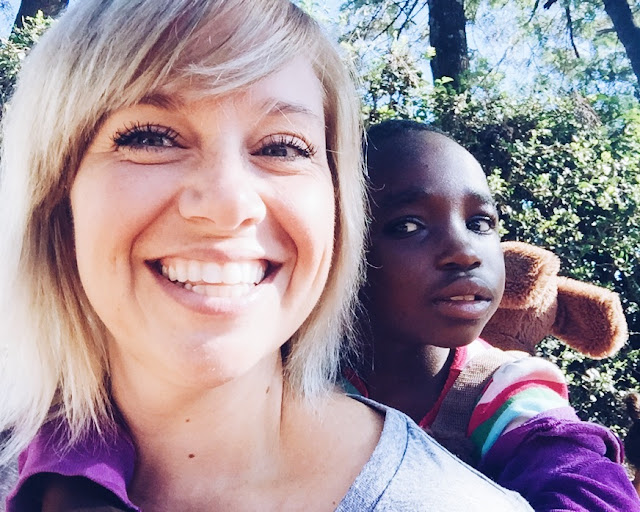 The house moms brought a big mat outside and we each grabbed one of kids with limited mobility and carried them out to enjoy the sunshine and fresh air. I picked up Dan and danced with him for a minute or so before laying him on the mat. He didn't seem to mind and even drooled all over my shoulder to show his appreciation. 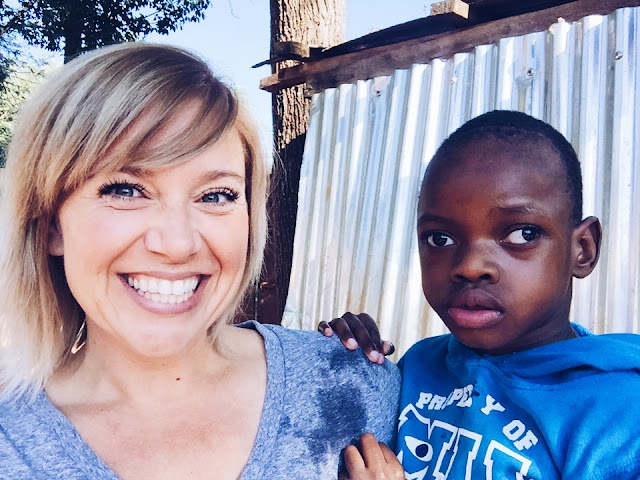 I plopped down next to the kids on the mat--in the shade--and was quickly swarmed by a few littles (Dinah, Moses, and Rael) and Suzie. We watched as Sarah, Linah, and Toni swung kids back and forth and others ran over to line-up for their turn. 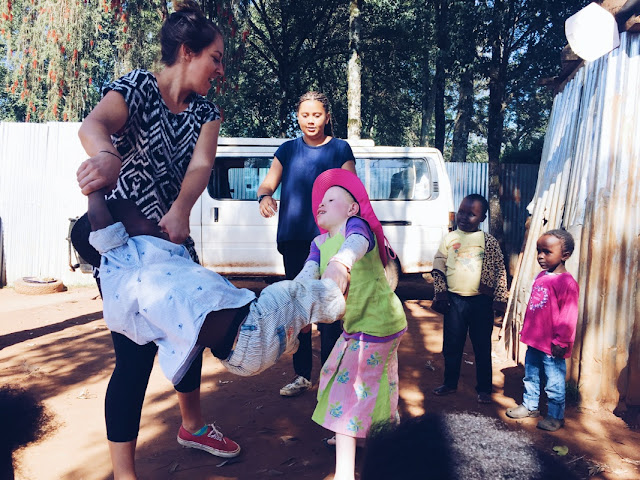 A few hours later, we got a call saying we should meet Steve's team at their house. When we arrived, the team was not quite ready to go, so we made up a game to pass the time. Here's the sister vs. sister tree climbing contest: 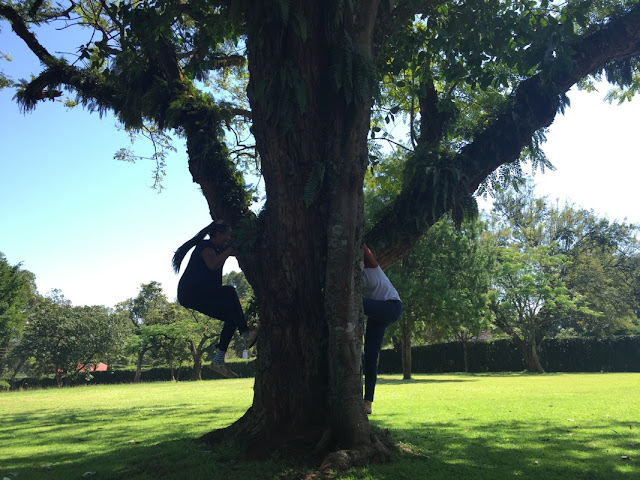 Sammy won, but Kevin would not let her hold the climbing title alone. Not to be outdone, he climbed higher up the tree and then hung upside down from one of the branches. He was impressive, but Sammy was barefoot, so I'm pretty sure that gives her a few extra points. 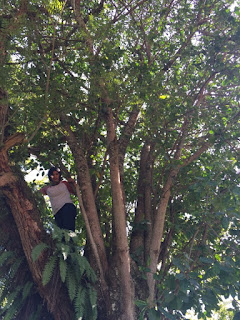 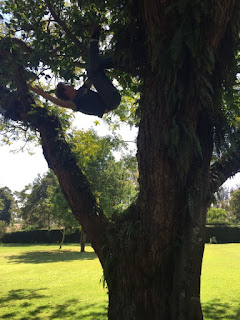 Two monkeys in the tree. 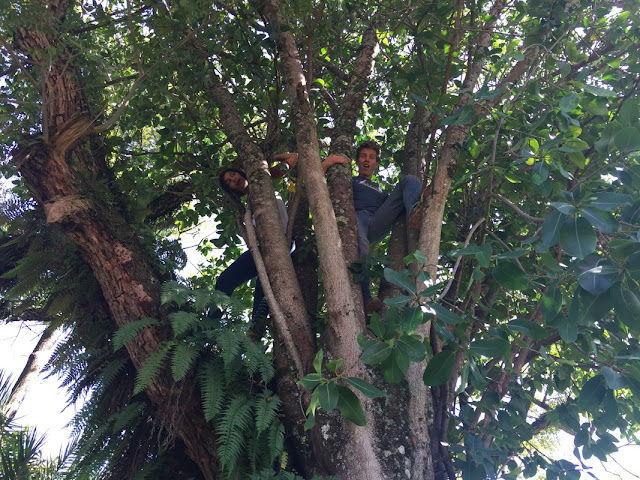 Finally, we loaded up both teams in to two vans and made it back to the kids center in time for lunch. Several of the guests grabbed bowls and fed kids while many of us just sat in the crowd and chatted while the kids ate. 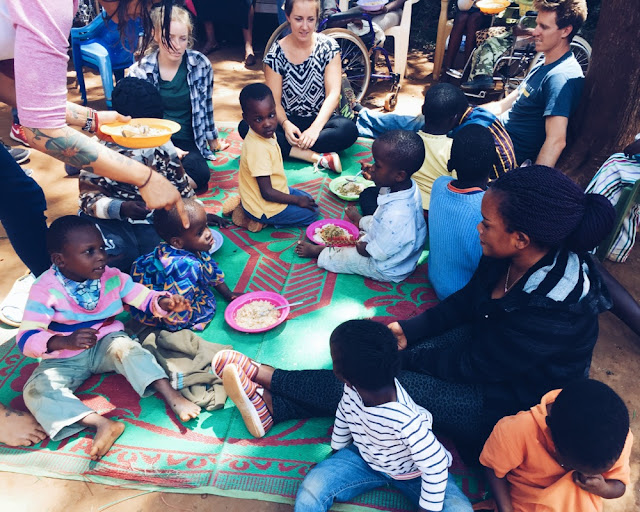 It was physical therapy day, so Whitney and her brother Junior had walked over with their other brother, Allan who sees the doctor at the center twice a week. While she waited, patiently, and watched, I painted her nails. We were instantly best friends...she was never more than two steps behind me for the rest of the day. 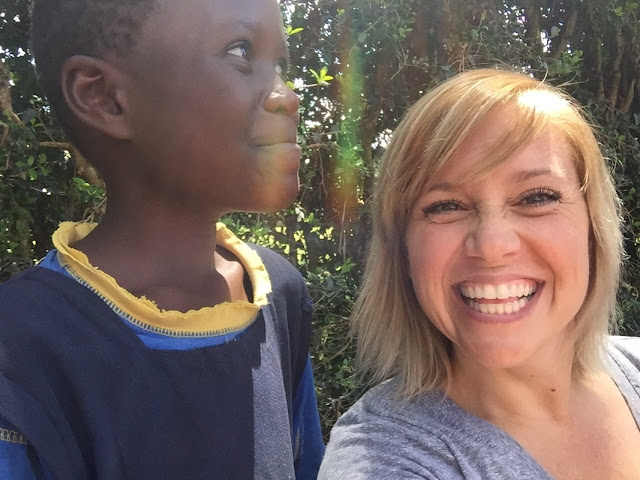 After lunch, I wanted to get a picture of the three of them to show you the strongest DNA I've ever seen. Honestly, all three look just like their mother. 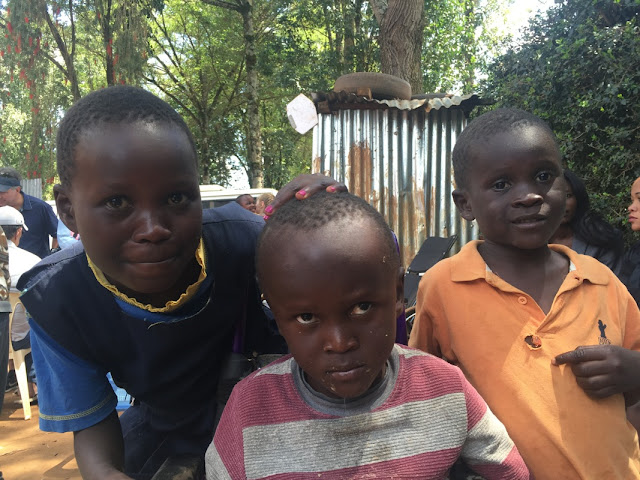 It's always fun to have Steve around...he appreciates my ridiculous sense of humor--well, he appreciates that I laugh at his dad jokes and we both like puns--and I just realized I've known his family for over 20 years. (That makes me feel really old.) 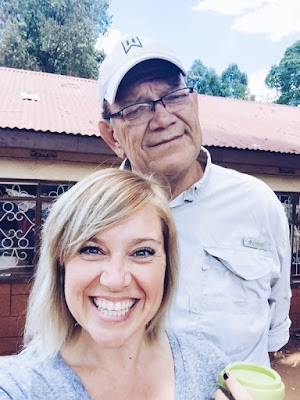 Kamari jumped right in. She was carrying kids around, dancing, passing around her sunglasses and taking pictures...the kids loved her. (And Sam loved the attention.) 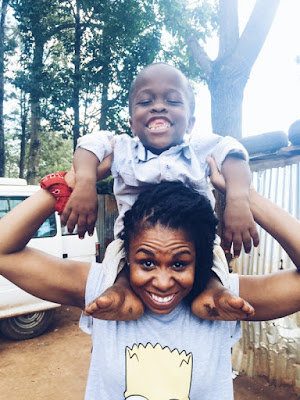 Toni was painting nails for a while. Mary was so excited to show me her new pretty pink "cutex." 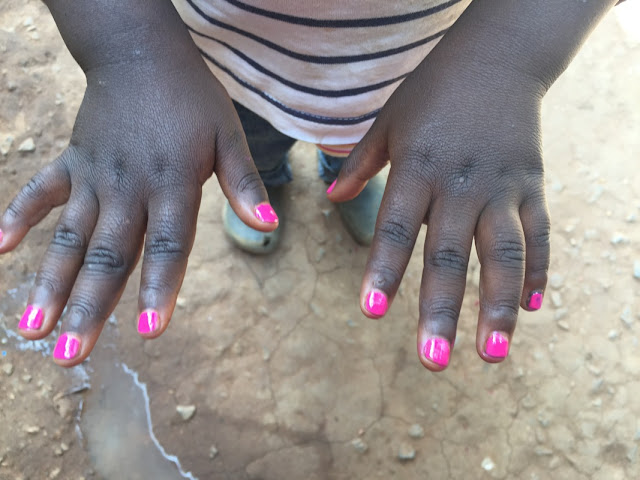 Lucy's family is one that we've all loved for years. Her three older sisters and one older brother were part of the Oasis of Hope house program and Lucy was taken to school by a sponsor from one of the college-age summer trips that came to Kitale in 2010, so everyone looks for Lucy and asks about her family while in town. 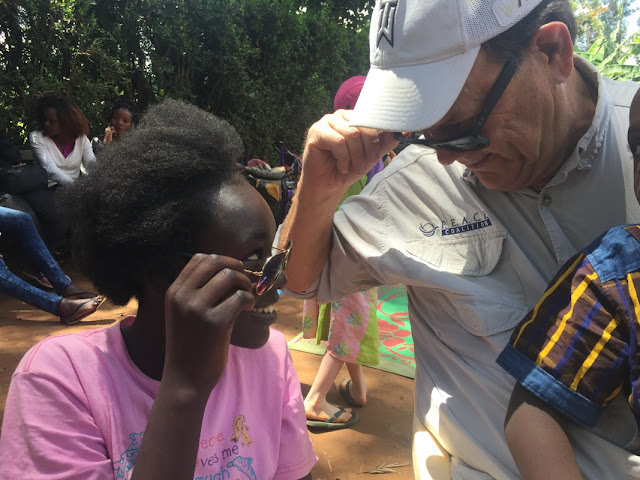 Linah has been so cute about asking for lipstick. And, with her skin tone, the shades I have in my purse seem to work well on her. I put some on and told her to show Steve. He caught my attention and asked me to surprise Linah by putting the same shade on him. She loved it. 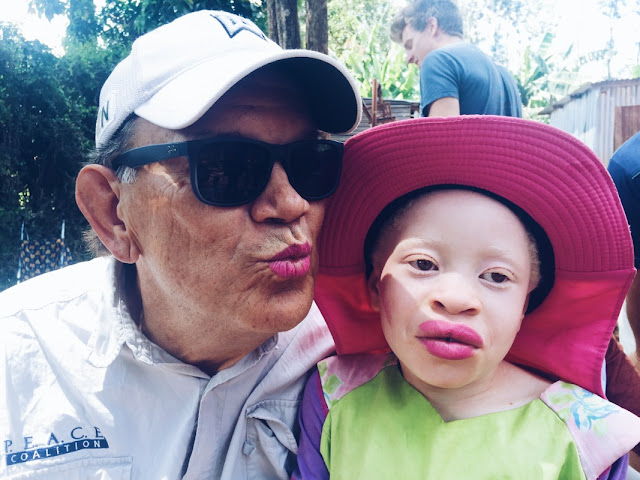 Hillary came out to give me something and I noticed that he had drawn tattoos up his arm to match Cynthia and Sammy. I called Cynthia over to take a side-by-side of the matching sleeve. 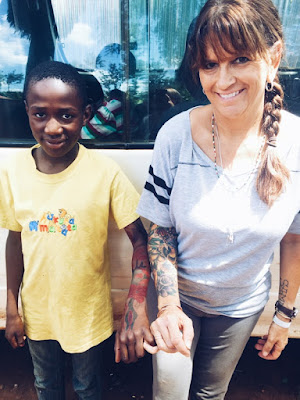 Linah has been growing out her hair so I can be put in braids, but it's not quite long enough yet. Caren was helping to give a bit of style in the meantime. And here's one more shot of Suzie and the backpack she hates so much. (This was just for a photo--we're not really making her wear it!) 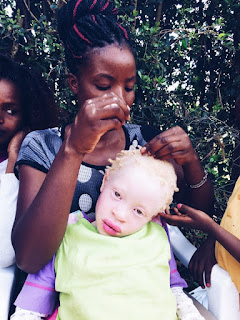 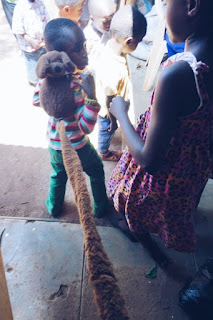 Steve pulled the team in to the house and asked Sammy to give a brief history of the center, share a few stories of how the kids came to live at the house, and then gave a chance for the team to ask questions. I always love to hear Sammy's heart for this place. She is soft-spoken when it comes to this side of things (not so much when she has to stand up for herself or for the rights of these children!) but her authenticity and humility shine through the details of the process of piecing together this wonderful family.

When she had finished, we packed in to two vans--just as the rain began--and headed toward Gilgal Secondary School. It was their last day of school before a month-long break and they were anxiously awaiting our arrival to begin their closing program. We arrived at the school just as the rains ended, the students had set-up rows of chairs on their basketball court and as we sat down, the sewing class presented a fashion show of the different items they had learned to stitch during this term. We also met "Ms. Tourism Trans-Nzoia" who was wearing the most beautiful green dress.

There is also a baby home on the Gilgal grounds, so a few of us had small children sitting on our laps. This is Joseph. He grabbed my glasses and did this pose all on his own. Someone behind us whispered, "swag!" 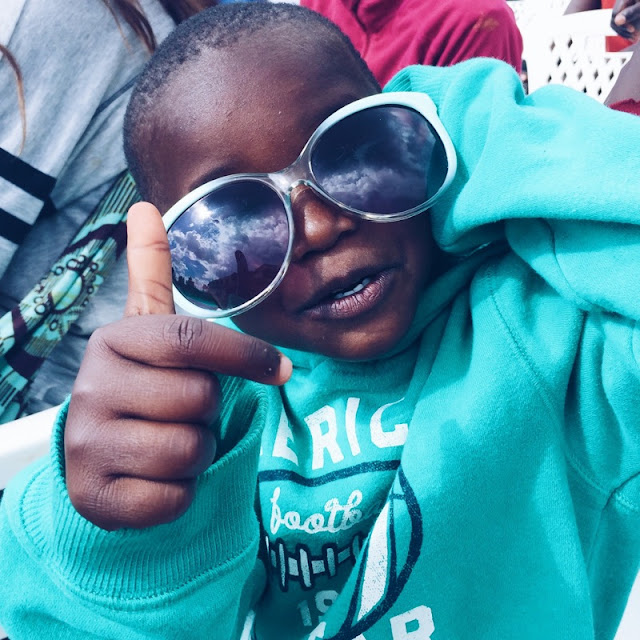 The rains returned about twenty minutes later and the ceremony was forced indoors to the church/multi-purpose room on site. Once I was seated, Joseph found me again. 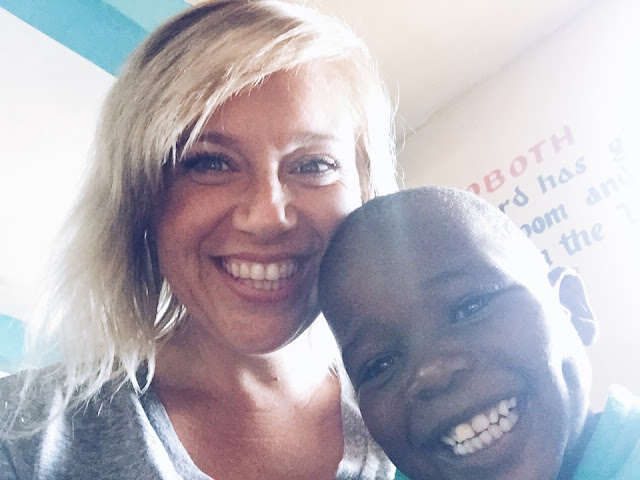 Sammy disappeared for a while when we arrived, but reappeared holding this little guy, Joel. Joel's mother had not wanted to keep him and tried to stuff him in a pit latrine, breaking both of his arms in the process. Fortunately, he survived, but has some developmental issues--he is almost three, but does not walk and can hardly crawl. Needless to say, he is Sammy's absolute favorite. The two were inseparable for the rest of the afternoon. 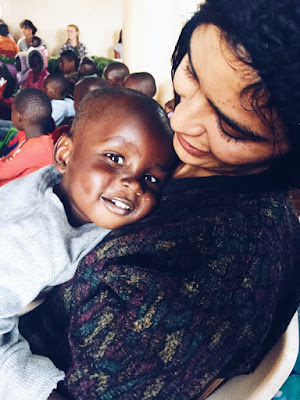 We left Gigal with one more stop to make before dinner: the new Precious Kids Center property! I have visited this site with a few teams now and it is such fun to watch them see the new land with the current house in the back of their mind. When they know the kids and see the limited space they are currently living in, they have so much more excitement and passion for the endless opportunities available in this new home. (Some of the adjacent land is still for sale, in case Sammy wants to expand someday.) 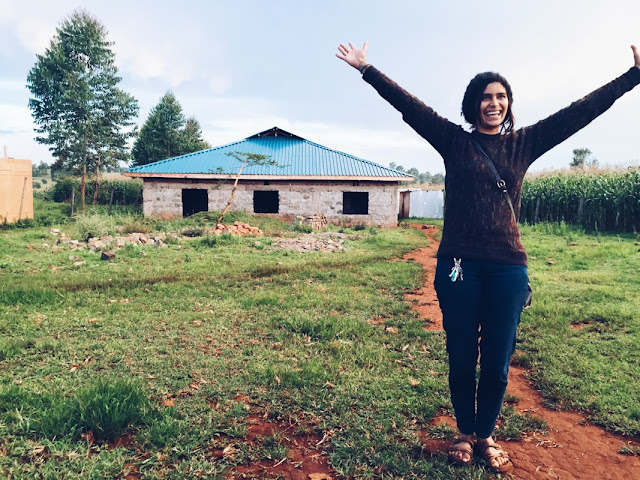 The team was exhausted, so we took them home for dinner. Sammy and I quickly changed out of filthy clothes from the day (her buddy Joel was really stinky by the time we left!) and went to join Steve and his team for dinner at the Kitale Club.

Here's me with Kamari and Hannah after dinner. I was wiiiiiiped out...I can't imagine how tired the team must have been! 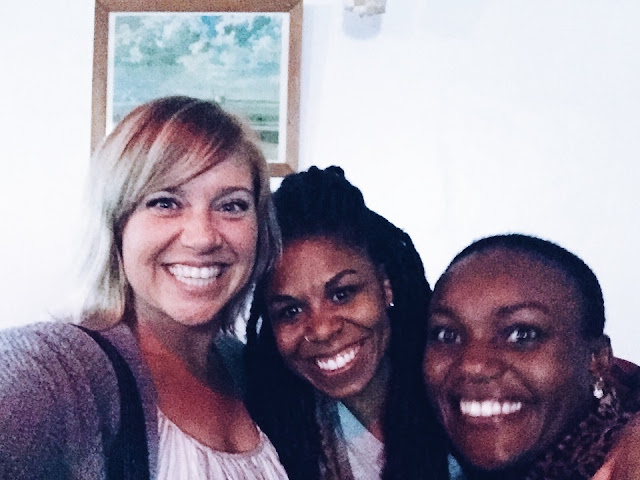 But. It didn't stop us from making a huge bowl of popcorn and trying our best to beat Jordan (which, yet again, proved to be impossible) at Five Crowns. 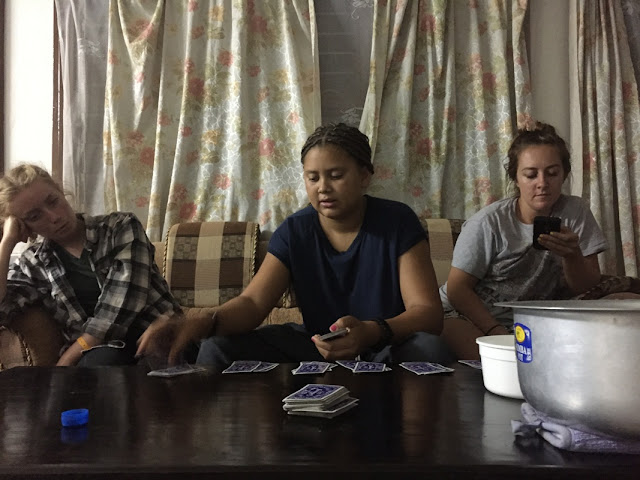