Sundays Are For Church Services And Family Dinners

Can you imagine anything better as the very first thing you see on a Sunday morning? This kid has no idea how much our van-full of adults loved this look. I wanted to call him Goose all day, but I didn't think he'd appreciate a Top Gun reference. 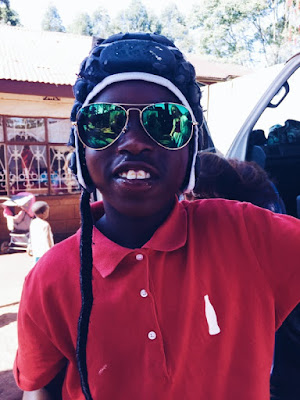 We would never let a large group of adults filling the van stop us from packing it to the brim with kids too. It was an "everyone hold a kid" type of Sunday morning. Here's Kevin with Julius and Sarah with Victor (and Frank in the background.) 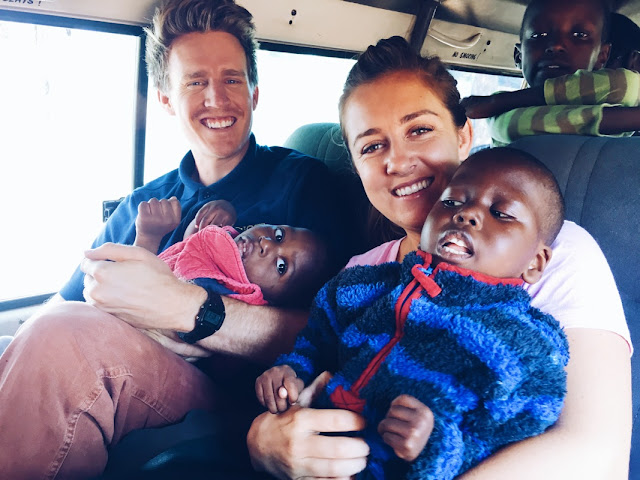 We were a steady stream of kids and Americans charging toward the empty rows at the front of the church, but when they sent all of the kids to Sunday School, the adults moved closer together. All the better to make jokes during service. I know I've mentioned that I have known Steve's family for 20 years, and that we have been coming on various teams to Kenya for 12 of those years, but when we made the exact same joke at the same time during church, we were both surprised. He told me I'm not allowed to sit by him in churches anymore, since I just distract him with jokes the whole time.

We typically wind-up sitting next to each other in services because he is teaching and I am singing and I need to follow his cues for the service. The first time we were in a Kenyan church together, in 2003, there was a demon-possessed guy in the service as well. Thankfully, today, there was not. 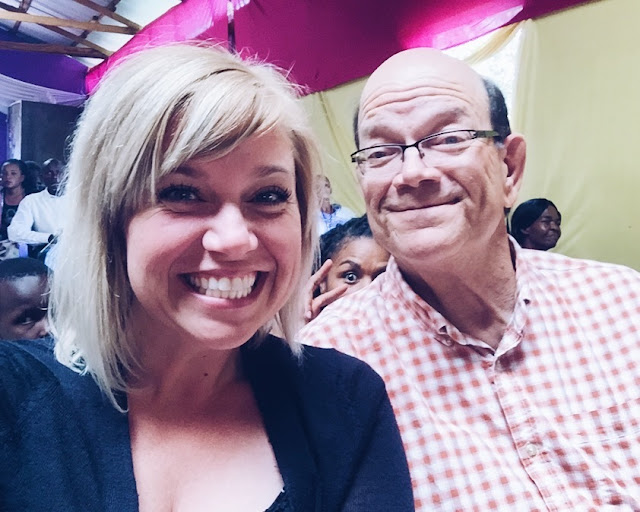 Two Sundays ago, Sammy's mom mentioned that I sing so the pastor said I should be prepared to sing this Sunday. When we arrived and she was out of town, I thought I was off the hook. They even began to talk about the offering, which is usually the last part of the service. But, as the woman invited people up to collect the offering, she said, "Also, Samantha's friend, you should be ready to sing for us." She read a Bible verse and then brought me to the front. I introduced myself and explained that, as we offered our money to God, we should also offer our hearts and lives. And then sang "All I Am" by Phil Wickham. 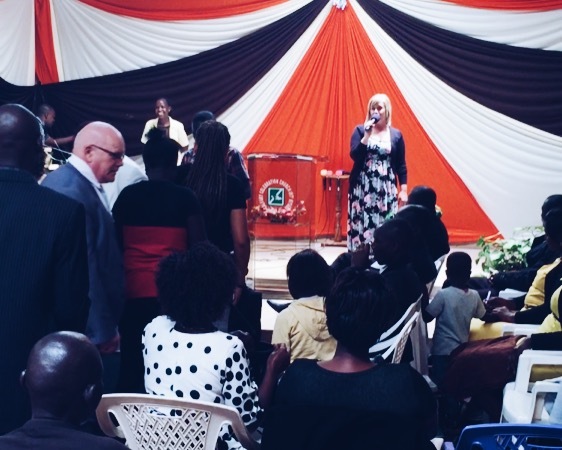 As soon as we arrive home after church, it is a frenzy of hunger. The kids jump out of the van and head straight out back to get a plate of food. And the adults follow. Really, it's nearly 1:30 at this point--it's lunchtime. This was the last day that Sammy's family and friends would be in town, so we crowded in really close to eat, laugh, and play together. 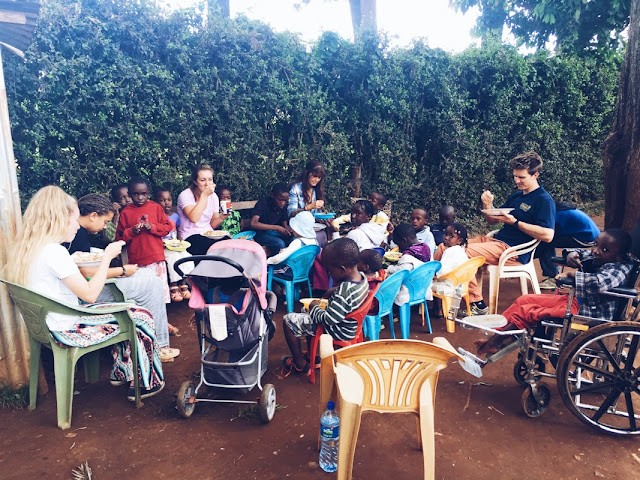 It was almost as though the littles understood what was happening, they all took turns sitting with their new friends. Here's Toni with Dinah and Kevin with Moses. (Moses loved Kevin.) 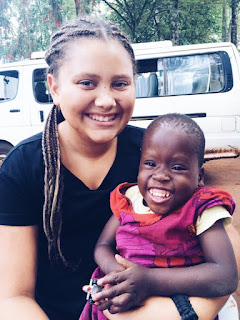 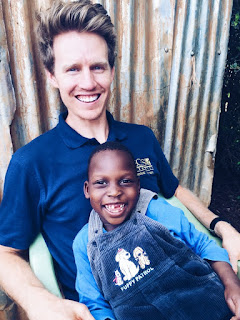 Eventually, Sammy announced that it was time for haircuts and one-by-one kids made their way to the backyard to take their turn with the shaver. Once the majority of the kids are back there, it's much more fun to sit back there with them...even if the wind blows the freshly cut hair all over your face. 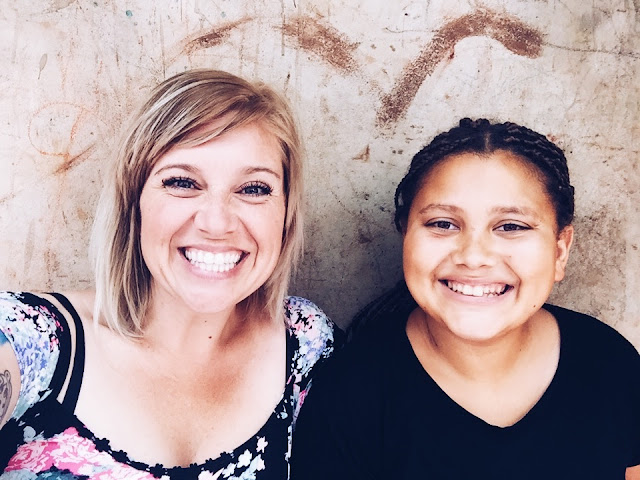 Moses waited his turn by sitting in my lap and drooling all over my arm. But he's really cute, so I didn't really mind. 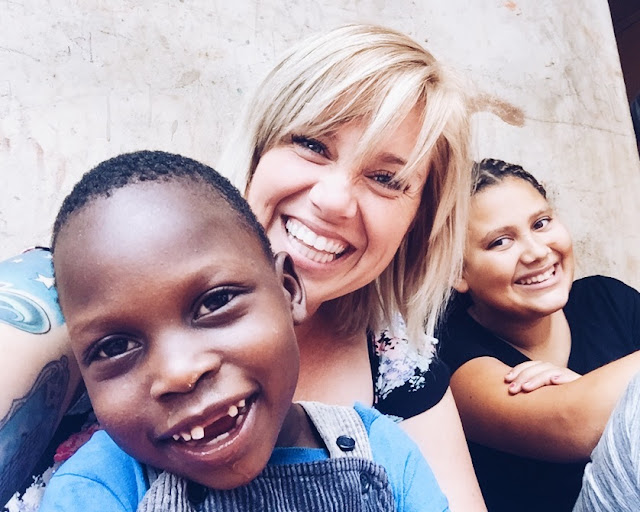 When haircuts were finished, wounds were cleaned, and instructions for the morning were given (the team was to leave, with Jabal, first thing in the morning) we went home. We were invited to dinner at Ben and Christine's house, so the team spent an hour or so napping, packing, and dyeing my hair.

Dinner at the Tanguli's was delicious, as always. Christine makes boiled potatoes and then fries them (I convinced Sammy to steal one in her jacket pocket and at it on the car ride home)...and she always makes a ton of chapati and and giant bowl of guacamole--it's more enough for 25 people, even if we're only a team of 10. They also have a small cat that runs around their house, it crawled up in my lap and fell asleep while we were all talking. I could have fallen asleep too, it was very cozy.

We were all so tired (and very full!) when we came home and we knew Monday would be an early morning, but we couldn't pass up the opportunity for one final game of Five Crowns. (Duh.)
Posted by Allison at 6:23 AM