My first full weekend here was a weekend filled with visits.

Saturday morning was Visiting Day for a few of the schools that the kids from Precious Kids Centre attend. So, bright and early Saturday morning, we headed to Greenfields School to meet the teachers, see report cards, and pick up the boarding school kids for a day off-campus. We loaded up Sammy's van and headed back to the house. {I wish I had thought to record the moment the van doors opened and the Centre kids welcomed home the boarders. It was so dang sweet. Lots of running to or from the van, embracing one another, jumping with excitement, calling out names to celebrate their homecoming...from the sweetest, most unexpected pairings. I'll try to remember to capture it next month.} 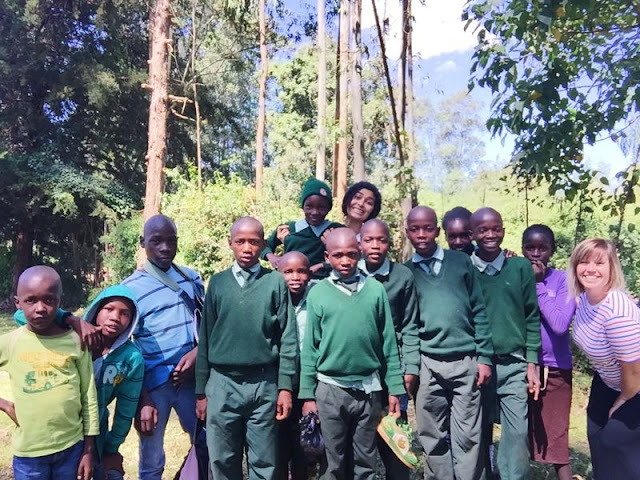 As the boarding school kids changed in to home clothes and played with their friends, Hellen stopped by to say hello. She had been at a meeting next door and had heard I was in town, so she came over to welcome me back. I told her I am looking forward to starting up the Bible study with her sister and their friends, and she nodded with excitement (well, she's very cool when it comes to emotion, so I actually received a slight head nod and eyebrow raise, but I'm taking that to mean she's really excited.) 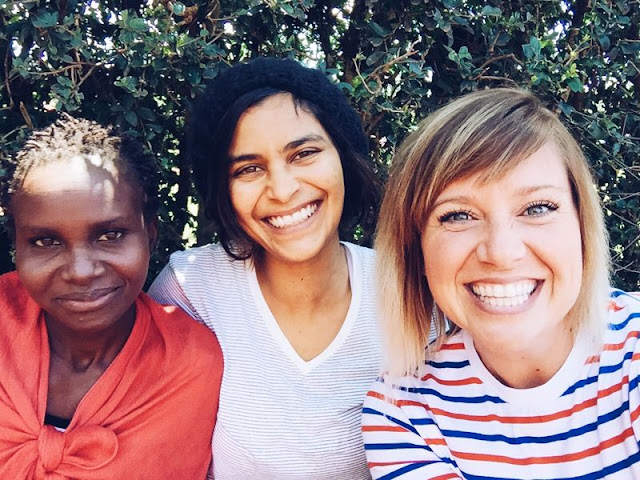 One of the last things the principal said to Sammy on our way out of Greenfields was, "Be sure to cut their hair before you bring them back!" So the razor was plugged in and a line was formed...one by one each child got a haircut from Sammy. The rest of us sat around and took photos to pass the time. 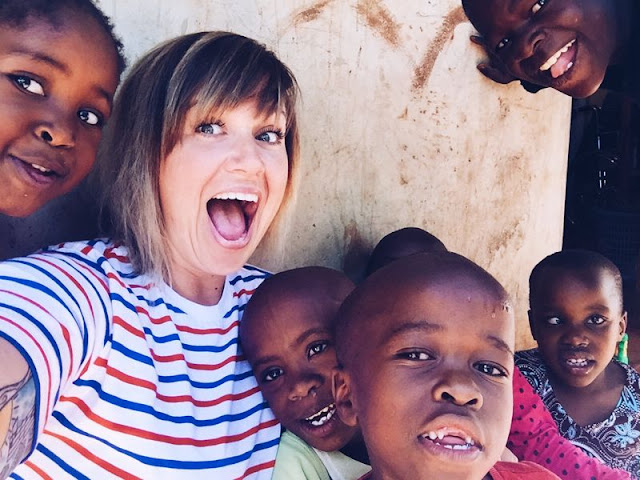 After haircuts, we went to town, where Sammy bought chicken and french fries (chips kuku) and boarding school supplies (which is more than pencils and paper around here: sugar, bar soap, bread, juice...) for each of them and they loaded up in the van and headed back to school.

Sunday morning, with a full van once more, we attended church. Watching a parade of 17 children wander in to church (typically a little late after wrangling and dressing and loading 17 kids) and find seats together (most often two to a seat) is really something. 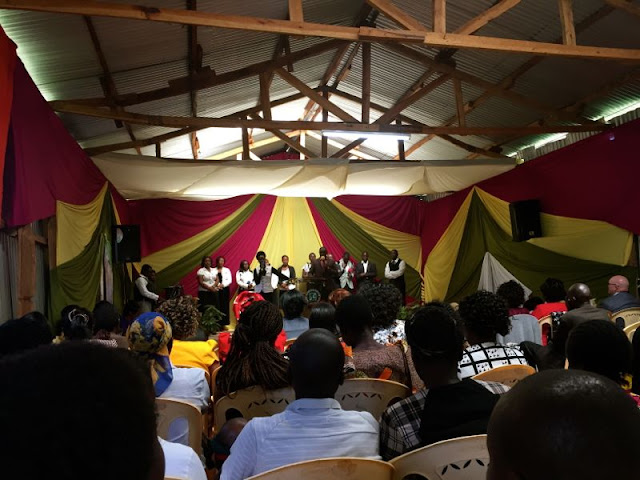 After church (and lunch at the Centre--and an incident with Willie in which I ended up with some sort of poop smeared around my wrist) Sammy and I walked to the van to head home for an afternoon nap. Suzie walked with us and stood at the car door with a "please take me with you" look in her eyes. (Since she does not speak, is often non-responsive, and nearly always running, jumping or "flitting"around--the house moms call her "butterfly"--she does not go to church with the crew. Being in the car is a big treat for her.)

Sammy looked at me and said, "Why not?!" And we drove back to our house with Suzie in-between us. We started the adventurous afternoon with a glass of water (this kid could sit and drink from a cup for an hour...she loves it) 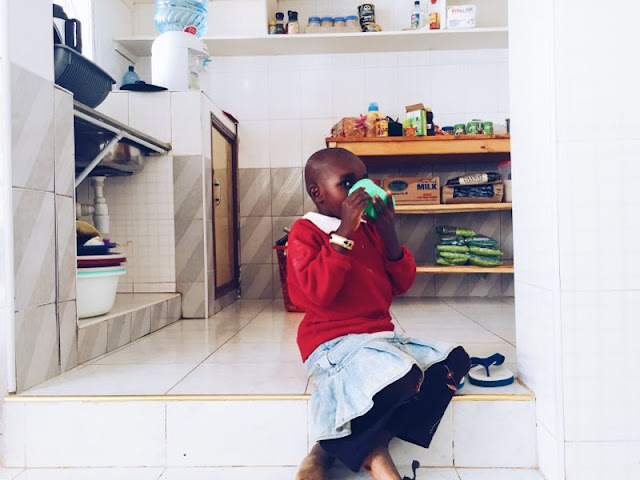 When she finished, Sammy loaded her up in to the hammock out back, which was like Christmas to Suzie. She twirled and rocked and giggled for nearly an hour. 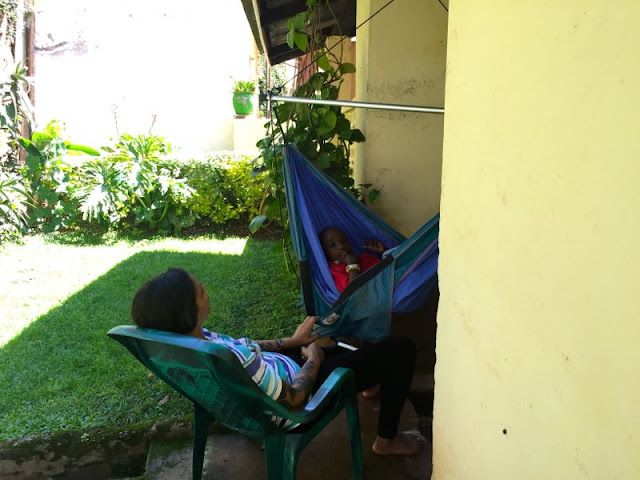 And then came Sammy's most brilliant moment of the day. I could see Suzie watching her own reflection in the microwave, and when I mentioned it to Sammy, she said, "Does she know there's a mirror in your room? She's gonna flip!"

Sure enough, this was the next hour of the day...with some marching and jazz hands as if putting on a show for Mirror Suzie. 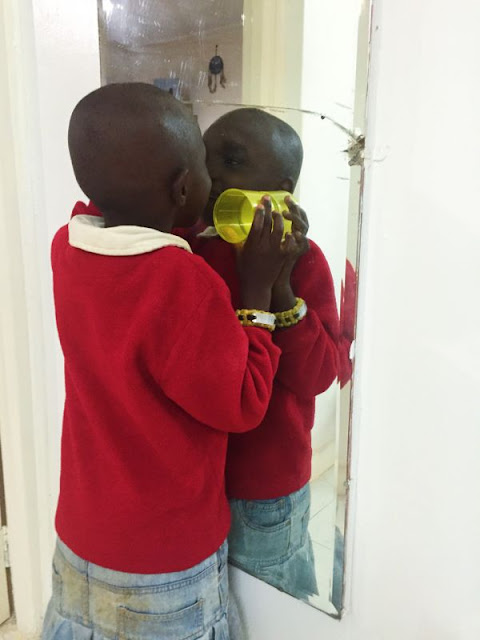 We wound down and prepared to head back to the kids house, but not before a few more pictures. 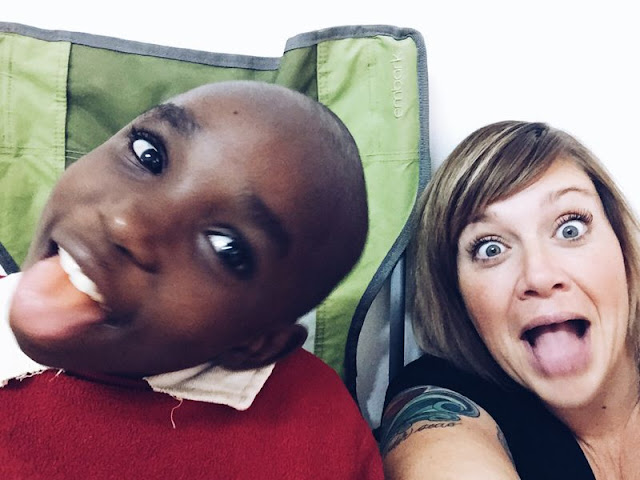 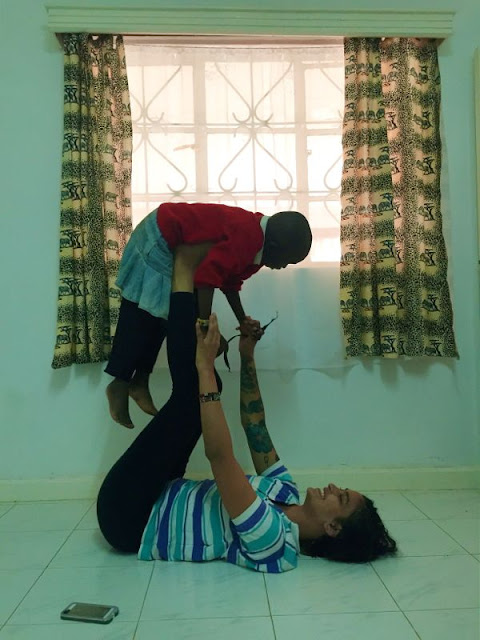 When we got back to the Centre, the kids asked to make more slow motion videos out front...I happily obliged, but that meant leaving Allan in the compound alone. (14 kids were already more than I felt capable to watch outside the gates.) He hollered for help and Sammy came to his rescue! They took a walk down the street, with Dinah in Allan's lap, and collected other friends along the way. 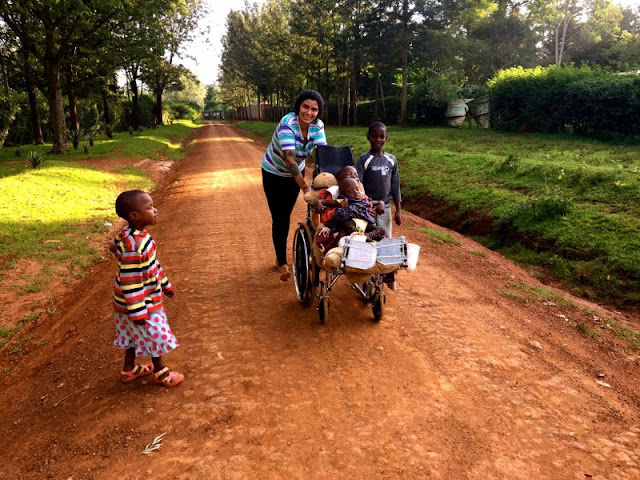 After the walk, everyone signed Allan's cast. Japheth's signature was my favorite. 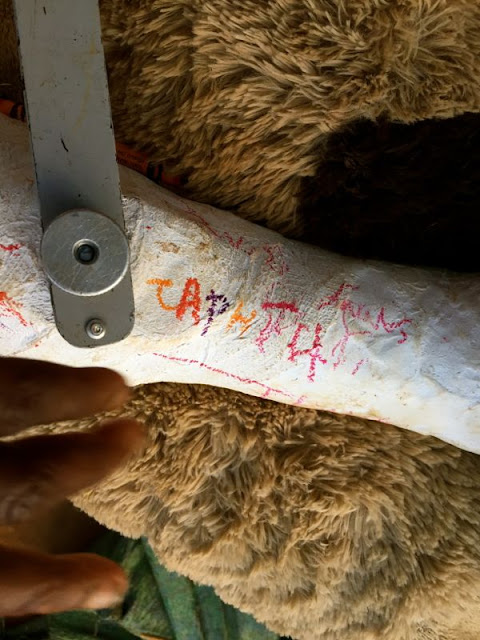 Just before dinner, Paul, an old Oasis Centre kid who is now thisclose to finishing secondary school came by to say hello. He told me that the four kids in Shimo Secondary are doing well and preparing to sit for their practice exams to get a feel for the national exams they will begin in September. I told him I'd take them for lunch in town when they're on break in August. Just then, everyone was called back inside to wash their hands for dinner. So Paul and I said goodbyes with a promise to connect again soon. 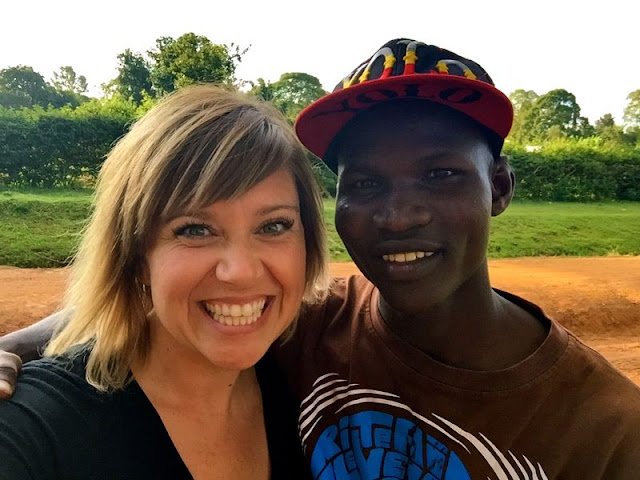 Sunday night dinners include chapati (which is sort of like pita/naan/tortilla)...it's a highlight for pretty much everyone.

Meal times around here work like this: the little ones are served first, then older kids and staff take bowls for those who can't feed themselves. When I was here in February, I always took Allan's plate. (Allan has cerebral palsy and, though he has use of his hands, they are shaky which makes it difficult for him to eat on his own...but the kid can eat, so feeding him means he can eat more food quicker!) When I arrived this week, Allan and I both knew that this would be the meal time routine again.

It's always felt strange to take a picture as Allan is eating, but this week, Ezekiel, who had been taking pictures with my phone, walked up as I sat down and said, "let me take your picture." I'm grateful that he captured a time in each day that has become so special to me. (Honest moment here: the days I'm crazy hungry--which has been on more than one occasion--I have to fight to remember that this is a moment I love. It typically only takes a few bites on Allan's part for it to click in my head, but sometimes taking a bowl of food to someone else while my stomach is growling is a struggle.) 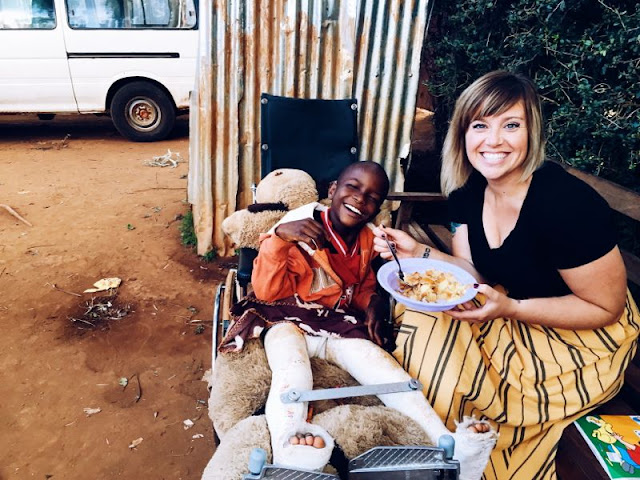 After dinner, we played a few rounds of hide-and-seek (which had some different rules than I'm used to which lead to my being "out" or being "it" for the first five rounds.) Finally Sammy caught on to the rules and explained them to me. Then there was some real competition in the yard...until I brought a group of kids in to the house and someone inside was stepped on and we made the switch to a less chaotic game.

Well, there you have it! Two days of non-stop action. As of tomorrow, I will have been here a full week...and, as of yesterday, I think I'm finally over my jet lag(!!!) I'm looking forward to setting some meetings in the next week or so to start the planning of the weekly Bible Study and set a date for the first women's conference. Please be praying that I will have a sense of the right people, not simply the most convenient, to invite to be part of this.

I could say 'more to come' at the end of every post, but you know that by now, right?
Posted by Allison at 10:25 PM

What a workout! Funny, I OFTEN wrangled kids to get dressed, find shoes, brush teeth and get to church--all my sisters...and then my own kids--all of my life. There is something very productive about it and I am sure your sense of accomplishment is way off the charts with 17...ESPECIALLY knowing that you are assisting them in becoming such great people.
I love you. So much.
Love all the photos and all the stories.

Love this! How all of this can fit into 7 days baffles me! and Suzie in the mirror... get the heck out of here! haha

So glad to see you have hit the ground running and are loving it!