Takin' It To The Chief

Tuesday morning, when Suzie fell asleep in my lap, I knew it was going to be a great day. She crawled up on my lap, snuggled in and started drooling. I have such fond memories of my mom rubbing my back when I was sick, or letting me cuddle up when I was sad. To give these moments to kids without parents, is so special. 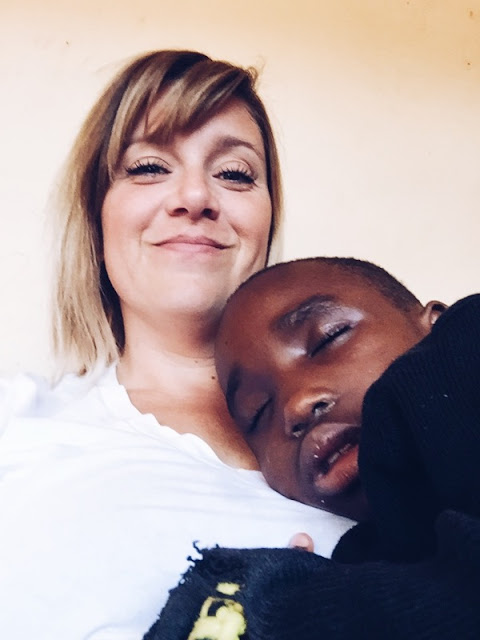 A little over an hour later, Sammy came in to ask if we'd like to go to the Chief's Office to get the proper paperwork for Victor's transfer to Precious Kids Center. Sarah and I jumped at the chance to watch this process.

We picked up Victor's mom, Phoebe, and then drove to the local Chief's Office.

Side note: Phoebe, Victor's mom, is a single mom who works full time to support her family. This often leaves Victor at home alone. The situation became even more complicated when Victor was diagnosed with a rare (and incredibly severe) form of epilepsy, but his mom could not afford the medicine to keep it under control. Victor is a healthy and happy child...Phoebe is a good mother in a tough situation.

On Monday afternoon, when Sammy went over to talk to Phoebe about bringing Victor to the Center, where he would receive round-the-clock care, proper nutrition, and the necessary medicine--and Sammy made it clear that she is more than welcome to visit Victor at any time--his mom was excited to help make Victor's transition as smooth as possible.

Alright, where were we? We picked up Phoebe and drove to the local Chief's Office. Here's the outside of the building: 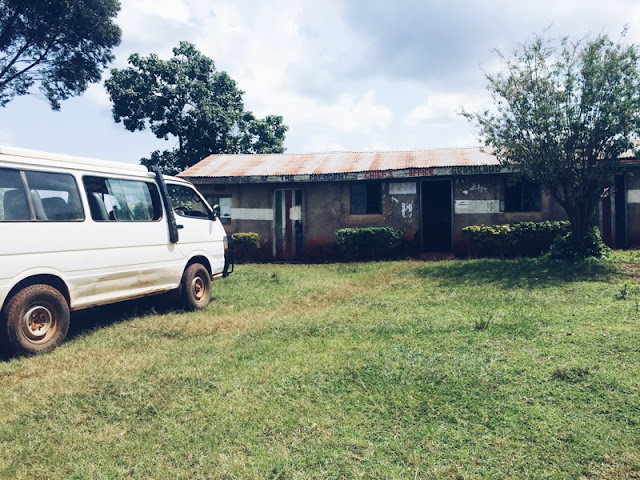 And here's what it looks like inside. (I took a sneaky shot so I wouldn't make Sammy look unprofessional.) 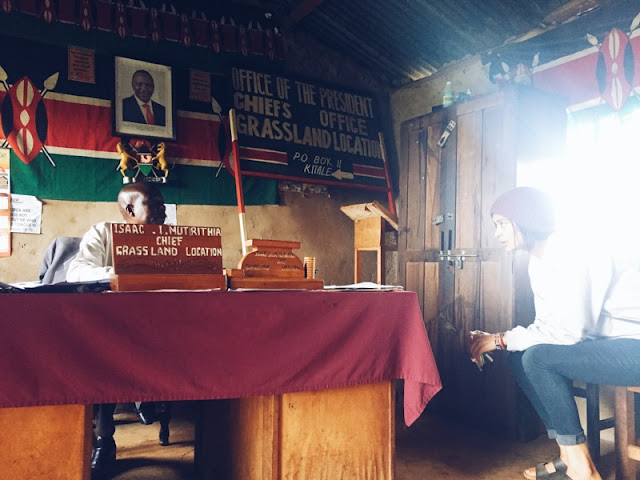 The Chief writes a letter saying the mother has given permission for Sammy to take care of the child, so that, in case of emergency, no parent could come back and say Sammy kidnapped the child.

To celebrate the occasion, here is a photo of Sammy, Victor and Victor's mom: 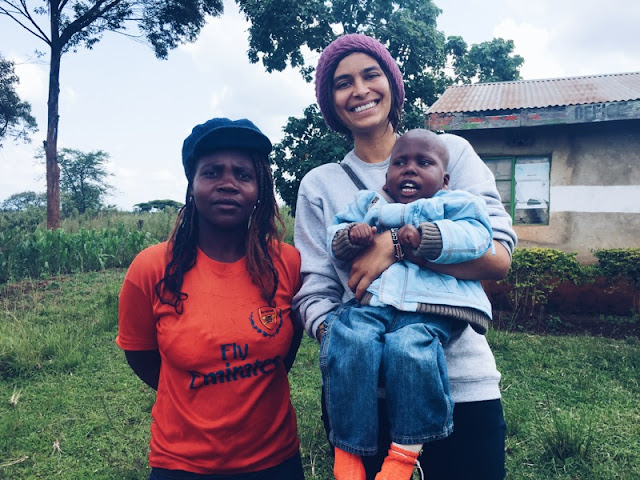 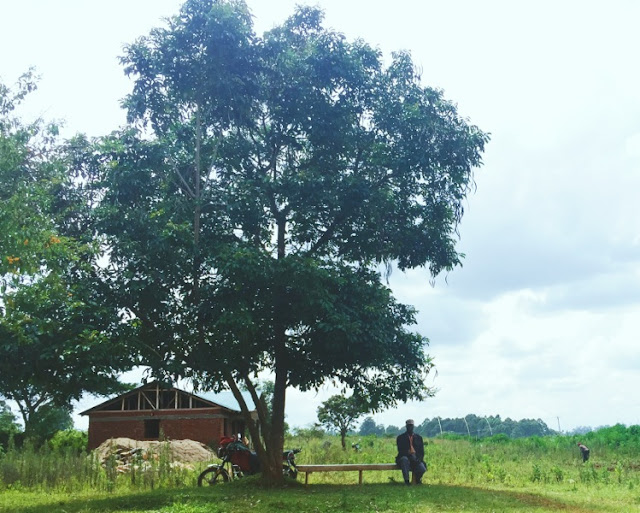 With Victor's mom on her way back home, and Victor's papers in-hand, we went back to the center for lunch.

Check out Moses' killer outfit: overalls AND a stripey shirt? Also, that shirt had buttons along the shoulder. Really doing it Mose. 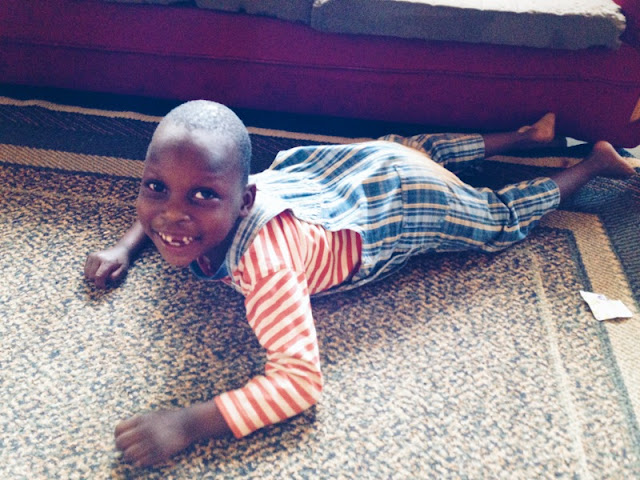 Maureen brought me a bead to put back on the end of her braid. Honestly, one of the more difficult things I've done since being here...but I finally got it! 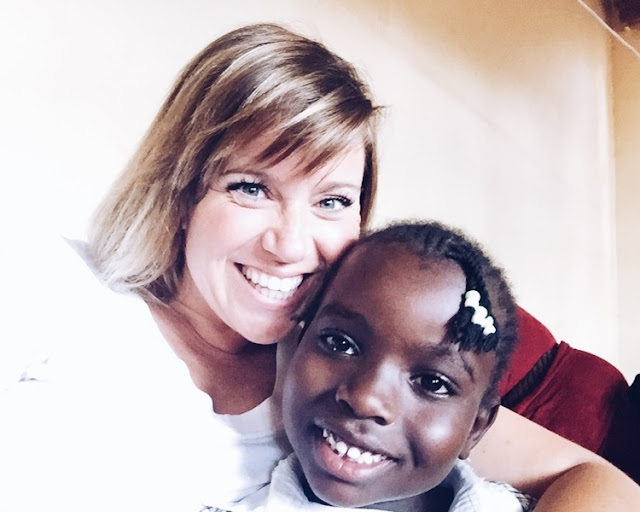 After lunch, my taxi driving friend Dan picked us up and drove us out to visit a new church (and future children's home) in Kipsongo (the local slum). I have been looking for a church to partner with as I launch this women's ministry in hopes that I would not be the face or the sole support for that community, but instead be able to point them to a local church.

This church is beautiful and the property has so much potential for growth! 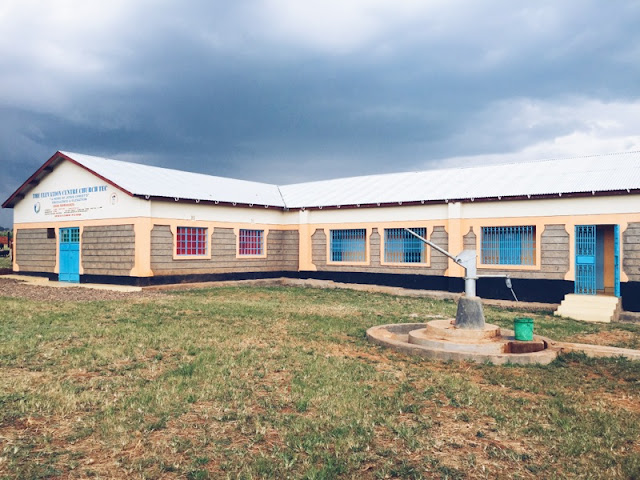 Pastor Enoch and his wife will live here with 25 children, who will move in once the building is complete (the bathroom, kitchen, and bunk beds still need to be built). He teaches each weekend and said to me, "I don't know if you've heard of Saddleback Church, but I like to teach messages from their pastor Rick Warren."

As he gave us a tour of the property, I asked a little about his life story. He told me that he grew up in Kitale and that he was a street kid. He ended up in prison, which is where he accepted Jesus and began his path toward becoming a pastor. He has a huge heart for kids who are living in the slums, whose stories could look very much like his own. He really is in the perfect role for his gifts and heart. I am really looking forward to watching this church, home, and community develop. 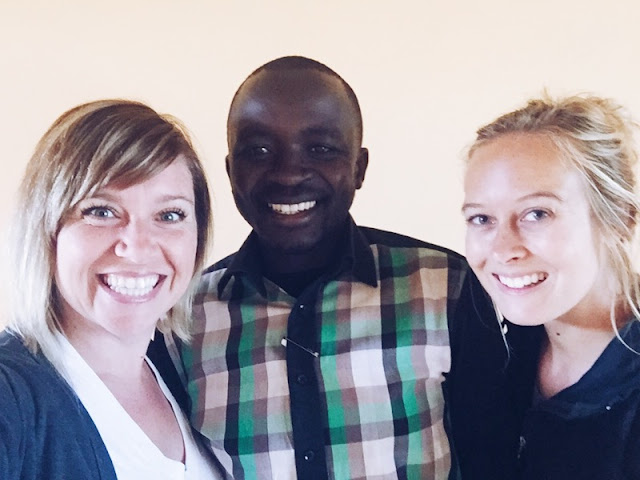 While we were visiting the church, there was a huge rainstorm. I love the sound of rain on a tin roof, but it makes it nearly impossible to carry on a conversation. Our taxi returned and brought us home, where we changed in to dry clothes and made a delicious dinner which we ate while blogging and watching Never Been Kissed.

See, I told you that a day that begins with a napping Suzie is destined to be a really good day!

P.S. Obama arrives tomorrow. Should be wonderfully chaotic around here. More on that soon!
Posted by Allison at 12:13 PM

LOVE LOVE LOVE...
I LOVED holding you and comforting you all through your life...SO happy for these children who get to be loved by you! And so happy that this warms your heart.
Sorry I never could teach you how to French braid...
Can't wait to hear about Obama!