The Week Between Northern Ireland and Northern Kenya

I meant to post this last week, before Lodwar and Kakuma, but didn't get around to finishing it...so, jump back in time and pretend it's the week I landed in Kenya.

We spent a few days in Nairobi, which meant I was able to find a time to meet with Alan in-between his work and our team schedule. Alan was part of the first student team I led with Mariners--20 students: 10 from Mariners and 10 from Mavuno Church in Nairobi. He met me for dinner at the hotel restaurant and we caught up on his life in the last five years since I'd seen him. Just in time for him to make his first trip to California next month. (How funny to go five years without seeing each other and then be able to leave dinner with "see you in a few weeks!") 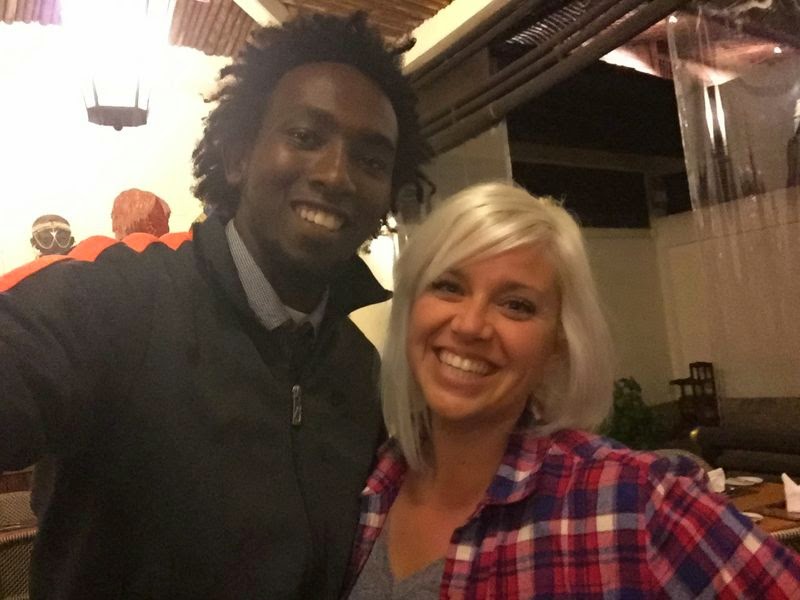 The team was scheduled to leave Nairobi at 5am, so wake-up calls were at 4. As we waited for all of the bags to be loaded, I took the photo I'd been waiting three days to take. (I couldn't bring myself to jump on this lion's back in the middle of the day, in front of all of the fancy guests of the hotel. But the hotel staff didn't seem to mind at all!) 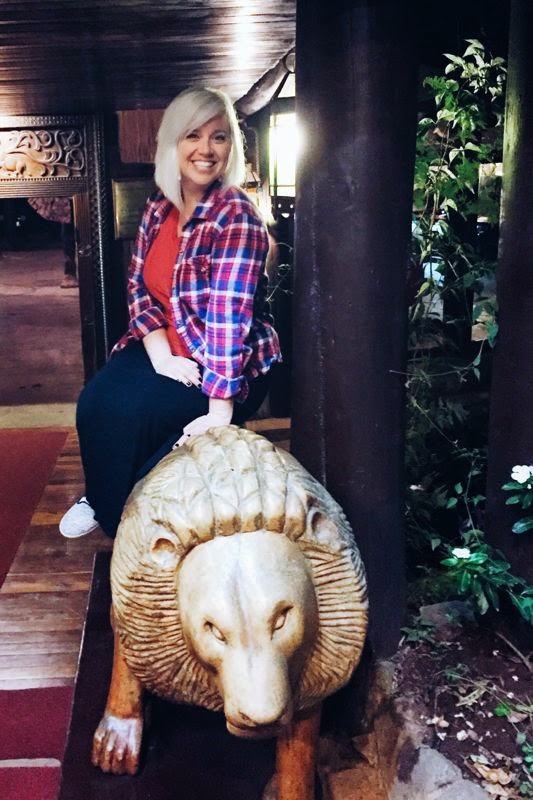 Our van driver overslept, so we sent the team ahead and waited for him to arrive. At 9:30am, we realized that, if we drove, we wouldn't make it to Kitale until after dinner. So we opted to send the bags ahead in our van and hop a flight to a neighboring town and take a taxi to Kitale. All-in-all, we still didn't arrive until nearly 7pm, but at least it was only 2 hours in a van instead of 11. 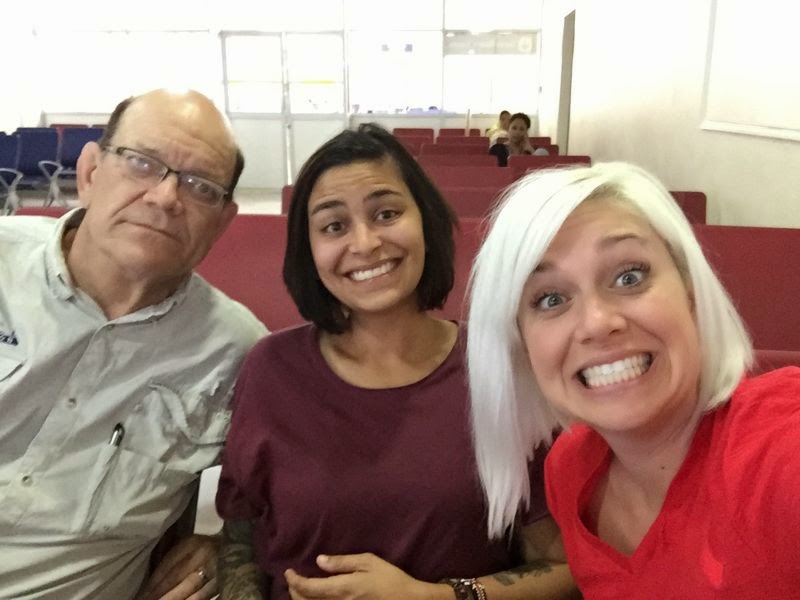 {Steve, Sammy and I waiting in the Nairobi domestic flight area} 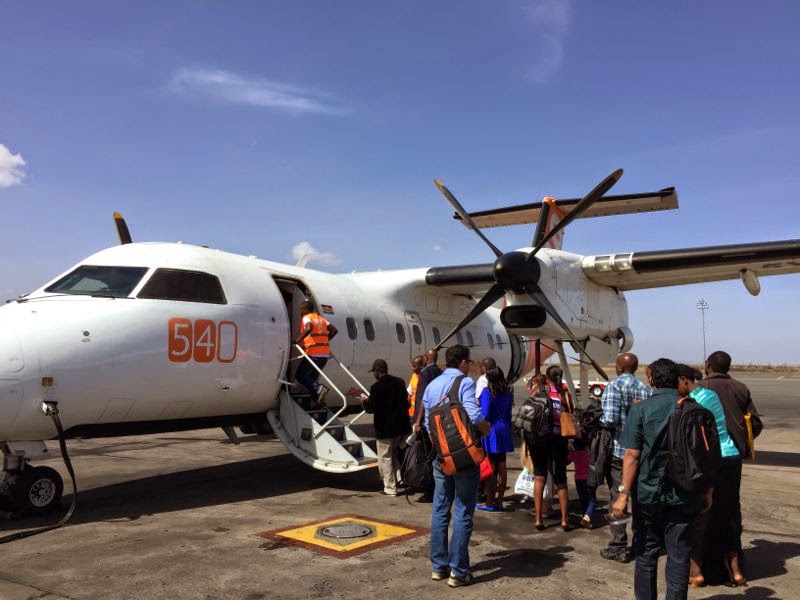 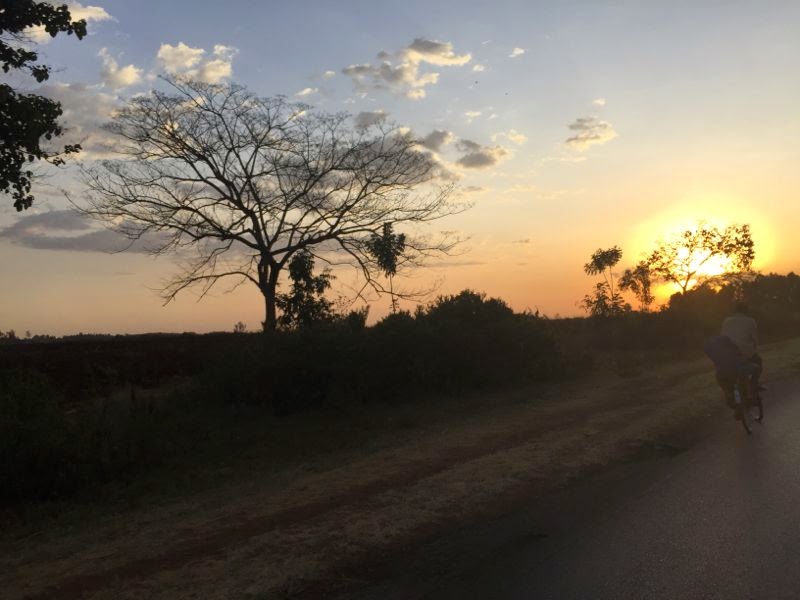 Steve and I dropped Sammy in town so she could go to see her kids--more on that soon--and then were driven to Sister Freda's Cottage Hospital. There is also a girl's secondary school on the property and when we arrived, they began to shout "Steve! Steve!" while singing and forming a conga line. Isn't that how your high school greeted someone from another country? Sister Freda is one of the greatest humans on the planet. And this is not an overstatement. Years ago, she began a hospital for those who could not afford to be treated in the district hospital. As time went on, the property has expanded to include a nursing school, a feeding program for local children, and a secondary school for girls. She and her late husband, Richard, were two of my dearest friends while we lived here. Richard passed away a few years ago, and many of us who were unable to make it to Kenya for the funeral held our own memorial service for him in CA. That's how loved these two are.

Now, imagine having spent the entire day finding your way to your home...tired, hungry, a little grumpy...and then you hop out of the car, in silence, and run straight in to your great friend that you haven't seen in years...who has lost a spouse since you've seen them and you were unable to properly grieve alongside and support them during their time of loss. I could haven't hugged her for about half an hour, but there was a party waiting for us around the corner. 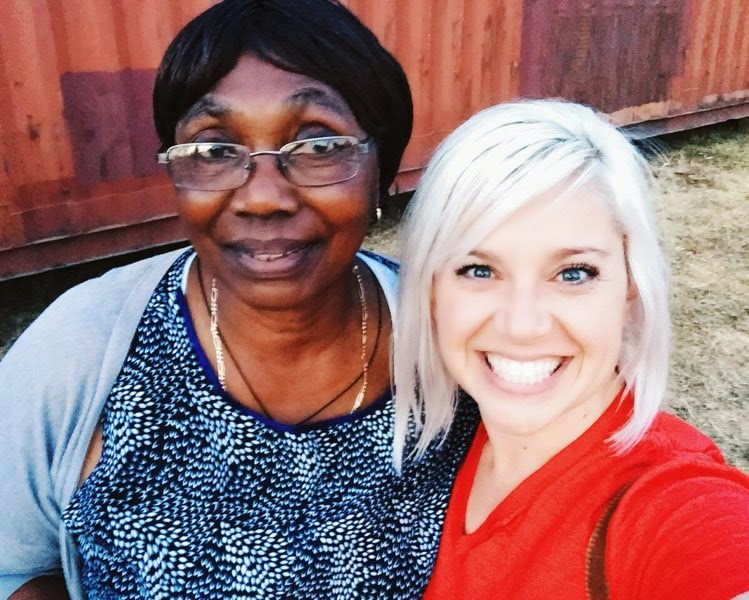 And Freda was only the beginning of the reunions! As I tried to take in the conga line and all of the feelings of being back in Kitale, I turned and saw Hannah and Lilac! Hannah is Rwandan and lived on the compound with me when I was here in 2008. I've known Lilac, through Steve, forever (or so it seems.) I was so excited to know that this was only the beginning of our three weeks together! 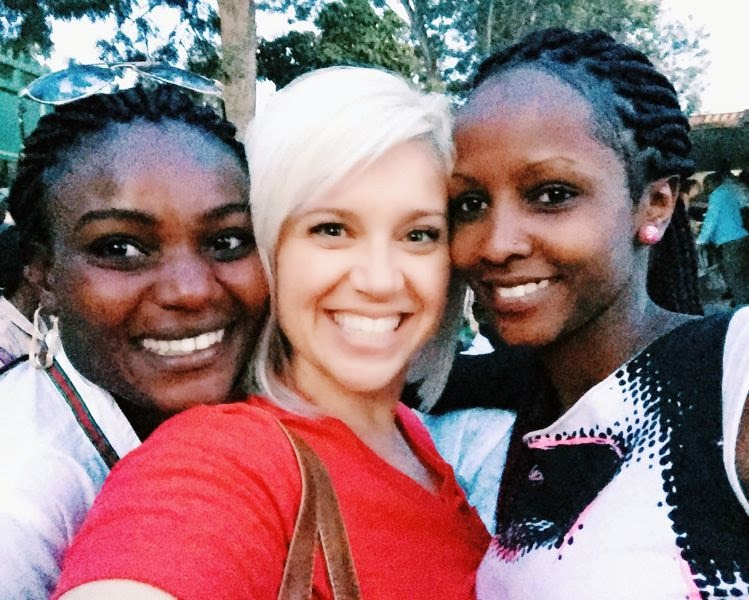 At dinner that night, I finally had to tell Stas that I thought he looks like a Ukrainian Joseph Gordon-Levitt. I said, "You look like a famous person." He said, "Yes. Justin Timberlake!" Even through the language gap, he's hilarious. This was definitely the start of a great friendship. 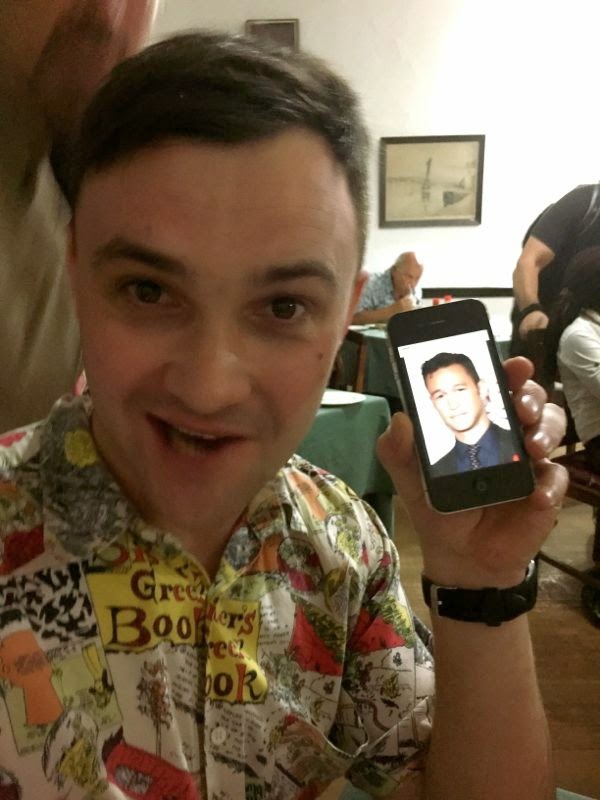 The Kitale Club holds so many memories for me. I stayed here on my first two trips. It's where we've eaten every meal with the teams over the years. We took abandoned children from Sister Freda's swimming here once a week while I lived here. Seeing this sign was part of sealing in my heart that I was home again. 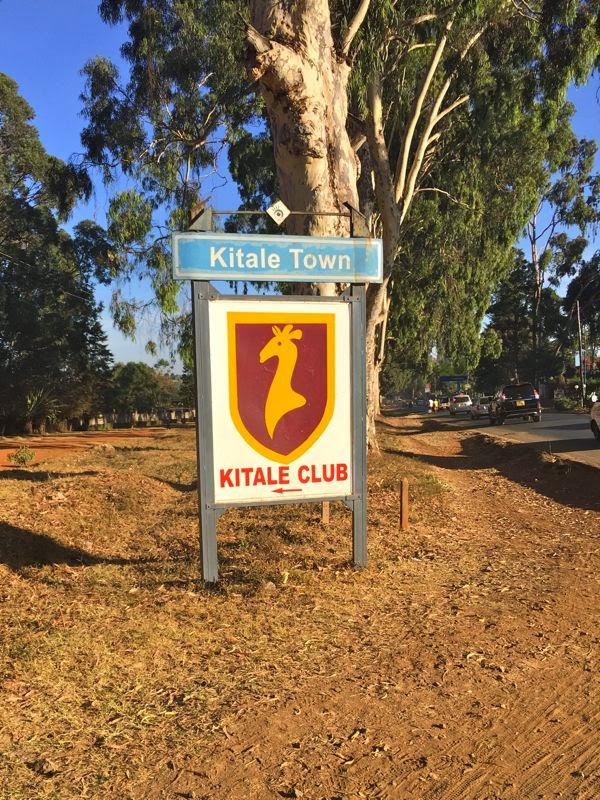 We took the team to Khetia's (a local grocery store) to buy snacks for our upcoming trips. 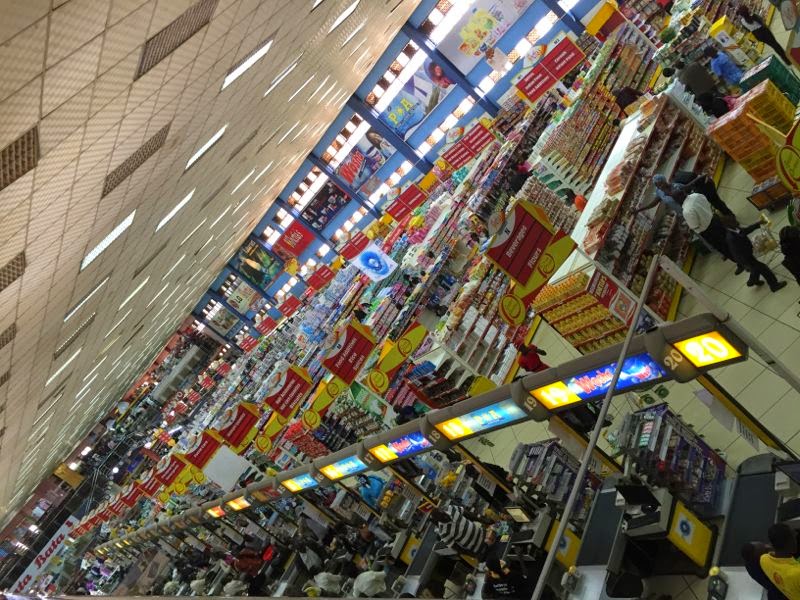 Over each meal, Steve would invite a few of the kids or local partners whose lives had been changed because someone had sponsored them, started a program that set them on a new path, or had seen a need and decided to start something to effect change.

This is Vlad, from Ukraine, talking to Francis, from Kitale, over lunch one day...each of them sharing stories of the way they've seen God work in their lives over the years. 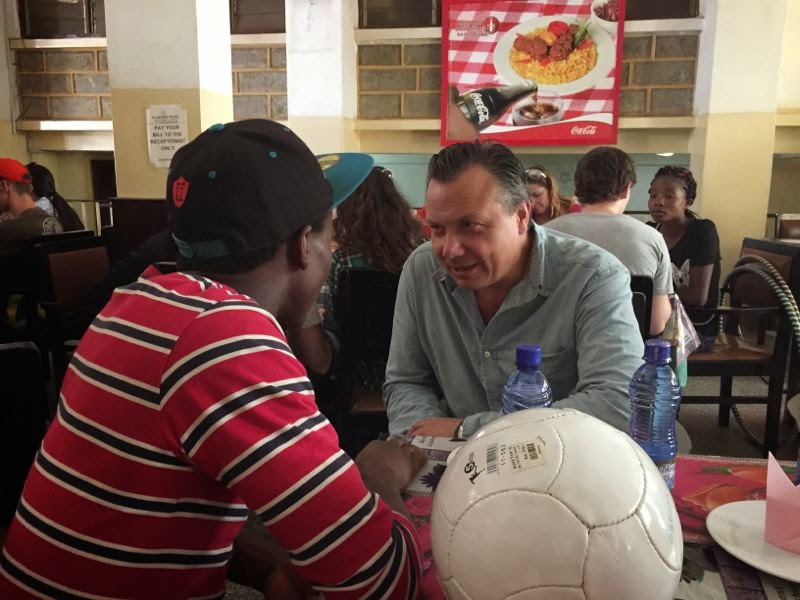 Stonic! Stonic owns a travel company and has been one of the drivers on nearly every trip I've taken. He's one of the very best. It had been too long since he and I were in Kitale at the same time! 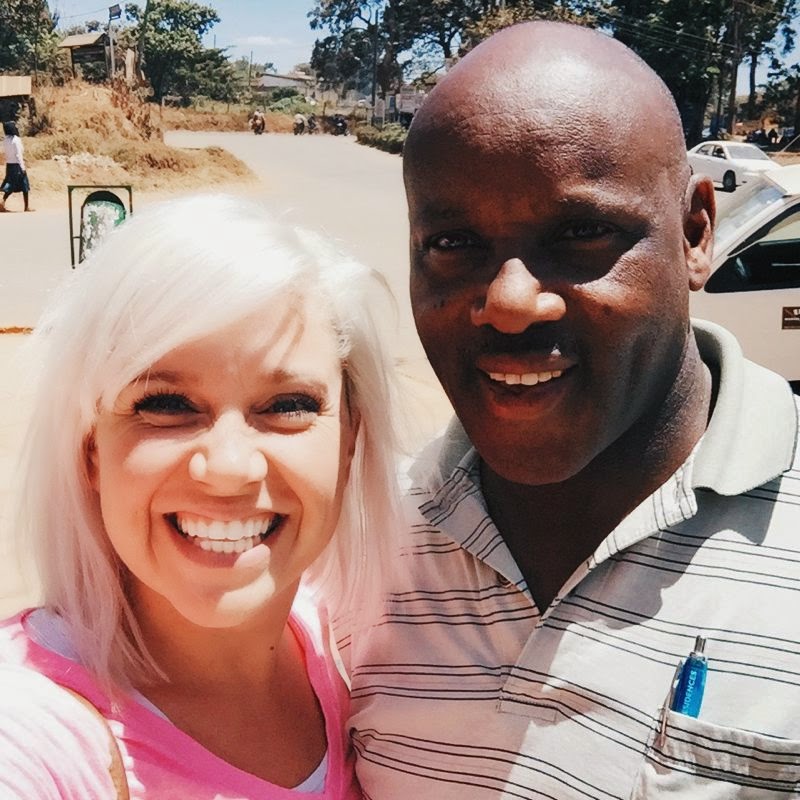 Then, one afternoon, we visited Gilgal Secondary School. Gilgal was started as a school for children from the Refugee Camp and, over the years, has become one of the top schools in the county. My friends and I have spent countless hours here--teaching classes, doing administrative work in the office, playing games during break, even taking trips down to the river to collect water at their old site. The founders, Ben and Christine, are old friends--they recently came to California and we spent the day eating In-n-Out and drinking milkshakes by the beach. 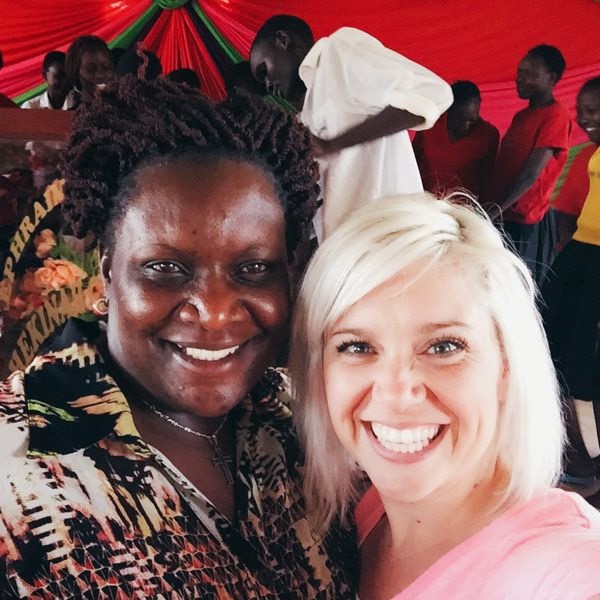 
Today, we sang songs (obviously...since that's the first thing we do at each new place) and then did a few competitions so we could give some sports equipment to the school. One piece was a handstand contest. 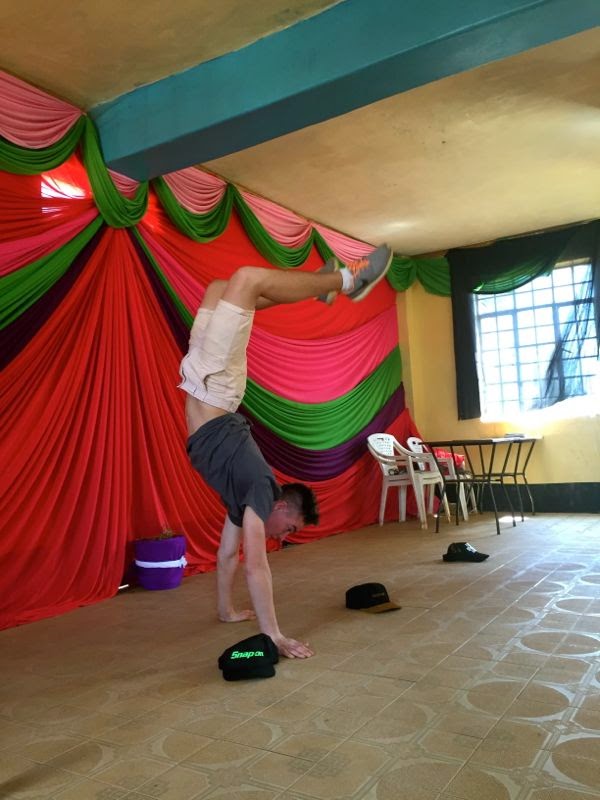 When it came time to say goodbye, these three girls who I'd spent most of my time with, came over to say goodbye. I'm hoping to see them again this week! 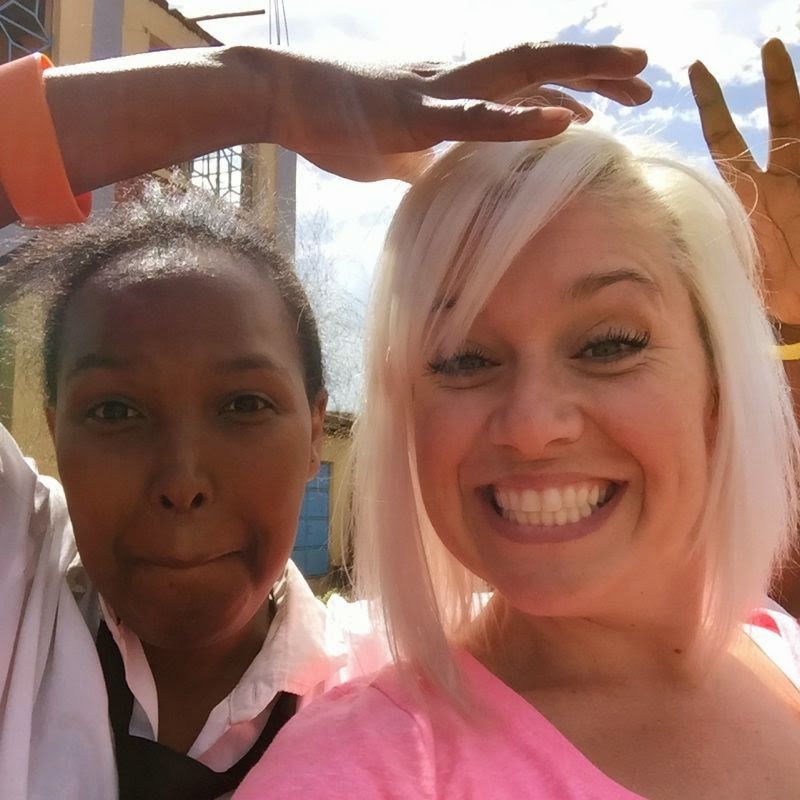 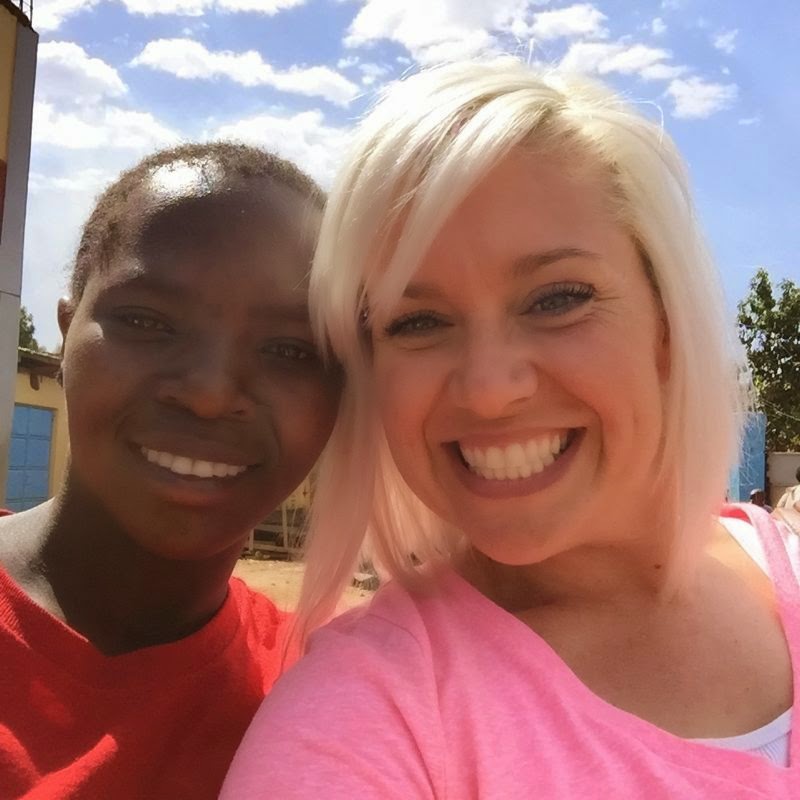 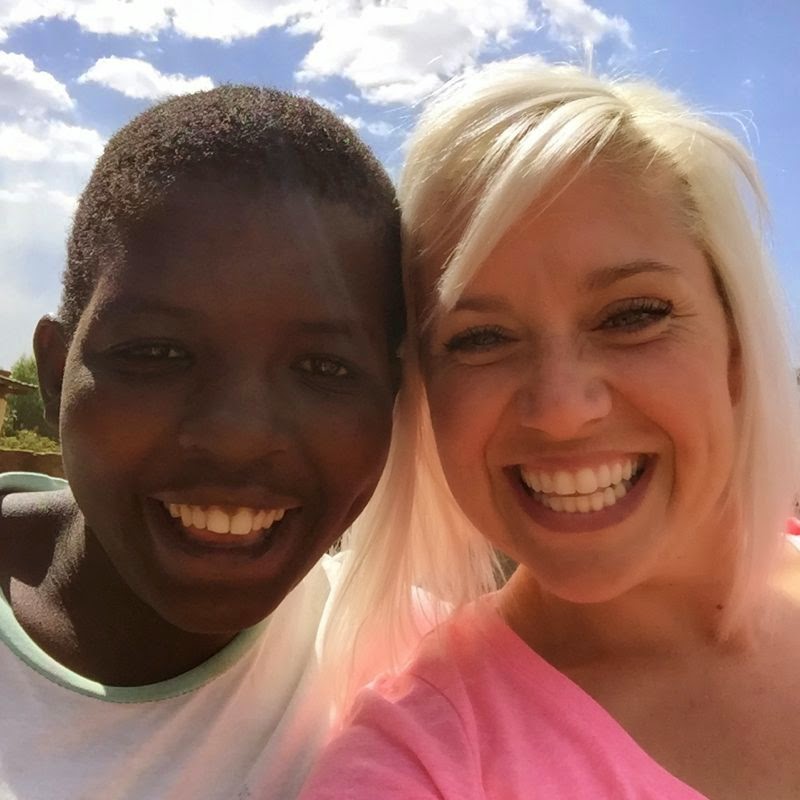 This is Sellah. Sellah used to be a caretaker at a home for children infected with or affected by HIV/AIDS. When I left in 2009, I'd heard she was very sick and I had feared that when I returned I would hear she'd passed. During my trips in 2010 and 2011, I was unable to find her. Imagine my surprise and excitement when I walked in to Gilgal last week and there she was! I ran right over and we hugged and clapped and, of course, took a photo. 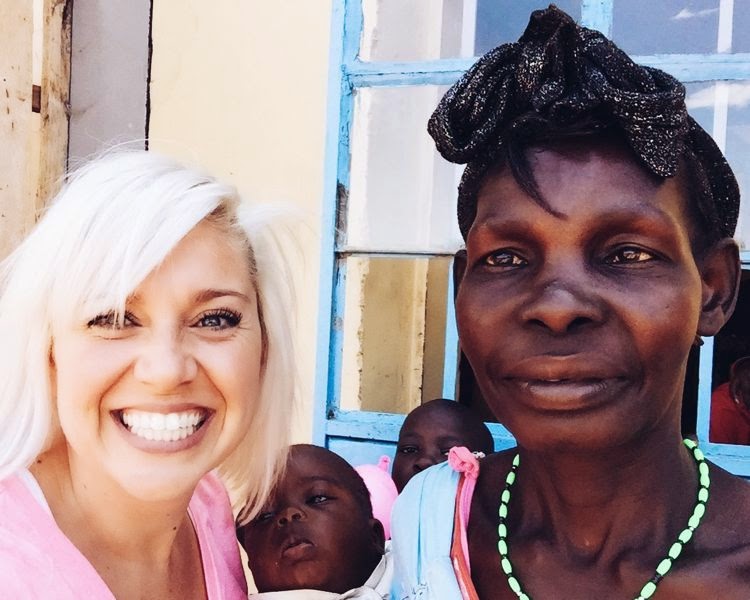 The next morning, the team went to Sammy's House. Sammy runs a home for children with disabilities. I've spent so much time there this week and have really fallen in love with these kids! So they will get their own post sometime in the next few days.

During school breaks, (the schools run year-round, so they have one-month breaks each quarter) a few kids who don't have safe homes to return to, stay with Sammy's kids. One of these is Lucy. Lucy is a classic Kitale girl...every team member who has come through the years has fallen in love with Lucy and her six brothers and sisters (Patrick, Christine, Ajix, Irene, Peter, and Erica...seriously, they are all so dang cute.) I was so excited to see her and I knew people back home would want to see how much she's grown too. She came right up and, hugged me. We held hands and sang songs together and then, listed people from home who have told me to say hello to her. (She has quite the fan club.) 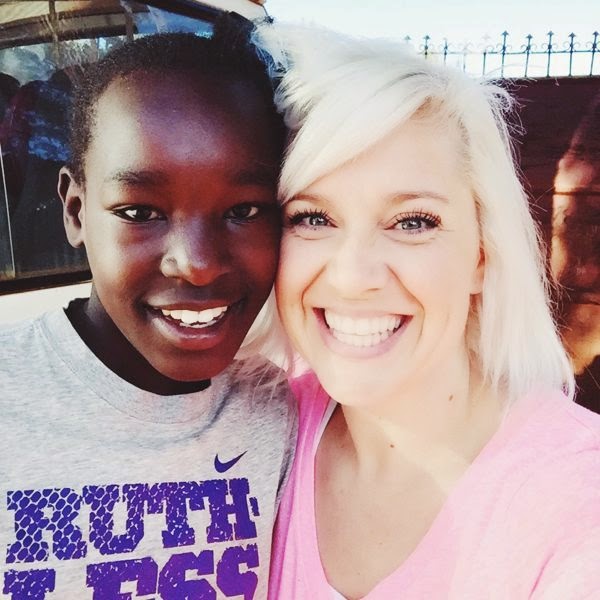 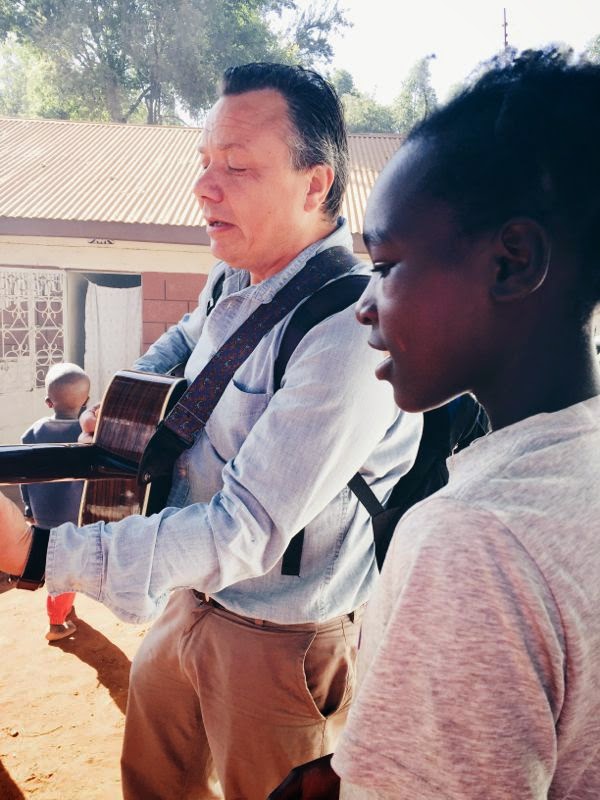 Leila and Juliette (Juju) are also two of the greats! They both lived on the compound at various times when teams came through--basically holding down the fort. Leila has a beautiful baby girl, Samantha, and was the master of details on this trip: making reservations, shopping runs for missing items, calling our ministry partners if we were running late or plans had changed. She's seriously so rad. Juju got married and had a baby since the last time I was here. We had so much catching up to do! She also now runs a clothing shop in town that I visited last week...I saw a really cute polka dot dress that I might pick-up before I head home! 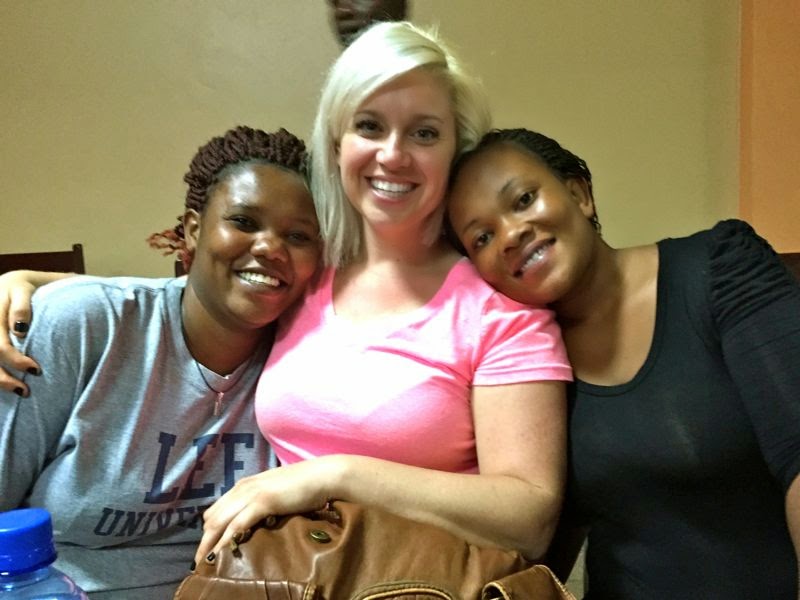 This is Juju's baby who was named after Steve's wife, Connie. 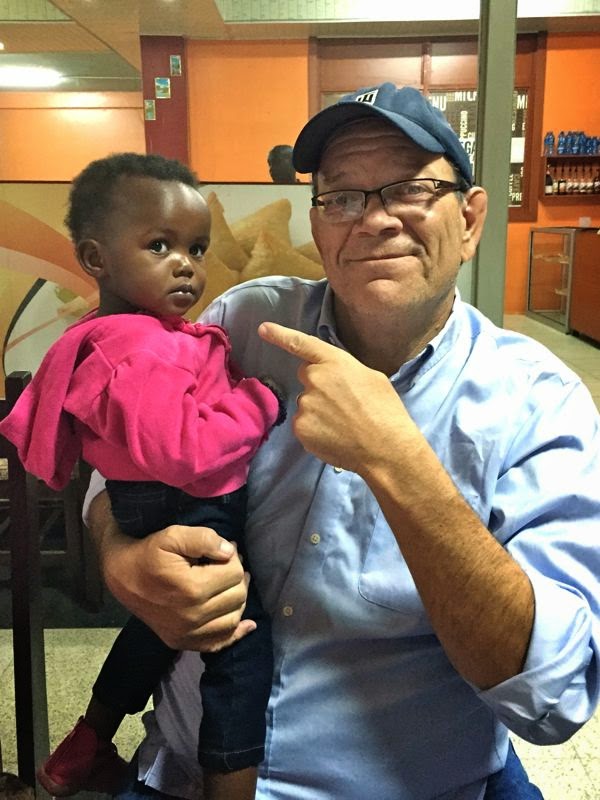 Alright...looks like I'm pretty much caught up. I know it's been a whirlwind, with more than two blogs in a day...but I wanted to be back to a day-to-day posting situation. And, I think, now I can be(!!!!!) So, thanks for sticking it out.

Juju and Connie! Amazing!! Love this adventure and all the joy you bring so many!!

Wow...so much love! How truly exciting to give and share with so many. You are an inspiration and a blessing!!! much Aloha!