Our Final Day in Lodwar

The vans left late Thursday night to make it back to Eldoret in time to pick us up from the airport on Saturday morning. (It’s about an 11-hour drive from Lodwar to Eldoret via Kitale.)

The Ukrainian team waiting downstairs so we could all walk to breakfast together... 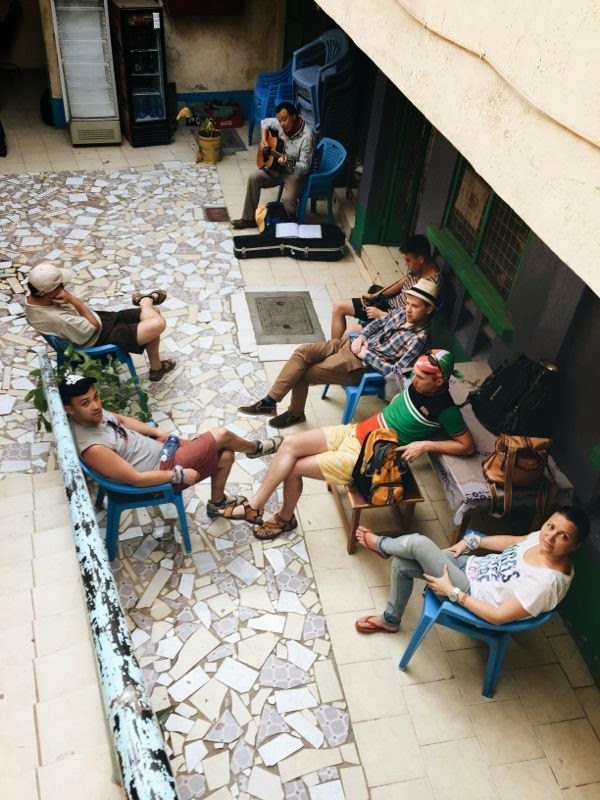 We were a little early to breakfast, so Vlad and I filled time by singing songs he'd learned from radio shows in Ukraine. We sang James Taylor, Bob Dylan and The Beatles. He's the best. 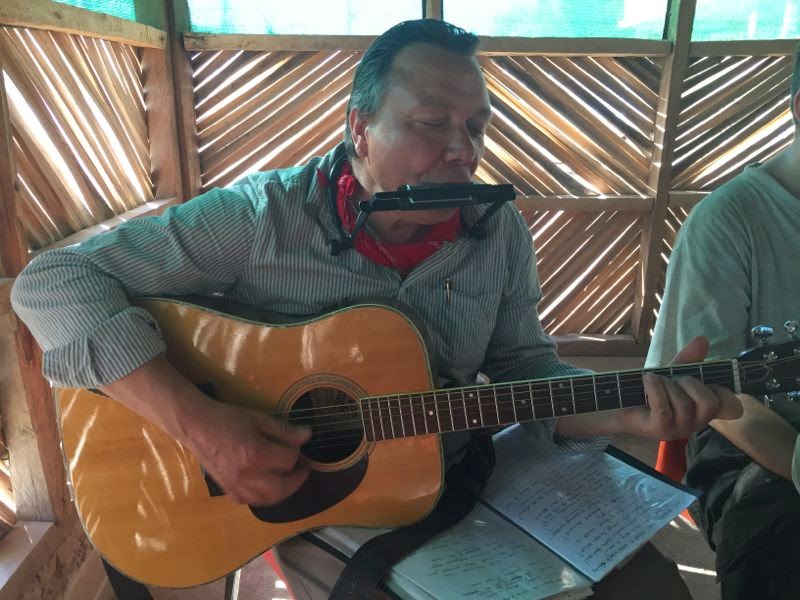 Friday morning, we walked around town, in groups, and talked with people, sharing why we came to town and a bit about our lives. I was lucky enough to be put in a group with Vlad—so we would just walk up to a group of people and start singing and, soon, another dozen or so people would have joined us.

After about an hour of singing in town, we walked back to the lunch spot to cool off. As we entered, another group was just getting back. One of their team members said, “Allison. We have a surprise for you!” and in walked two kids from Oasis of Hope (the center for street kids.) I, of course, promptly burst in to tears. There are two older street boys (now about 20) who had been too old to be taken to school, but had been so faithful to attend the centre, give up sniffing glue, and even, eventually, ended up living on-site in the backroom of the center. Each time I visit, we make a big deal about buying them new shirts and taking them to town to have a nice dinner in a restaurant—with sodas and even desserts—a huge treat for a group of street boys. This year, I had heard they were in Lodwar, so I had been craning my neck with every van ride hoping to see them and at least be able to say hello. And there they were when we arrived for lunch!!! 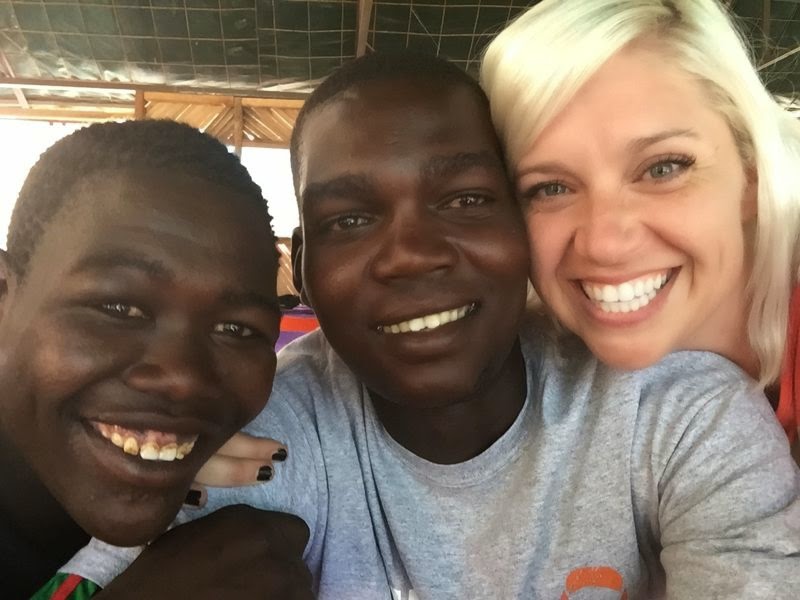 Etao and David told me that P.I.G. (a self-imposed nickname that stands for Peter Is Great) was also in town, so I gave them a little money to take a motorbike to get him. He walked in about 10 minutes later and I could hardly speak from the overwhelming joy of being with these boys again. We ordered sodas and chicken and fries and they told me about their lives. 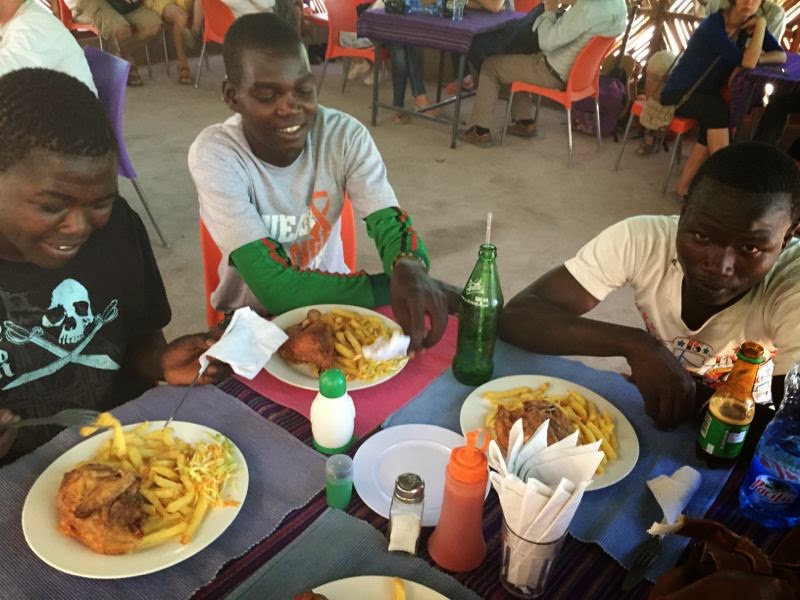 A little while later, one of the boys pointed just outside the restaurant and I turned and saw three more Oasis boys out front. Ten minutes later, two more showed up. And by the end of lunch, Rael and her sister Alice where back too. For a total of NINE of my old friends having heard that I was in town and finding their way to come and say hello. 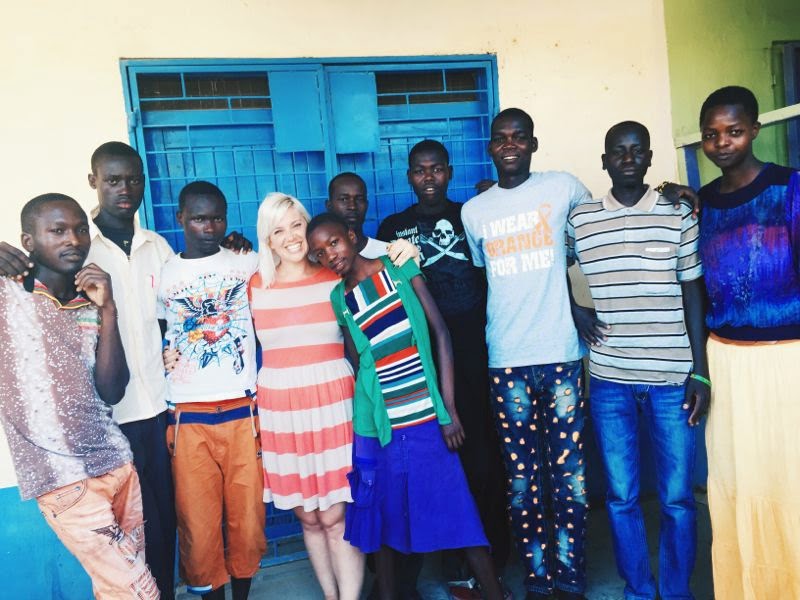 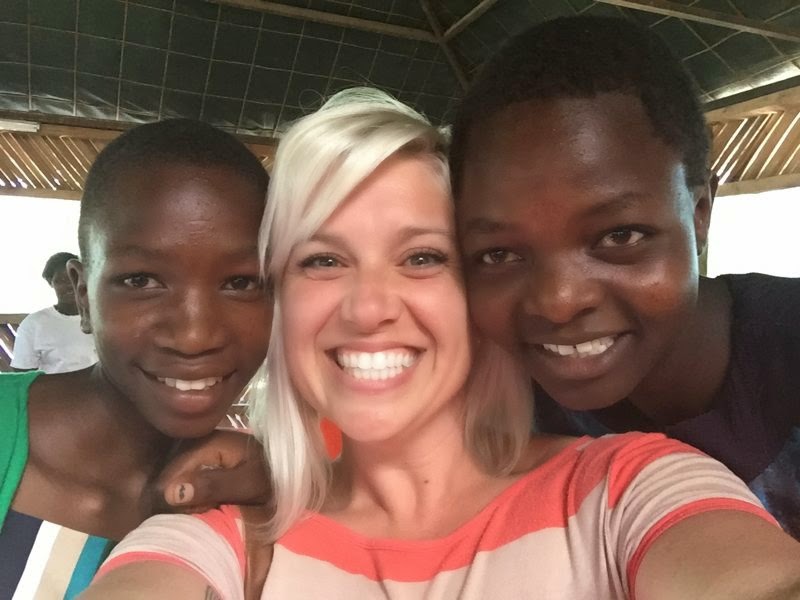 As I was saying my goodbyes, the team was rounding up piki pikis to take to a nearby village. I’m telling you, there are few things more incredible than trailing a mzunguu (white person) piki parade through a town and watching the excitement mount. It was apparent that, as the first few pikis went by, kids had gone running back to schools and neighbors to tell them what was happening and, slowly but surely, by the time the final motorbikes (final of 30+) reached them, they were cheering and hollering and waving like mad. I felt like a celebrity. It was the best. 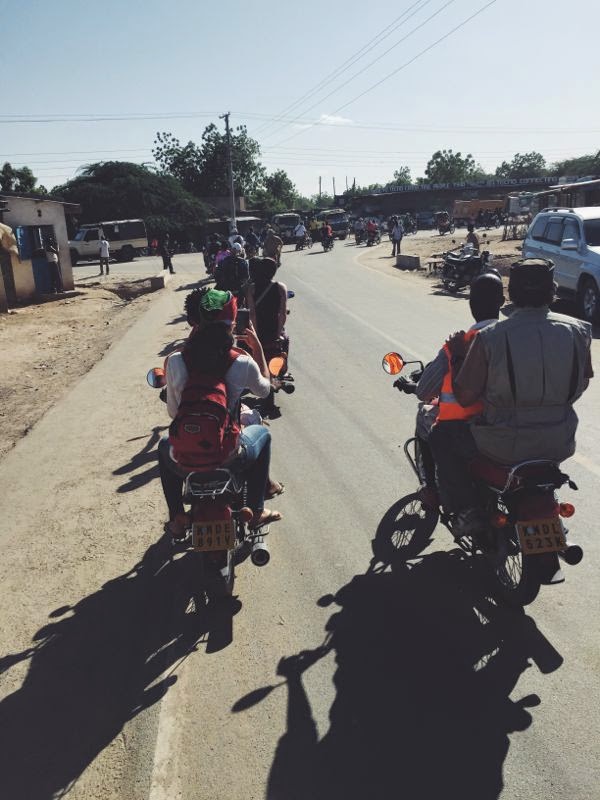 We arrived in the village and were taken in to their church. We took turns singing songs, in their mother language (Turkana), Swahili, English and Russian. Then the pastors greeted us and we greeted them. Translating from Turkana to Swahili to English to Russian and then back. It took a little bit of time, but was such an amazing reminder of how big God is: that he created and understands all languages and cares deeply for every person in each country all over the world. 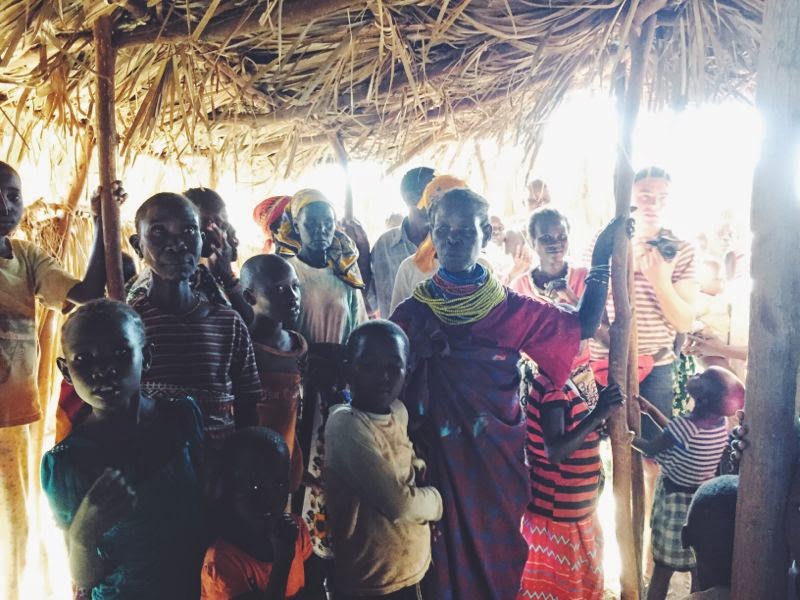 One of the team members had given a large amount of money on behalf of their church to purchase maize for the women in this village. So, we set-up a distribution line and scooped three large cups of maize in to each mama’s bag. 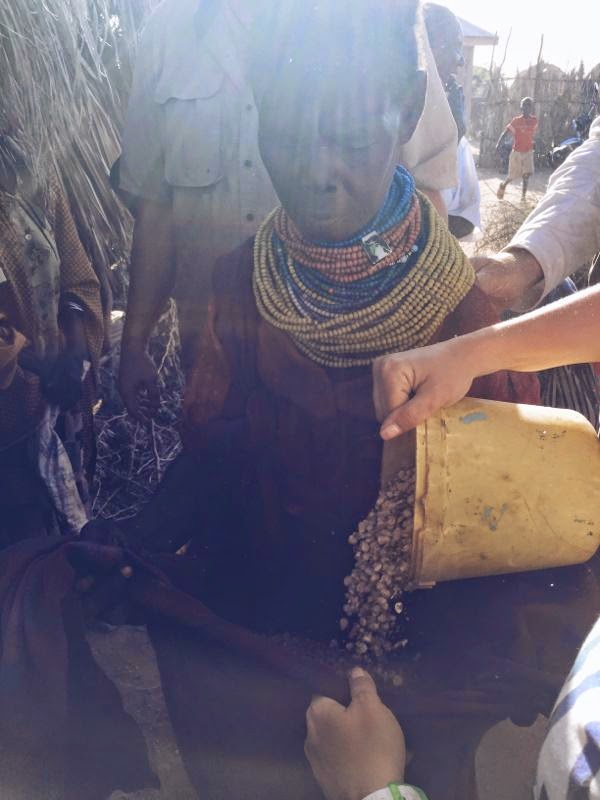 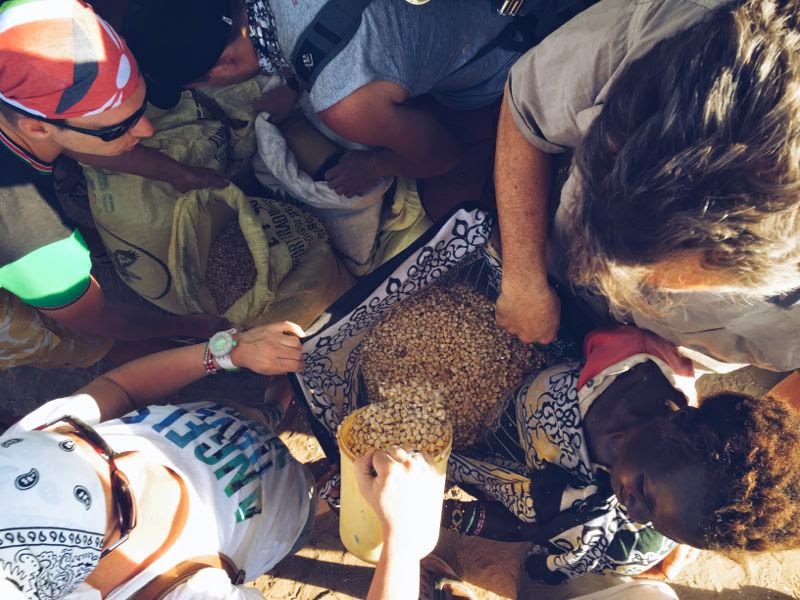 As we had been singing in the church, I kept making eye contact with this woman. So, after she received her maize, I went to find her and introduce myself. Her name is Ann. She walked me over to her home and introduced me to her two sons. She was so proud to tell me their names and how old they are. We are now great friends...and I hope to see her when I return to Lodwar someday. 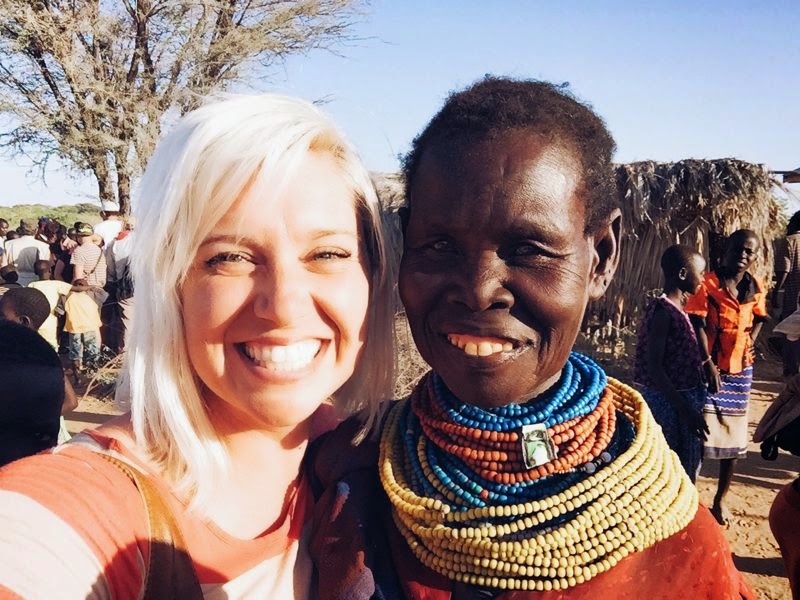 And then, another Oasis kid came up to say hello! Sweet, sweet Korode! 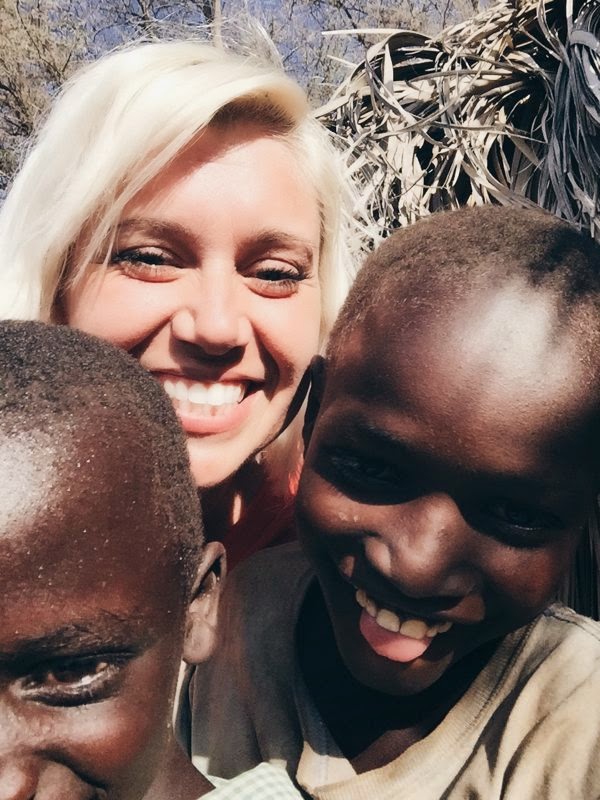 We went back for dinner and each person shared a bit about their experience from this trip...we ended the night together with communion.

On our way back to the hotel, we got a tiny bit turned around and ended up walking in a giant circle. As we went, a crowd of street kids began to follow us. I realized, as they crept out of the darkness and began to walk with us (posing no threat, but scaring the heck out of me as they appeared, seemingly from nowhere) that this as close to a zombie apocalypse that I would ever like to get.

On Saturday morning, we woke up super early and made our way to the airport. As we hustled across town, I heard “Alice!” and turned to see, yet another, Oasis kid who now lives in Lodwar. Michael walked with me as far as he could before turning to head toward work. We hugged and I said, “Love you!” to which he replied, “Me too!” and I ran across the street to catch up with the group.

I can’t believe the number of kids I saw this week. Especially after assuming I would spend this whole time naming kids who’d moved away and would not be seen again. I’m so, so thankful that we had even this brief time together...so they know they are incredibly loved and never forgotten.
Posted by Allison at 5:52 AM

I am reading every line and sharing every moment of this wonderful reunion tour with you! I love you so much and, obviously, so do MANY others!

So beautiful, so fun!!!! Loved catching up on your trip, I feel like I'm there with you. Miss you friend.