Many of the boys from the houses {House 1, 2 and 3 that I continually reference} are former street boys. Most ran away from home as a result of abuse or lack of food and came to the streets of Kitale in search of survival. Their time on the streets ranges from Esokon {3 weeks} to Martin, Bram, Evans and Moses {5-7 years}. They carry memories and reminders of the streets in scars on their bodies and, as was more evident than ever yesterday, they carry emotional scars as well.

We had asked the former street boys to meet us yesterday morning to take us on a tour of town...not just main Kitale town, but the town they knew. The town where they scavenged for food, gambled away afternoons, sniffed glue to escape and huddled for warmth.

I had never seen this Kitale before. I don't think I was prepared for what I saw...and I definitely don't think I have processed it yet.

Allow me to do so here.

First of all, it should be noted that Steward showed up to meet us wearing this. I made a few cowboy and bank robber jokes, neither of which was appreciated. 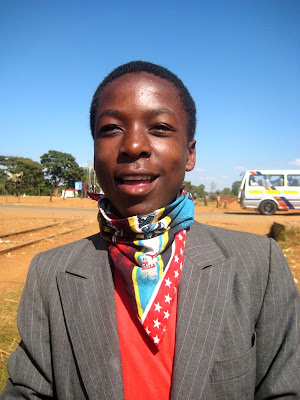 The tour started-off slowly. I think they thought I knew where I was going. Finally, one of them asked: "Where are we starting?" I said, "I have no idea, I'm following you!" And they stepped-up.

They quickly decided a route through town {I couldn't understand the Swahili, but I could understand the pointing and gesturing to mean head this way and come back around.} They also took our cameras so they could take pictures and we could participate. {And also so we weren't the crazy tourists in the back alleys of Kitale.}

We started by walking through an alley behind the bank. They said, before the bank was built, it was a sleeping place for many of the street boys, including Bram. The current shops behind the bank were once a large trash heap where they would search for and cook food during the night. Bram pointed up. "See that big tree? I used to sleep there..."

There was no sadness in their voices. All of this was just statement of facts. Which was not unnoticed or unfelt by me.

We stopped, for a split second and all the boys began to talk at once...looking at me. They were saying, "We can't go back to our old ghetto with empty hands. Can we please bring some bread and some milks for them?" How could I say no to that? So, we gave a little money and they went in to the store.

As we waited, we began to be swarmed by street kids {and what Chris calls street fathers--the older men who also live on the streets}. I stood with Bram and Evans who continued to give me their life histories. I was already amazed, this trip, by Evans' English abilities, but yesterday as the boy in Class 4 translated for his brother in Class 7, I couldn't help but smile.

Bram's story {briefly}:
He left Northern Kenya to come to Kitale. He was on the streets for a while and came to the original Oasis of Hope Centre {which they showed us yesterday--such a treat}. He said, "Mom {Lydia} used to teach me Math and I was high on glue." After a while, the government decided to "clean-up" the streets by rounding up the street kids and putting them in juvenile centres or rehabilitation facilities. Bram was taken to the former, first in Nairobi and then in Mombasa {on the coast}. Over a year went by and Bram ran away from the centre. He came back to Kitale and was found in the street by some Oasis Centre kids who had been sent by Geoffrey to find Bram because he had heard Bram was back. {News travels fast on the street.} Bram came to the then-new, now-old centre and was taken to the group home that day. The boy standing next to me yesterday--dancing with me last night--is so sweet. I can't imagine him living on the street...and I can't imagine not having a Bram at Oasis...or in my life. {This is Bram--in the red beanie} 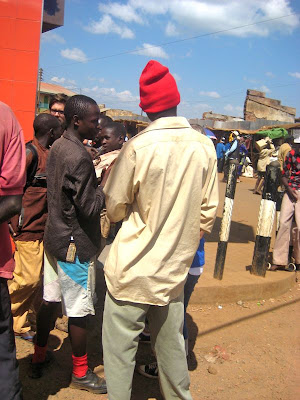 This man came up while we were waiting for the boys. He showed us his cart and said he is a cartman. He asked if we needed him to cart anything. He continued to talk, but I was so much more interested in Bram's story. 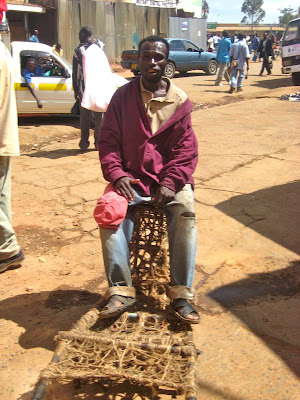 The boys came out of the store with three or four giant grocery bags filled with loaves of bread and single-serving milks. And we walked toward their "Ghetto". Evans, in his newly-acquired gangster voice said, "Hey yo man, this is my ghetto, man!"

We met this street man, Wilson. He took a liking to Bre and held her wrist through the rest of our walk through town. Notice his glue bottle. {A little background, in case you are unfamiliar with glue sniffing: there is a toxin in shoe adhesive that, when inhaled causes the user to become high. They sniff to curb hunger, forget the cold or be distracted from the life they have on the street. It should also be noted that there is a recipe for non-toxic glue, but the companies make too much off of sniffers to lose that profit. Sniffing is popular in street populations all over the world...and many of the boys that were with us yesterday have kicked that habit.} 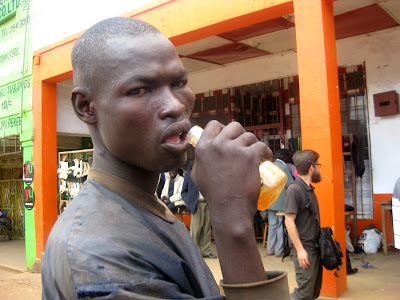 We passed by a large trash heap and the boys pointed: "Here's where we would dig for food." 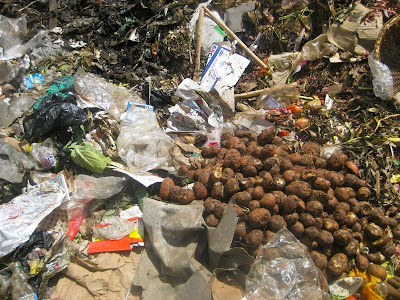 We ended up back here. In their ghetto. It was, essentially, a few wooden shacks leaned up against a building. Moses said, "This used to be really nice. It's bad now." Stone said, "This is where I would sleep! Me and Martin and Timothy..."

They knew everyone by name. They shook hands with friends, sang some songs a little bit, joked with a few of them. Bram said, "These boys are thieves, but I know them. They are my friends." Moses told Bram to hold my bag for me.

They found one old friend who had been hit in the face with a bench on Friday night and had 10 of his teeth knocked out. He had gone to the hospital, but did not have money for any medicine. We gave him 200 shillings--about $3 to take care of his hospital bill and buy some medicine. {While we were standing there, the guy who hit him with the bench showed up, but was chased away--and, evidently, beaten by the other boys}.

The boys had the street boys gather around and gave them each three slices of bread and a package of milk. I wish the video would load because it is one-minute of complete sensory overload, but so incredible to watch. I will have to post it from California. 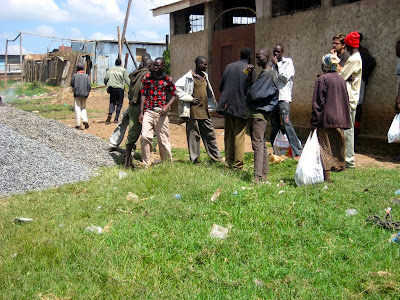 We continued to walk through town. Back behind the buses that take people all over Kenya. The buses the boys will take "home" for Christmas. 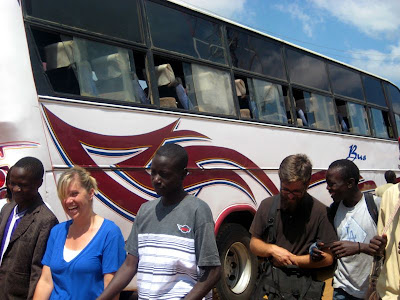 The boys were going to take us to the right of these shops, but we were stopped by another street man who said they found a severed head in that ghetto on Friday...so we just kept walking. The boys were very good about making sure we stayed in the safer parts of the slums. 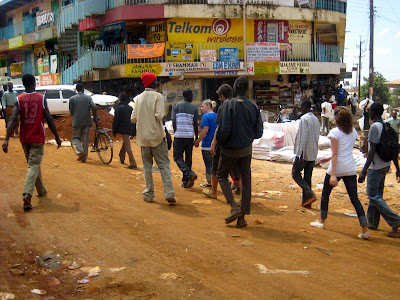 Pausing to decide where to go next...that severed head really threw-off the plan 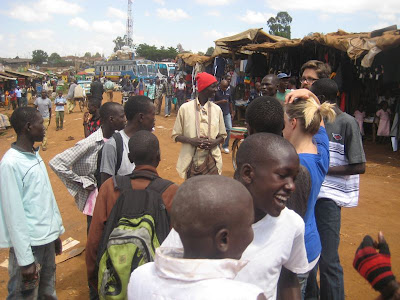 Sweet Evans who came to the streets when he was 7...he is now about 15 and so kind. 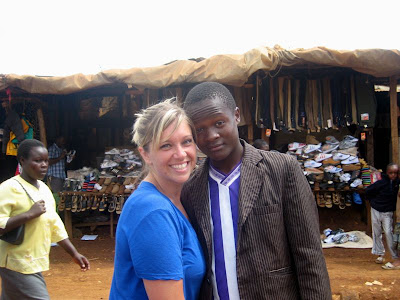 Steward did a great job capturing the morning
We did run in to Joseph {a teacher at Oasis}. He sells books in town when he is not at the Centre. He sold me this really cool, old collection of F Scott Fitzgerald stories for 100 shillings--about $1.25} 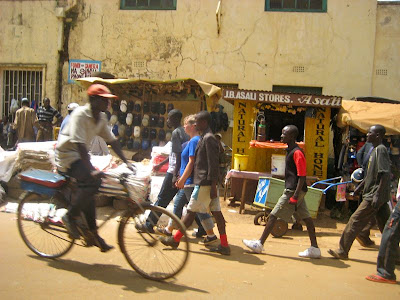 This is where Moses used to sleep. He said, "These shops close at night and you can sleep on the sawdust. It is soft and then you can just sleep with your charcoal bag under your head and be okay." Moses' story is one of the best...but I think I'll have to save it for another post. 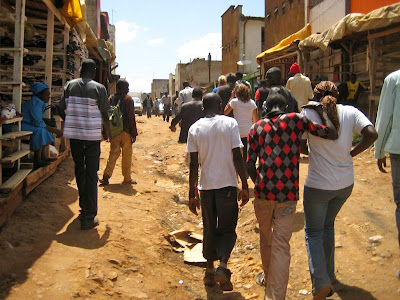 We stopped at the bank to get lunch money. I love this picture of Bram and Joseph. Joseph lived on the streets for a while, too, but would not take us to any of his places...or tell us any stories. I'm not sure about his reasoning, but that too, did not go unnoticed. 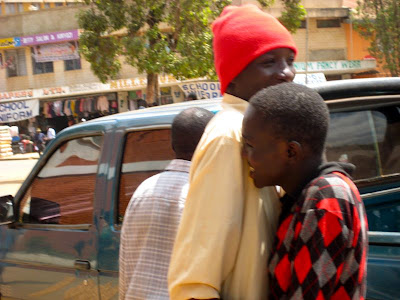 Our group, finished with the tour, walking toward lunch. 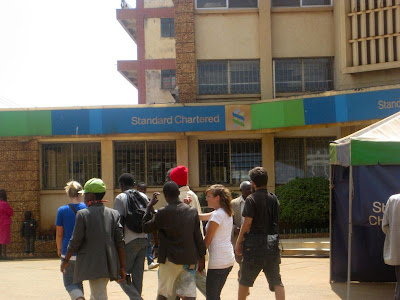 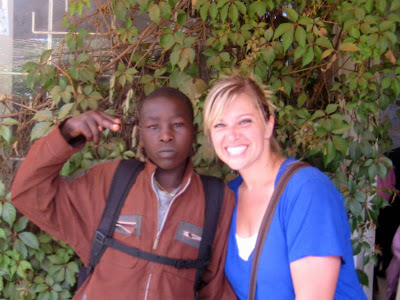 Chicken and chips for 17 people. Geoffrey walked by the window, so we called him to come and join us, too. It was really cool to hear Geoffrey talk to Martin about all of the people we'd seen in town. Geoffrey knew them all. I love that. It shows even more of his heart for the street kids of Kitale. {Evans, Leila, Esokon, John, Stone and Moses} 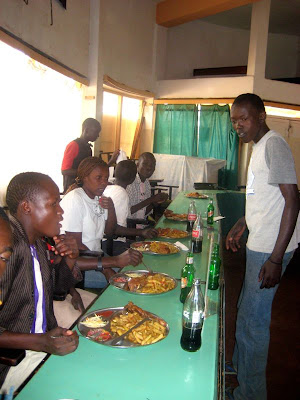 A platter for everyone. Geoffrey wrote each first initials in ketchup over each boy's fries.
Bre, Wiki and Steward 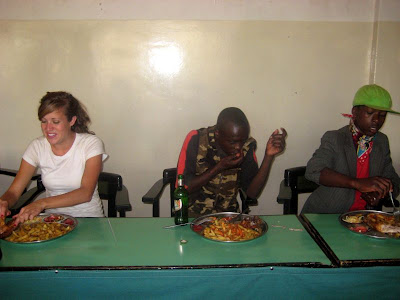 He also tucked-in napkins for the boys.
Evans and Joseph 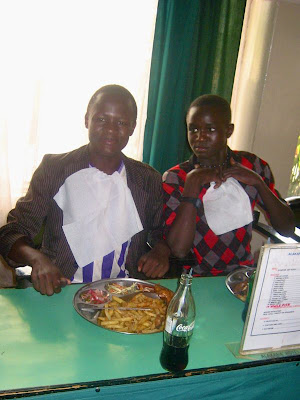 Evans was just one of the boys who cleared his plate. All that was left was tiny bones. 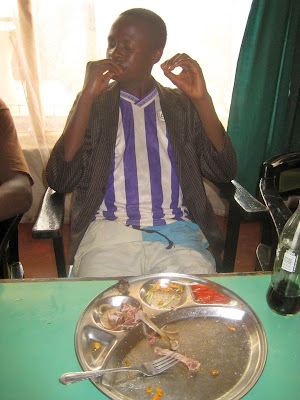 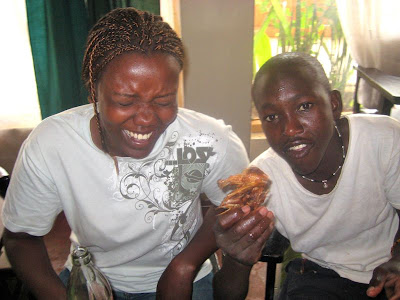 I apologize for the length of this post. Hopefully, the pictures helped a little.
As much as I love those of you who read this blog each day, I wrote this post more for my own memory and journey. I don't want to lose these things...these little moments, conversations, facts. For your sake, I'm trying to contain some of them in an on-paper journal as well.

I can't imagine that this is the last I will post about this morning.
Posted by Allison at 11:05 AM

Amazing. Wow. Oh my. Wow.
This is incredible stuff...I recognize some of those locations...I remember being there...
I can't believe you'll be home in a few days.
I can't even imagine how much they are going to miss you.
And vice versa.

touching and scary stories. the glue sniffing- i'm sure you know- unfortunately has the effect of destroying brain cells. so what you are doing is making a real difference to those young men. on so many levels.

thank you for writing down these stories.......I love you!