Come Again, On My Birthday

Saturday, my actual birthday, was equally as fun.
I woke up early to have a cup of coffee and watch some TV on DVD, knowing that my parents would call super early {just as they did last year!}
My mom called first {though my dad won last year} and said really sweet things like "Wow, I can't believe you are almost thirty!" and "If you're 27, I guess I have to stop telling people I'm 28."

No more than 5 minutes later, my dad called. He was great at making sure I was caught-up on the balloon boy controversy...otherwise, I won't understand SNL jokes this season.

I came back inside to find Bre and Jordan awake. Bre made French Toast for the house and I ate mine with a giant glass of Coke {if only there were Dr. Pepper in Kitale!}

Post-toast, we sat down to make sure we were keeping accurate track of the sans-internet days.

Grilled cheese and salt & vinegar chips for lunch...and then a super hot shower...

Made a giant tray of brownies and headed to House 2 for another birthday party.

We played a few rounds of Uno while we waited for the boys to come back from their day of helping a friend dig a ditch. {I didn't ask...}

They made a HUGE pot of chapati, and another of beans. {Seriously, I could eat beans everyday and be so happy.}

There is a Kenyan tradition of throwing water on the Birthday Human...I asked {and then begged} to be spared of this form of celebration. {Layla said, "Since you don't usually get a big party or many gifts, they pour water on you...because you will always remember the day someone poured water on you." Good logic, but I'm still not interested.}

Instead, Bre suggested they make me a card. Stone instantly ran and got some paper and pens. I can't wait to frame it when I get home.

While all of this was happening, I danced with Evans, Martin, Pato and Joseph in the front room. And then took some pictures:
Moses 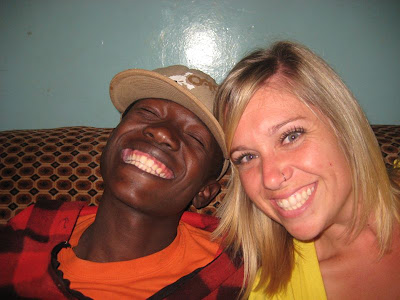 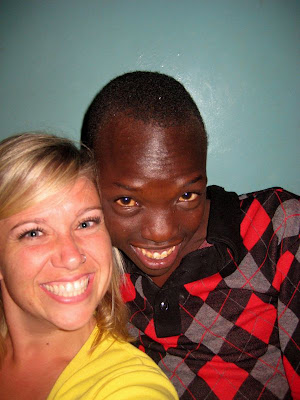 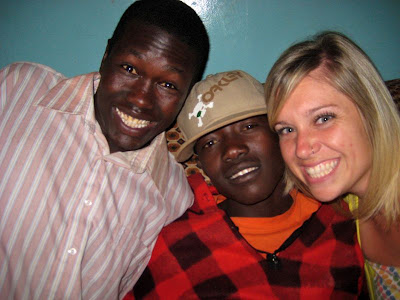 Moses claims he doesn't know how to smile...but I think he does a pretty good job
After we took this picture he said, "Allison...can I say something and you won't get mad?" {Um, sure...} "Last year, when you came, you had a food baby...and well, this year, the roundness is gone...it is nice." {I wish you could read this in his voice...it makes it that much better} 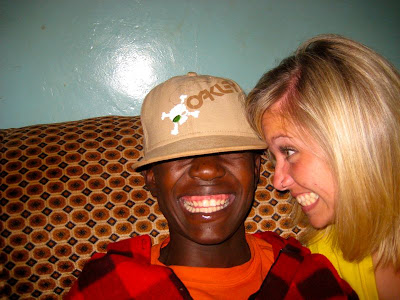 The boys said, "We would love to do one dance for your birthday" 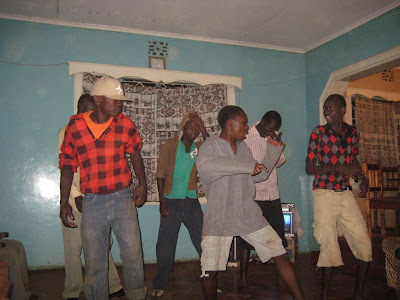 They ended the night by rapping "Allison, we love you a lot" {in Swahili}, using their soda bottles as microphones...

Another night of thinking, "Seriously, I love this place"
Posted by Allison at 10:31 AM

Last night I was telling Sarah how important I thought it was to have 'inside jokes' and special silly lines that are said with her kids. I told her that most of the things I say today have some sort of tie-in to something that happened when you and Zac were kids.

Of course it started because Elijah had gas. (A lot of gas.) And I was calling him 'Gassy Gertie'. I said, "if Allison was here, she'd say 'Gassy Gertie had a hernia'"...

I can HEAR, "Come again...on my birthday" loud and clear.
I guess you don't plan those things. They just happen. And, maybe, just to us.