Yesterday, we had the incredible opportunity to accompany Sister Freda and some of her hospital staff on a mobile clinic in West Pokot. Freda {and Richard} rotate through the surrounding communities and put on a free clinic every Thursday.

Prior to the trip, Freda {throughout this post, italics denote Freda's voice} had shared a little background with us:
In many of these communities, there are no hospitals within a two or three hour walk. Can you imagine carrying a birthing mother or a sick adult on your back for two or three hours? Many die on the journey to the hospital. And even if they make it there, they have no money to pay the cost.

So they began to partner with local pastors and hold clinics in their churches. When we arrived in West Pokot, the church was already crowded with people who had heard the news of the clinic. They were singing and praising God that medicine and care had come to their community. 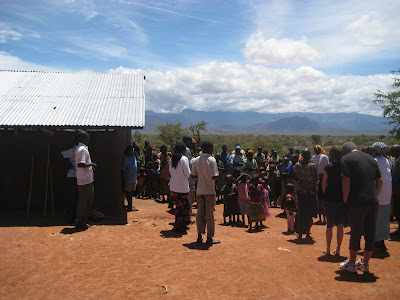 Richard was wearing a hat from Montage. I had to take a picture to show the contrast between where we were and Laguna Beach. 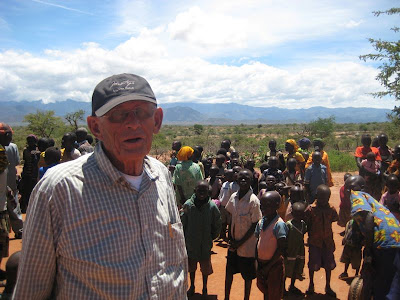 Freda's team was inside and organized very quickly. Each person knew where to be and even how to best include me, Bre and Jordan.

The pastor stood at the door of the church, allowing only a few people in at a time. Each group started at this table where they shared their ailments and were diagnosed by these women. These two {in the coats} would write the recommended medicines on a paper, along with the person's name, and hand it to the patient. 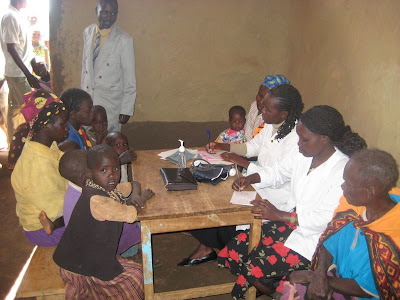 The patients, with prescription in-hand, would move to these benches where they waited to have their prescriptions filled. 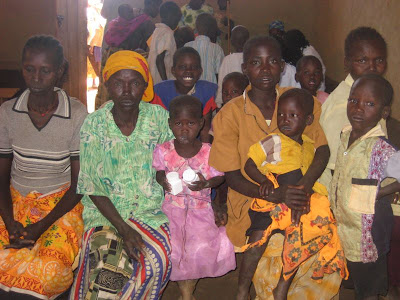 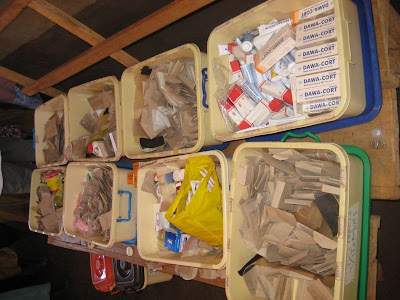 Each family was called, in order of arrival. The medicine was handed to each child, so the mother would not be confused by all of the different bottles.
Many times, we tell a mother to give the medicine after meals or with food and we found that there is no money for food, so mothers were not giving medicine because there was no food to take it with. 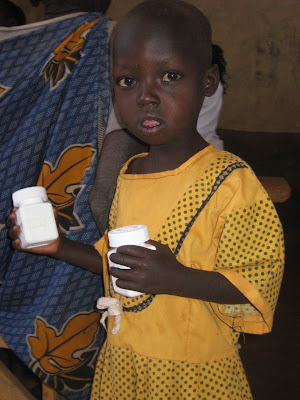 The team was even equipped with safe and sterile immunizations for children and pregnant women. I teared-up watching a dad hold his small son who screamed the entire time he was given the shot...
Since mothers often give birth in the homes, or can not afford medicine, many children are never vaccinated against TB or other diseases. We find, many times, that children have never had any immunizations. 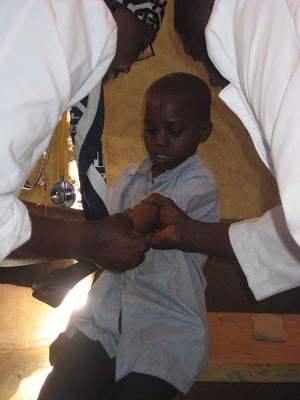 Freda also brought along a staff member who set-up a VCT {Voluntary Counseling and Testing} station where patients could choose to be tested for and informed of their HIV status. With many VCT centres starting in Kitale, the hope is that the stigma associated with being tested would be removed. In the past, people would not be tested because it was thought that if you were tested, it meant you thought you were positive. 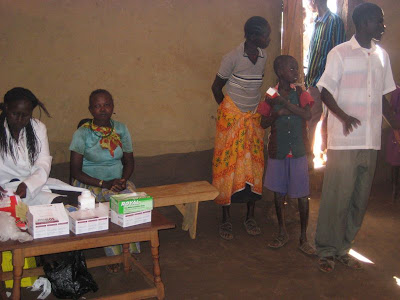 Sister Freda took a turn at each station. She began with the diagnosis table, but in the end was filling prescriptions as quickly as she could. Her headwrap was a gift from an American woman who had come on a team here. She asked that I take a picture so that she might see it. She also asked that I "greet everyone back home when I write". {I did not try to explain the concept of blogging, so I just said, okay.} 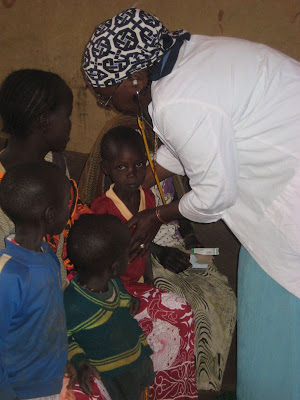 Bre and I were given the task of labeling and filling bottles with various liquid medicines. A small strip of medical tape was put on each bottle, on there we would write the name of the medicine and the frequency of usage {for example: 1x2 to denote "take one spoonful, twice a day"}. We then filled the bottle and set it in front of the large bottle to make it easier for those filling prescriptions to quickly grab what was needed. 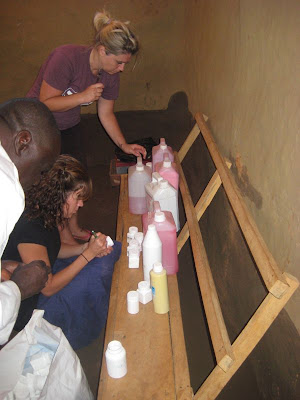 We filled, and they distributed, hundreds of bottles of medicine. 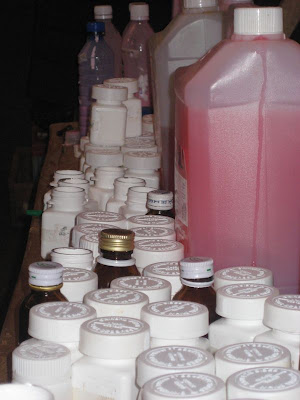 Toward the end of the afternoon, we were using any bottle we could find: soda bottles, empty Tylenol bottles. This was my favorite: 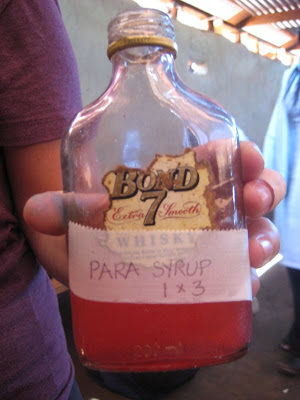 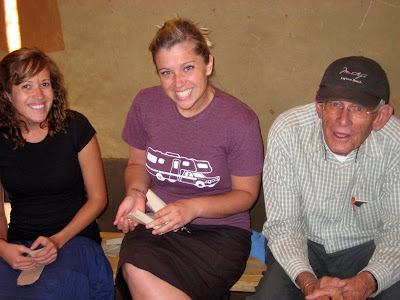 We also talked to this Doctor, Stephen, about his life. He was a doctor before working for the government for about thirty years. He has six children, all grown with children of their own. He is retired now, but works for Freda on the weekends, in her operating theatre "to get by". {Bre and I sang Taylor Swift's "Hey Stephen" for most of the afternoon and giggled at the idea of those lyrics being written for this Stephen.} 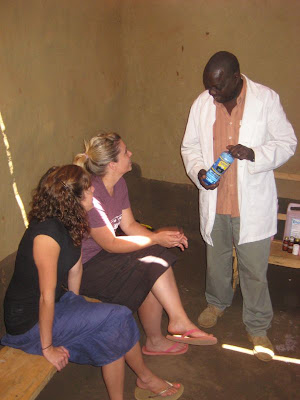 Freda called Jordan over to take a picture of this mother breast-feeding her almost three-year old twins simultaneously.
The children are obviously malnourished because the mother is not eating enough to keep herself healthy, so the babies can not get the vitamins they need. No vegetables, no money for meats. Its no wonder the babies are so unhealthy. 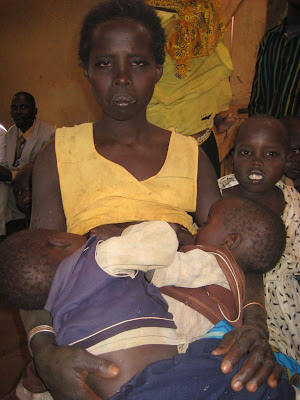 This mother arrived toward the end of the day with her seven children, each of them needing some sort of medical attention.
Many families have up to ten people sleeping in their homes with no windows or doors, so if one comes down with a sickness, it will spread to everyone in the home. 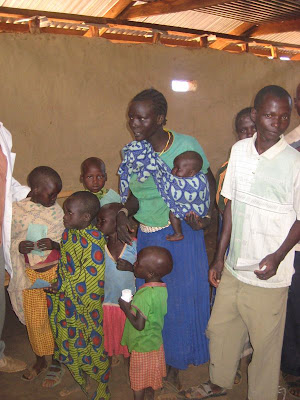 Around three o'clock, Richard stuck his head in the window to let us know it was time to start winding-down and packing-up so we could head home. 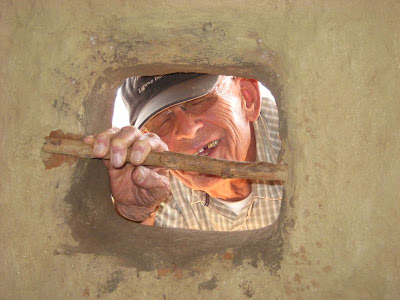 For some reason, that was translated as "let everyone else inside"...so the room quickly became crowded and the staff began to work as quickly as possible. Medicines were running out, bottles had been gone for a while, but there was always a plan B for the patient {for example: tablets instead of syrup.} 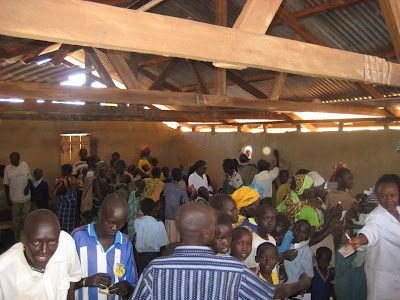 We knew that this area is lacking in food, so we brought a large bag of beans to leave for the community.
After giving the beans to the pastor, and receiving a rooster {live, bound by the feet, stuck under the backseat for the drive home} as a thank you, we headed back to Kitale.

On the drive we saw beautiful scenery, a huge vegetable market {where we shared a roasted corn}, and Freda unwrap and feed Richard a small candy.

Wow...what a day, indeed! I will share the photograph of Richard in the Montage hat!
Please tell them all that I said hello!
I kinda wish I was there...