Tuesday morning, the Oasis kids and the Saddleback students (and leaders) were totally excited to return for another day of camp!

I thought, instead of sharing the day chronologically, I would begin with two of my favorite pieces...this way, if you want to skip the words and look at the pictures, at least you are not missing what I think are the good parts.

1) Bushuru (pronounced Boo-shoo-roo) lead a song...Now, in case you don't know, Bushuru is one of my favorite Kenyans. He is about 22 and is a little bit slower than the average twenty-something, but he is the kindest, sweetest friend. I like to yell, "You're my boy, Bu!" 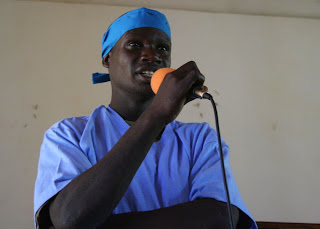 2) This is Elizabeth. She recently was taken from the centre to a local school, but skipped a few days so she could come to camp. She showed up on day two and pulled a shirt out of the pile from the day before...Lucky for her, she got my favorite.

The word 'name' in Swahili is 'gina'. So, when the little kids were making shirts with the Saddleback students, and said, "I want my name on the shirt"...it translated as "please write Gina"...so...my favorite shirt from camp: 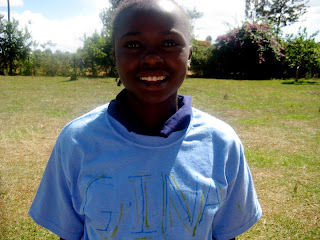 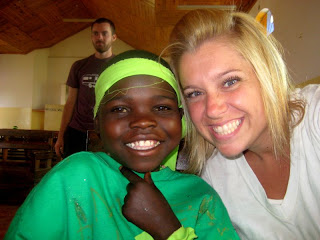 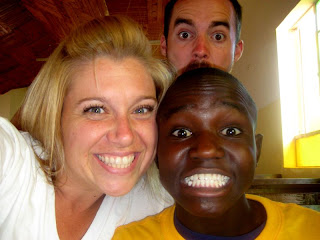 The day began with the impossible shot...Here's the commotion when someone hit it! 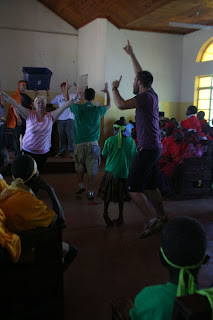 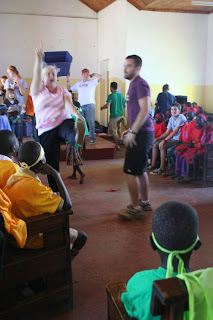 And then one more person! 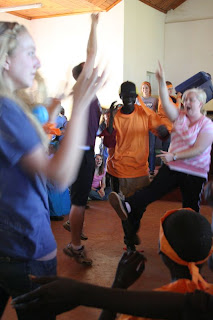 We also played bucketball (after Bible story and testimonies)... 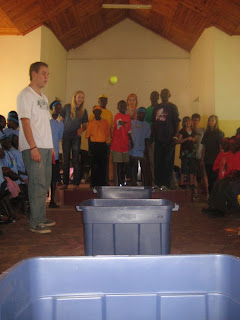 This tennis ball did not go in the tub, instead, it hit me in the head. 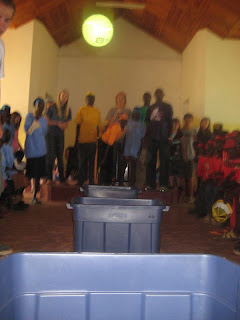 We played a huge game of "Duck, Duck, Goose" (the smaller kids played "siwewe, siwewe, wewe" meaning "not you, not you, you" and even Abby was playing in Swahili...don't worry, Ron, Jaime got the whole thing on film). 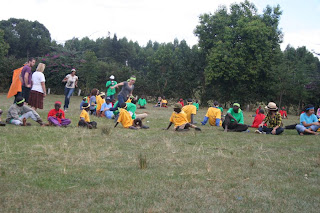 And the day of camp would not be complete without a little tug-o-war. I chose this picture because this was an unbelievable moment: the yellow team had been winning, until a leader jumped on the other side and pulled against them. It all went downhill from there (for the players...for the spectators, it only got better). The yellow team, clearly losing, should have let go and walked away...oh no. Instead, they held on and were dragged (over each other and one of their leaders) across the line. I could hardly breathe from laughing so hard. 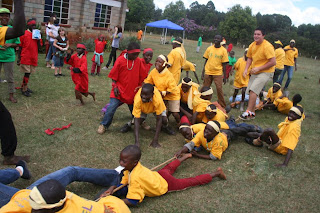 The over-under game...clearly, the little guys were at a disadvantage... 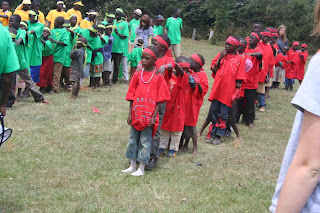 After lunch, we went to Gilgal...they put on an entire performance for us...Daina and I gave our collage of photos and said our goodbyes...

Gina will love that shirt!