I Spent A Week There One Day

So I know I'm clearly biased, but I think Benja is one of the cutest kids ever. Yesterday when we went to Discover to Recover, (thinking we'd visit for an hour and then come home to do laundry) he was climbing on these big bags of sawdust...and I couldn't help but take about 40 pictures of him...here are just a few. 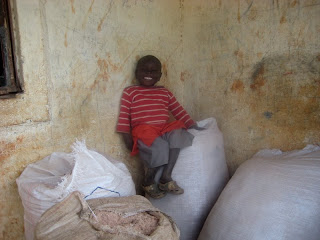 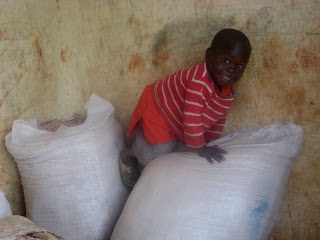 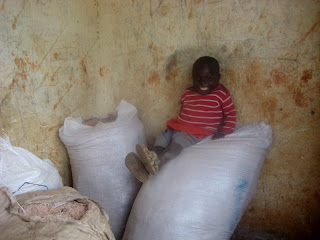 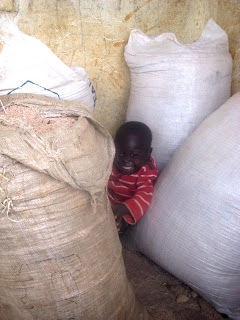 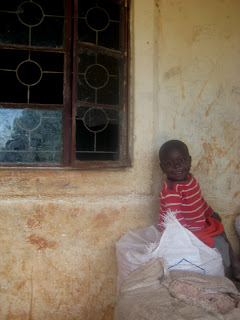 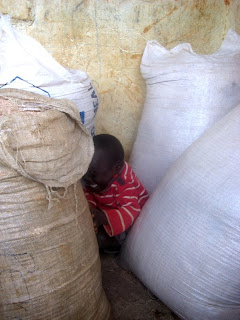 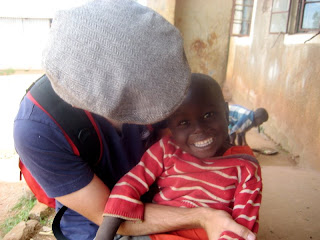 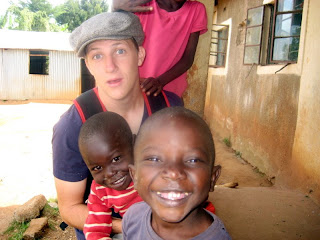 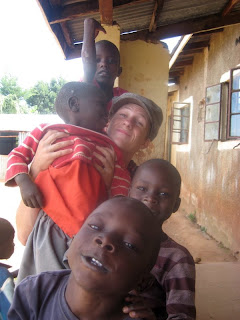 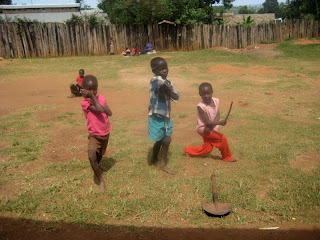 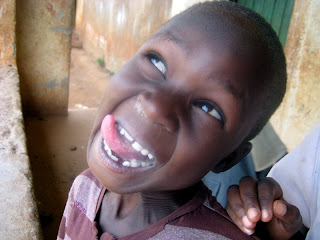 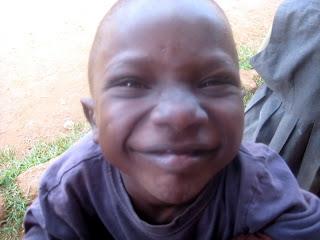 Kenyans say Chris' name with a think rolled 'r'. Benja can't make that rolled noise yet, so he calls him Clis. Yesterday he yelled Chris' name every 2 minutes...it was really, really cute.

As I took photos of Benja, Chris wandered around the Centre compound. He came back with two little, hurting kids. One boy, Meshack, had sores all over his head, including his ear (which looked like the skin had been falling off) and another, Churchill, who had a big boil on his head that was hurting him so badly he was sitting in the corner crying. So Chris offered to take them to Sister Freda's. We jumped in a cab with Meshack, Churchill and Churchill's brother, Elias and headed to Freda's.

We arrived to a fairly peaceful hospital. The workers were great with the boys, asking them questions, saying they would feel better soon. Freda drew blood from each of the boys to test for HIV (we already knew Churchill is positive, but were nervous that Meshack might be too). As she prepared them for the needle prick, she explained the whole thing to them...she is so gentle and tender, the boys were very comfortable with her...and I was the stand-in-mom feeling very grateful for her tenderness.

While we waited for the test results and prescriptions, Freda had lunch made for the boys. They sat in the pediatric ward (painted by the Ukrainians with animals and butterflies) and ate beans, rice and guavas. We headed to the house to have lunch with Freda and Richard (beans, rice, potatoes and a banana).

After lunch, each of the boys had an injection. I sat in the room, rubbing their backs and looking in their eyes, trying, wordlessly to distract them as they were shot in the butt...the first boy winced, but did not cry. Meshack screamed and cried, which, of course, made my eyes well up.

As I'm standing in the injection room, Chris yells "Alice! Elias was just bitten by the dog. He's bleeding pretty bad." One of the dogs on the compound has bitten three people in the last month. Elias had big teeth holes in the back of his right thigh...and was fighting back tears (as a ten-year old Kenyan boy, you don't cry when you're hurt).

So, though we had been ready to leave, we now had to wait as Elias had his wound cleaned up and got a tetanus shot. Then, we were told he'd have to have a series of rabies shots, in town, just to be safe.

We pack up all of the medicines we had been given (three for each boy), prescriptions to take to the chemist in town, and the name of the rabies shot clinic and sit, waiting for our taxi. (Our two frequent drivers were busy, so Dan sent a friend to get us) Oh, and we thought we'd be gone for one hour, so neither Chris nor I brought much money...we had to give a verbal IOU to Freda. We're ready to leave and Freda comes to tell us not to worry, the dog had been killed. They caught it and "bonked it" on the head. "One bonk and it was done." Richard was sad over losing his dog, but said it's cost more in rabies shots this month than it is worth...

Our taxi took us to the house to get money, to the chemist to fill the prescriptions, to the clinic for the rabies shots and then back to Kibomet to drop the boys and explain how to administer the now dozens of medications. Crazy.

Here's Churchill, Meshack and me in the waiting room while Elias got his rabies shots. 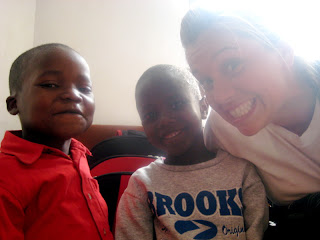 Chris offered to stay until the director made it to the center to be sure she knows all about the day...I took our taxi back to Lydia's to spend a little time with the Oasis boys...I played (and beat) Elvis in 3 straight games of PIG (shorter version of HORSE). He then won the next 3. I love those boys...but I know you already know that.

We all made it home around 6...it was a very, very long day. I took a nice (hot!) shower and sat down to blog, but the internet was sketchy...so I watched some One Tree Hill. Thanksgiving left-overs for dinner, chocolate cake and Harry Potter 4...not a bad end to a busy, but not terrible day...
Posted by Allison at 9:27 PM

Wow. I'm exhausted just reading that. Wow...wow...wow.
Do you realize how dull your life is going to be when you come back?

I'll tell ya one thing, I know why the Hamers ended up with two little Kenyan boys. I don't know how you're going to part with Benja...
and vice versa.

Holy crap. My heart breaks for those boys. I'm so glad that God brought you to Kenya to love them right where they're at.

I miss the crap out of you but I'm so glad God is using you to forever change the realities of children across the world.

I'm so proud of you.