Mama Lavender Had A Farm...And A Few Other Stories From Tuesday

Tuesday morning started like any other...we wandered up to the kids' house ready for whatever the day might bring. Little did we know just how much this day would hold!

Lenny hanging around the kitchen 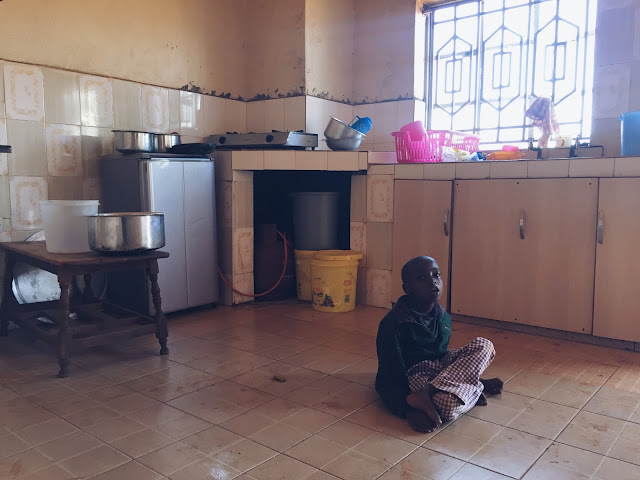 When we pulled up, Willy asked if I would give him one shilling to go buy a CD at the shop. About a half hour later, he asked for another so he could also buy mandazi. How could I turn down this face? 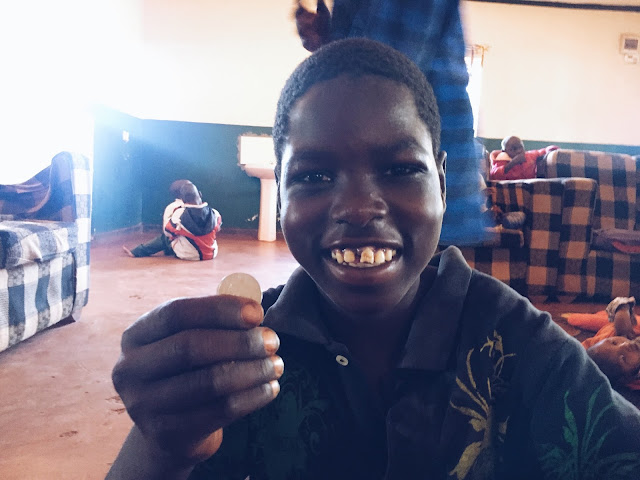 As we sat around on the floor, I made Moses a hat out of a bread bag. He loved it! 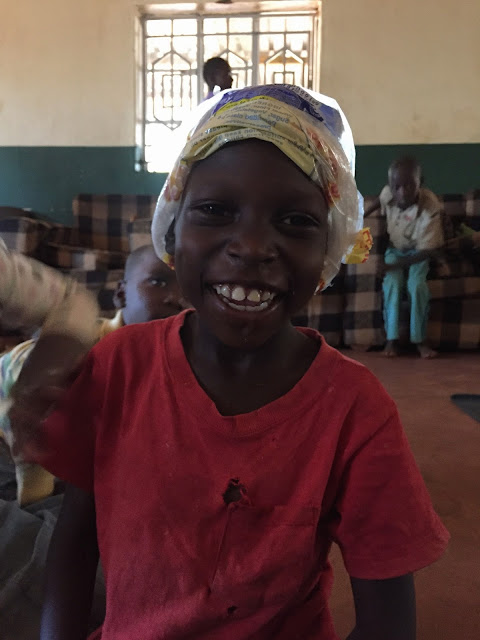 One little boy, who currently crawls, was able to stand all on his own Friday afternoon. Sammy expects that he'll be walking on his own within six months. (This story is true for Moses as well!) 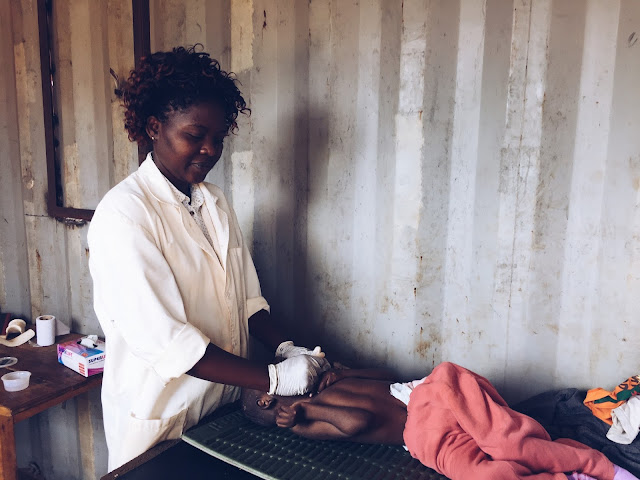 Caleb working on sitting up. 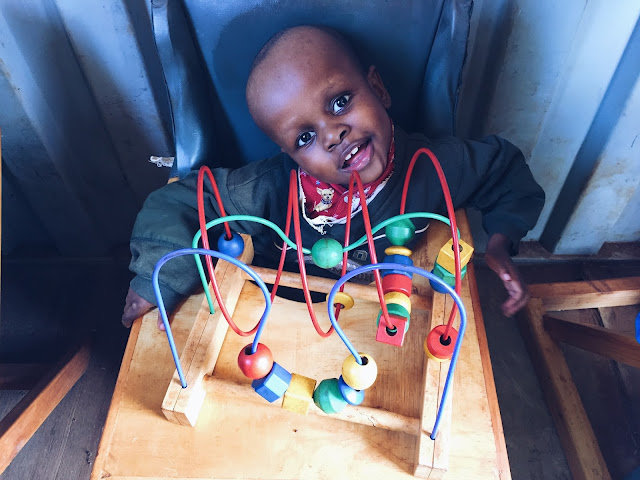 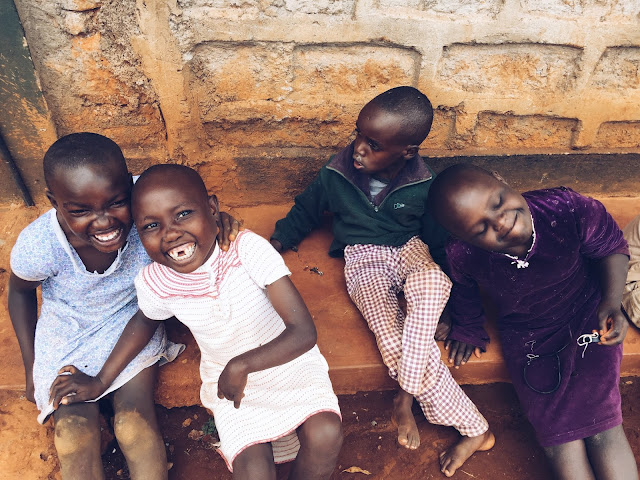 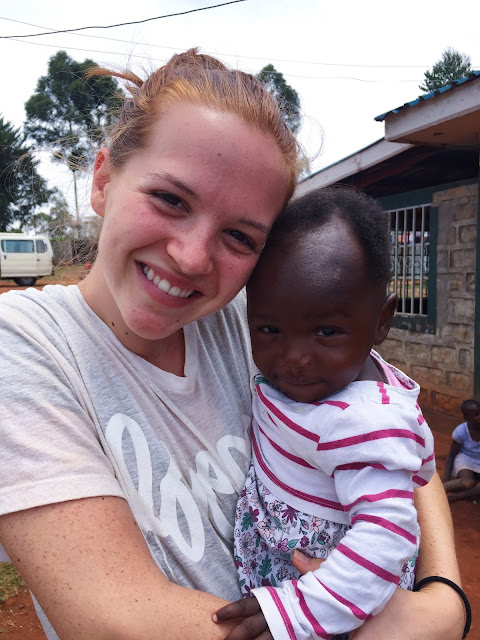 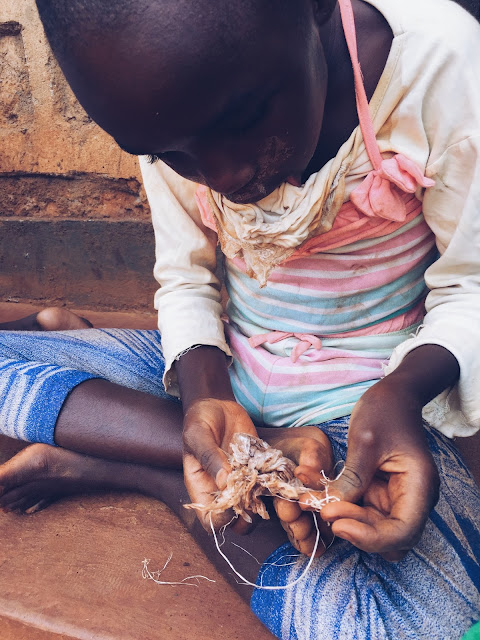 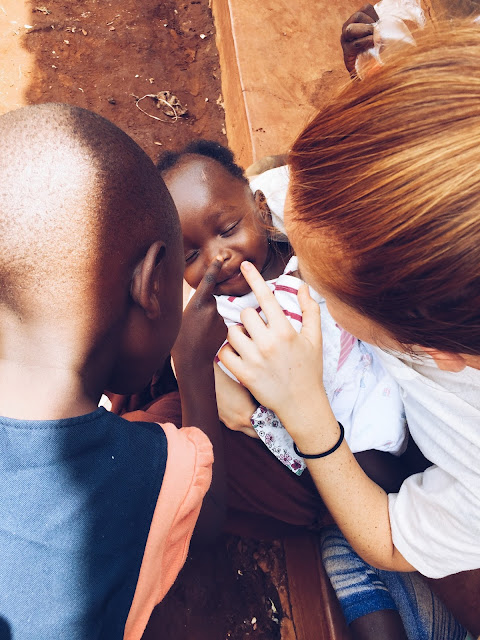 Maize for lunch and cabbage for dinner...the food preparation never ends around here! 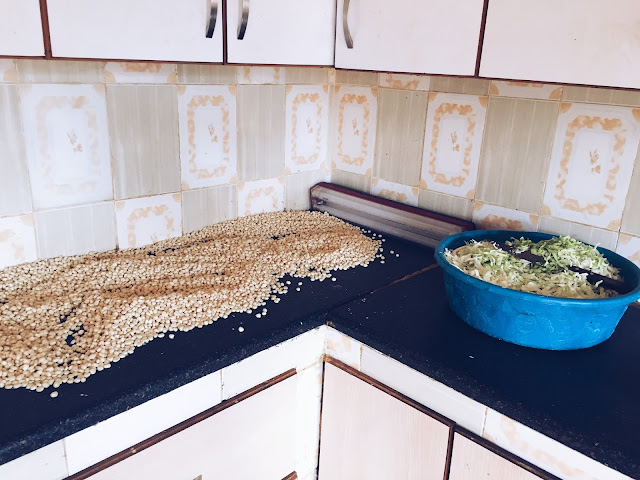 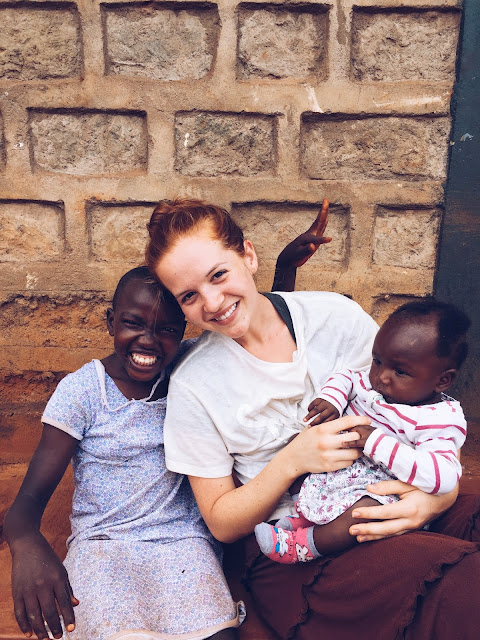 A little while later, I caught Sunny teaching Linah a new game! Linah was concentrating so hard and giggling each time she messed up. Sunny was gracious and they'd start up again. 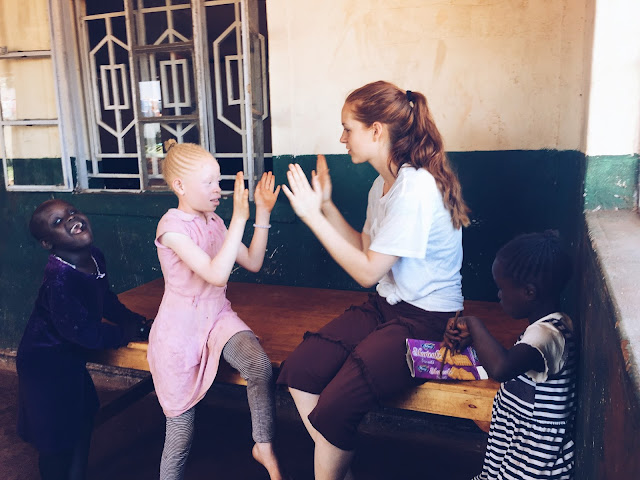 This is my buddy, Allan. Allan was born with hydrocephalus and the doctors, instead of putting in a shunt to drain the fluid, drilled holes in his head, which resulted in brain damage. His mother, Collette, works very hard to keep her other two children in school, but when Allan got to be too big and too loud to sit while she worked, her job was in jeopardy, so Allan came to live at Precious Kids Center. A few months later, a job opened up at PKC, so Mama Allan came to work at the house.

Allan sits in the same spot every day and sings to himself. He also grabs arms, legs, clothes--anything he can--as people pass or sit nearby. The other kids love to play with him--letting him grab and pull their arms as he sings. Unless it ends in a bite--which happens unexpectedly. The kid is FAST...and laughs hysterically when he knows he's surprised you. 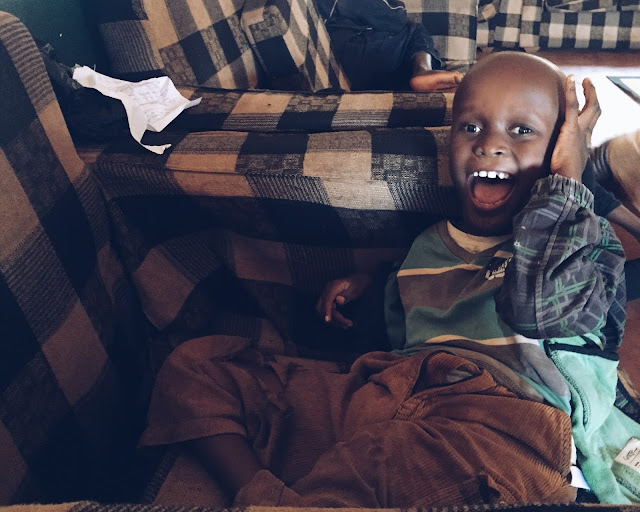 I like to greet him a few times a day by singing his signature 8-note song to him. He usually smiles, sings it back, and then slaps my hand a few times. 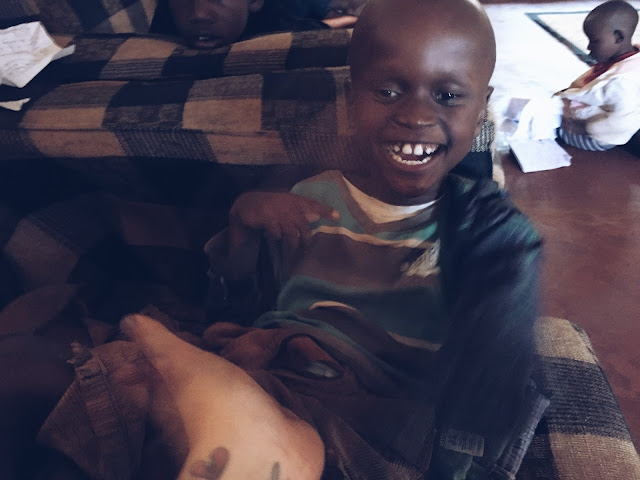 Githeri for lunch! My favorite! 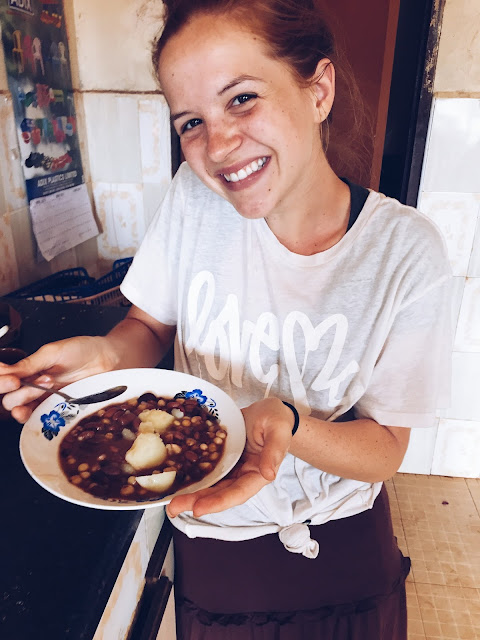 Suzie and the friendliest guard dog in the world 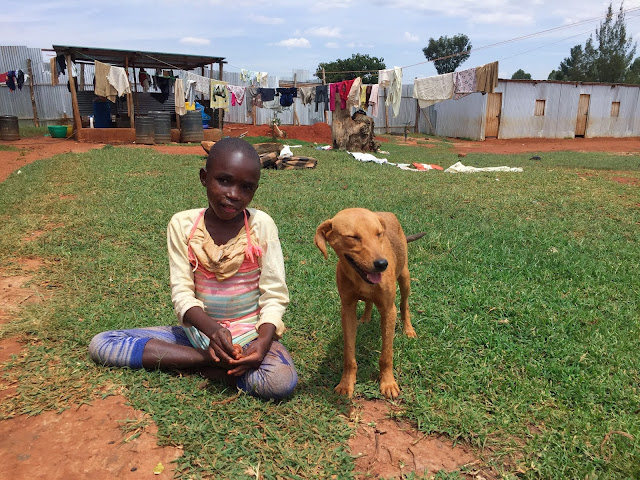 In the Fall of 2015, we helped Mama Lavender begin a small farm on the plot of land in front of her home. Sammy mentioned that I should go and see her because she had some big news to share. So, Tuesday afternoon, the house moms got Lavender all dressed up and ready to go visit her mom.

When we arrived, Mama Lavender greeted us, scooped up Lave and carried her in to the house. 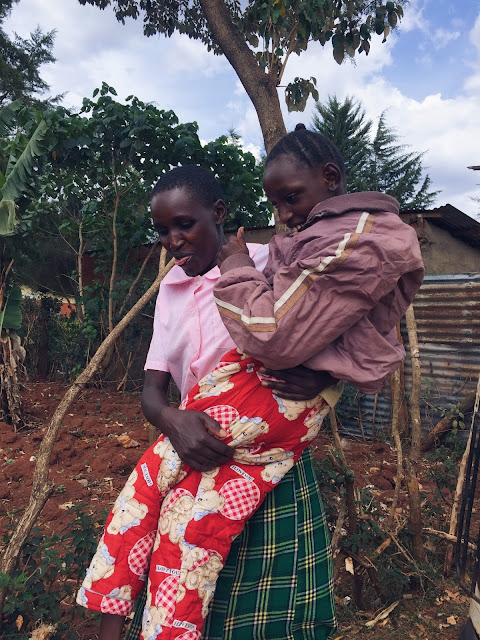 We sat for a few minutes and talked about the kids and Sammy and then I asked how the farm was going and she took me outside.

She said the farm had gone so well that she'd saved enough money to buy the family a goat! She'd originally paid for two and brought them home, but then decided they were too small, so she went and returned them for one that was bigger and stronger.

Goats provide milk for the family and, often, enough to sell. Most likely, she will keep the first baby, but sell the rest. This is a prized possession for her family and she will take good care of it. She also mentioned she has seeds remaining that she'll plant this coming year, so there's more goodness to come! 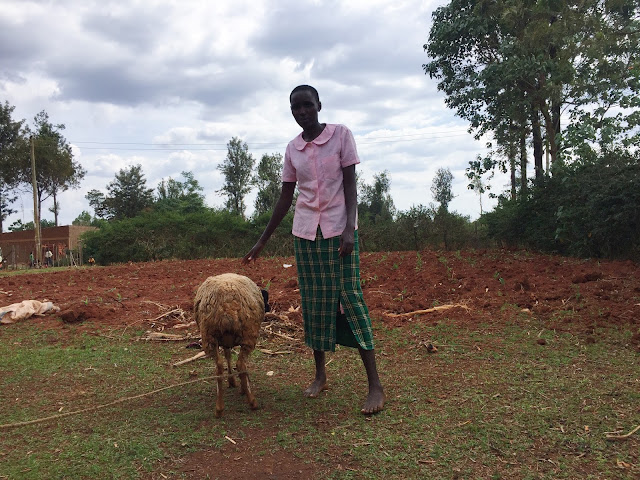 Mama Lavender and her children.
As Sammy said, camera-shyness runs in the family! 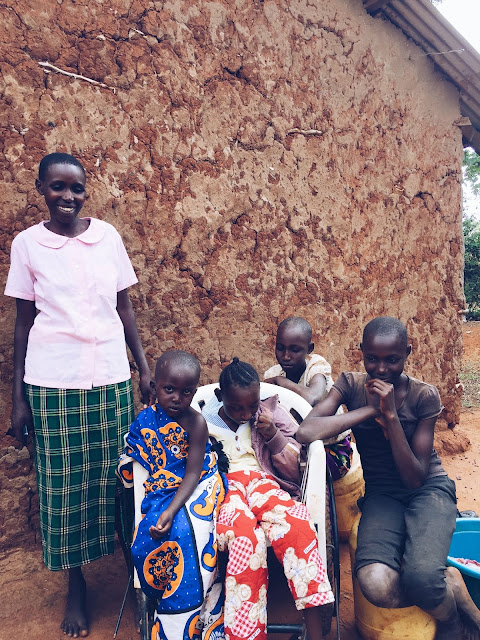 We said our goodbyes and headed back to do one more project before nightfall.

I'd asked Sammy for the names of a few other moms we could help with small business gifts while we were here and she mentioned Consollata, a grandmother who lives on the opposite side of the fence from Precious Kids Center. She'd stopped into PKC a few months ago and asked if her ten grandchildren could go to school there. Sammy was able to accommodate four of them (since the others were too old for the current grade levels at PKC School.)

Phoebe called Consollata Tuesday morning and asked her to come over to talk with us. We offered her a few options for businesses she could easily run to provide the money necessary to feed her family. She chose charcoal. Most families can only purchase a day's worth of charcoal at a time, so giving her two large bags, she's able to sell small portions to neighbors or passersby on the dirt path in front of her home and, hopefully, use part of the money to meet their needs and save the rest to keep the business going.

We made it back to Precious Kids Center about an hour later, just as the charcoal was arriving. The motorcycle driver--weighed down by two huge, heavy bags--graciously drove down the dirt road, past this farm, and placed them outside of the family's door. Sunny, Phoebe and I followed closely behind. 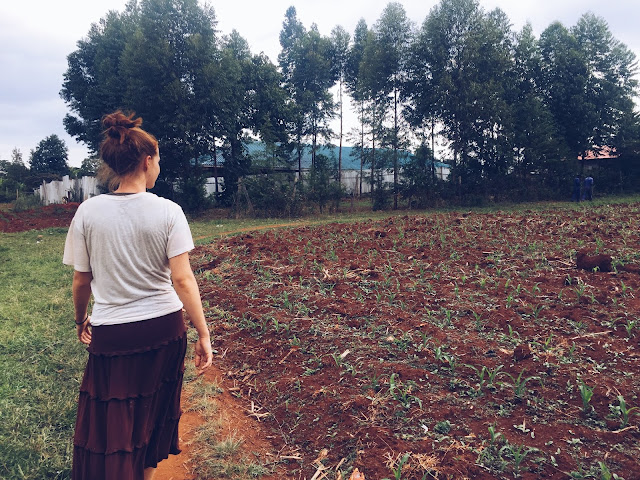 Consollata, her husband and their ten grandchildren 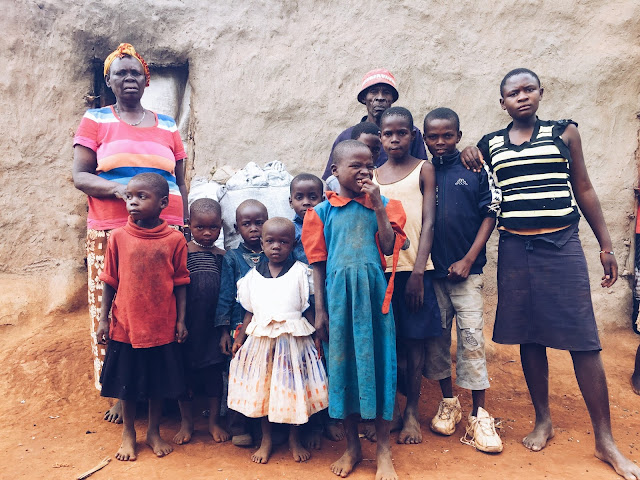 The walk back to Precious Kids is beautiful! 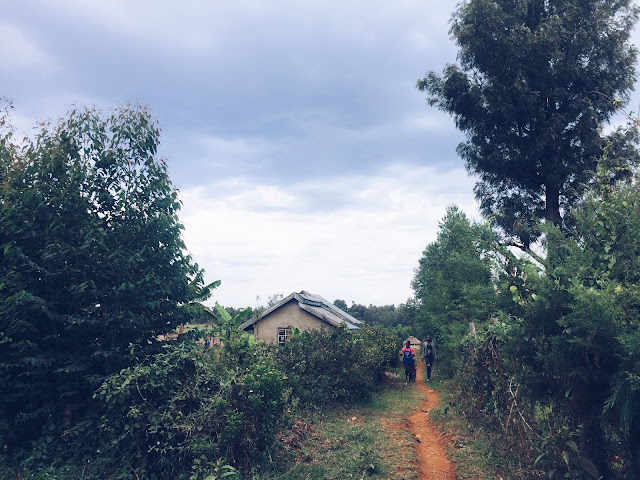 We arrived back at the house just in time for oranges! A giant bowl of oranges being sliced and handed out to the kids--and, of course, they handed us a few slices, too.

To my surprise, the child that was most excited was Lenny. He crawled into the kitchen, grabbed an orange and then slid back to the living room and parked in a corner to gnaw on it. One of the other kids came up and grabbed it, but we got it back for him and he smiled his big Lenny smile of appreciation. (This is a terrible picture, but he was so smiley...and I'd like to remember this moment.) 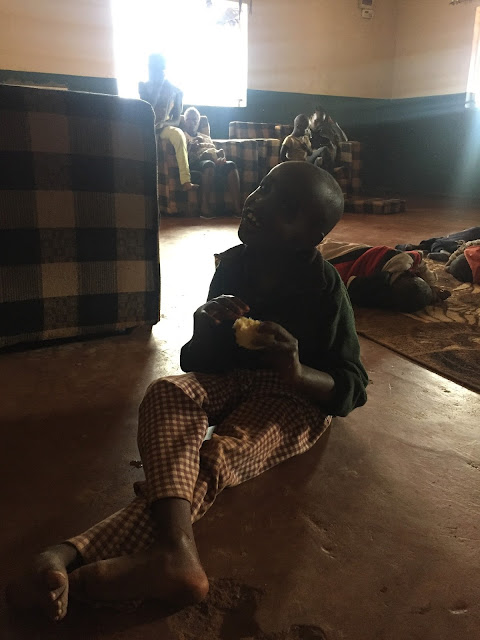 I was the most excited for dinner! Ugali (maize flour) and cabbage is MY FAVORITE. Most of the moms know that, so they were very excited to serve us up two plates! Sunny has been so adventurous with her eating, so even without utensils, she scooped up cabbage and ugali and nearly cleaned her plate! 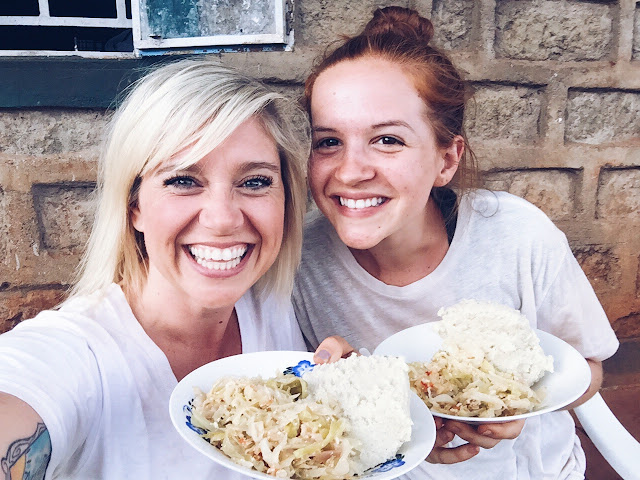 With full bellies and full hearts, we loaded in the van and headed back to the house where we sat and looked through pictures from the day and swapped stories of what we'd experienced in this very full, very fun day.
Posted by Allison at 8:39 AM

What a difference you have made for so many people!! I am so very proud of you and so happy that you're able to help others by doing what you love to do!!