Wednesday morning, I woke up very excited: Mama Zippee and Zippee would be coming to Precious for a visit! (Mama Zippee is on break for a few weeks, so they've gone home to be with the rest of their family just outside of town.)

When we arrived, I saw Zippee hiding in the corner--a little too shy to come right up and say hello. But Mama Zippee was as excited as I, so she jumped up from her green plastic chair and we ran toward each other.

She was as loud and hilarious as ever. She hollered, "ALICE! HOW ARE YOU?! I'M HAPPY TO SEE YOU!" (Her bit is to speak English at the top of her lungs. It gets me--and most of the other house moms--every time.)

We chatted--about families and farms--as much as our limited knowledge of each other's languages would allow and then I set out to find Zippee.

Zippee finally warmed up to me and decided she'd like to take a picture together...but only if Ericka was in it, too. 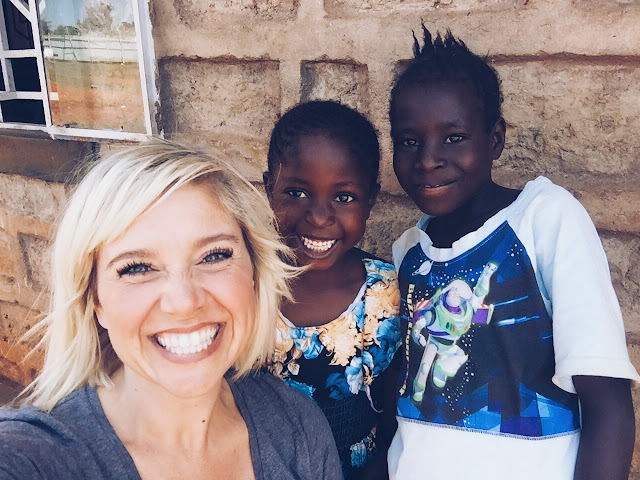 Ericka asked to take one of me and Zippee...not too bad! 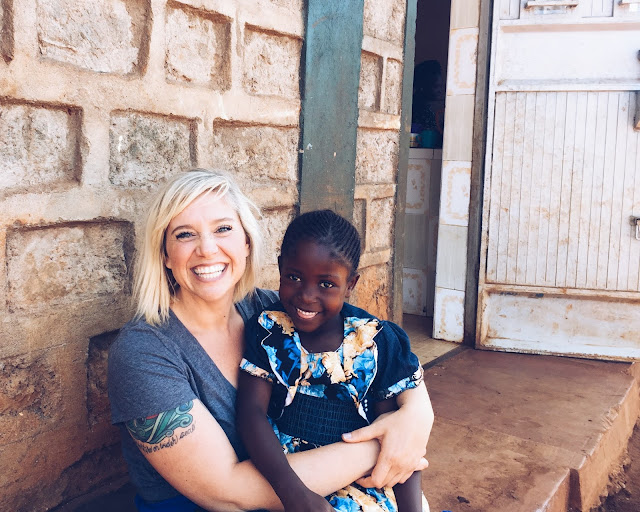 In the meantime, Sunny had a nail painting station just outside the house and was swarmed by tiny hands pointing to the colors they wanted. 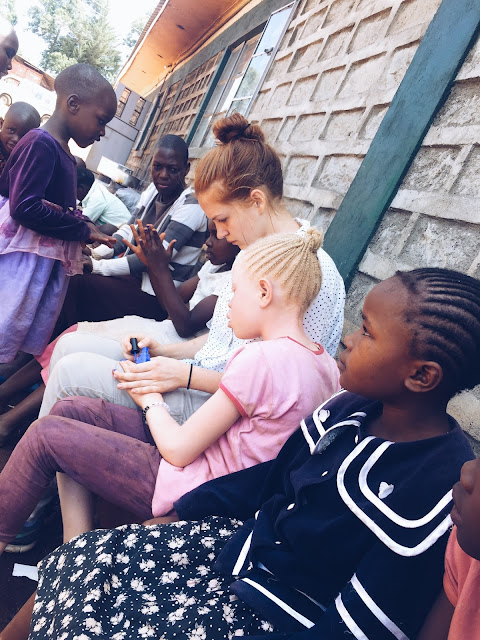 I love this sweet conversation between Favor and Quinta happening just over Sunny's shoulder. Favor communicates using sounds and gestures instead of words, so I can only imagine Quinta listening and knowing, from living together, what Favor was saying. (Also, based on her smile, I'm assuming they're talking about how excited Favor is about having her nails painted.) 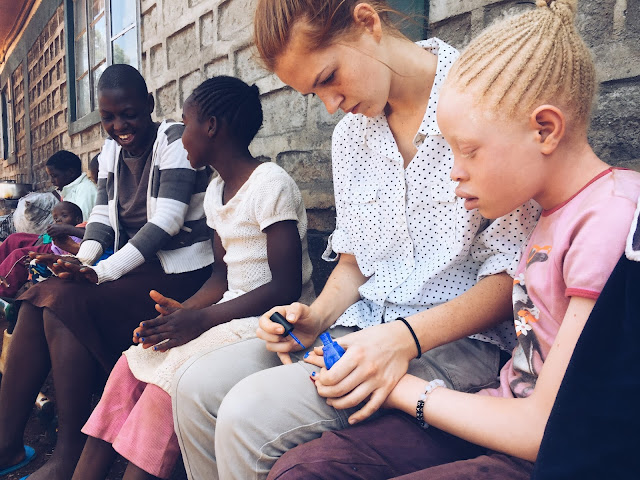 Favor wandered over to show one of the house moms her freshly painted nails, chattering excitedly on her walk across the compound. She sat down, with her hands still so she didn't mess up the paint, but refused to look at the camera. (She was giggling while I took the photo though.) 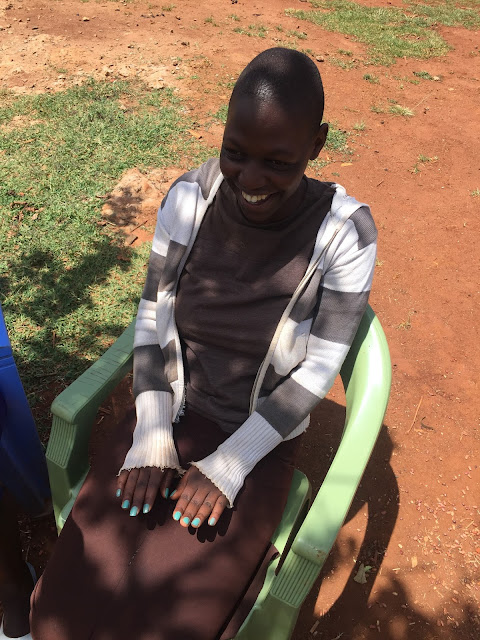 The line can start to feel never-ending...but they're all so excited, how can you refuse? 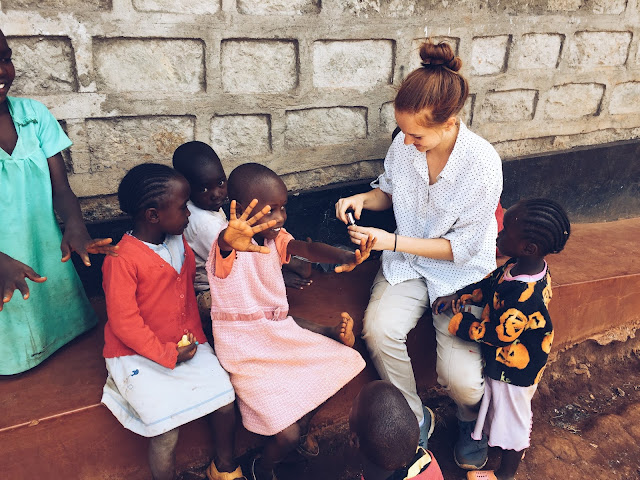 Stumbled upon Isaac straight-chillin. Kid's still got it. 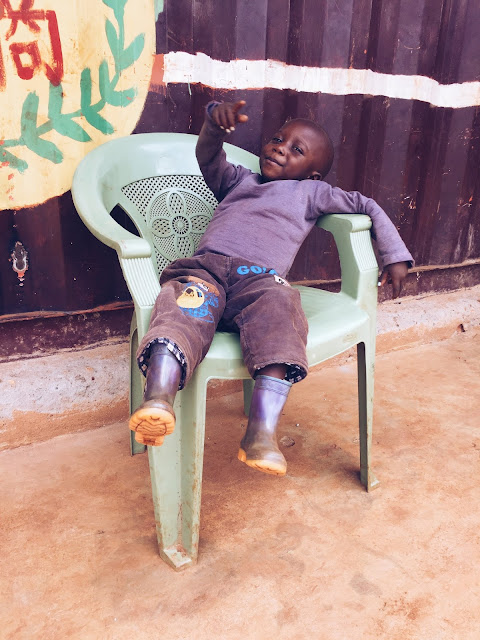 Frank, one of the "big boys" at Precious Kids Center finished the term as #1 in his class. I told him we'd celebrate by getting him something super special. He chose a phone. (Shoulda seen that one coming--what a rookie move on my part!) I talked with Sammy to get her okay and then told Frank we'd go have lunch and then pick up his phone on Wednesday.

He played it so cool...trying so hard not to show just how excited he was. He chose the phone he wanted and watched as they plugged it in to make sure it worked, dusted the screen and added a thin protector...and then smiled just the tiniest bit when they handed him the box.

They were running a special promotion--buy a phone, get a headband, wristband or mousepad. Frank chose a wristband, so the saleswoman said she'd give it to him in front of the stand while they had their photo taken. (Obviously, I took one, too.) 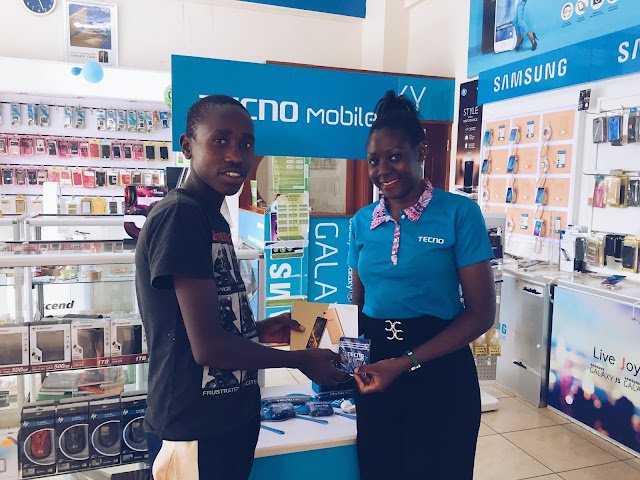 Once we got in the car, I watched Frank push buttons, take photos, test different apps...all with such joy on his face. Now that we weren't in public, I asked to take his picture with his new phone. 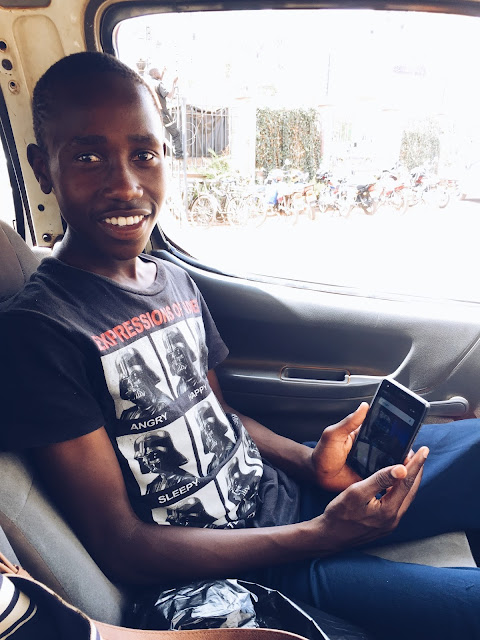 A few days earlier, Frank had asked me to let him drive the car around the compound. With so many small children around--and such uneven ground--I told him it seemed too dangerous. But, on our way home from the store, just as we turned on the last street, I stopped at the bottom of the hill and put the car in park and told Frank it was his turn to drive. Oh man, the smile on his face was HUGE!

He only drove about 1/4 mile, but it brought me back to my mom teaching me to drive in the Target parking lot and yelling, "BRAKE! BRAKE!" at me the whole time because all I could think for that 1/4 mile was, "Too fast! Too fast!" even though he was driving a totally appropriate speed on a completely empty dirt road. 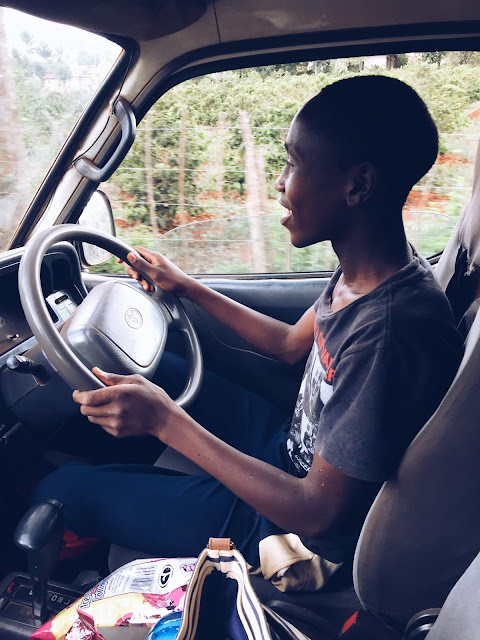 While we were in town, we'd also picked up some gifts for the families we'd be visiting on Thursday and Friday. (More on that later.) While we were in the shop, we grabbed a few bags of lollipops for the kids (and an extra bag to throw in the glove compartment for kids we met along the way--siblings or neighbors during home visits. An inexpensive, but great trick I picked up from Sammy.)

Needless to say, kids were very excited about the lollipops. 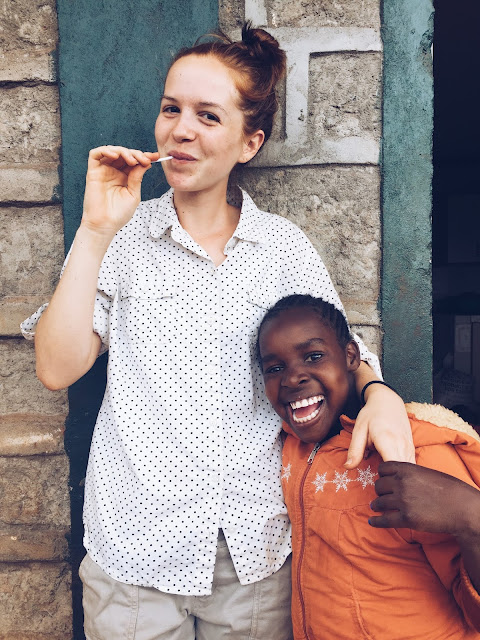 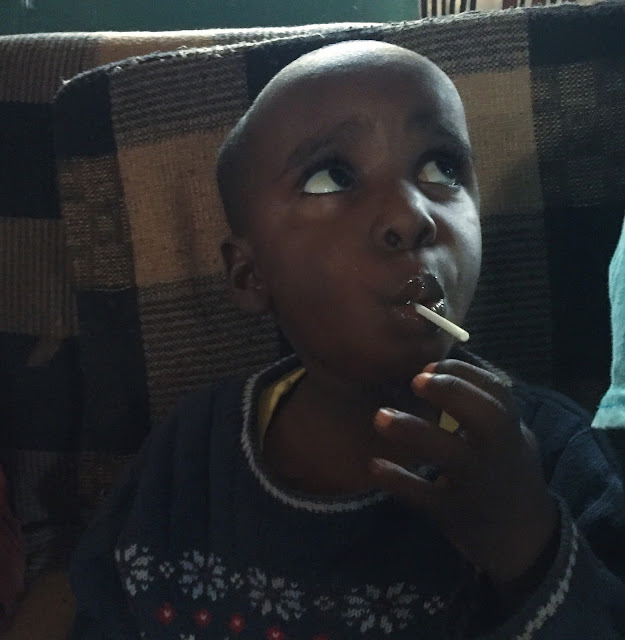 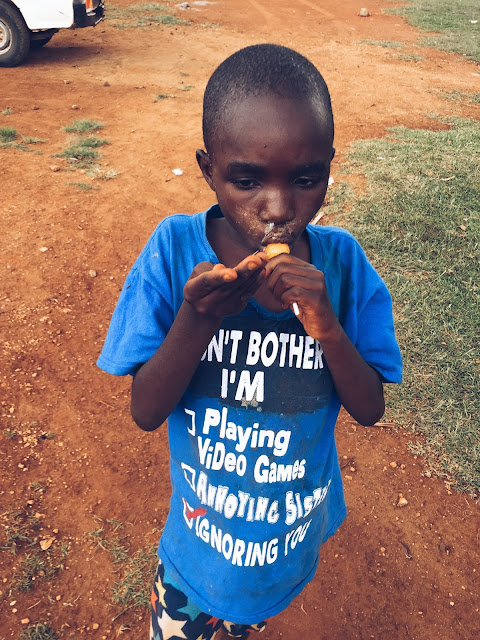 Even Imani!
Anet (her mother) said this was her first lollipop and was excited to have a photo taken of the moment 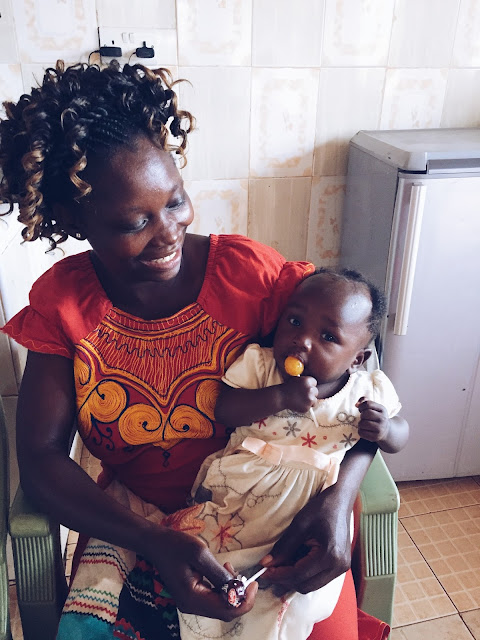 Wilson is a teenage boy who was dropped off at the Precious Kids Center compound about five months ago by another organization in town. Given the circumstances, (being abandoned, for at least the second time in his life) it's understandable that he's still a bit stand-offish. He has cerebral palsy which primarily effects his left-side and a bit of his enunciation, but it doesn't slow him down at all. When we took the big kids to the house earlier in the week, he grabbed my hand and said, "Me too?!" and then headed out to the car.

Wednesday afternoon, he joined us for lunch in town. When we got home, he walked over to me as I was sitting with Suzie (my favorite way to end the day) and asked to take a picture together. How could I resist such a sweet request?! 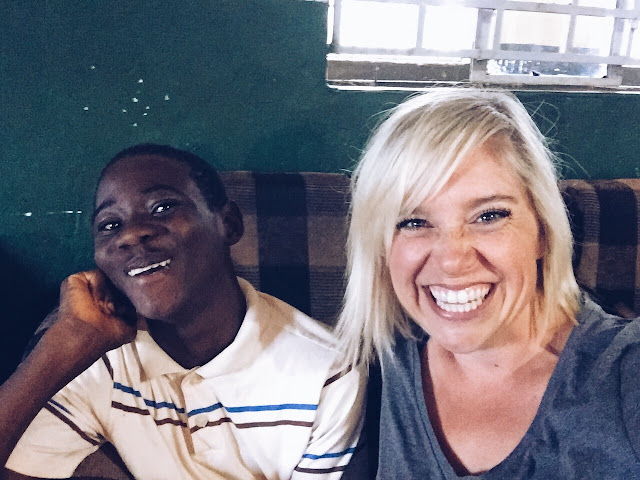 On the way home from Precious Kids each night, Sunny has been asking great questions--about Kenyan culture or politics, about the education system or mental health--she's so smart and wants to understand all that she can about various pieces of Kenyan life. I do my best to answer based on what I've learned over the years, but often she spends an hour googling things once we're home or asks Phoebe or the older kids the following day. It's been so fun learning from her as she learns from others!

I'm so grateful for my time here...and can't believe there is still more to come! What a joy--and what an incredible gift--to spend nearly two weeks in this town I love so much.
Posted by Allison at 12:28 AM