Most mornings we're not sure what the day will hold, but nearly everyday--without fail--there's a great story to tell. And last Monday was a day full of stories.

We arrived to the kid's house to a handful of visitors!

The first was Mama Dan. As a single mother of six, Evelyn has struggled to make ends meet. A few years ago, in the midst of a food distribution in her community, she met Sammy, who offered to let one of her sons, Dan, who has severe autism and does not speak or walk, live at Precious Kids Center where he is loved and well-cared for.

Evelyn makes the one hour round-trip journey to visit Dan about once a month. On this morning, we had asked her to make the trip so, while sitting with her son as she normally does, we could also surprise her with seeds for her very own farm. 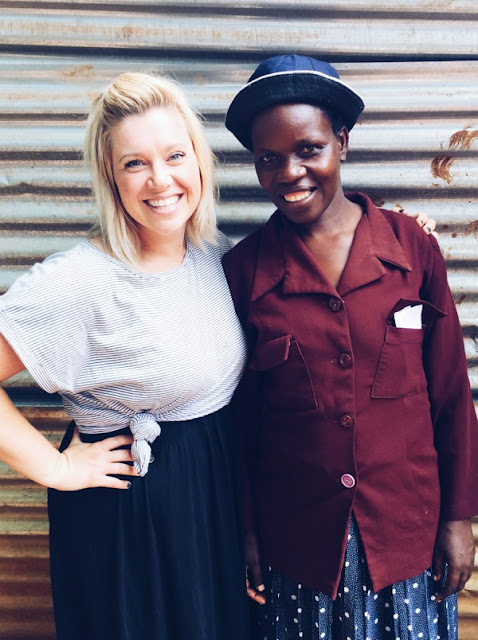 She was so excited that, when I asked if I could take her photo, she also asked me to take one of the two of us together. And then one of her with Sammy, one of her with her son, and one of her son alone. She is so kind and was so thankful. She told me about the quality of the seeds she'd been given and how well they would grow in her area. I am excited to make future visits out to her home {after the rainy season, when that community is more accessible by car} to see the progress of the crops. 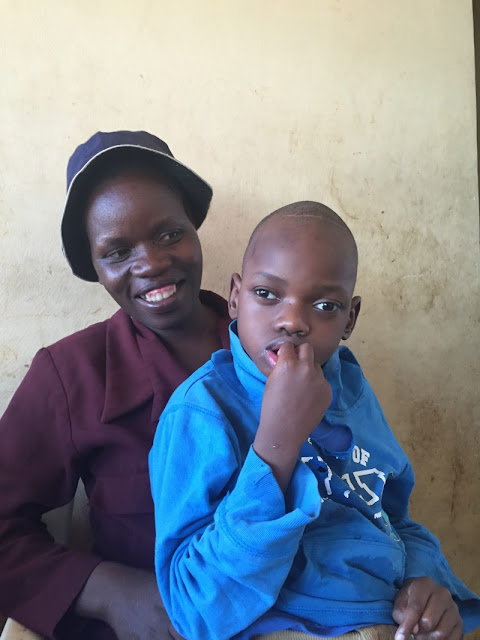 The second visitor was Knight. She is Trinah's step-mother. Trinah has cerebral palsy, so the right side of her body is weaker than her left. Trinah's dad, Peter, has been battling a disease for as long as I've known him {going on ten years.} With his health issues, it was increasingly more difficult for him to provide Trinah with the care she needs, so Trinah moved in to Precious Kids Center. Peter and Knight visit often and, many times, take Trinah home to stay with them for a weekend.

This morning, we had invited them to come talk about Knight's dream of opening a beauty salon. She has styled Trinah's hair on previous visits and it is always adorable. {In this photo, Trinah's hair is done-up like a Dr Seuss character because she is awaiting her turn with the hairstylist.} 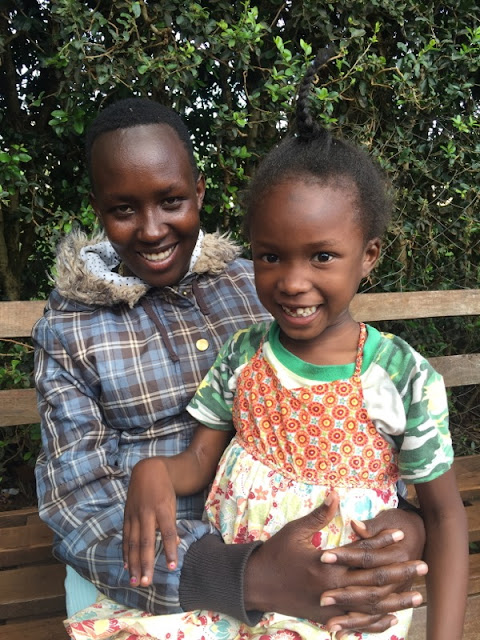 When we talked a week ago, we asked Knight to put together a list of what she would need...and she came prepared! A full page {front and back!} of everything needed for her dream salon. From big items--blow dryers and mirrors--to small--combs and basins--she didn't miss a thing!

A few days later, I purchased a brand new blow dryer as a giant step toward this dream. {It can take some families years to save up enough money to purchase a blow-dryer--which is all a stylist needs to begin, since customers come with their own combs, rubber bands, weaves, or beads.} As clients come in, Knight can save up the profits and slowly purchase the additional items to build up her stock and, one day, have a full-fledged salon.

The start of two businesses within the first hour of the day! And there was so much more to come!

In the midst of all of the photos taken for Mama Dan, Zablon asked me to please take a photo with his 'doll'. He's very cute, but that doll is terrifying. 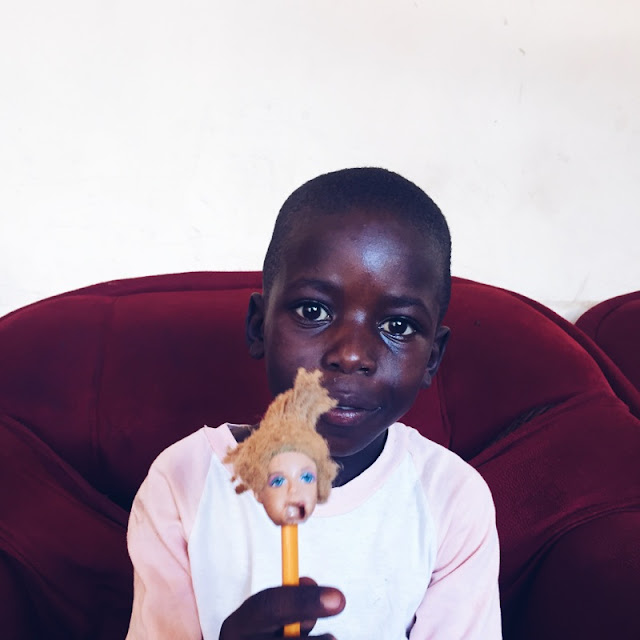 As a special treat to Bre, we made a visit to her favorite lunch spot in town: Lillian's! A Kitale favorite for teams of college students {eating on a college student's budget} this restaurant has huge portions at very low costs. We ate our fill and then decided to surprise the group of street boys who hang around out front with lunch as well. 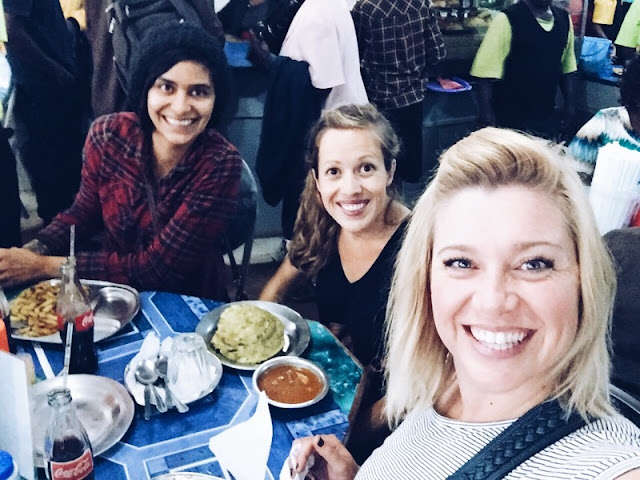 Since Sammy speaks fluent Swahili, knows nearly every street boy in town by name, and is a wiz at crowd-control, it's always best to let her distribute the food. The bags were heavy {and hot!} so one of the employees came out to help carry them. Even he marveled at how well Sammy navigated the chaos of these hungry boys! 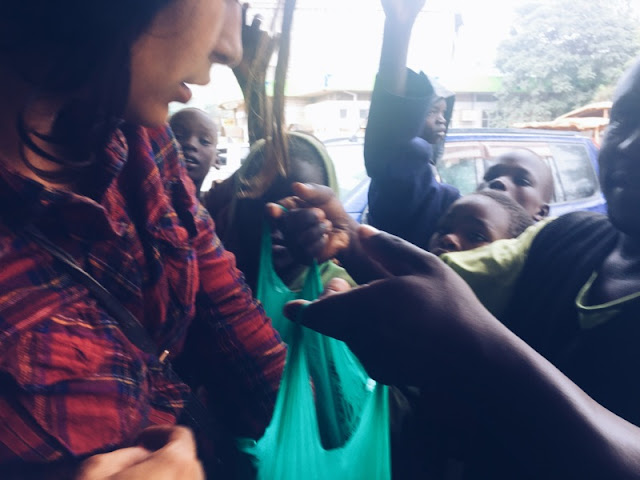 Dan and David were so grateful for their ugali and beef stew. 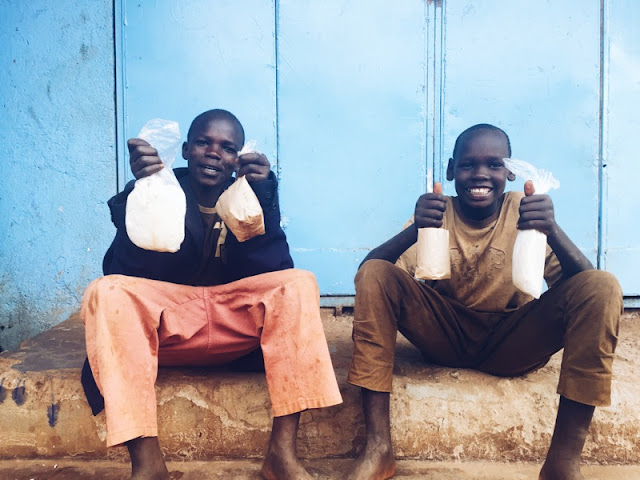 One more stop during our trip to town: clothes for a few kids who are new to the center or had recently outgrown {or worn through} all of their other outfits.

While we were searching for affordable skirts, a shop-owner who knows Sammy well, stopped her to make a deal on jackets. Sammy turned to us and said, "Well, this price is too good to pass up! I'll be right back!" A few minutes later, she walked up two giant bags full of about 30 new coats.

We returned to the house with all of the new clothes, which meant there was a very cute fashion show in our future. Bre and I sat out back on the mat, with a few of the smaller kids, and watched as the coats were distributed. 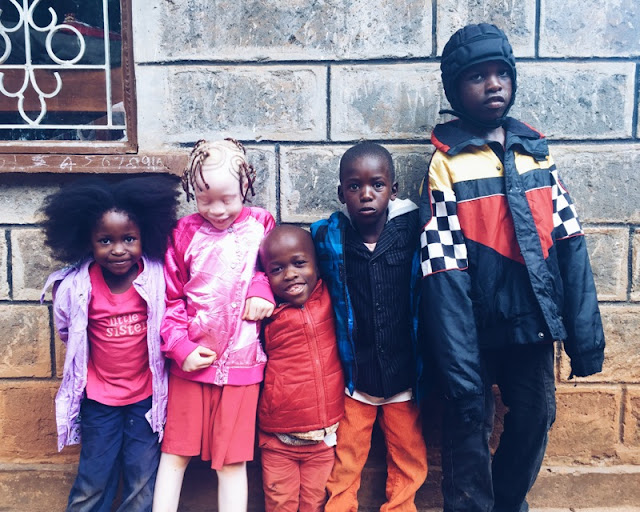 This began as a photo with three kids and quickly escalated! 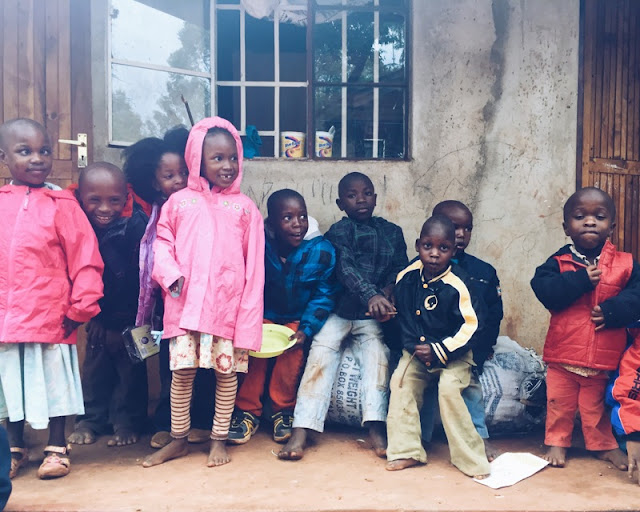 Bram and Male in their fancy new coats! 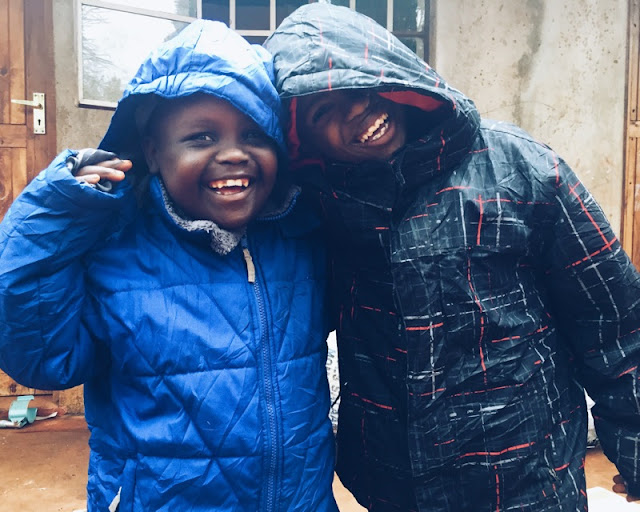 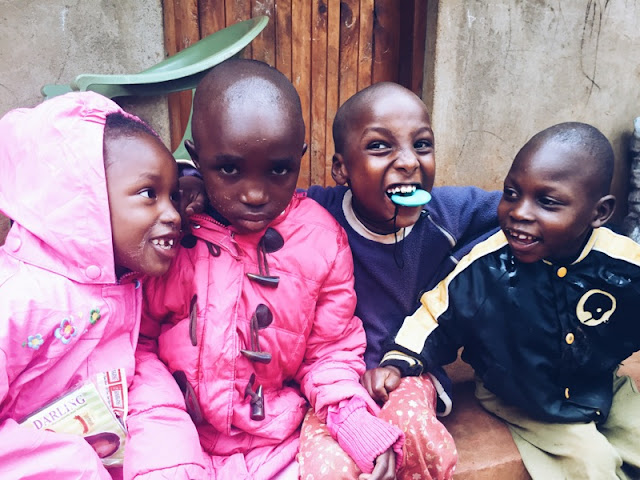 One-by-one, the kids piled on top of Bre and Lavender, who had been quietly chatting while the madness unfolded around them! 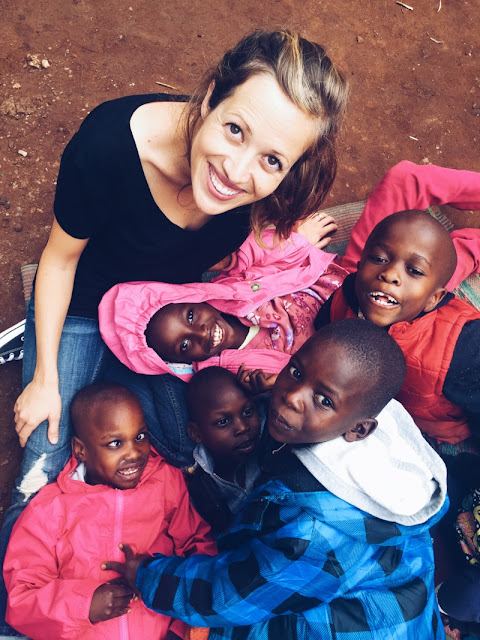 And, with that, we headed home to make dinner and rest up a bit.

There is always a story to be told at the end of a day, but rarely are there so many photos to go along with it. I am so glad to have these bright, colorful memories of the way God has allowed us to be part of the life-changes He's writing in this town. {And I'm really looking forward to surprising these Mamas and children with prints of their photos sometime soon!}
Posted by Allison at 6:00 AM