The Weekend Macaulay Culkin And I Had Everyone In Stitches

It's been a little while since I updated you on the goings-on around here...and for good reason. On September 1st, all of the kids went back to school, which meant lots of shopping runs for supplies and replacement items--and marking each uniform with the initials of the owner. On the previous Friday afternoon, one of the women who does all of the laundry came in and said, "We have a job for you."

She took my hand and brought me to the back bedroom where she pointed to a crib-full of uniforms and asked me to mark each one. She then sent the boys in one-by-one to show me which items belonged to them. I marked each with a sharpie, then stacked them by child--trying to make a separate stack of items that also needed new buttons or a hole (pocket, knee, elbow or crotch!) stitched up--then bundled them in stacks with the uniform ties and made several trips out to the car to bring them home.

Oh, and they needed all of these ready to go by Monday afternoon. 48 hours?! No sweat!

After a few attempts, I figured out how and where each item should be labeled (to avoid wear) and stitched letters as quickly as I could. I brought a large bag of clothes with me wherever I went all weekend. I stitched all day Saturday, including while we watched Home Alone that night.

I have to say, if I could find a job where I just watch Home Alone with rooms full of kids that have never seen it before--that would be the best job ever. They laughed so hard--so loud--it was adorable! 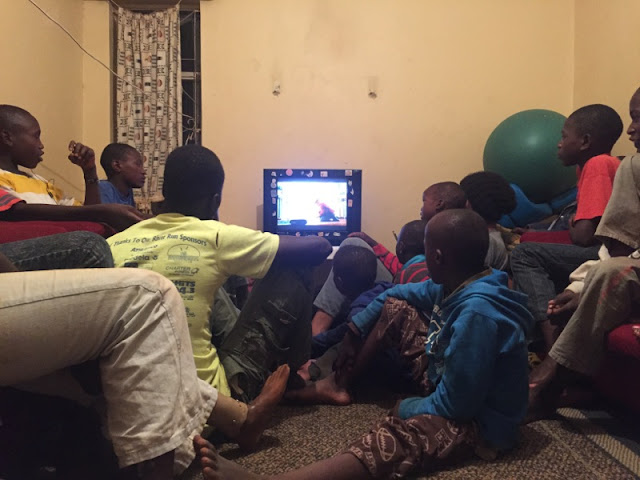 Linah had been wrestling with some self-image issues that week, for some reason, part of my response was to give her a make-over. So, before I continued my project, I spent a few minutes with Linah. (I'm aware that this is a little backward, but she LOVED it.) 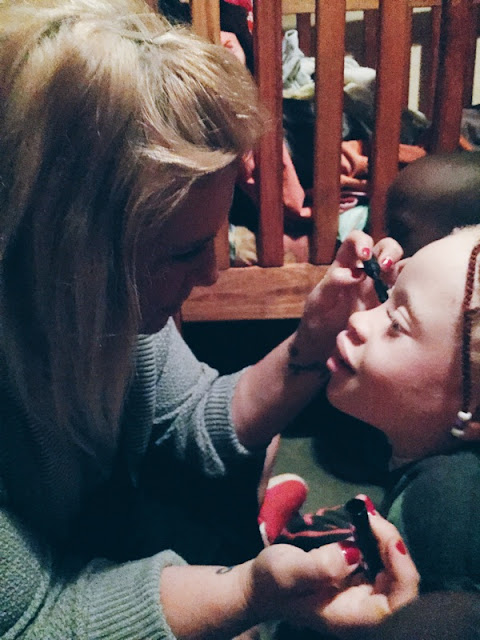 (She refused to put the red lipstick on until I did too.) 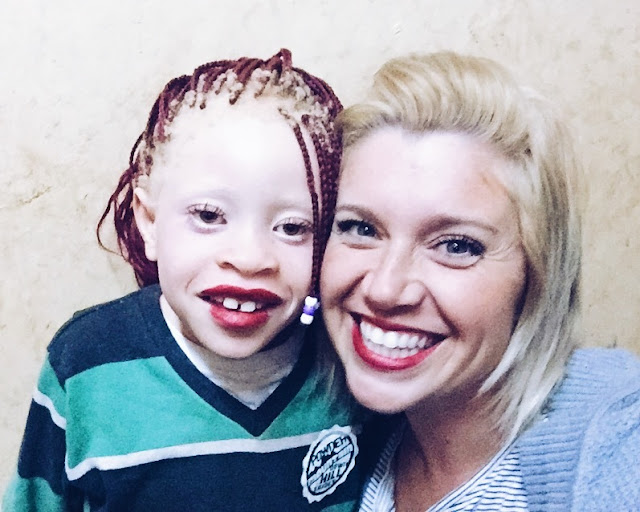 While I sewed and the kids watched Home Alone, Sammy took Suzie in to calm down--and they both fell asleep. 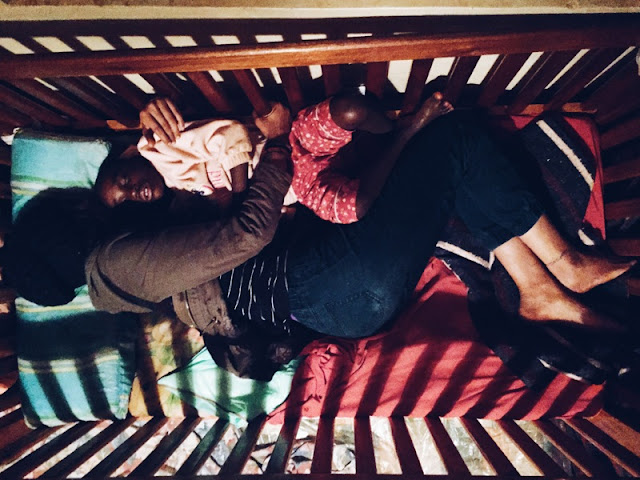 Sunday morning, Sammy ran a ton of back-to-school errands while I continued my assignment. It was much slower going with adorable little interruptions like this. But. Come Monday morning, it was finished! Here's about 90% of the clothes that were given initials, new buttons, and quite a bit of mending. (There were also towels, socks, sweaters, and the brand new uniform pieces that didn't come in until a few days later.) 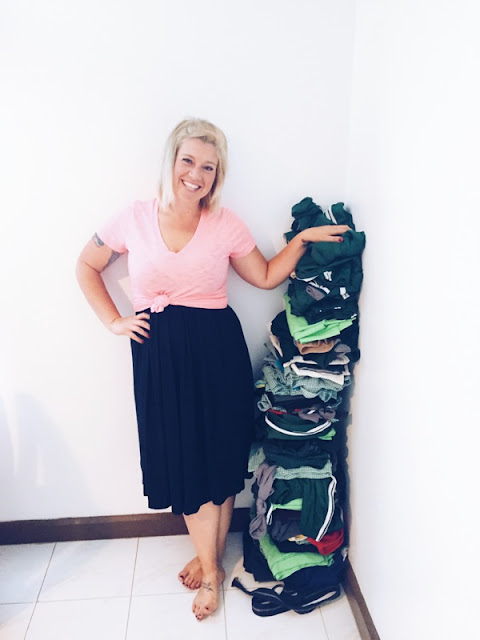 That afternoon, while Sammy helped pack-up everyone's school bags, I sat in a chair outside as they brought me pieces from their bags that also (or still) needed some love. I stitched as quickly as I could: lots of new buttons, a few mended knees, etc. so they could put them on or back in their bags and load up in the van. 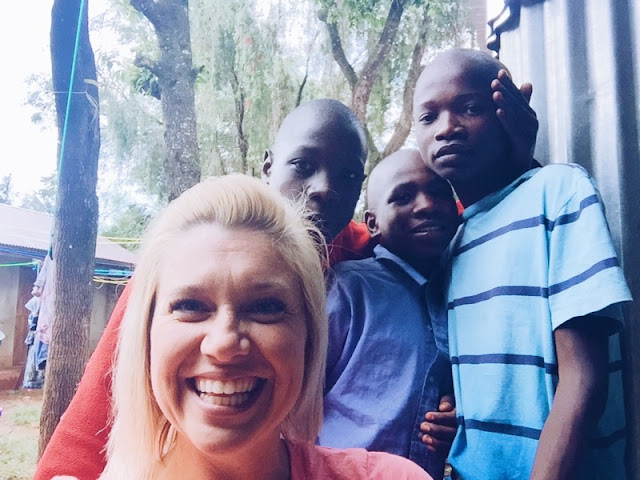 All of the work was totally worth it! Look how nice they look for their first day! With all of the items unloaded in to the dorm, we paused for one last picture with the whole crew and Sammy. 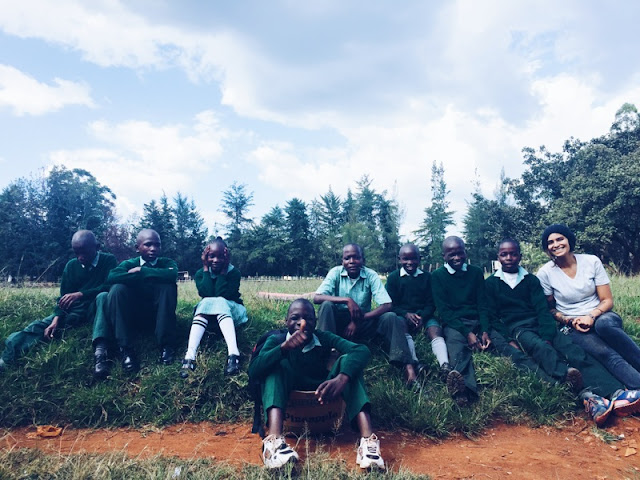 There were a few more pieces waiting for me at home--the day scholars didn't start until the next day. And then, of course, there were the brand new uniforms for each of the kids at Precious Kids School.

I've been carrying scissors and a needle and thread in my purse for the last week, always prepared to mend sweaters and fix dresses. Each morning, I find three or four new pieces waiting for me at the kids house. And my favorite is when a kid passes the window and sees me sewing on the couch, he or she comes inside and points to the part of their uniform that needs fixing. They'll hand sweaters to me or bring the dress back the next day. It's a really easy, fun (and non-stop!) way for me to help around the center.
Posted by Allison at 12:57 PM

Always thinking of you and praying for you and the kids! You're such a blessing and SUCH a help for them! Thank you!

I love following your adventures. Your camera captures more than just typical moments of your day, it seems to so somehow show us your compassionate and passionate heart. I'm really thankful for our 'friendship'. Anytime I see or hear of a life lived well, I'm inspired to be better and work harder and sacrifice and open myself up more to the opportunities and possibilities that come my way. Thank you being you and doing what you do...