Night And Day...We're Having Fun

I have a post on Human Trafficking (What I Learned From A 90-Page United Nations Document) coming soon, so how about one more lighter--mostly photos--post before that?

Everyday I think I have a new "favorite" around here. I mean, Suzie will always be #1 in my heart, obviously, but each day there is another that makes me think, "How have I not realized how rad this kid is?!" Over the last few weeks, Bramwel has stood out to me as one of the greats. I need to post another video of his dance skills because dangit they are entertaining! 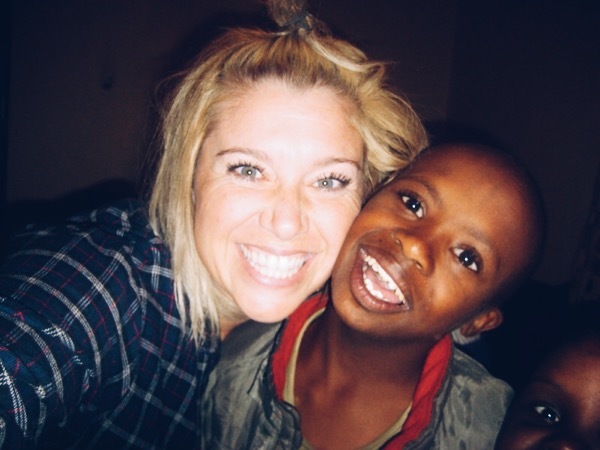 We've been eating dinner at the kid's house pretty much every night, which is super fun and also a nice gift to us--not having to plan for or cook food! At the end of our meal (which is, usually a few hours after the kids have eaten) there are always a few that have their eyes on our leftovers. Moses has perched next to me every night for nearly two weeks, waiting for me to finish and then diving in to the last few bites. 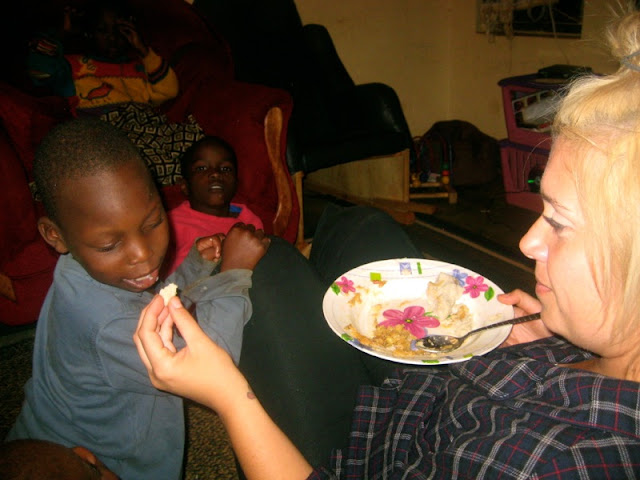 The digital camera has been another popular item. Typically I get home and find 200 photos of whatever was directly in front of the photographer--at various angles and with varying amounts of zoom--thankfully, Lillian seems to be perfecting her selfie skills, so I came home to about 30 shots like this--with various children next to her making a variety of ridiculous faces. 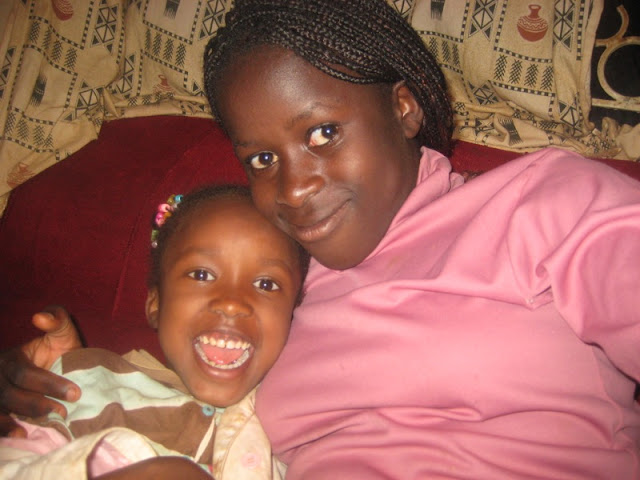 One afternoon, as I sat stitching away, Manu was brought in from class and sat on the couch. One of the house moms gave him some medicine and he slept for a while. As soon as break began, he popped up in to window and watched all of the chaos unfold. Even sick, he didn't want to miss a moment. 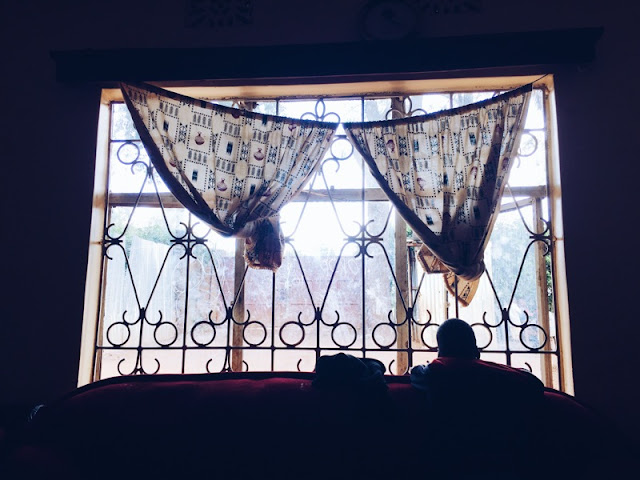 That same morning, surrounded by four empty chairs, Celinah and Maureen chose to share my small chair. They watched each stitch and asked questions about each item's owner, where I learned to sew, and, oddly enough, my mother's name and whether she had any plans to visit. 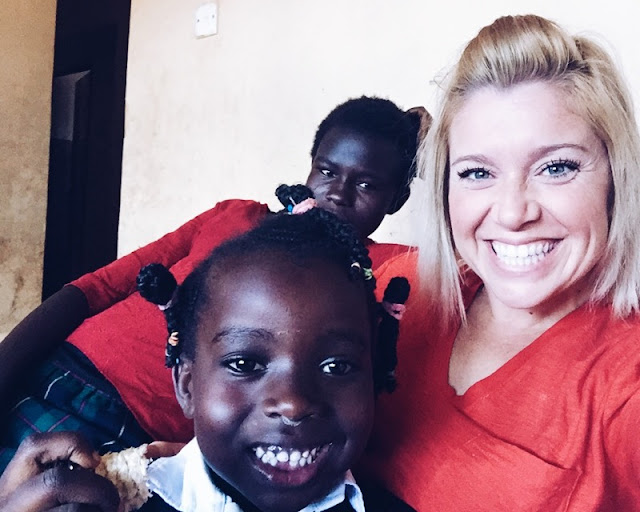 After lunch, as the living room filled with children, I put the sewing away and picked up Japheth. He is adorable and so happy. He smiles and claps and shakes his head and kicks his feet. It took several pictures to get one that wasn't just a blurry face from all of the excited wriggling. He's another that has quickly climbed the ranks of favorites. 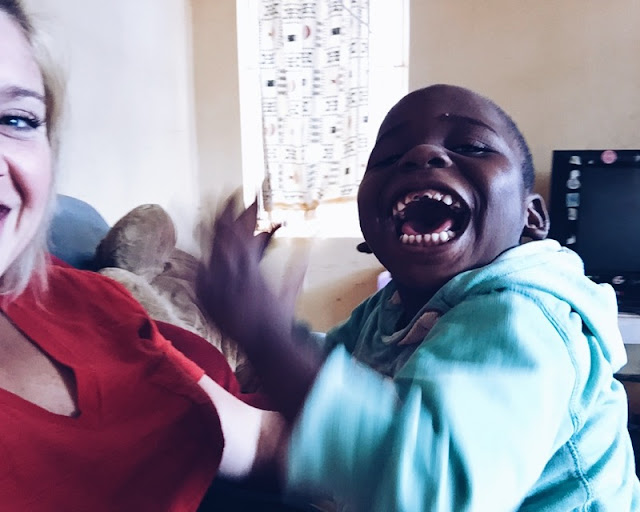 The following morning, I went to drop something in the office and, on my way back to the house, was caught by Christine and Isaac. I quickly pulled out my phone and revealed the wonders of the front-facing camera. Isaac's face shows you how much he loved it! 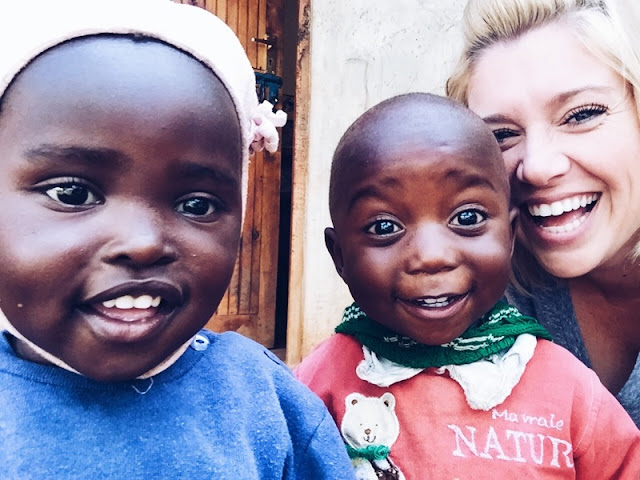 He kept pointing and saying, "Alice!" 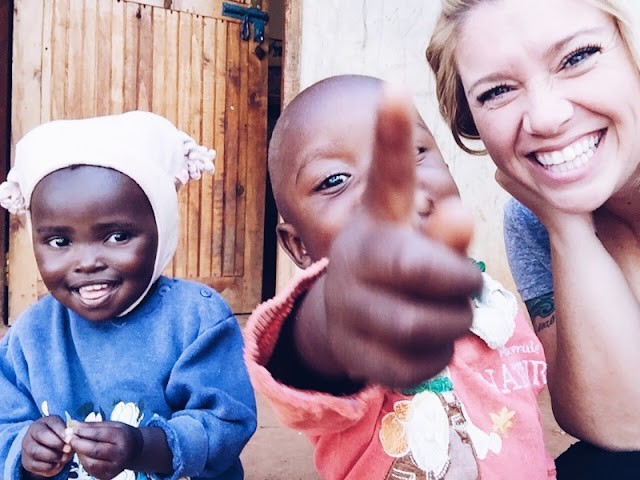 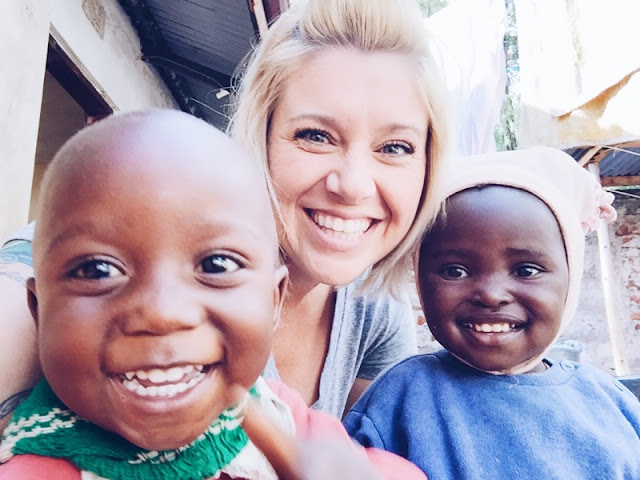 That afternoon, there was a crazy rainstorm. Though it rains nearly every day around 3 or 4, this particular day brought a full-on poltergeist-style thunder and lightening storm. It was so loud and kept getting closer and closer. (Of course, I explained the Poltergeist counting system to Sammy.)

The women who work hard on the laundry all day long brought their lunches in to the kitchen to wait out the rain. From left to right: Mama Isaac, Mama Shiko, and Mama Kevin. (In Kenyan culture, a mother is referred to by the name of her firstborn.) 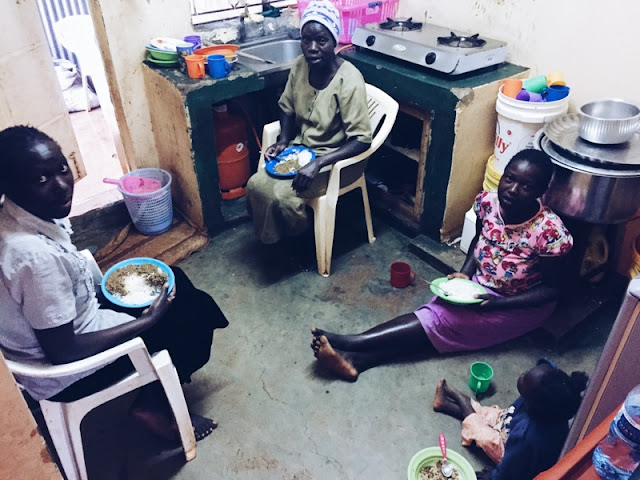 Christine did not enjoy the sound of the thunder. 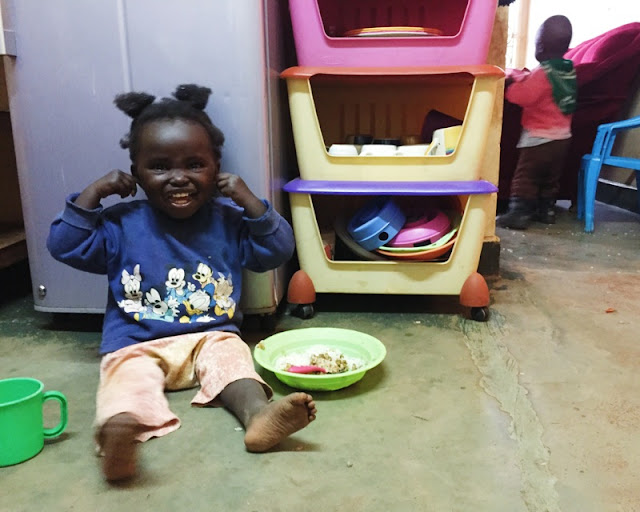 Moses was also a little concerned about the noise-level, so he curled up on my lap for a few minutes. 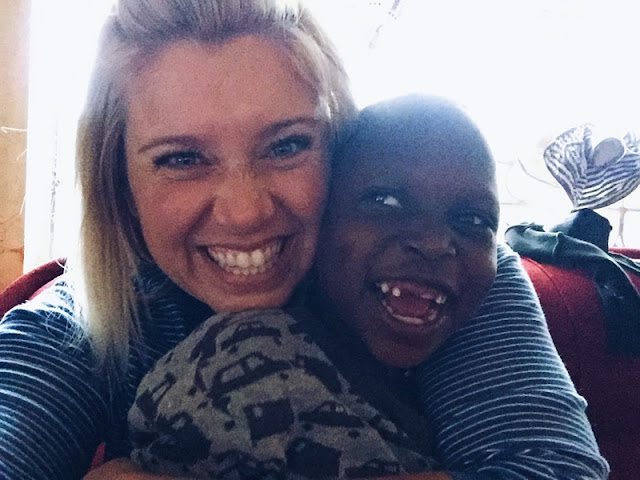 Not to be outdone, Suzie used that as her moment to give me a giant, semi-open mouthed kiss on my cheek. 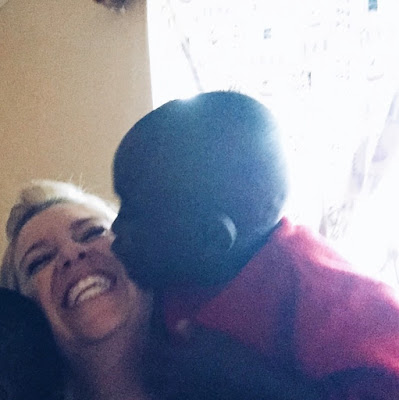 One morning, Mama Maureen (Anna) came in to the living room and asked if I'd like to meet her dad. He had been bitten by a dog and was waiting out front for his daughter to escort him to the hospital for stitches. Not really reading the moment correctly (I didn't know about the dog bite at the time--I thought he was just here for a visit) I didn't want to miss a shot of three generations! Mama Mo, Maureen, and her grandfather. Since Mo loves to hear stories and see photos of my grandpa, it was so special to meet hers! 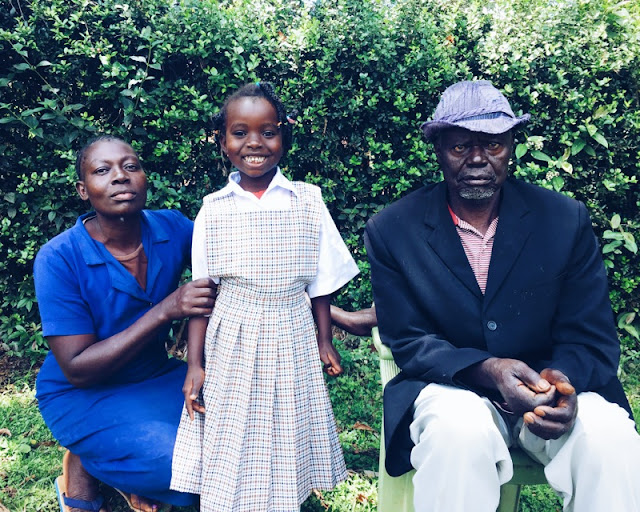 The 90's adventures of Linah's hair continue. When she walked in this afternoon, I had to stop myself from chuckling. (Well, at least until we left!) I snapped a quick picture of her and Sammy and, later, found a reference photo for the look she must have been going for. 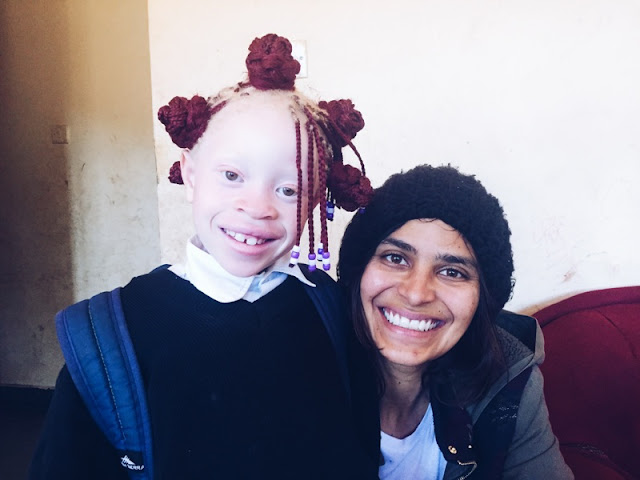 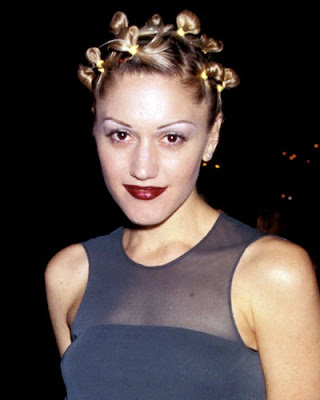 On Saturday morning, I was surprised by a visit from Dorcas. She is staying with a family a few doors down from Precious Kids Center and they had asked to meet me! So she came over to show me which was the right house. The family is wonderful! They own land at the base of Mount Kenya on which they grow coffee. He also owns a guest house in town and is going to put me in touch with an organization that holds recurring educational seminars for prostitutes. It was so great to see that she is being well-taken care of and looked after as she finishes secondary school and moves toward her dream of becoming a doctor. 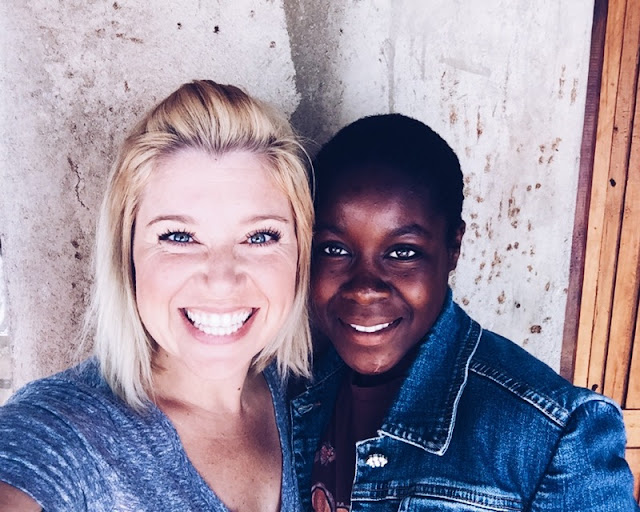 One day, after I showered, I realized that my at-home haircut had grown-out enough to be able to wear my bangs down. I walked in to the kids house for dinner and Maureen burst out laughing. All night, anytime she looked at me, she would laugh--once falling straight to the floor. She finally told me it was good, not bad, but also funny. 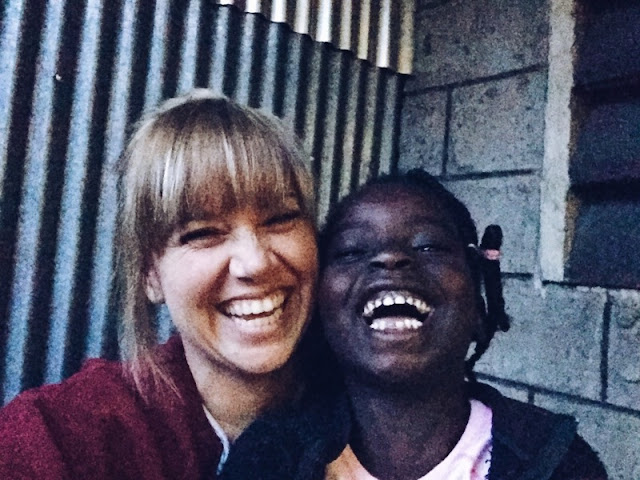 And, a few nights later, I was caught taking a group shot with three children all leaning against me for support--and I was crouched on my tiptoes, which made the shot tricky (and maybe even a little impressive?!) 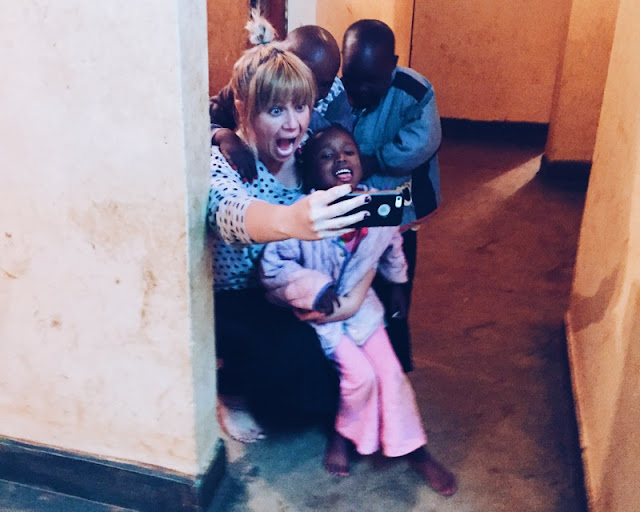 I am impressed with OH so much of this! Cute little faces, strong tip toes, amazing hair dos--and your love and smile the whole way through!!
Tell them my name is JuJu. They will like that!

What a wonderful moments