Visitors and Vomit (Not Mine): A Very Eventful Weekend

So how about a race through our last few days? It involved quite a bit of bodily fluids, so I apologize in advance for that.

Anytime we are in town, Sammy's van is a magnet for street kids. They all know Sammy and she knows most of them by name. This little guy, Otieno, comes to the window each time to say hello. He begins on her side of the van and, as she runs an errand, he comes over to my window to chat. It wasn't long before I ran out of my go-to questions in Swahili (what's your name? how old are you? what did you do today? what are the names of your friends?) and by day four, we just sat and smiled at each other. (I'm learning new phrases every day, so eventually that awkward silence will be non-existent.) 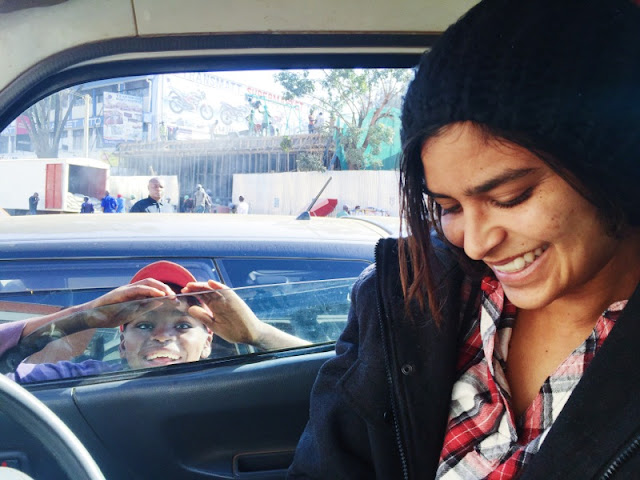 One morning, when we pulled in to the Centre, it was totally quiet. (Imagine a compound of 37 house kids and over 100 school kids...silence is rare.) But that morning, everyone was in class. No one was crying, or in physical therapy, the television was at a normal volume...even Willie was practicing writing his numbers in a book outside of the classroom. (Instead of his normal, hammering antics!) 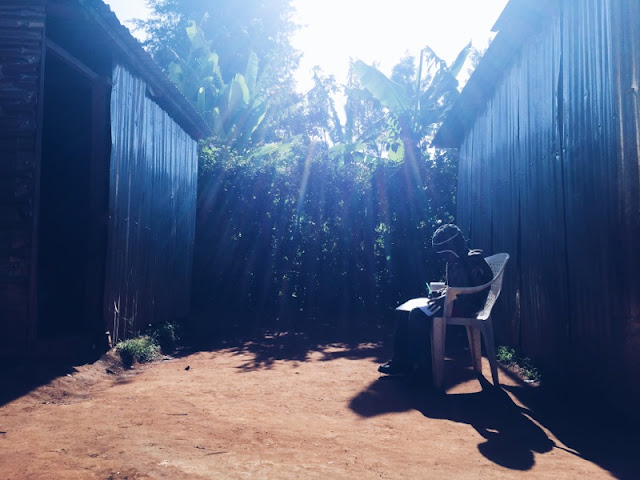 That same afternoon, a team from Kansas came to visit. They jumped right in: learning names, holding kids, teaching Bible verses and songs--near the end of their visit, they brought a guitar out of their van and played a few worship songs. As you can see, the kids absolutely loved it...this crowd couldn't get close enough to the music. 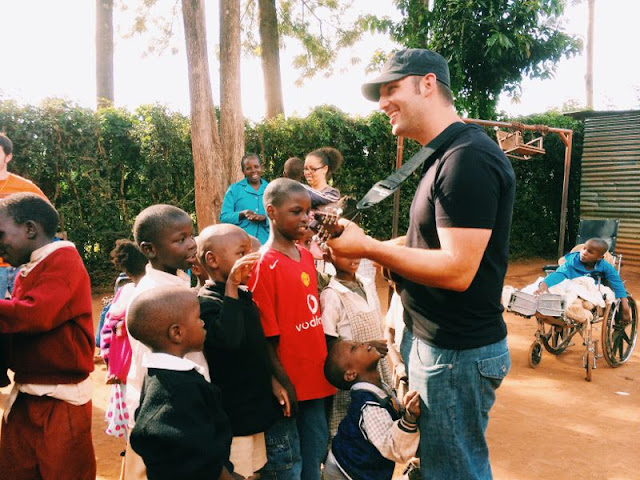 This week has also included a few firsts for me:

I drove a car on the other side of the road--dirt roads to be precise--and I only accidentally honked the horn and scared the heck out of a group of school kids passing by twice! 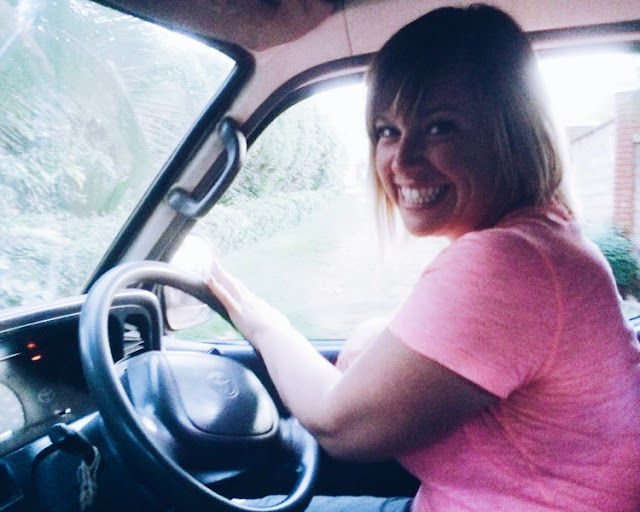 The next morning, I learned to sort beans...taking out the dirt, rocks, sticks, bugs and infested beans so we only cook the good ones. (I was really proud of myself, until the house moms asked me to please throw my discarded beans on to a tarp so they could sort through them a second time...I guess my standard of beans is a little too high.) 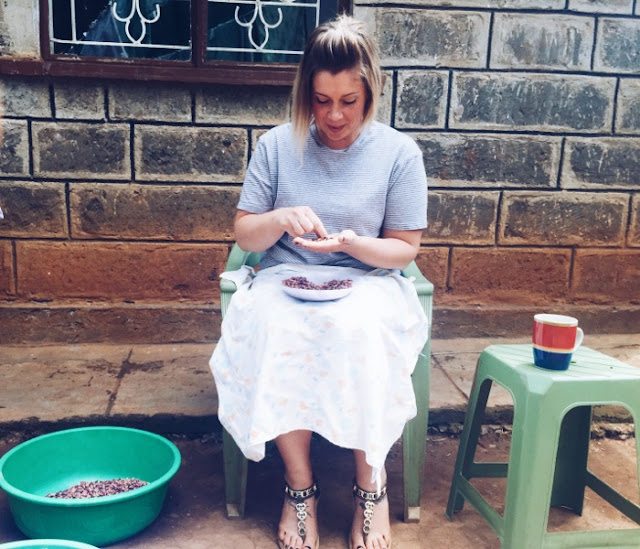 We had a few afternoons like this: a mat spread out in the backyard and kids laying everywhere..."reading" books (books in English for kids too young to read even Swahili), coloring, sleeping, making bows and arrows...it was so fun. 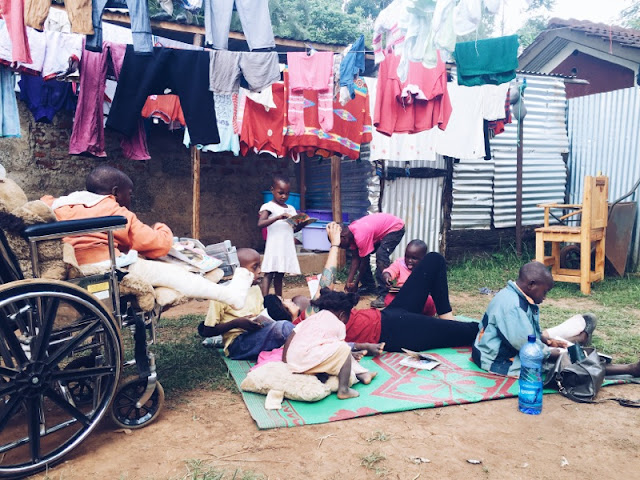 Every-so-often the girls take out their braids and a woman comes to the house to redo them. In-between hairstyles, their hair is the most glorious, fluffy poof. And I took dozens of photos of each girl while it looked that way. Here's Christine...the sweetest, most photogenic little girl. (I still believe this even after she peed in my lap on Friday!) Her mother is one of the women who does laundry for the Centre, so her brother and sisters attend the school and she runs around all day (since she's still a little too young for school.) Her African dress that afternoon was made up of the most beautiful colors and had ruffly sleeves and buttons down the back...I want to try to have one made in my size. 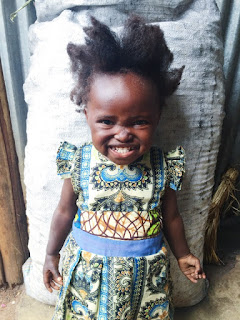 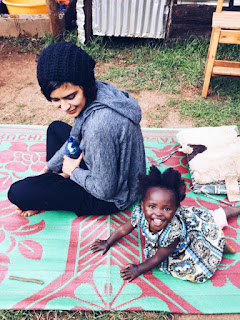 On Saturday night, we came back after running errands (for our guest who was arriving on Sunday morning--more on that later) and found a craft night going on in the backyard. Discarded boxes, a few pair of scissors, to which Sammy added a box of crayons...and each kid was trying his or her hardest to make a mask.

Japheth's creativity was a few steps above mine...he even pulled some strands from the charcoal sack and made a tie for the back! 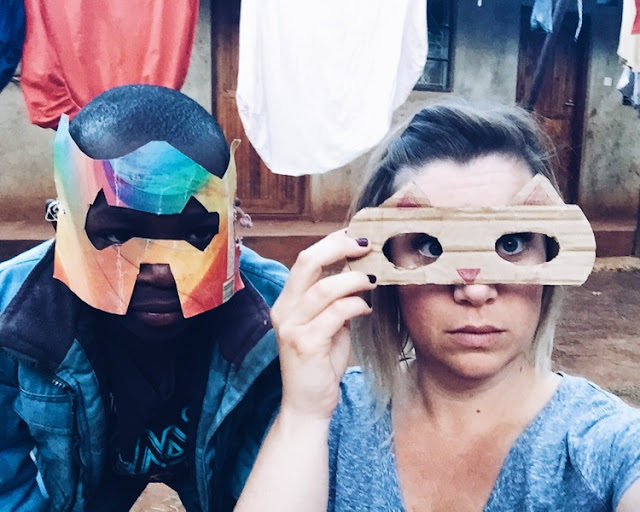 Eric David, Sammy and Male's were also several steps above mine. Way more colorful and robotic. 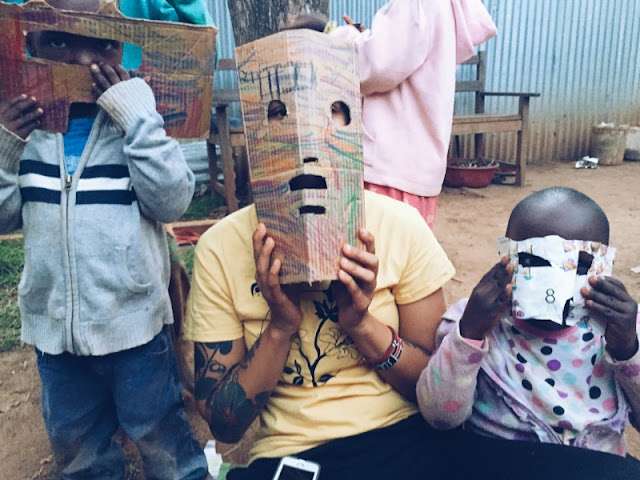 As a surprise to our friend, Sara, who flew in Sunday morning, we packed up her two favorite girls and brought them home with us so they could be up and ready early for the drive to the airport. But first, a surprise for them: late night snacks at our favorite restaurant in town. 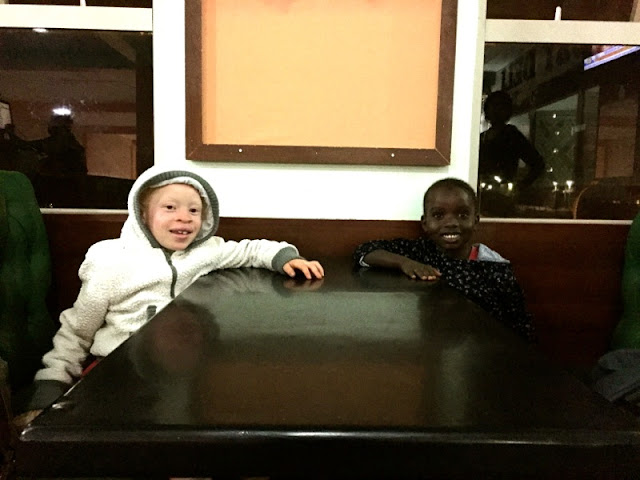 We headed home, thinking we'd put on a movie and they'd fall asleep... 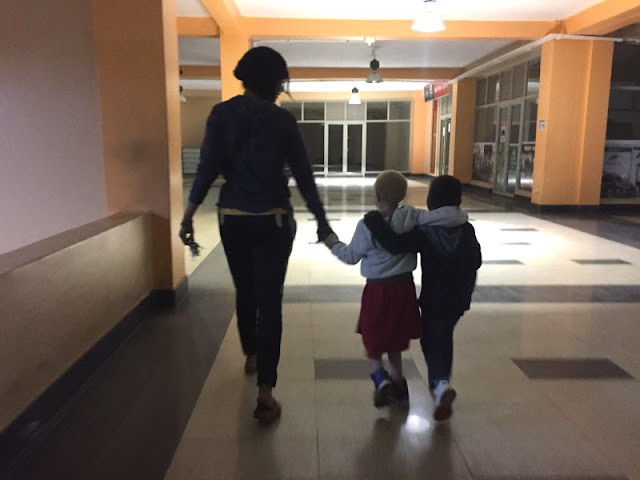 Joke's on us: they were WAY too excited to sleep when we got home. They wandered in to every room, opened the refrigerator, stood in front of the fan (which they'd never seen before) crawled back and forth in the space behind the couch and only watched a total of 8 minutes of Enchanted. But, the good news is: when Sammy said it was time for bed, they said, "Okay. Good night!" giggled for a few minutes and then fell asleep. So dang cute.

The next morning, we had some toast and tea and left the house early to surprise Sara at the airport. It's about a two hour drive...not too bad, really. Except, about twenty minutes in, I turn around and Linah is throwing up. Directly in to her lap. Multiple times. I am totally mentally weak when it comes to throw up, so all I could do was lean out my window and say, "Uh, Linah's barfing. Yep. Still barfing. Oh yikes. That's a lot of barf."

We pulled over and Sammy cleaned her up and gave her a small bag in case she got sick again. At this point, Sammy is laughing thinking about what a backfire surprise this is for Sara. "Surprise! Here's your favorite kid, but don't hug her because she's covered in throw up...oh yeah, and you have to ride back in the backseat that's also covered in throw up. Welcome to Kenya!"

Sara is a great sport and waaaay more mentally tough than I am...she climbed in and held Maureen close to avoid the car sickness on the way home, but never missed a beat with conversations and jokes. She was here last summer and everyone is so excited to have her back.

After an early (and eventful) morning, we all went to Sammy's to sleep for a few hours. The power was out all afternoon and it lightly rained for about a half an hour--not enough to make the roads unmanageable, but enough to make everything a little muddy, so when we arrived for dinner at the kid's house, they were all stuffed in to the living room, eating chapati and potatoes.

When they finished eating, we ran around outside, enjoying the remaining sunlight.

Bram asked me to take his picture and, as I did, Male walked up and asked for one, too. Her sweet face looking to Bram for a cue on how to pose is so cute. 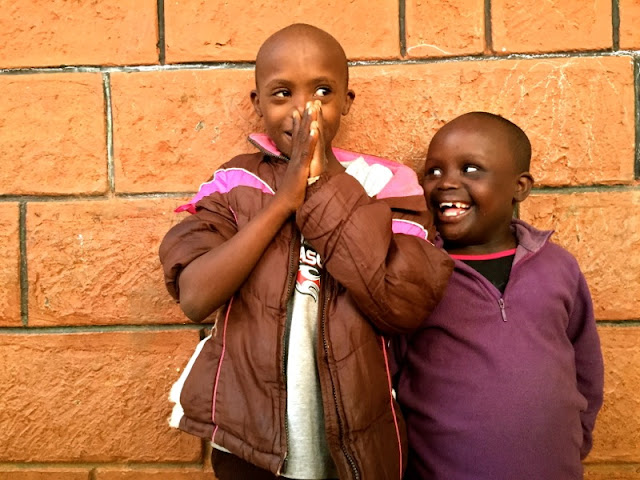 There were about two dozen other pictures taken last night, but I'll spare you, since this post (and the vomit tales) are probably enough for now.

Lots more of these adorable faces--and stories to go along with them--comin' attcha this week! Including an update on the under-construction NEW Precious Kids Centre.
Posted by Allison at 9:04 AM