If I'm really honest, the idea of going to church on a Sunday in Kenya is a mix of emotions. I want to go, dance and sing and be with friends, but I know the service will be nearly three hours long, probably hot and over half will be in Swahili, so I won't understand much (or, they will choose to translate for me, the only white person in the room, and then it will take twice as long...not sure which is more tiresome.) So, in my own selfish little heart, when I was invited to go to church with my friends Geoffrey and Olivia, I tried to come up with several excuses as to why I couldn't. In the end, they knew I was being a baby, so they told me they would come pick me up around 10 and bring me to church. (The service starts at 9, so they were being kind by letting me miss the first hour.)

We pulled in to the church, which had a really nice cross-breeze--already a win--and they began to sing (in Swahili) a melody which sounded very familiar to me. I paused for a moment, to listen more closely, and realized it was "How Great Thou Art!" I looked at Olivia and smiled, and she said, "Oh, you know this one?!" And I, as the only white person in the room, sang along--at the top of my lungs--as the rest of the room sang in Swahili, to our One great God.

After nearly an hour of singing and dancing (the woman who led was about 7 months pregnant, and wearing three-inch heels, but it didn't stop her from dancing and jumping and singing with enough energy to match the rest of the room (probably 100 people!) She was incredible.) we sat as the pastor began to give a message, in a mix of Swahili and English (which was a real gift: I could understand pieces of what she was saying! but there was no need for a sentence-by-sentence translation only for me.) Olivia handed me her baby as she cared for her older daughter. Chanel sat in my lap for the rest of the service just gurgling and smiling and clapping...such a happy baby! (Later, they told me, I may be the first white person she's met...so I'm really surprised she wasn't more fearful.) 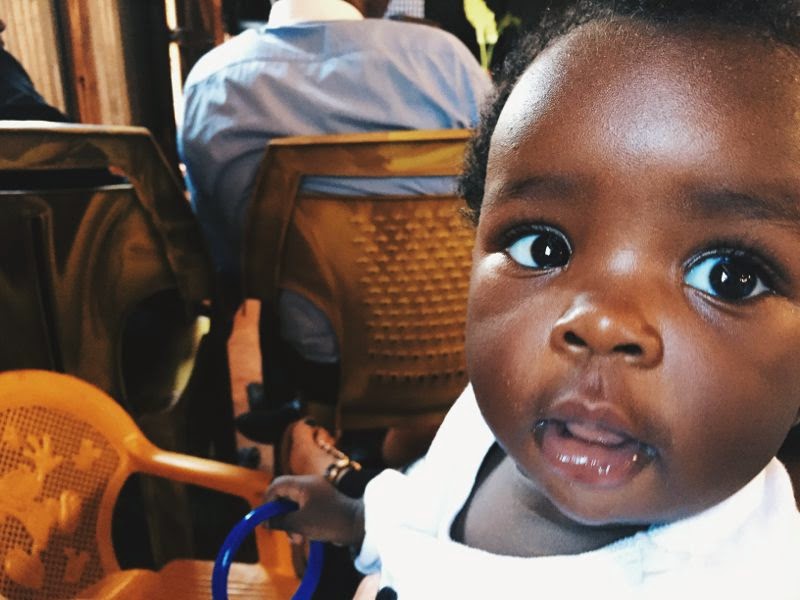 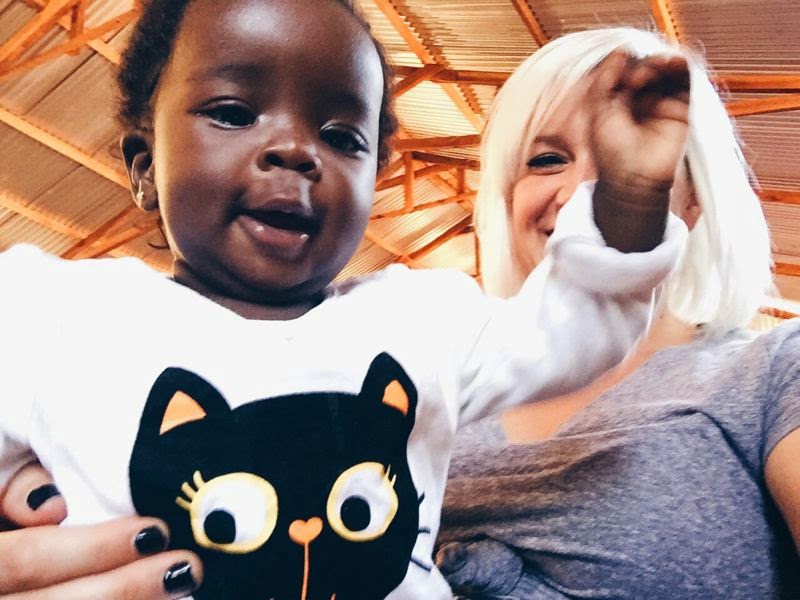 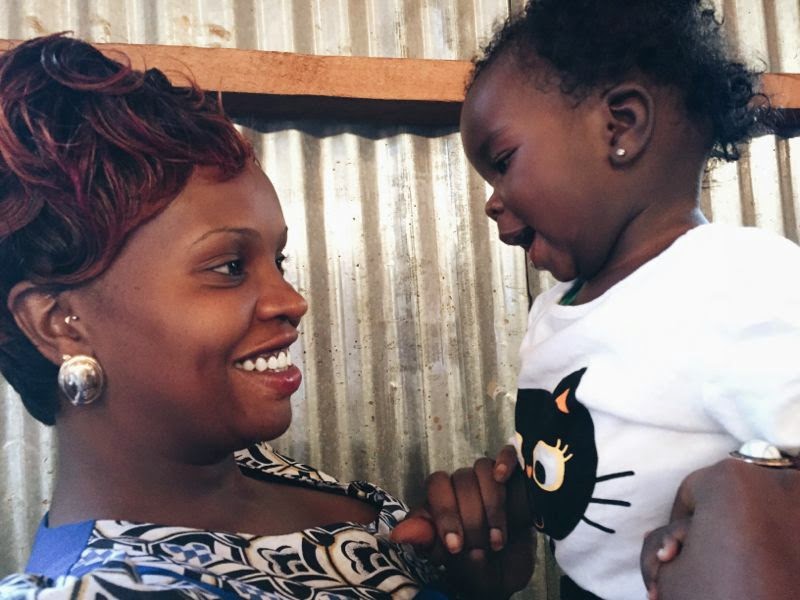 When I lived here, I attended church with Geoffrey and Olivia each Sunday. They have since moved homes and now attend a church in their new neighborhood, so this was my first time at The Church of the Living Word, but our tradition of lunch at Alakara Hotel lives on. We took a taxi from church to town and, when I asked Josiah where we were going, he told me, "we're going to get sausages!" with a huge grin. 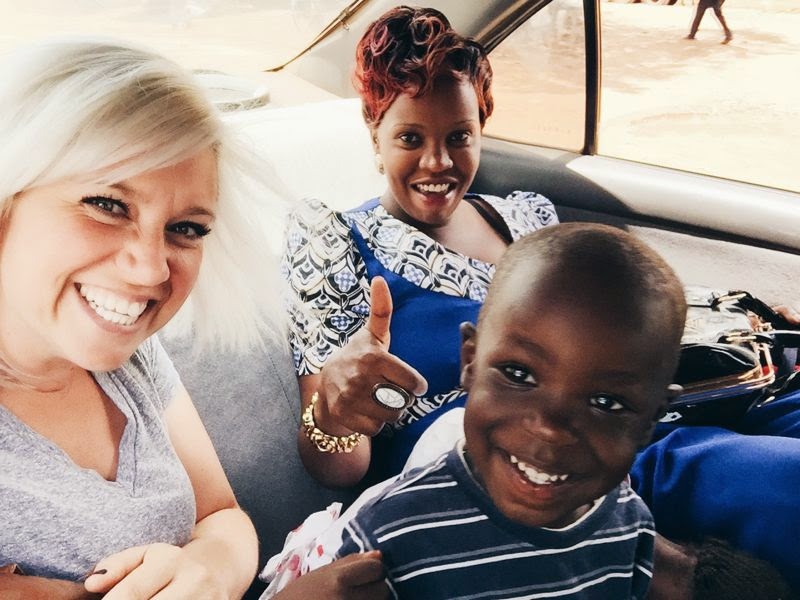 Geoffrey was the director of the drop-in center, Oasis of Hope, so he and I worked together nearly everyday in the seven months I lived in Kitale. At the time, they only had one daughter, Charlotte. So, having seen photos of their two younger children on Facebook, I was REALLY excited to meet them in person! Josiah and I became fast friends as he showed me each of his plastic animal toys, named them, and then had the big one of the pair hug the little one. He's, obviously, adorable. 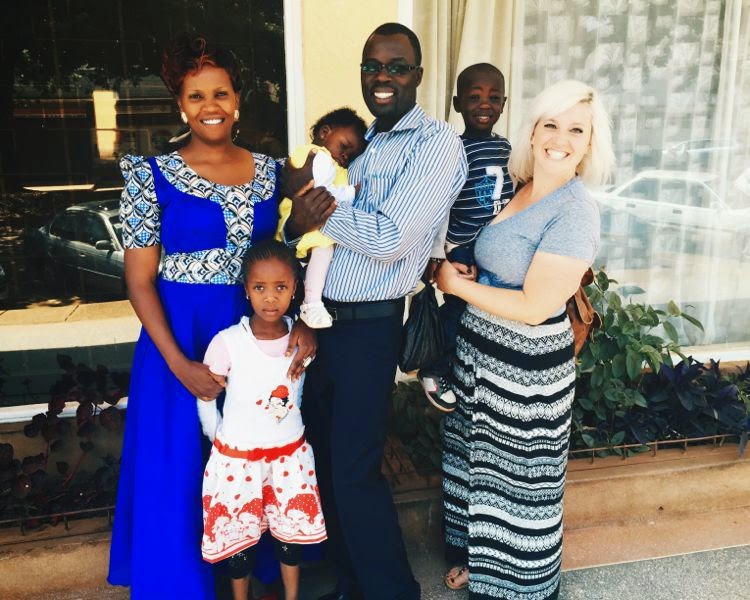 As we sat in the restaurant, a few of the former Oasis house boys (all former street kids) trickled in to meet us. Here is Evans, Kevin and Moses. 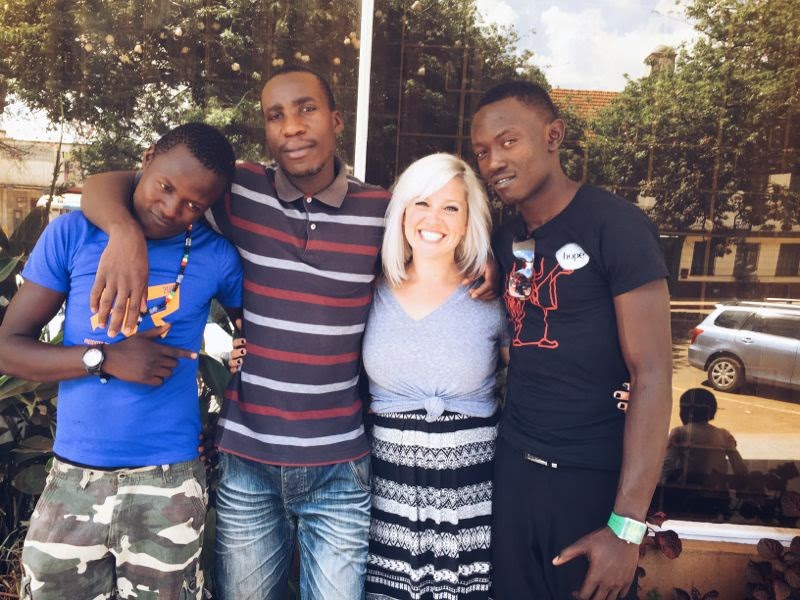 My phone rang all afternoon with more Oasis kids, out of school for the weekend, looking to meet up with us for a while. This is Dorcas. She is now in Form 3 (Junior year of High School.) She has great grades and wants to be a doctor! 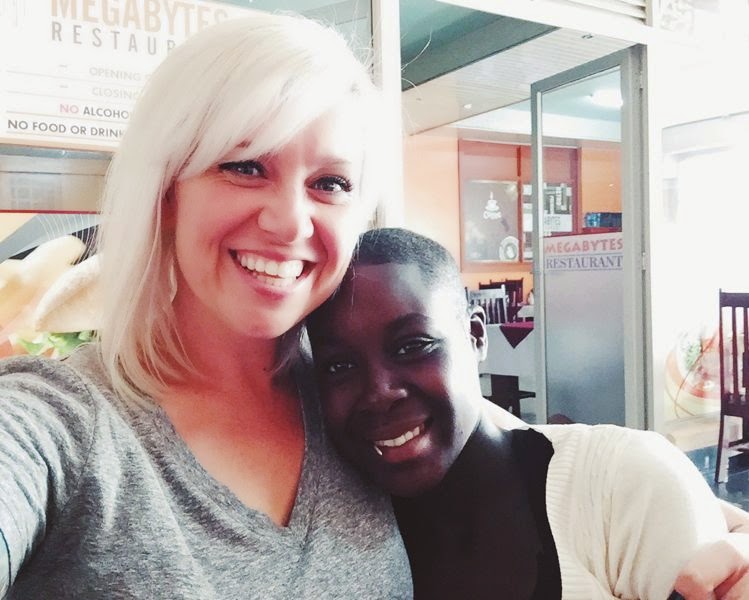 Sammy met us in town and drove us back to her kid's house, where Christine and Sheila were waiting! Christine is in Class 8, nearly ready to graduate from primary school. Sheila is just a few months away from graduating high school! When I last saw her, she was so young and was still finding her way in studies and her grasp of the English language...yesterday, she looked like a full-grown woman, spoke beautiful English and told me of her hopes of going to college to continue her studies. 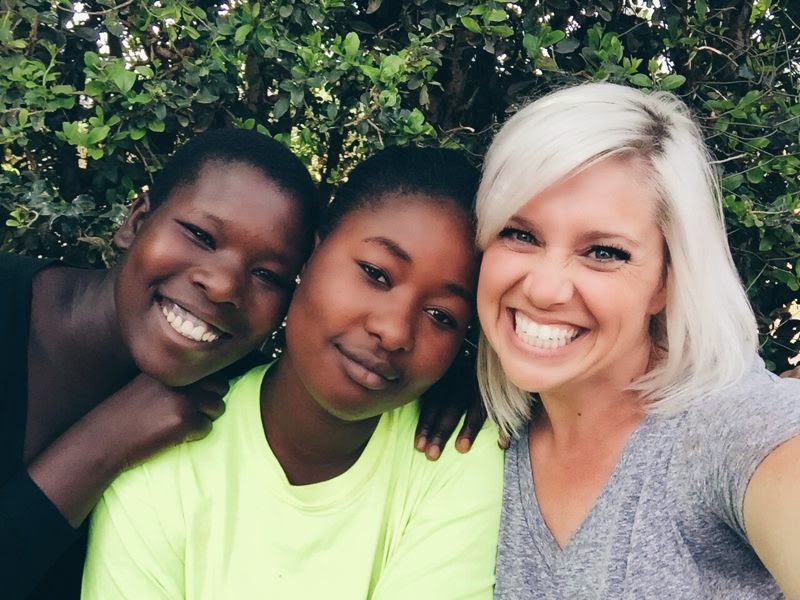 I had been a little concerned about bringing the Oasis crew to Sammy's house. I wasn't sure how comfortable or engaging they would be with the Precious Kids. (Many of the kids at Sammy's house are considered outcasts or unwanted, some tribes even go so far as to say they are 'curses upon the family' because of their disabilities or physical appearance...so I just wasn't totally sure how the mixing of the two crowds would go.)

I was so pleasantly surprised by the way the Oasis kids jumped right in. They picked them up, walked around, snuggled with them as they watched TV...kicked the 'soccer ball' (which was really a balled-up pair of black dress socks--so, would it be called a 'socks-er ball'?) around with some of the bigger kids. And, of course, we took a million pictures. 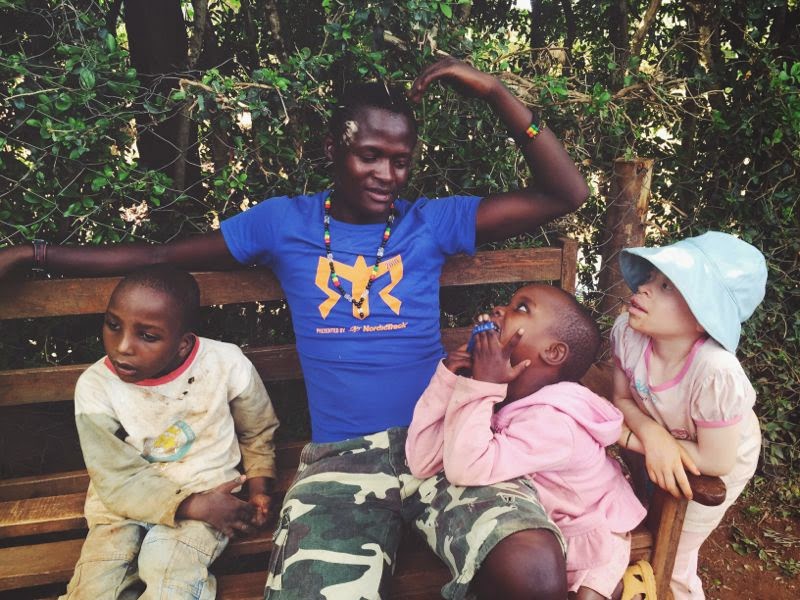 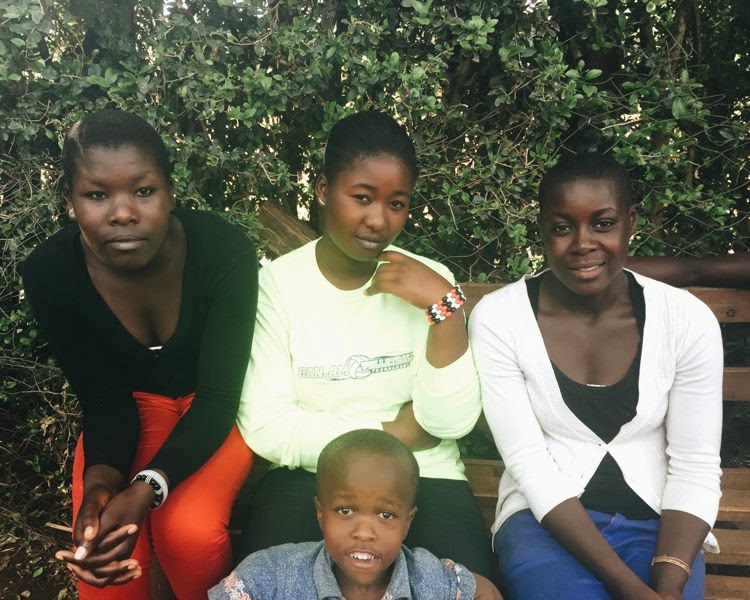 When Sammy came back, after a run to town, she told me that a few of these girls used to live in a house with some of the Precious Kids, so they are old friends. It was sweet to hear them call each other by name and pick-up right where they'd left off. 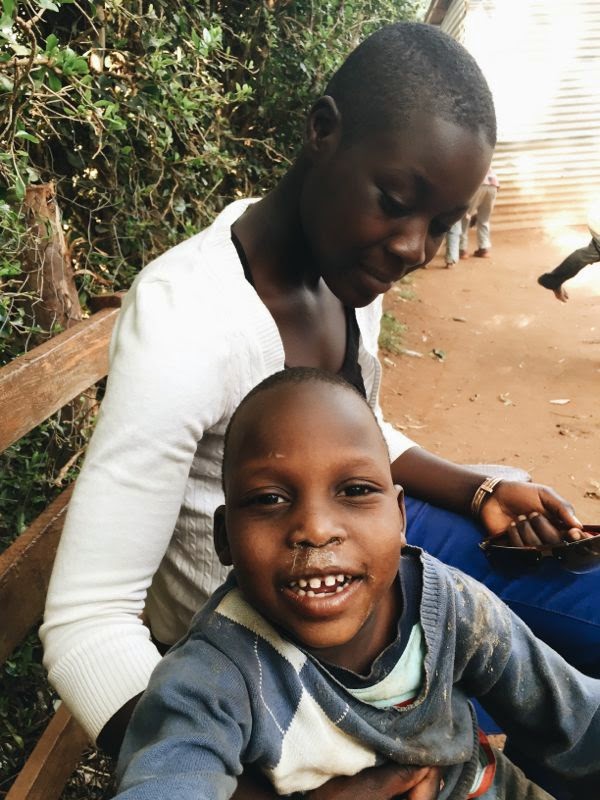 Moses (Oasis Moses) had never really been to Sammy's house before, but after about twenty minutes, he caught me and said, "I wish we would have met here earlier today. I could have spent the whole day here!" I told him that Sammy would be more than happy to have him come over and hang out again sometime...he said he's excited to come back.

As soon as he found out that this little guy's name is Moses too, (and--to add to their connection--both were named after Moses from the Old Testament because they were found by strangers, having been abandoned by their mothers as small children) they were inseparable. 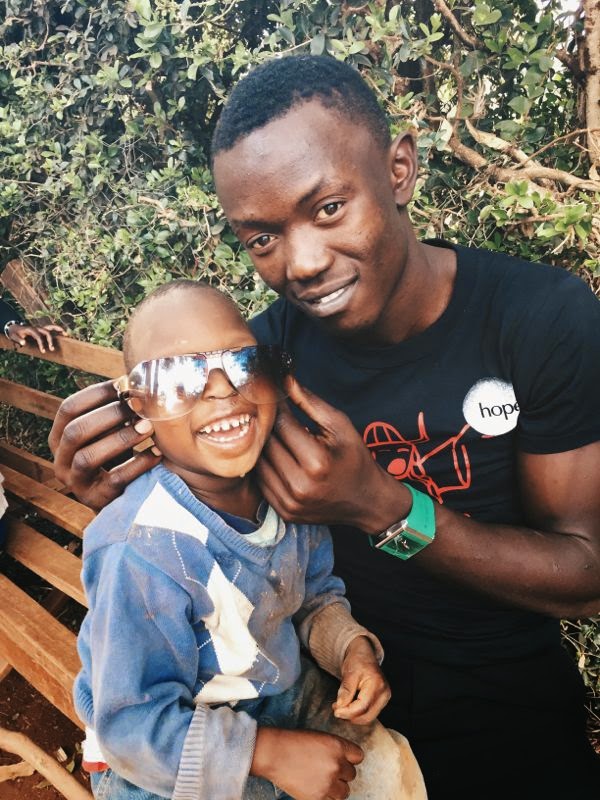 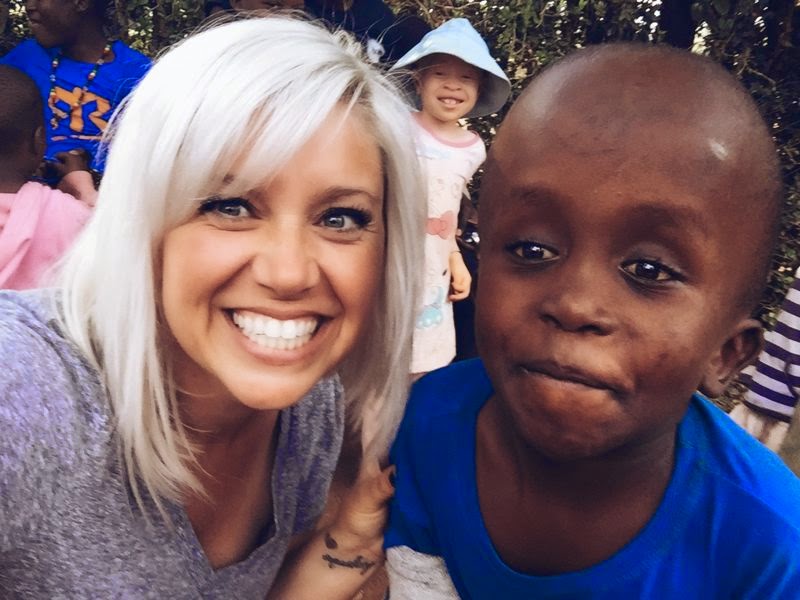 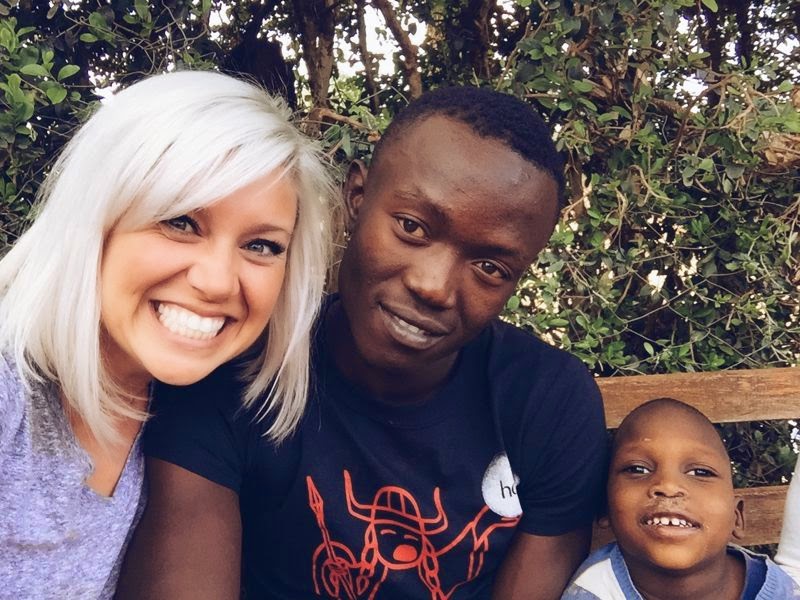 Suzie is seven and does not speak. Sammy thinks it's due to the mass amounts of trauma she has encountered in her life. She jumps and flaps her arms and sputters to show her excitement...I try to catch her, over a dozen times each day, look her in the eyes and tell her how loved she is. I told Sammy that she is my favorite...and I want to cuddle her all the time. 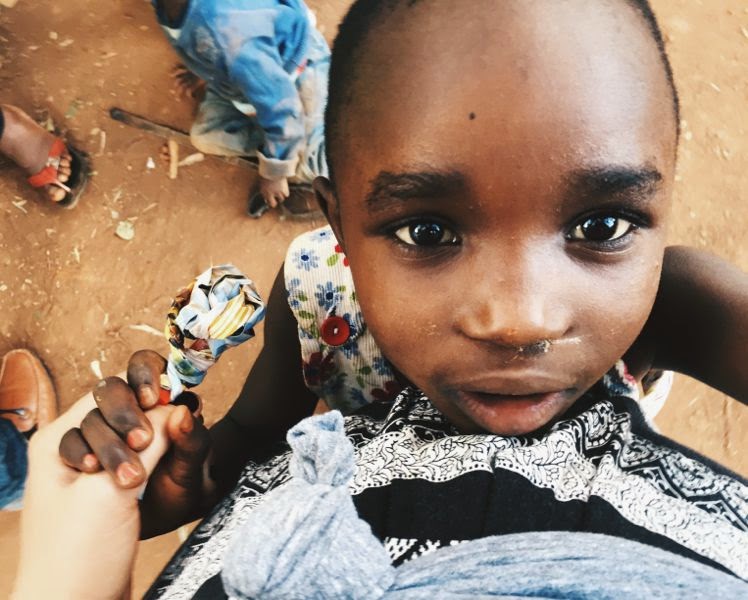 As the older kids were getting ready to head home for dinner, I caught Moses and Moses once more. I told (older) Moses that this afternoon nearly made my heart explode with joy. When people you love meet and fall in love with others that you love, it's just such a gift. And--what's more--to watch children that had been abandoned or neglected, desperately in need of love and appropriate touch, grow up to become (nearly) adults who have learned to give and show love to a younger generation in need of that same appropriate affection and care...oh my gosh, I was so proud and so humbled to have been part of that afternoon. 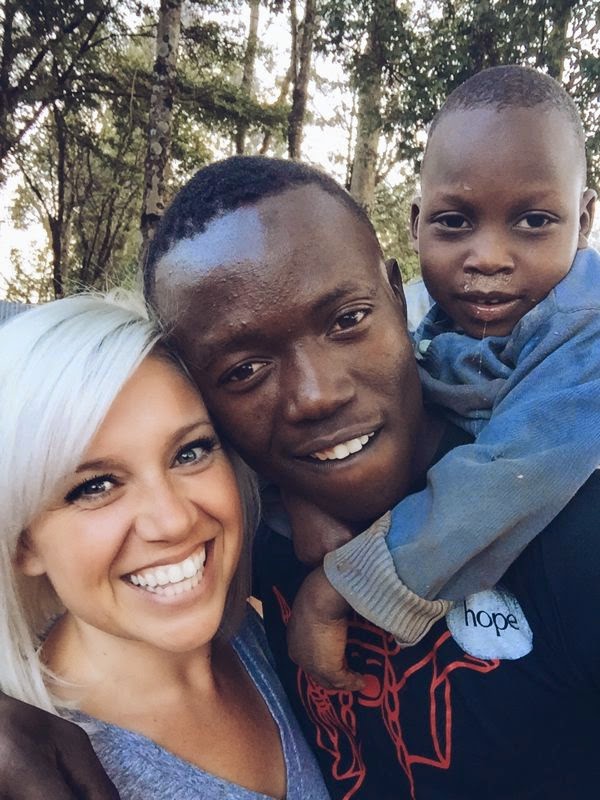 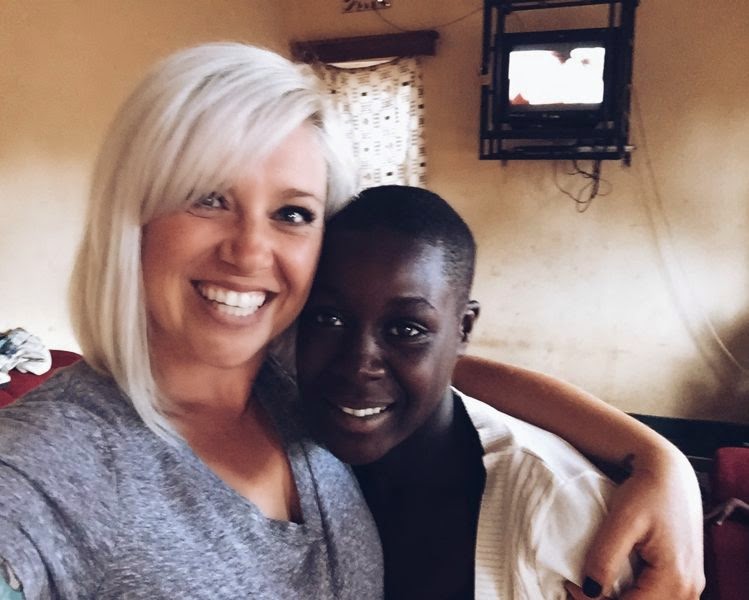 {One more with Dorcas} 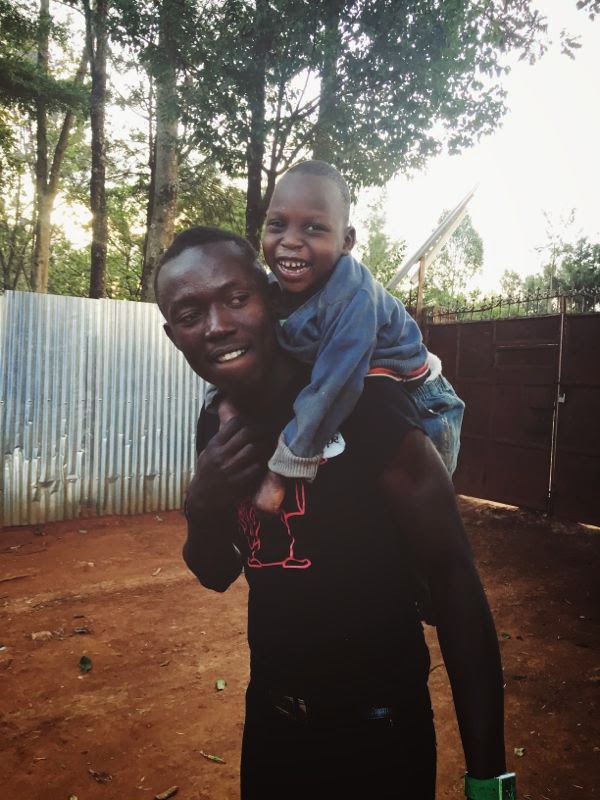 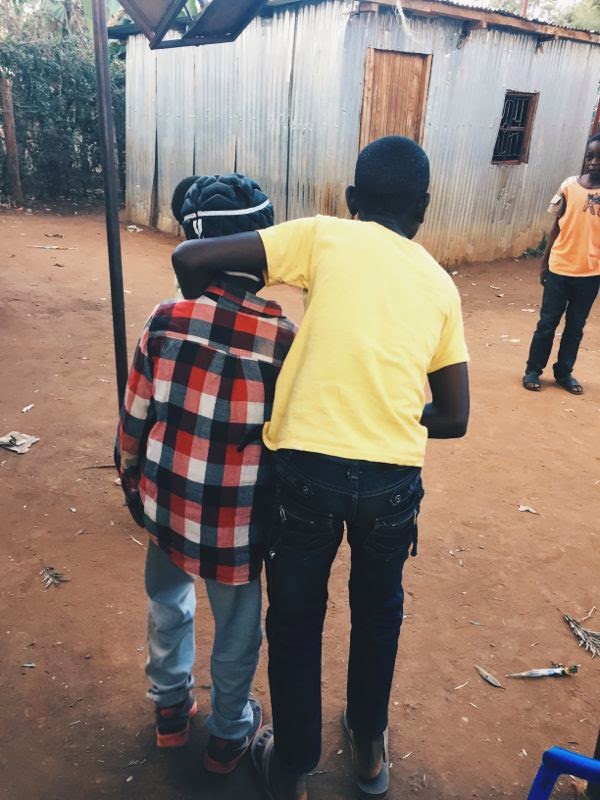 {Willie had his feelings hurt when I told him he couldn't play in the mud out front. One of the school boys who is home for the weekend, put his arm around him to comfort him and took him over to play a new game.} 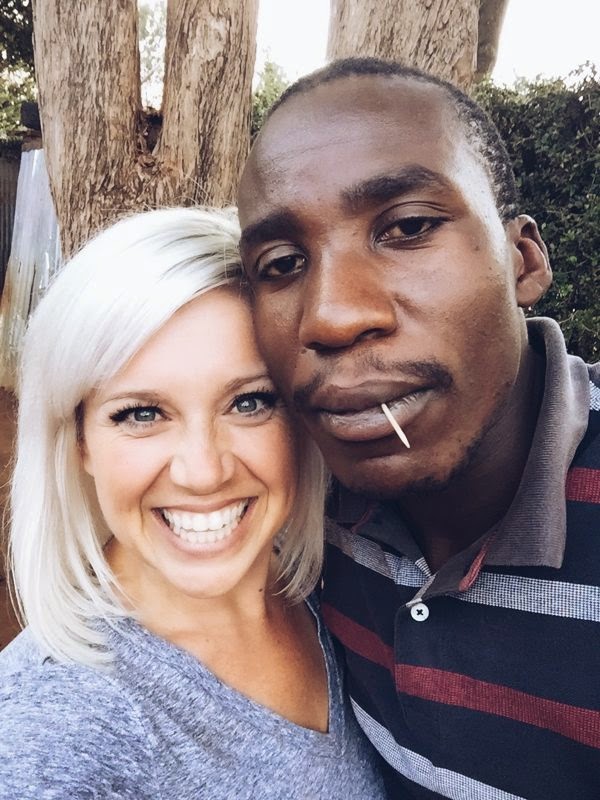 {Kevin was the first Oasis kid to graduate from Form 4. He told me yesterday that he would like to go to college for fashion design.} 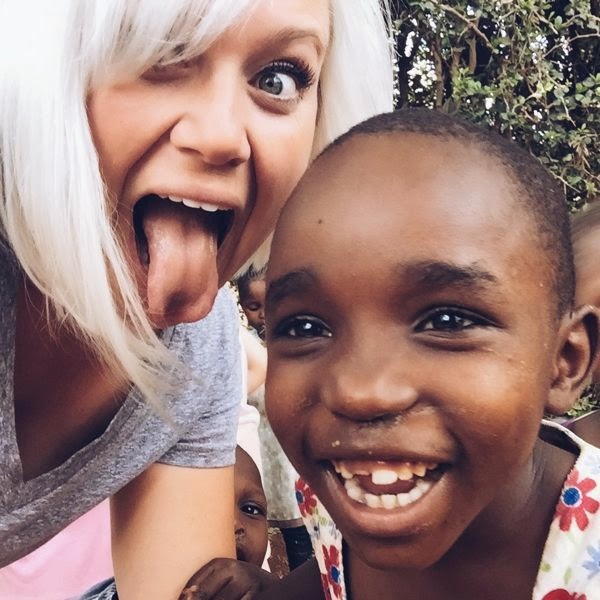 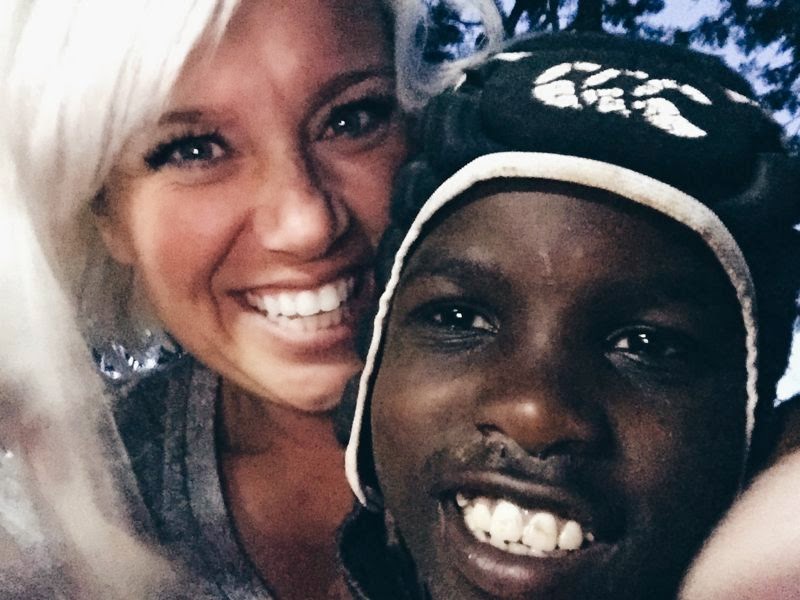 {Willie has epilepsy, so he wears that rugby helmet to protect his head in the event of a seizure. He is, without a doubt, the sweetest and most hilarious kid at Sammy's house.} 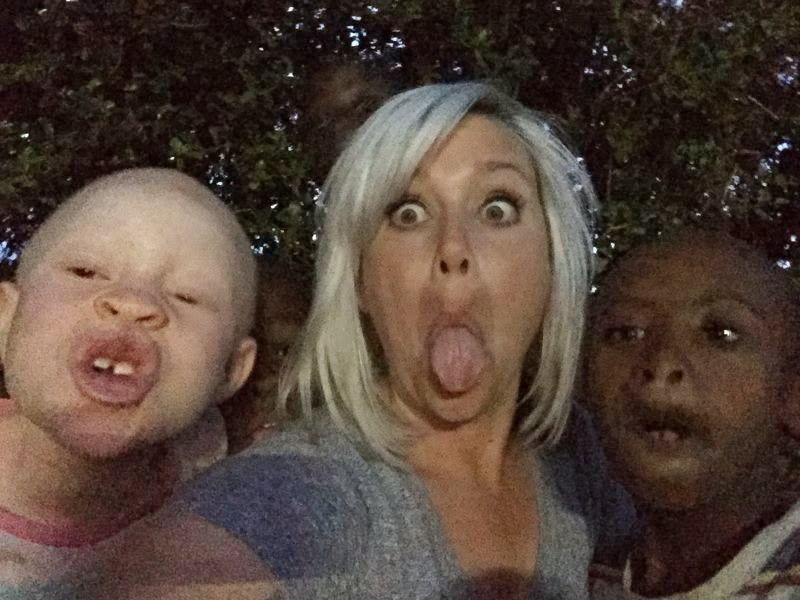 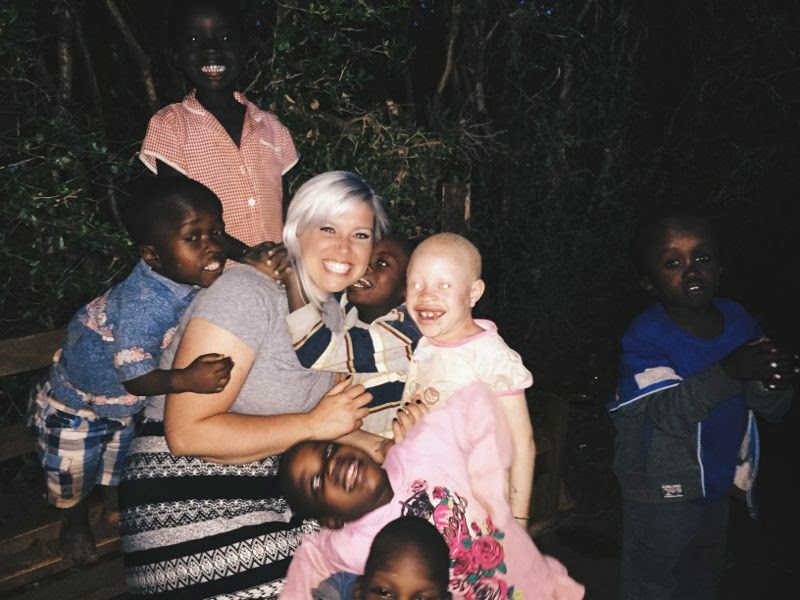 {Frank took this one of the dog-pile on the bench}

For those of you that made it this far through this wordy post, here is a special treat for you. After singing "Let It Go" and "Baby" (by Justin Bieber, of course) all afternoon at Sammy's, one of the sassier girls made a list of the "Noise Makers" in the house. I was first on the list. A few minutes later, she made some additions to the list: putting a number by each person's name to show just how loud they are in comparison to the others. My number: 10,000. (Joke's on her...she's not the first to tell me I'm the loudest in a room!) 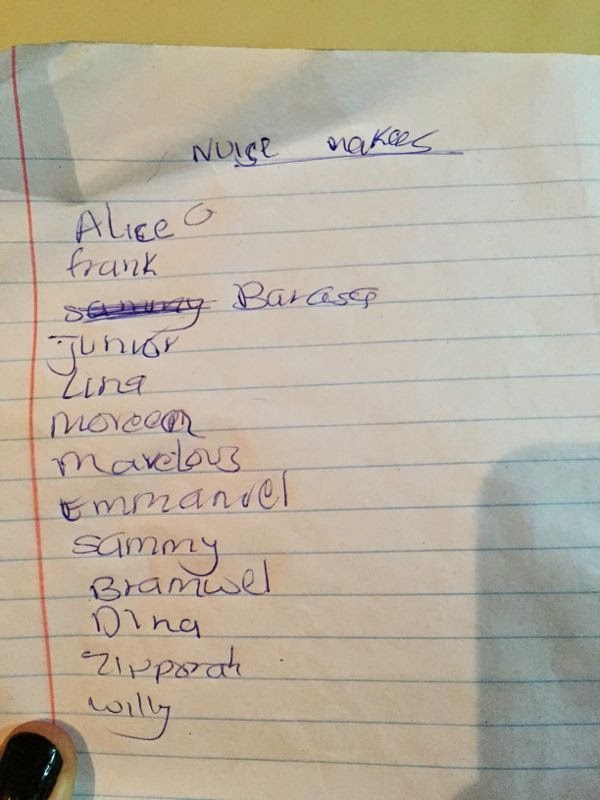 We finished the day by having dinner with James. James grew up in Kitale and was one of the most comforting (and helpful) friends when we lived here. He has, since, moved to California (where he has earned his Masters and is beginning his PhD.) He's married to a Californian girl and they have a 14-month-old son. He is in town for the week purchasing some land for when they, eventually, move back here. It was so fun to catch up with him...and to think that he will be back here in my future trips too! (You know, or when I eventually move here, too...)
Posted by Allison at 11:22 PM

I LOVE when you are in the room...it's not that you are loudest, it's just that you're the most ALIVE and full of LOVE and LAUGHTER! I am so happy that you were with James! Amazing...
I love you!

I'm a little late to the game. I kept looking at my bloglovin' for posts, but just realized today that I was looking at your other blog.

Any way, this post...I cried, oh did I cry. You are so right!!! To see the old Oasis kids so moved to love on the new Precious Center kids - it is SO powerful. What an incredible testimony of God's grace and mercy.

And James!!! What a joyful place to reconnect.

For the record, still crying.