Your First Two Days in Nairobi

About ten times today, I thought to myself, "I love working with high school students."

What an amazing (read: filled with events, stories, laughter...and a little sleep) first few days we've had. After twenty-something hours of travel (and a few tears of anticipation--mostly from me), we landed in Nairobi. We waited in the line to get our visas and ended up as the last in the room! Watching high school students talk to a Kenyan government official might be one of my favorite things; smiling at the camera, asking which page the stamp will go on, talking to one another instead of to the man...I loved it.

We walked down to baggage claim (every bag made it!) and out to the arrivals gate where we were greeted by the pastors and student leaders from Mavuno! We shook hands, hugged, squealed with excitement (also mostly me) as we headed out to our team bus.

A quick stop at the hotel (for showers, but no naps) we jumped back in to the team bus to meet the rest of our team for lunch!

The food court at the local shopping mall had no idea what the afternoon would hold for them. 24 teenagers talking, laughing and even singing as strangers became friends.

Nikki telling Pastor Daniel that she is an excellent singer...
When he asked her to sing for him, she said,
"Oh, I need to warm up, I'll sing later!" 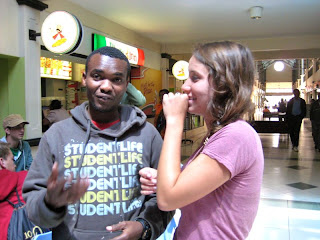 Rearranging chairs to sit next to their Kenyan partner 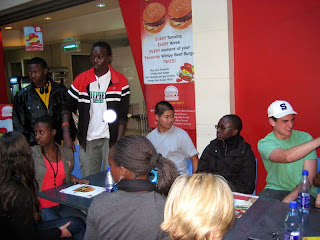 About a dozen (buy one get one free) pizzas later, we were off. This time, the bus was FULL of both students and conversation.

Our first group stop was the Ex-Cans meeting at Mavuno Church. Each year, the Form 4 (the equivalent of senior year) students "sit for" (take) their National Exams (KCSE) in December. Those who sit for these exams are referred to as candidates. In the nine months between sitting for the exam and enrolling in University, they are considered "Ex-Candidates" and Mavuno has a weekly meeting for those students. (Because of the Kenyan accent, most of the American students thought we were attending an Ex-Cons meeting!)

We played a few games to help learn names
and help alleviate some of the nervousness or pressures
of making conversation in a room of strangers. 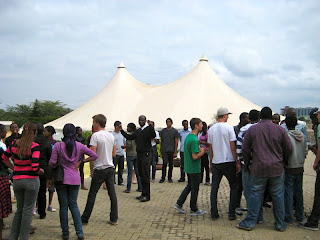 We then split in to three groups for the skit time.
Group One: 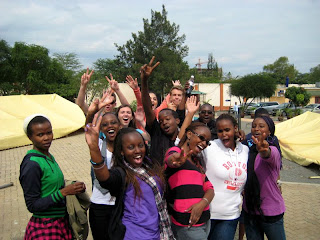 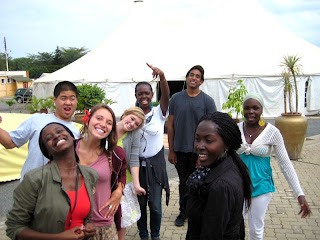 Group Three:
whose skit was more of a movie, length-wise. 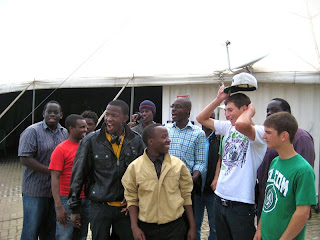 Since we were now about 10-hours in to the day following our super long travel, it was no surprise when a few of us fell asleep during the meeting. A brief nap later, we headed out to our first team dinner.

It had to be some place really delicious to make it worth getting out of bed, so we headed to the Java House. It was a little chilly outside, but the food was good...and the boys had milkshakes; the best in Nairobi!
Colin, Josh, Pastor Daniel, Harry and Dida 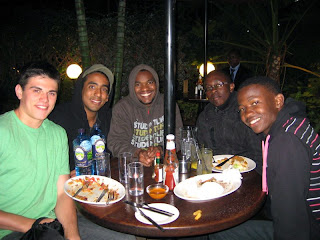 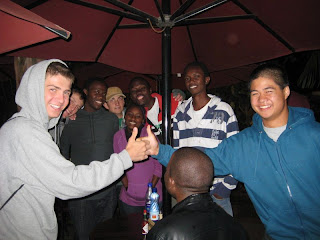 Back at the hotel, we had two team members share their stories, spent some time writing in our journals and then shared what we'd experienced.

I love the moments on this trip when there are no "Kenyans think like this" or "Americans feel this way", but there is simply "Every teenager..." Last night, it was so interesting to hear many of the students that shared begin with, "I was so nervous to meet you...what if you didn't like me? What if I didn't fit in?" and then end with sentences like, "I felt accepted and cared for and heard. I no longer have to be afraid of whether or not you want to know me...because I already feel like you do!"

What an amazing end to our first day!

Day two began early, but with about nine hours of sleep, we were fresh and ready to go! 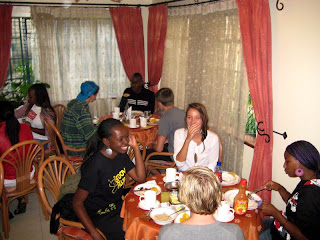 Harry and Tyler with Dida.
Michelle, Emmanuel, Grace and Shareen 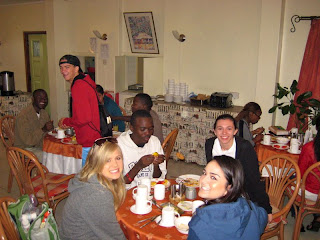 After breakfast, (omelets, fresh fruit and some really tasty coffee) we headed out for our morning devotion. BP read through 1 Samuel and gave us time to journal. 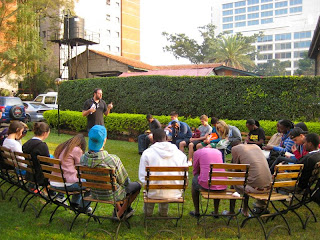 Inside the team bus.
To pass the time in traffic, Grace rapped for us
(the Kenyans rated it a 2 out of 10).
Video to come, hopefully! 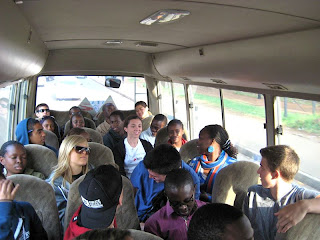 We made a brief appearance at the Mavuno Church staff meeting where we sang with the staff, introduced the team and were commissioned by one of the pastors.

Can you tell how much the team loves each other already?
Five minutes of down-time and, of course,
it's spent taking pictures together. 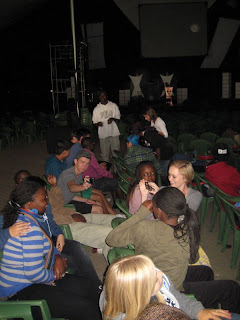 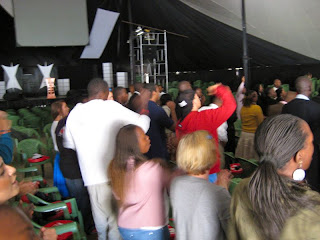 We spent the remainder of the day at Chamarrecc Primary school in a local slum. Last year, we resurfaced a school down the street. Today, we rebuilt benches, fixed some holes in the roof, stitched torn school uniforms, covered school books, hammered down the sharper edges of aluminum siding to prevent injuries (or more torn uniforms), and ran around playing a lot of games with children from the community.

School children who, for some reason,
shouted "Chapati" as I took the picture 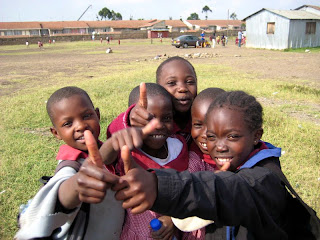 Tyler and Dida with their "babies" 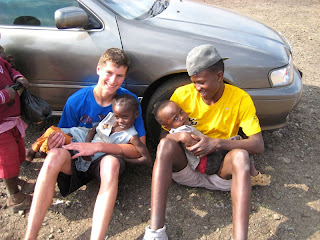 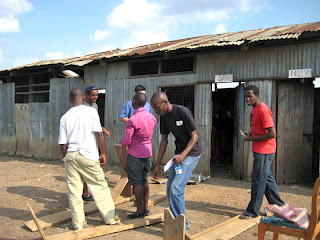 Jason and his hammer 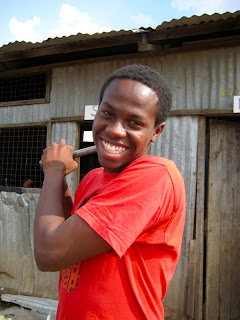 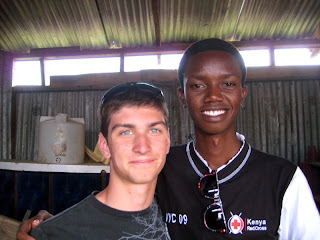 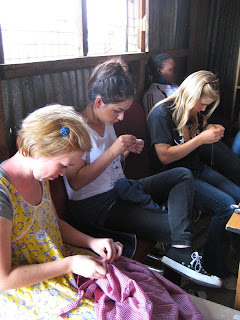 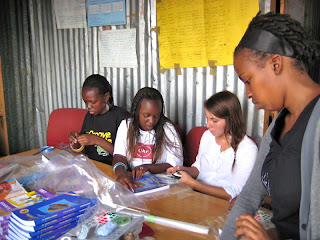 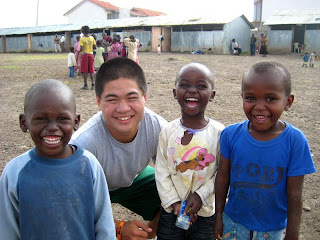 Grace and her crew of dancers 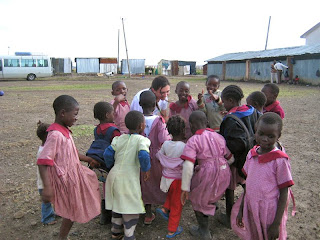 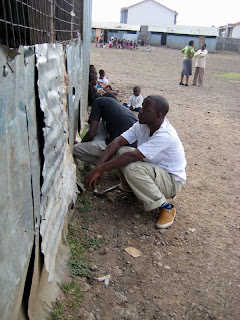 Colin, Connor, Dida and Josh
who did not stop working all afternoon!
(Dida had to make-up for the time I caught him sleeping during the work project last year!) 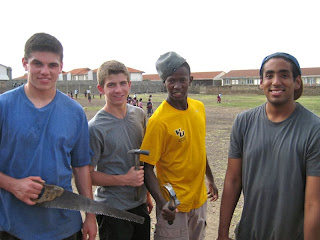 It was a long, but productive day...and it wasn't over yet!
We were having dinner guests.
With fast showers and a change of clothes, we sat down to dinner with the heads of several Frontline Initiatives from Mavuno Church. (We're visiting each of them this week, so I'll explain more about them as there are pictures to show and stories to tell.)

To keep everyone from falling asleep, we kicked-off our meeting with a brief dance party. 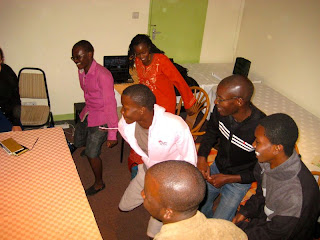 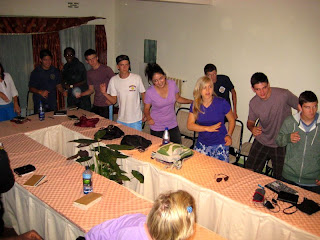 Oh, and then did affirmations, journal time and sharing standing up...just to be sure no one missed out on what God is doing in the hearts of their team members! 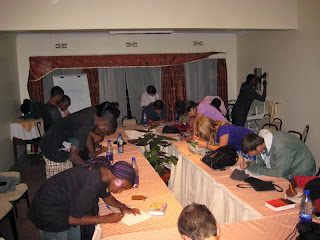 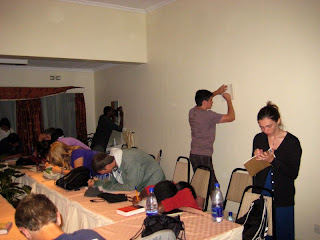 God is moving. God is speaking.
I know that minds are spinning and hearts are breaking...
I'm not sure I can express how excited I am to experience first-hand all that God will do on this trip and in this team.

WOW! It's so fun to see everyone jumping right in and connecting. We are praying for you all continually. I hope each of you comes back with stories of "why I knew this is where God wanted me at this time." Give Connor and the rest of "my boys" a hug for me. Love to you all....Kathy Valentine

OK....didn't realize my Google ID is Rat Man with a photo of one of my son's rats.....this is disturbing on so many levels.

I love when you're in Kenya. You are just SO in your element and definitely doing exactly what you were made to BE!
Thinking of you and hoping the time goes by REALLY slowly!
Keep your eyes open for Triceratops!

What a wonderful experience. God is working mightily through all of you. We love you Connor and are praying for the whole team. Love in Him, Grammy & Grand Dad

So awesome! Thanks for the great update and all the pictures! It makes us feel like you are not so far away. Hugs to everyone...especially Tyler B!