Street Boys: Past and Present

Last night, as the team waited for dinner and I waited for my taxi to the boys house, Matt and Chris entertained us with some gymnastics (read: pole twirling) and then a little friendly comedy (which, for them, typically includes talking about how much they love each other). 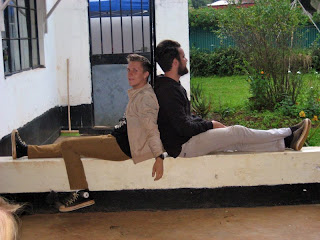 Dan picked me up and took me to House 12. It is a rare night that I get to be there alone with the boys and those really are my favorite nights. No one needs to perform or entertain...everyone just sits. And those are the nights that feel most like home.

The boys didn't know I was coming, so they were very cute when I walked in. Elvis was spending one last night at the house before going back to school (he's had a crazy few days...and I'm not sure I even understand the story after two re-tellings...I guess I'll need to ask Geoffrey.)

I sat with Moses and we worked on some Math...Steward popped in and out of our conversations. We'd stop to talk about acne and listed the most handsome Oasis boys (they both said, "I will not include myself in this list".)

The little boy, Robert, from next door was there...and, of course, Moses can give me the best version of his story. Robert lives alone with his father, who is a shepherd for the neighbor, and also has leg deformities that make walking difficult. They live in a little mud hut in the corner of the owner's plot of land...and the employers underpay and overwork him. There is hardly enough money to survive and definitely not enough for food. So the boys give Robert two servings of food each night: one for him and one for his dad. When I bought sodas last night, Robert drank half of his and took the rest, in a mug, to his dad. I wish I could explain the gentleness with which Moses told this story. I wish I could explain the weight in my chest as I watched this smiling 10-year old take food and Sprite to his dad. I wish I could explain the feeling of "obviously-this-is-what-we-do" that the boys had as they gave Robert his serving of githeri.

But some things can not be explained in writing.

I left around 8:30, hoping to catch some of the team debrief at the compound--and give the boys some time to finish homework and get to bed at a reasonable time. But had to take a picture with each of them first...to document the changes between visits, if nothing else. 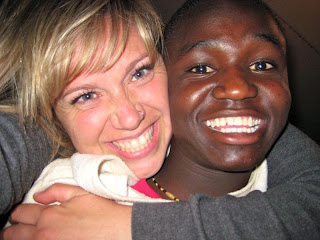 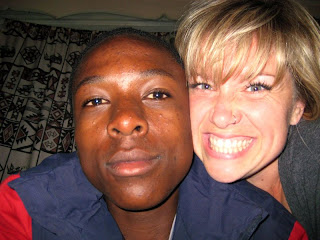 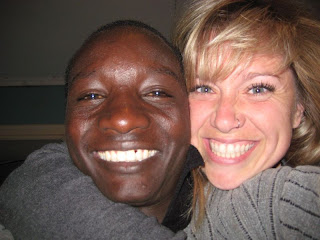 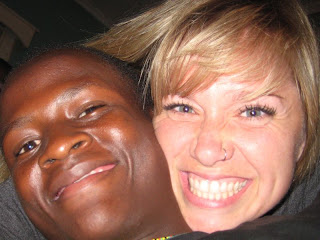 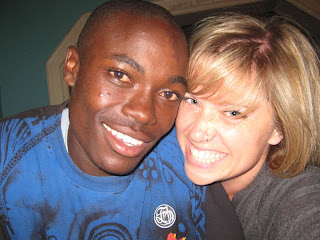 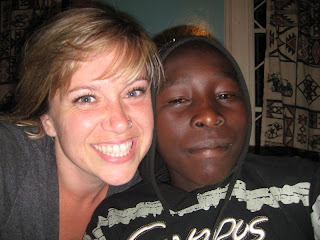 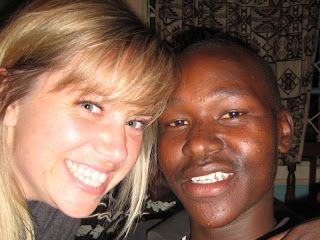 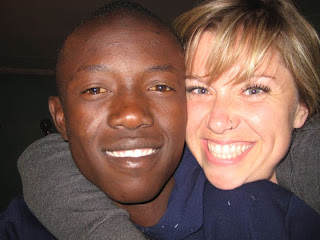 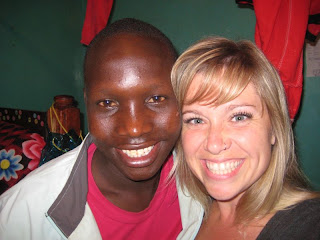 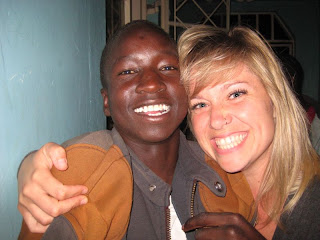 I arrived home to a room filled with people who all said, "Oh! You're just in time!" Turns out, there was an impromptu puppet show contest being held in our living room. The team had split in half and were composing puppet shows to be performed at the medical clinic on Saturday.

Team One wrote a skit about being tested and treated for HIV. It had some adult themes in it, but also some great lines. 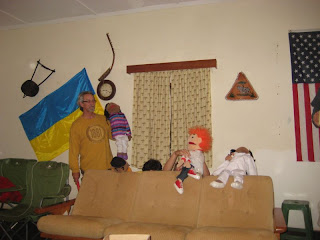 The crowd...and Judges: Chris and Steve 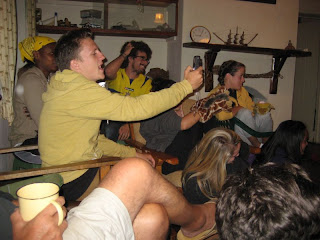 Team Two wrote a rap song about health and hygiene. The best line was: "If you think you have worms, we'll need some proof...so bend over and let us see you poop!" (Needless to say, they won the contest...hopefully I can post the video of their entire skit at some point.) 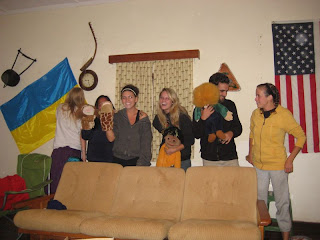 Around midnight, three taxis pulled up in our driveway and took 20 of us in to town to give blankets to sleeping street children (and adults). I began to cry on the way there...completely unsure of what I was about to see or how I would ever reconcile the images with what I know to be true about God's provision and care.

We pulled up for the first stop. About 10 little bodies lay on a shop-front veranda, covered in sacks...they looked like a line of corpses. I lost it. So many questions filled my head: "Where are their moms?"..."God, where are you in this?"..."This is terrifying, how are these tiny kids not scared out of their minds sleeping here in the open?"..."What else have they seen or experienced out here?"

And then Geoffrey (who co-founded Oasis of Hope) grabbed my arm and said, "Look. These are the three boys that came to Oasis for the first time today." Chris grabbed my hand and walked me over...pointing at each boy and naming them. And then I realized: this is madness, yes. This is injustice right in front of me. But God has placed people (specifically Geoffrey, Lydia and the Oasis of Hope team--along with other organizations and people) in Kitale to see this need and be his provision for these kids. Something is being done about it.

Something is being done about it.
We can do something to help.
God is meeting their needs through the work of His children here...and through the giving hearts of people in America, too.

This does not erase what I saw. This does not take away all of my questions. But those are things I will continue to wrestle with God over. Those are questions I will ask Geoffrey today, too.

Kitale is beautiful. Street life is ugly.
But Jesus' love is present...and His people are at work restoring His children to Him.

And I have to rest in the fact that the same God who loves me, loves them...more than I ever could imagine...more than they will ever imagine.
Posted by Allison at 11:15 PM

Wow...quite an emotion-packed post this morning. Having been there, I can picture what you describe and it literally breaks my heart. I am sobbing right now thinking of how graciously they all care for one another and share with one another when they have so little. When they have nothing, really.
And, it humbles me. It slaps me in the face, really, that I would cry for the injustice in MY life...how selfish am I? Why would I deserve so much more.
Wow...emotions are running heavy this morning and I need to pull it together and go to work (talk about the other end of the spectrum...)
I love you, Allison. I don't know how you do it...but I am DAMN sure you're supposed to be doing it.
Drink in the last couple of days!

Allison with the big sparkly eyes.....God bless Geoffrey for knowing each of those little ones name on the first day! PLease tell him for me that he has a very special heart and so do you!

Allison,
I can always count on your posts being informative, descriptive, emotional and funny. There are no words to describe wonderful people such as yourself doing what you do. I pray someday I will be able to go with Chris and maybe for even just a short while put a little spark in one of those beautiful childrens eyes and hope in their hearts. I did not know that my Chris had a little boy named after him. See it takes reading a girls post to find those things out. Thank you for all you do.