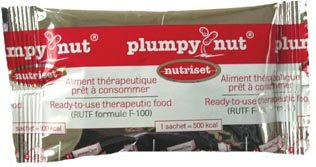 Have you heard of this stuff?
Organizations are giving it out all over the world to help reverse malnourishment in children.
Two to three packets a day provides all of the necessary daily vitamins and calories.
Steve has a case of it here and brought a package to dinner as a conversation-starter.
I opened it up and we passed it around.
It's delicious...
We had three little Kenyan boys with us and the youngest, Thomas, ripped the package completely open and licked it clean...yes, it's that good!
The cost is roughly $35 for a month's supply...enough to save a kid's life...
Can you imagine that? A life can be SAVED by $35!
According to Wikipedia:

In Niger,
where this product was also used, there has been a huge reduction in illness and
death from malnutrition. In 2005, the region that Plumpy’nut was applied had the
highest malnutrition rate in Niger. The region now has the lowest malnutrition
rate in the country. After widespread use, Plumpy’nut now treats more than
120,000 children (the UN estimates that 150,000
children under five are severely malnourished in Niger and a further 650,000 are
moderately malnourished).

That was on 60 Minutes. It is such a great idea/product

It sounds a lot like a Calteen (sp) bar from Mean Girls.

Maybe THAT'S my problem... too much Plumpy Nut!!!