When I arrived in Kitale, I purchased a school uniform to match the Oasis House Boys. I had yet to wear it...until today.

When we headed to Oasis today, for day 2 of subsitute teaching, I was all decked-out in Kitale Forest garb. 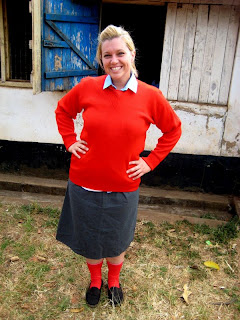 Steward could not stop laughing at me...especially because he had to tie my tie for me. 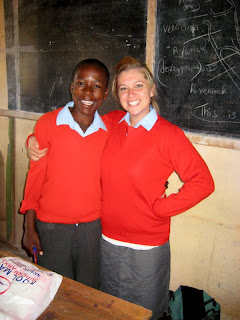 Can't you tell in his face? 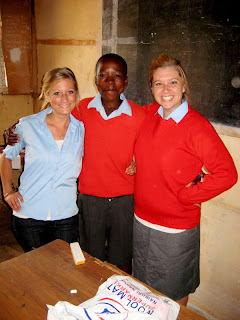 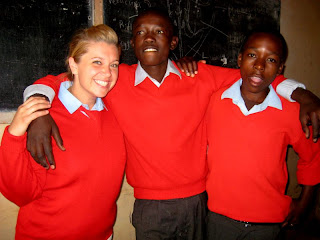 It was a great experience to work alongside of these kids in a totally different way...This is Joseph...and he surprised me today. I had seen his marks from last year and just assumed that he is not very smart. After today, I am convinced that he is really, really smart and just a meticulous worker. I told Geoffrey I think his low marks come from his inability to finish the tests in the given times...he is working to make sure every detail is correct so he only answers some of the problems...but the answers he gives are correct. Seriously...every single one. 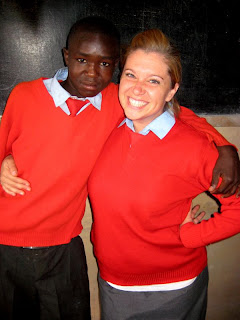 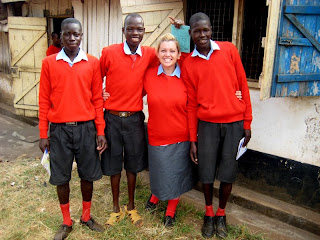 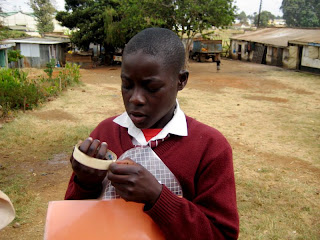 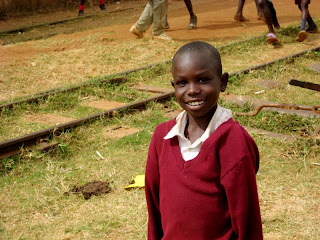 I changed out of my school shirt and found a lice (is one lice a louse?)...so Bram and Daina checked my head...false alarm, we decided the bug must have fallen in through the window on to my shirt on the table. 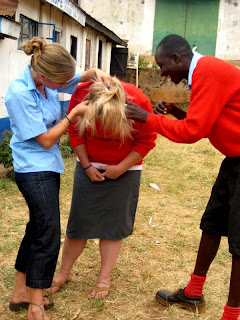 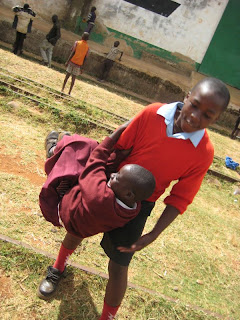 Joseph...who, I found out today, is actually named Godfree, but called Joseph in Kitale... 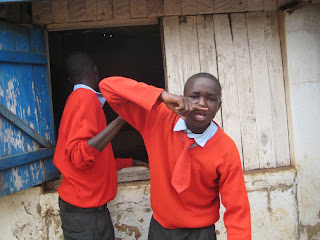 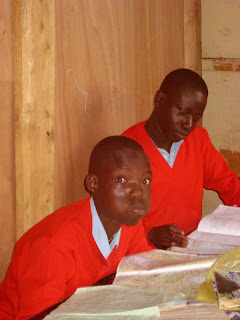 I taught Class 7 today...we began around 9:30 with Maths, starting from the very beginning and working through exercise after exercise...we worked until lunch...yep, 4 and a half hours of Math...the students were going stir-crazy. We worked on addition and subtraction of multiple numbers...and then word problems galore! (It takes a while to copy each word problem on to the white board...)

We broke for lunch and then came back to work on English. We 'popcorn' read a passage from their English text book (about football, lucky me), then answered some comprehension questions. From there, the textbook took a turn: they were instructed to take two sentences and make one sentence by adding to, too, but, or very. I took this as an opportunity to talk about conjunctions (which I tried to explain by talking about conjoining, saying "joined together"...two sentences in to one like two people connected as one...which lead to a Q & A about conjoined twins...and Joseph said "I have never seen one of them before!" I told him I would find him a picture.)

We also took a short detour to explain and understand the differences between to, too and two. (I told them that if they could learn this, they would be smarter than many Americans who have spoken English their entire lives, but still do not know when to use too and when to use to.)

From there, we were supposed to go to adverbs, but I didn't think they were ready to jump to adverbs without understanding the other basic parts of speech...so we spent a few minutes dicussing and listing nouns, verbs, adjectives and adverbs.

And then, finished with the differences in their, there and they're...and where, wear and ware. They were fascinated. I began to erase the board to write more and Moses said, "Wait! You are writing words that are very interesting to me, please don't erase yet!" Their homework is to write two sentences using each of those different homonyms (a term I didn't teach them...yet).

We'll take a break from teaching tomorrow so we can go swimming...but, I have to tell you, I would love to teach every day. I've really enjoyed watching these kids "get it"...and being able to explain things in a way that make sense...things they have not learned or things that were poorly taught. I'm not sure what this means, but it's not making it any easier to think about leaving in three weeks...I've cried everyday this week thinking about leaving these Oasis (house and centre) kids.

Still think you'll never use that English degree? I am learning from your posts!!
Don't you know the "conjunction junction, what's your function..." song? Please remind me to sing it to you when you get home!
Lice??? Ugh, yuck, gross, ewe!!!
Love the pictures!!!