I Only Know English

As we were saying our goodbyes at Oasis, a man came up to talk to us. He was making the sign of the cross...and folding his hands, miming prayer. I thought, maybe, he didn't know how to communicate with me since he could tell I don't speak Swahili, so I asked Moses to come over and ask him what he needed.

When Moses started talking, the man began pointing to his ears and mouth and shaking his head. He was deaf and mute. He continued to act out prayer and the sign of the cross...so I thought maybe he wanted us to pray with him. As we gathered in to pray, he shook his head and made a sign like a priest collar. He wanted a church.

I took out a piece of paper and had Moses write "come to church on Thursday at 9am". When the man saw it, he took the paper and wrote "I only know English". I was amazed. So I re-wrote Moses' message in English. The man nodded and gave a thumbs-up.
This began a short written conversation between he and I.

I asked him his name. He wrote Wilfred.
I told him my name is Allison.
I asked where he learned English. He said in primary school.
He said he attends a church in town that has 25 members, all of whom are
deaf. He invited us to come visit on Sunday at 10:30.
I wrote that we would try to make it, but he could always find us here (at
Oasis) on Mondays, Tuesdays, and Wednesdays...He nodded and gave another
thumbs-up.

He then acted out taking a picture...so we did. 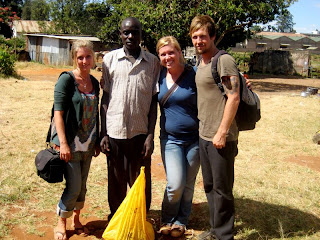 As he left, I signed the only sign language I know: thank you. And he returned the sign with a big smile...Again, an unanticipated moment that will stick with me for years...
Posted by Allison at 6:15 AM

That is so neat!!