Kaku-Might As Well Be Walking On The Sun

After the van ride, we were in Kakuma. We thought Lodwar was a small town, we had no idea what was coming. We are driving along, seemingly in the middle of nowhere and Ben says, "Driver...we're alighting here."

We jump out and head in to our hotel...after waiting a bit for the rooms to be ready (Chris swept while we were waiting) 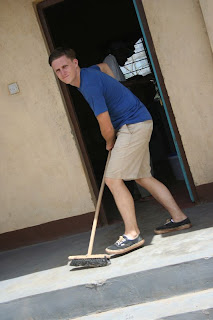 We settled in. We found our beds and rested for the afternoon. 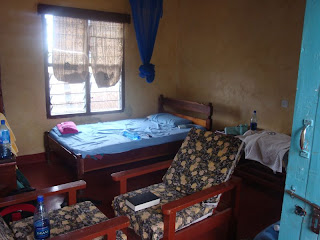 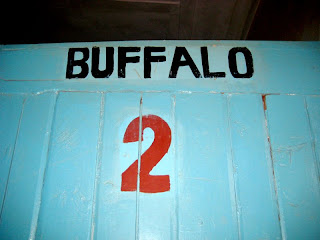 My net had a hole in it, so I did what I thought MacGyver might advise me to do: I put a band-aid over it. 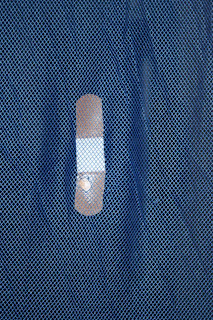 Before dinner, Ben took us on a boda-boda (bike-taxi) ride through the Refugee camp. Since it's U.N.-run, no photography is allowed, but I'm not sure pictures could do justice anyway.

Kenya is the place of refuge for people from almost all of the border-sharing countries: Rwanda, Sudan, Congo, Ethiopia, Somalia...and a few more that I had never even heard of. Hundreds of thousands of people have sought help and safety here over the years. Walking through the small dirt streets, any route you took would take you to a new community. It reminded me so much of walking through Little Italy or China Town in New York City: the way each cultural community bleeds in to the next without warning. I imagine the immigrants from Ellis Island who sought refuge in America to have found a similar situation to those in Kakuma. They are removed from their homes and find safety, but also discomfort being restricted to these small areas...they create new homes, communities, restaurants, churches...they make the best of what they have...

We met a man who was a high-paid executive in his home country of Congo (where they speak French, did you know that?!) and now lives on very little money in a very hot place...and he can't go home, it's too dangerous, and he can't move because he's a refugee...so he's miserable. We met another man who has been in the camp for a year...he's teaching English to the kids and saving what money he has so he can try to move to America or Canada. He's attending a church in the camp and "trusting God to provide".

It's all in how you look at life, right?

Ben was teaching the next day, so we relaxed in the morning. When he was finished, he took us through the local village. Again, they're not big on being photographed, so we just watched. We were propositioned by an old man...and he actually kissed my hand and then pulled me in a kissed my cheek...Ben kept apologizing for what had happened, but I was laughing...it was so unexpected and very funny.

The next morning, a woman from the local church knew we wanted to take pictures of a Turkana villager, so she brought a member of her church to meet us...

Daina was dressed in full-Turkana garb: the necklaces and shuka (wrap)...she wore it all day and was stared at, laughed at, questioned...it was awesome...and super hot all day (it was a consistent 90 degrees through this trip--7am, 10pm--all day every day), so I give her credit for being such a great sport. 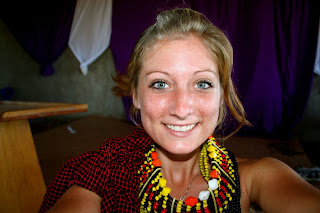 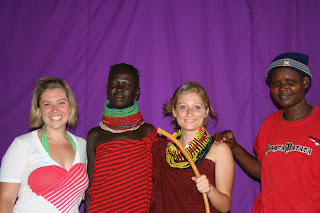 Then Chris put on the shuka...and Alice (the Turkana woman) loved it. 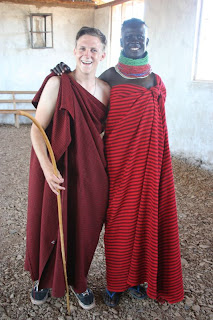 This is my favorite... 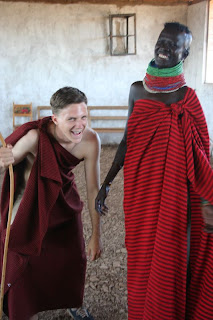 Isn't she beautiful? The beads are gifts from her father..they get a strand every time they do something good in his eyes...the more beads they have, the more valuable they are. This is her actual, every day outfit. We walked through town and saw Turkana people everywhere (men, women, children). We learned to say hello in their tribal language, but I was laughed at every time, so I gave up. Chris was well-received. 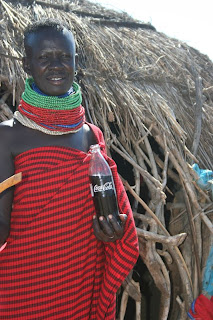 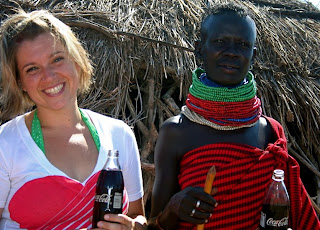 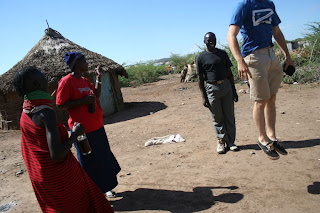 On Sunday, Chris had the opportunity to preach at a village church...here's the church: a few benches and chairs. 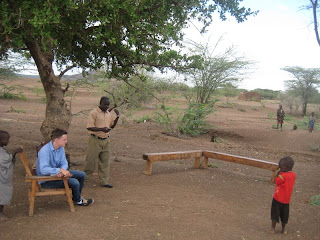 There's a family that helps at the hotel--their young boy, Jacob, wanders around and helps with odd jobs...he loved Chris. Look at how huge his smile is! 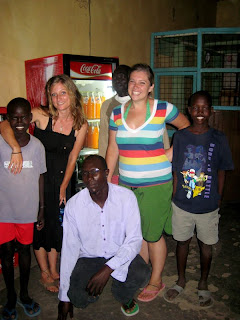 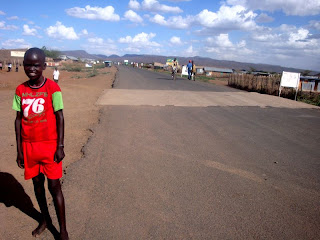