On Monday afternoon's, we head to Sister Freda's Cottage Hospital to help with some of the patients. We wandered for a bit, not really sure what to do. Then we ran in to a visiting Californian nurse named Graciella...She wasted no time putting us to work!

She brought us in to the room of a 17-year-old boy named Boaz. (Pause)

Boaz was born completely healthy, and then caught meningitis, which traveled to his brain and, somehow, developed in to (or caused him to be susceptible to cerebral palsy). Since then, he has been unable to walk, or speak. He lived with his mother for the first fifteen years of his life and moved in to Freda's a little over a year ago. He's been in this crib ever since. When Graciella arrived, she began some much needed physical therapy. She's been rubbing and stretching his arm and legs. She's also been holding him under his arms and walking him up and down the hallways teaching him to kick a balloon like a soccer ball.

(Play) So, Graciella brings us to Boaz. She takes him out of the crib and we got to walk him down the hall while he kicked the ball. I have never heard a 17-year-old boy squeal with more joy. I fought back tears the entire time...Graciella taught us to care for him so we can continue his therapy when she goes home next week. She said, as we massage him, we should pray for his healing because "doctors can only do this much (an inch), but God can do miracles...and if Jesus can walk on water, then Boaz can learn to walk."

Again, I fought back tears. She finished by saying, "When you return to CA, please call me and say, 'Graciella! You won't believe what God did! You were part of a miracle!" She's unbelievable. 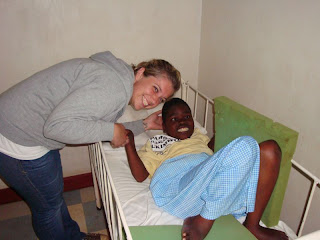 She then said, a woman gave birth this morning, around 11am. Would you like to see her and the baby? It was now about 3:30pm and Evelyn, the mother, was already off the IV and preparing to check out the next day! Caroline and Megan spent an hour or so rubbing Evelyn's legs and feet. Her baby, Michal (pronounced Michelle) was sleeping the entire time. 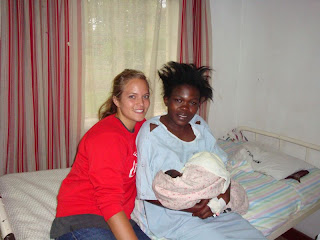 I am so, so excited to see what God does around (and hopefully through) us at Sister Freda's!
Posted by Allison at 10:27 AM

Wow. That's so crazy. It's very true. If Jesus can walk on water, then Boaz will definitely be walking in no time.

I'll be saying a bunch of Hail Mary's for him...
you guys are angels...

WOW!!!!
I have pictures with Boaz. He sang Jana Alayra songs with me and Moses and the other kids!
I will be praying for him!!!
And YOU! How fun to think of him laughing in the hall!
:)

wow. keep us updated on boaz.