There once was an orphanage called Mercy Home.
The man who ran it was really, really corrupt...so, a group of people moved the girls out of that awful place and in to a better home with our friend, Jacinta.

Now, Jacinta is in school, so a man named Joel and his wife are the guardians of the girls. We have seen the girls at their school, and in church...the first day we met them, they asked "Do you know Jim Dobbs? We love him! Greet him for the Mercy Girls."

Tonight, we had 10 of the 17 girls over at our house with Joel and Jacinta.

Steve took them on a tour of the compound. They played some horseshoes, baseball, soccer and ping pong... 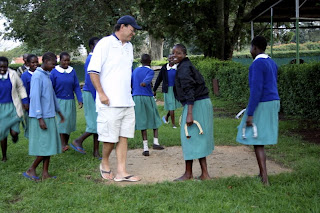 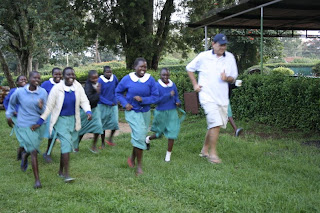 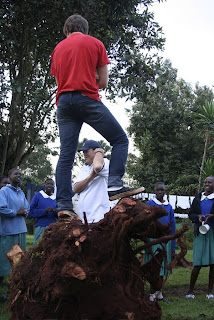 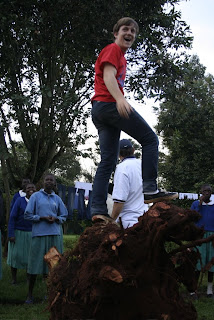 On the tour, we found a tub filled with painter hats...each girl was very excited to put hers on (backward, sideways, inside-out) and take a photo. 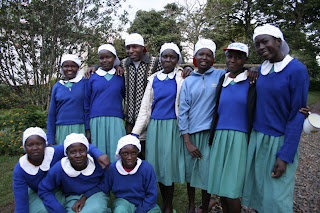 Steve also had a tub of donated Hurley shirts...so each put hers on...so cute. 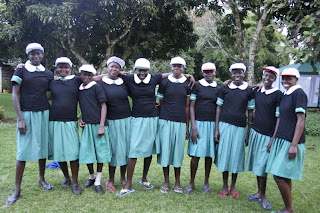 We had some chicken and fries for dinner (from the Kitale Club). After dinner, Steve and Chris showed a slideshow of the past trips...there was a HUGE cheer when the photo of Jim Dobbs came on the screen.

After a lot of laughter, it was time to go home...those girls were so sweet...
I know we'll be spending a good amount of time with them...and I know it will be great!
Posted by Allison at 11:08 AM

Love the day to day report. I'll be sure to send your blog address to Jim Dobbs too!
The hats are great. The shirts are great. YOU are great!
Love you Al!

Thanks for this! I've cried a couple of times now, thanks! Seriously, I can't believe that they still remember me... with all the muzungus they meet from Saddleback. I certainly remember them and a special couple of days I spent at Mercy. I thank God they are being taken care of so well. Mercy was a bad place. If you see them again, tell them I am planning on a January trip (hopefully). Give my special greetings to Josephine and her sister Anna. Blessings, Jim Dobbs