Kenya 2016 And The Lunch With Thirty-Something Chickens

When I was offered my job at Download Youth Ministry, I mentioned to my bosses that I would like to go to Kenya once or twice a year. They said, "That's great! Our wives would love to go, too!" Fast forward a few months and we purchased tickets for a quick trip in-between kid's graduations and Student Leadership Conferences.

We departed early on a Thursday morning--we arrived so early that the airport wasn't even really open yet!--ready for a very long day of travel. 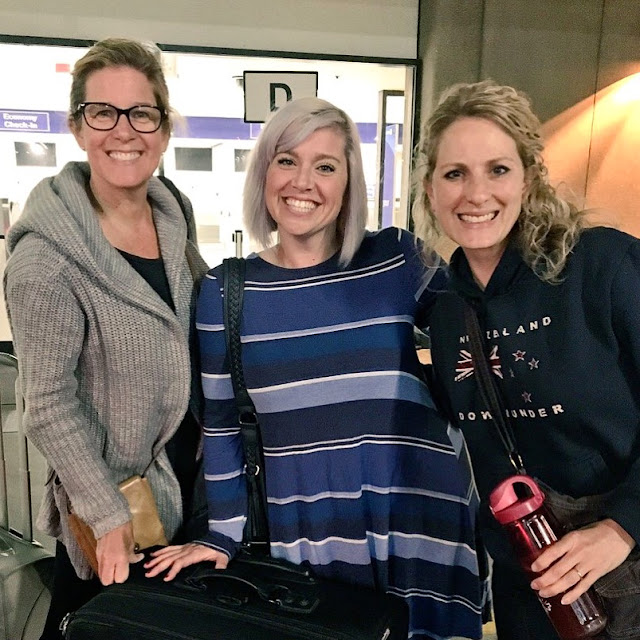 On Saturday afternoon (three flights, a good night's sleep in Nairobi, another flight, and a van ride later) we made it to Kitale! In the process, we met up with Cody and Taylor (who you'll see in photos) in Nairobi, were picked up by our friend Mike in Eldoret and taken to Sammy's house where we met up with the half dozen college students spending pieces of their summer in Kitale. (You'll see them in pictures, too!)

I, of course, couldn't wait to get to Precious Kids Center to see Suzie, and the team--though dead tired--was so gracious to let me take them on a crazy detour before dinner.

Look at her! She's getting so big! And squirrelier than ever, if you can believe it! 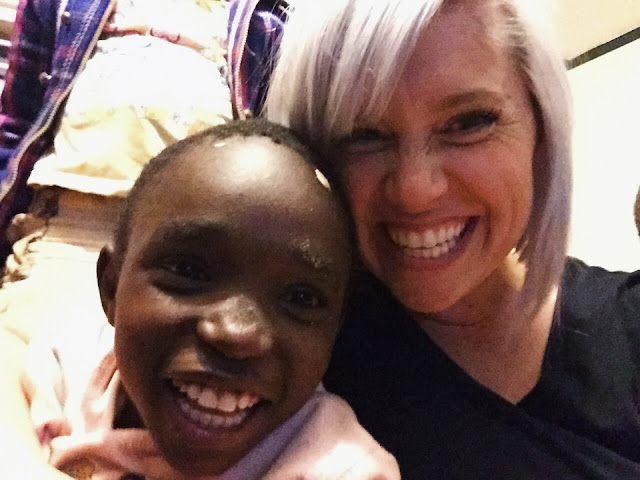 We had a delicious dinner of Indian food at my favorite restaurant in town--I'd had dreams of this place nearly every night for the week before we left! I couldn't wait for garlic naan and chicken korma!--before calling it a night. (Cody and Taylor had been up for nearly two days straight!)

Fortunately, we could ease our way into Sunday. Since we didn't have to leave for church until about 10am, everyone slept in and took their time getting ready. I wanted to make sure they had the full Precious Kids Center Sunday experience--and they wanted to see Sammy's boarding school kids--so we loaded up two vans with kids--plus a third car with Americans--and headed to church. We were, obviously, a spectacle rolling in. 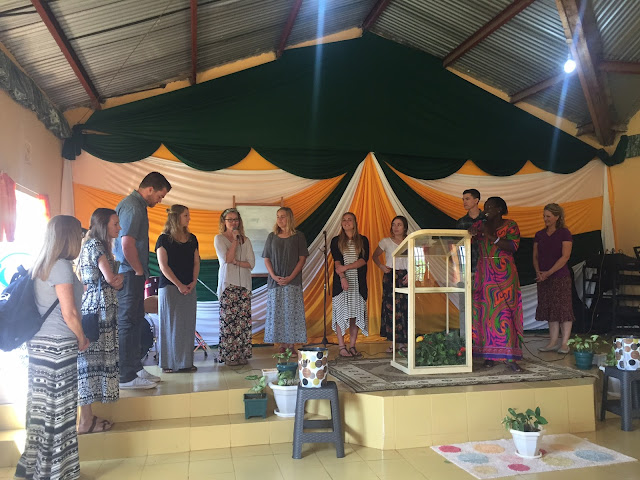 Sammy surprised me by bringing Suzie (who doesn't get to come to church often since she's such a handful). During music, she was so excited that she would switch off jumping up and down and running back and forth across the back of the church...it was hilarious and exhausting just watching her! Finally, one of the greeters grabbed her hand and let her jump and spin with him for a good five minutes. But when it came time for the message, she wanted nothing to do with sitting in a chair. I held her in my lap and tried the old go-to tricks: my phone camera, a piece of dental floss (she loves to wrap strings around her fingers), but nothing worked quite like this tiny mirror. She played with this thing for nearly an hour! I could not tell you what the message was about because I was having such a great time watching her! 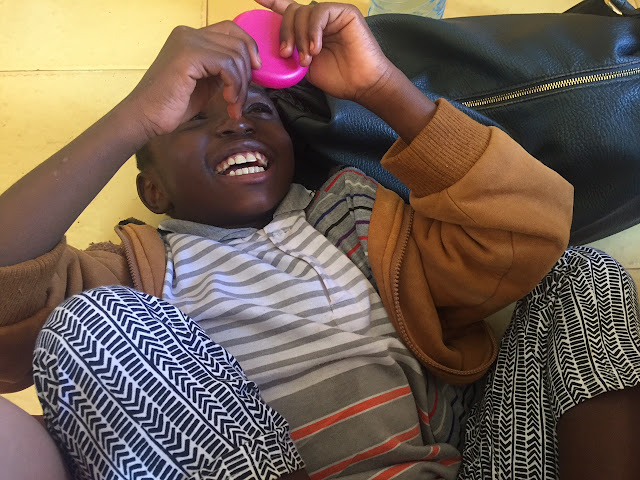 After service, I made my way out to the vans to corral my very hungry people, but I didn't want to rush out, since this was our only Sunday in town and would be my only opportunity to see these friends and hear about their lives.

Veronica stopped me to say her business is going very well! She's been frying fish and selling them to passersby on the road near her home. She's done so well that she's even upped the amount she's purchasing each week! Also, her two boys are getting so big! (Though still uninterested in/afraid of taking a photo with me.) 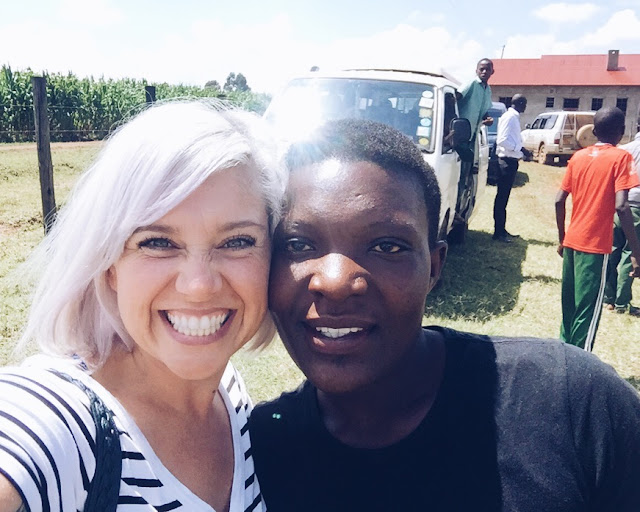 We loaded up two cars (having sent Sammy on ahead to make arrangements and place our gigantic order) and headed to town for lunch. 30-something orders of chicken and fries!

Suzie is a girl who knows what she wants. And what she wanted was food. Since she typically stays home on Sunday mornings, this was a late lunch for her--and though she couldn't tell us in words that she was hungry, she definitely showed it! Needless to say, we made her a plate as fast as we could! 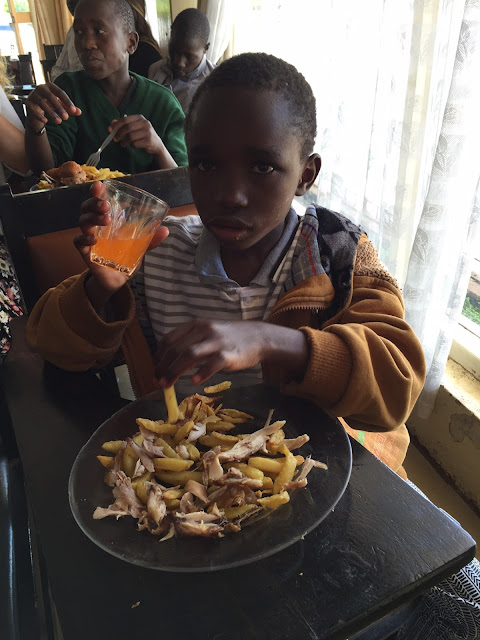 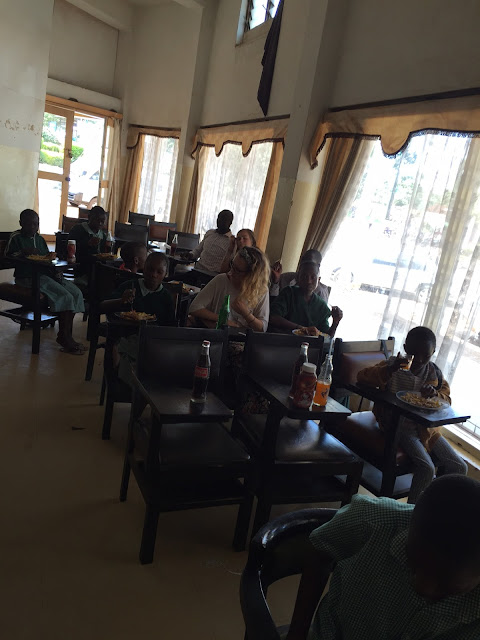 After lunch, we dropped most of the boarding school kids back at Greenfields, changed out of church clothes, and loaded up the van for a trip down to Shimolatewa slum. 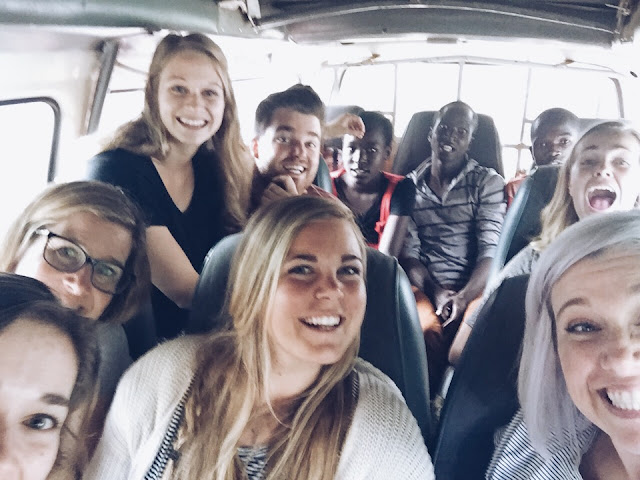 Many of the families we've built relationships with over the years are from this part of Kitale, so we try to visit at least once each time we're in town. Many of the college students staying with Sammy hadn't been yet, so we had to take a walk to the famous Shimo bridge!

Taylor stopped to play with some kids 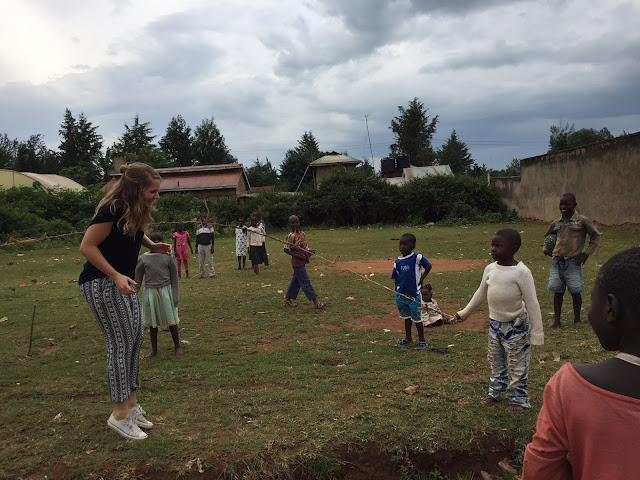 The families we wanted to visit on the other side of the bridge were too far to walk to, but I couldn't pass up the opportunity to take everyone to the middle of the bridge, to show water sources old (dirty) and new (clean). Plus, climbing the steep and clunky stairs gives a deeper understanding of the effort it takes for families (mostly mothers and children) to carry that clean water back to their homes. 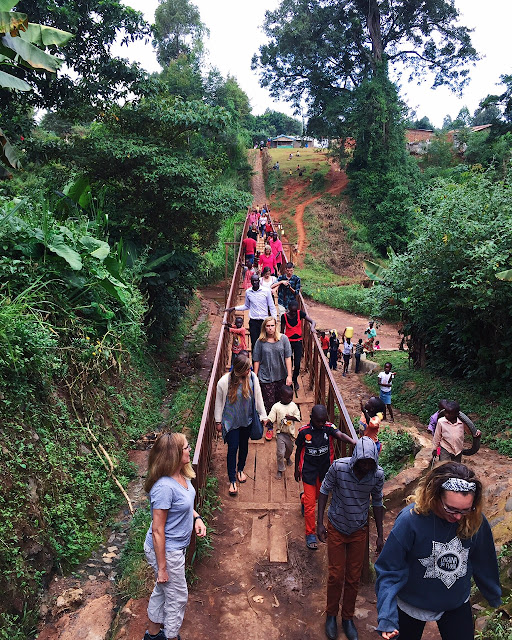 We ran into a few kids Sammy knew from years ago. And even saw Newton, one of the kids who stays at Sammy's while his mom is in school, but goes home to be with her on weekends and holidays. 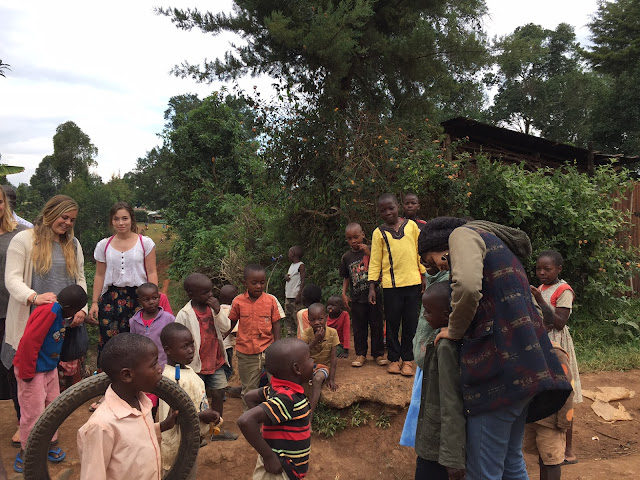 We hopped back in the van and drove to the homes on the far side of the slum. When we arrived, Cody was greeted in the sweetest way by Esther, Jennifer and Celinah's mom--whom he's known for years--she ran toward him on the dirt road with her arms open and a huge smile on her face. He took off running toward her and they met in a big embrace. They walked to her new home and he asked her questions about her life and five children while we all smiled at neighbors and tried to convince Lauren to pick up a very protective (and angry) mama chicken.

As we waited to head home, Brittan played games with the neighbor kids. 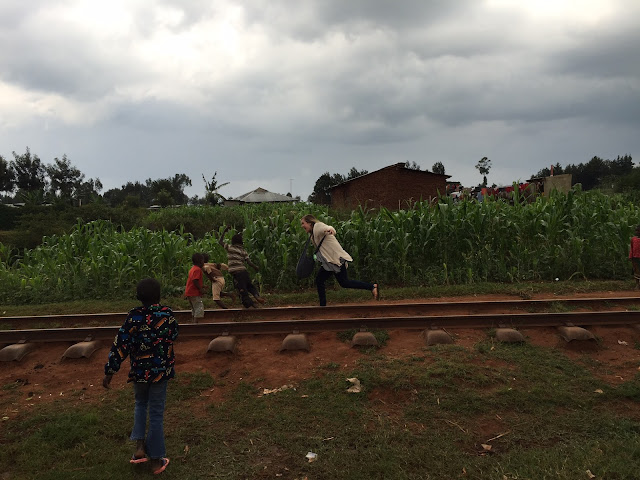 Sunday night is chapati night at Precious Kids Center...so I knew exactly where I wanted to be. As usual, I was surrounded by children with big smiles and sweetly longing eyes as I ate my dinner. They'd finished theirs a few hours earlier and, though they were plenty full, would happily overstuff their bellies with an extra bite or two of chapati. I get it! That stuff is delicious.

We sat for another half an hour or so as they watched TV and we took some pictures. 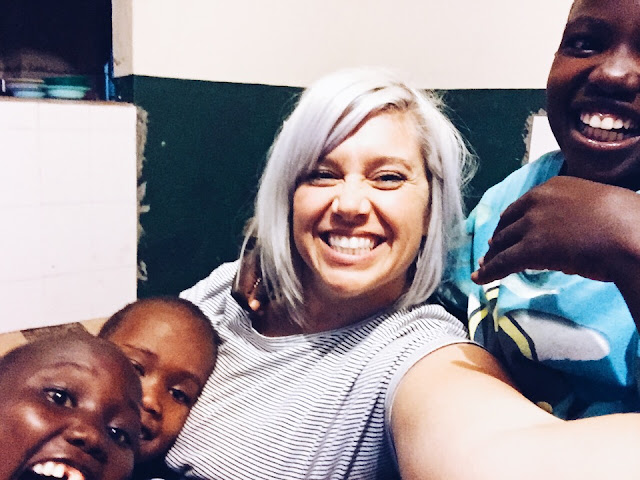 Since Sammy moved into the new house this year, about ten new children have moved in, too. (Many of whom you'll see in photos throughout the rest of the trip.) I did my best to learn their names and hear the stories of how they came to live at PKC...but even I was a little overwhelmed trying to keep them all straight on that first night! I knew it had been a long day, so we headed home early and climbed in bed to rest up for another full day Monday!
Posted by Allison at 11:33 AM

LOVE how much you LOVE this! :)
I remember walking on that bridge with you in 2008.