What Began As An Average Saturday...

One of my favorite parts of living with Sammy is getting to tag along on the adventures of her day. Each morning, we start at the kid's house and then, depending on the 'schedule' figure out whether I'm along for the ride or forging my own way for a few hours before meeting back for dinner at the kids. (The house moms know that cabbage is my favorite and have started to make sure there is a little to go with my ugali every night. They are the greatest!)

This particular Saturday morning*, the plan was to hang out at the kids house, take Japheth to visit his mom (who is battling cervical cancer) and then enjoy a few hours of napping (and a bit of laundry) before dinner. It was going to be a "lighter" day.

The afternoon did not include naps...but what did take place was so much better.

{Sam, Moses, Bram, Allan, and Male lounging in the shade} 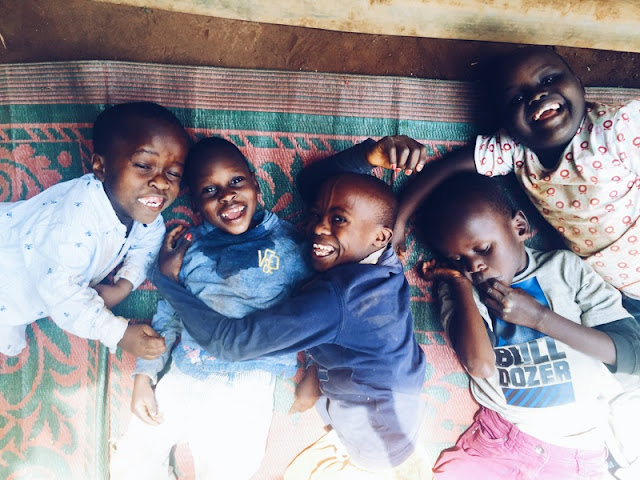 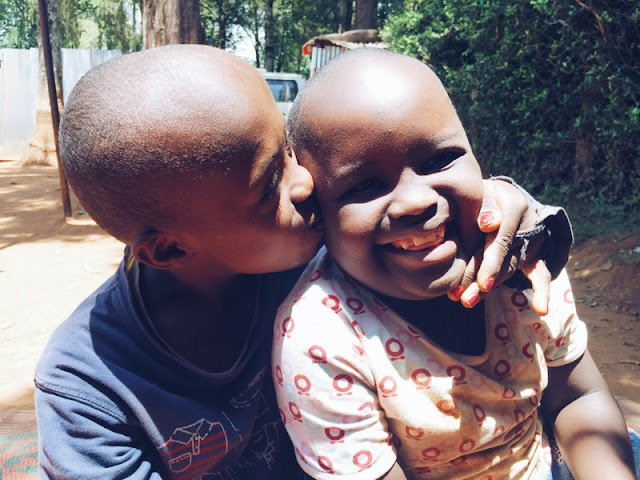 We packed up Allan (with his wheelchair) and Japheth and drove out to see his mom. They sat and talked for a bit, while I did my best to translate in my head based on context clues and the few words I understood for certain and, as we were getting ready to say our goodbyes, Quinta walked in and plopped herself as close to Sammy as she could get.

Quinta lives a few doors down from Japheth's mom and, despite the difficulty she has walking without falling due to her cerebral palsy, she always, always comes down to visit Sammy when she's in the neighborhood. They snuggled up on the couch for a few minutes and Sammy mentioned that when the new Precious Kids Center is open, she would love for Quinta to move in.

Quinta looked up at Sammy, her face a mix of emotions: her smile displayed excitement for the future, but the tears in her eyes gave away the heartbreak she felt that her rescue would not happen today. 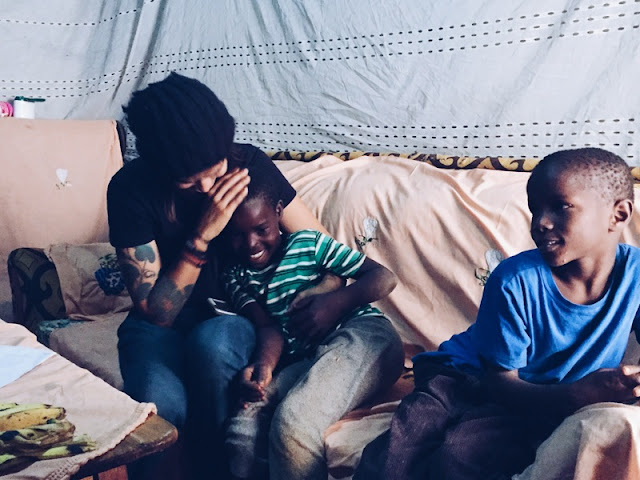 We climbed back in the car to go to lunch and the look on Sammy's face told me that wouldn't be the last we would see of Quinta that day.

The team worked to get Allan up the front ramp and up the two giant ramps that lead to Ruby Deli. The boys played in the practically empty second floor while we waited for our lunch to come to the table--Japheth would get a running start behind the wheelchair and then, holding tightly to the handles, slide behind the chair as far as they could before stopping. More than once, he slid underneath the back of the chair and would look over at us with a slightly embarrassed side-grin. 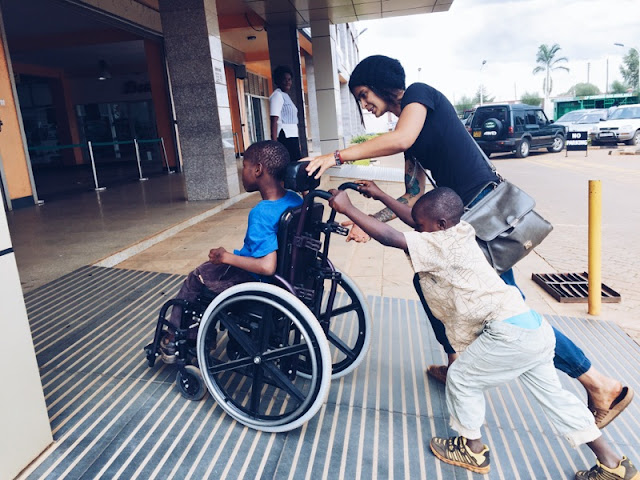 After lunch, we dropped the boys back at the kids house and Sammy went in to investigative mode--questioning the house moms about sleeping situations: were there any open spots for girls on the bottom bunks? As soon as she asked this, the moms knew. "Who is she?" They all asked. One mom jumped straight to, "Just bring her!" I pulled out my phone and scrolled through to a few pictures I had from our visits with Quinta. The moms immediately said, "Yes! Bring her here."

So, Sammy and I got back in the car and drove to town where Sammy bought this sweet girl two bags of belongings: jeans, shirts, skirts, and her first pair of shoes!

Watching a child who has been the family outcast--locked outside all day, and fed only the scraps--receive a bag of clothes that are just for her is something my heart will never grow tired of. (This outfit she's wearing is the nicest dress she owns--having been bathed and dressed for a visitor.) What an amazing moment Sammy created for this girl. And it was about to get more exciting. 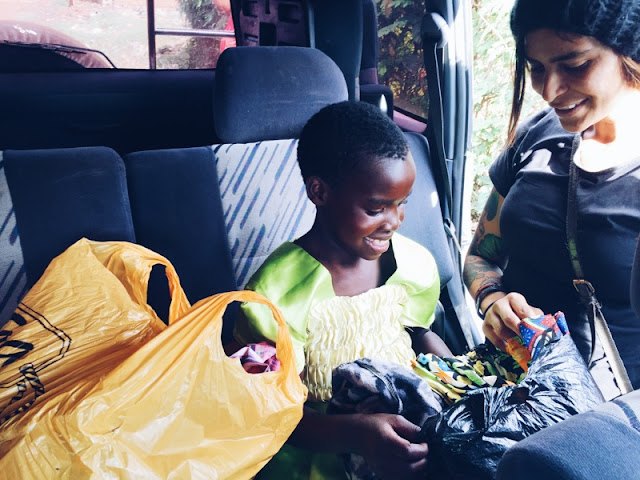 Sammy spoke with Quinta's mother for a few minutes and then everyone hopped in the car to take Quinta to her new home. Her mother came in to meet the staff and make arrangements to fill out the proper paperwork to make things official before saying goodbye to Quinta and making her way back home. Quinta was quickly swept-up by new friends--Maureen, Linah, and Zippee--to tour the house, see her bed, and then to play out front. 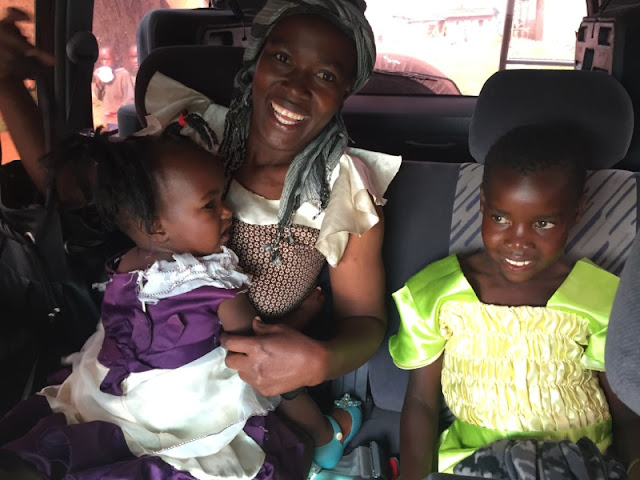 Meanwhile, that morning Sammy had taken Victor to the doctor where he had been diagnosed with a small bacterial infection. Rather than make six trips back and forth to the hospital, she was instructed on how to give the injections at home. She's a real bad ass. 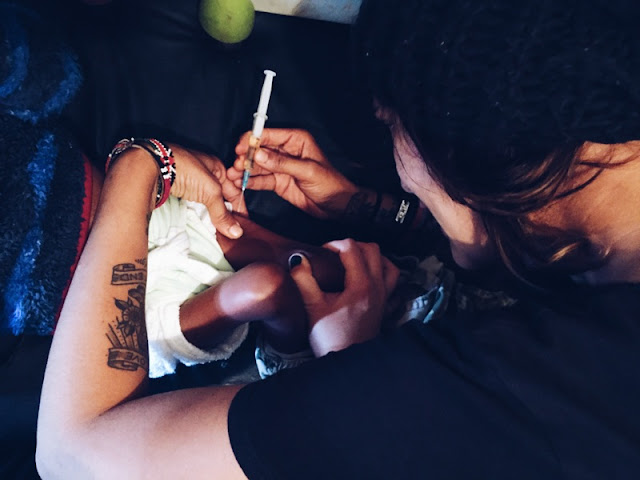 When we came back outside, we found Quinta fitting in with the crew nicely. Someone had brought her a chair, so she didn't have to balance on her bad foot or dirty her dress by sitting on the ground. Japheth, an old neighborhood friend, sat next to her and, later, brought her a glass of water. 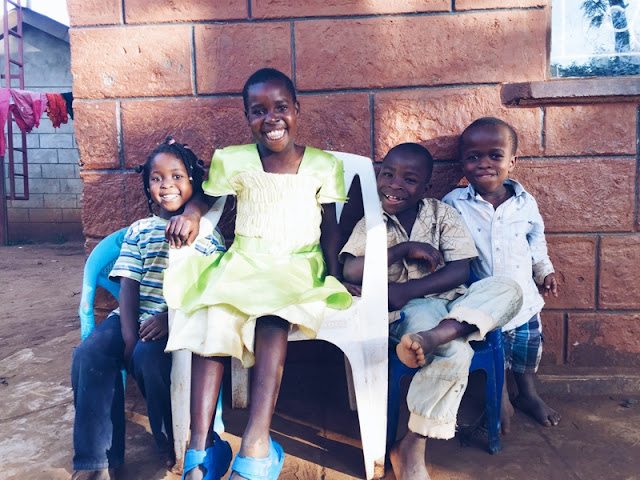 One of the most heartbreaking pieces I'd heard of Quinta's story is that her mother would bring her outside on Sunday mornings, lock the door to the house and take the rest of the kids to church. So I was beyond excited to be part of Quinta's first church experience...especially with seventeen other crazies.

Even Moses got to join us that morning! (In OVERALLS no less!) 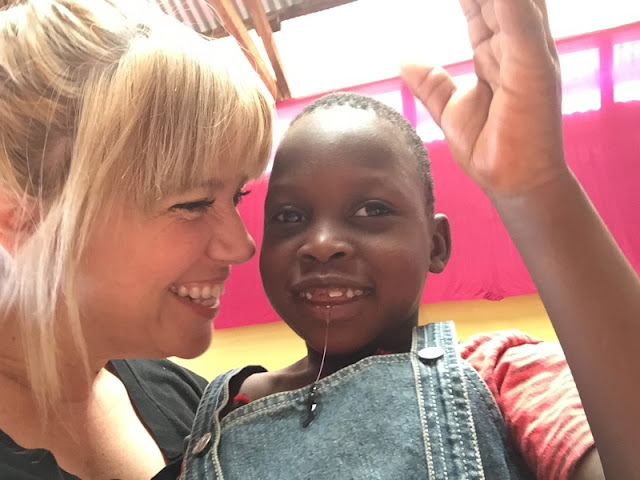 Maureen and Quinta shared a chair between me and Sammy and whispered to each other giggling a bit during the opening songs and announcements. 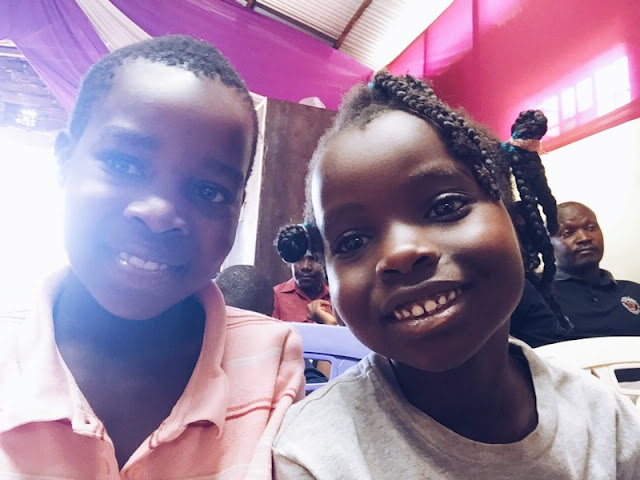 Not quite ready to venture off to Sunday School, Quinta stayed in the adult service with us. She kept Linah's sunglasses too--but wasn't too sure how to wear them. 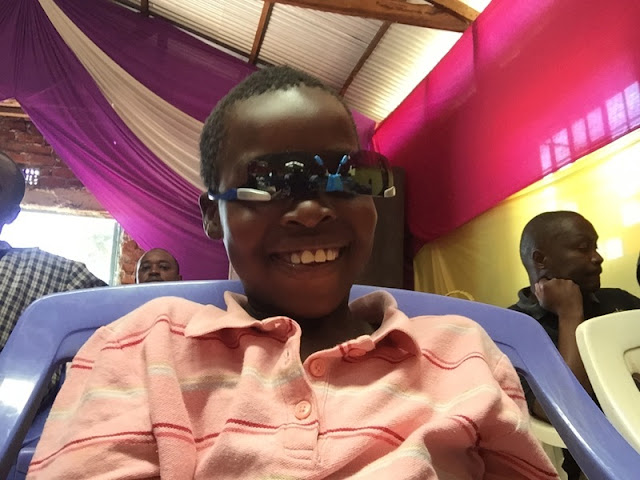 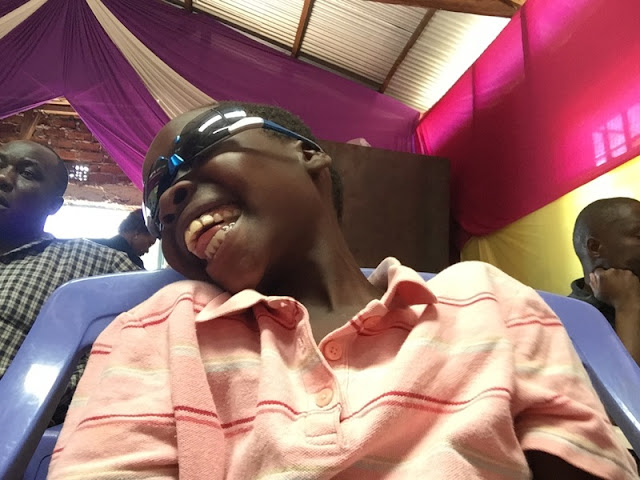 On the way home, Sammy whispered, "Let's take this kid and her crew to lunch in town!" So we unloaded the van-full of children, caught a few to get in the new car and drove to town. 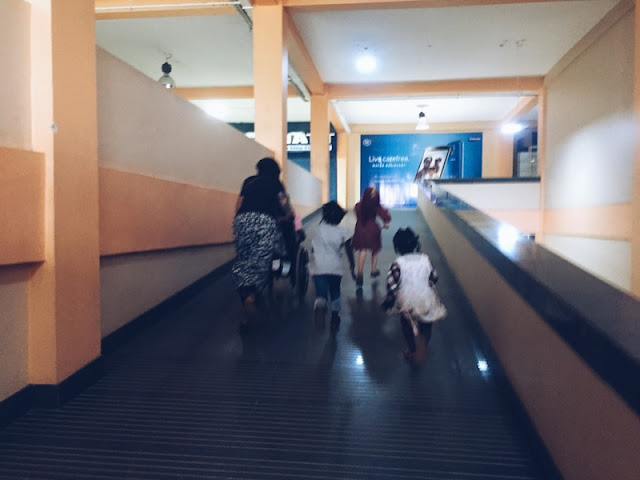 The girls ordered chicken and fries...and, all but Linah ordered a soda. Linah wanted milk instead. 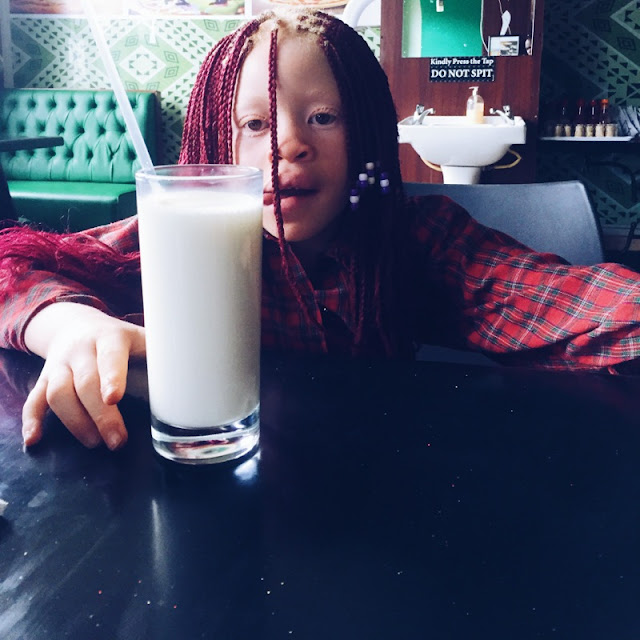 It's been really cute to watch Quinta learn Sammy. She's been watching her and growing more and more confident in making the space her own--talking louder (and more) and teasing the other kids and even making jokes to Sammy about how "two white people at this house is enough!" 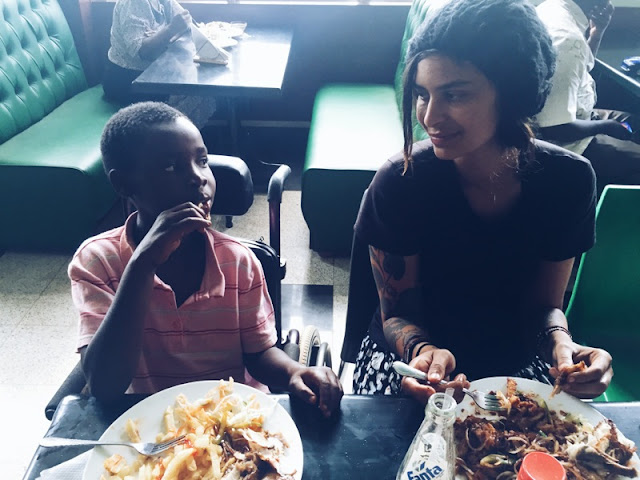 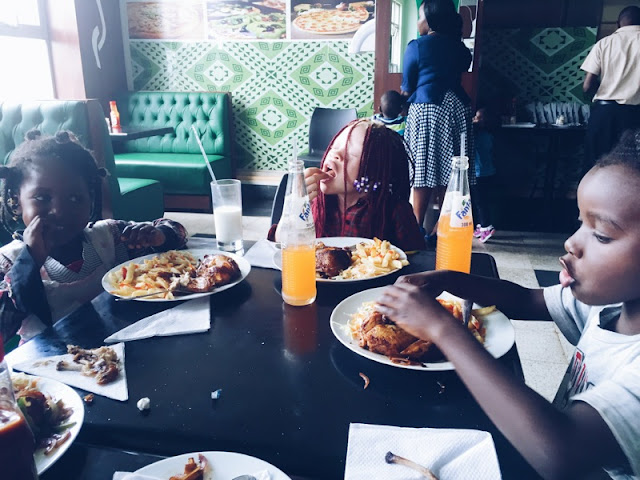 Before we left the shopping center, we decided to give the girls one last surprise: a ride on the moving sidewalk. Zippee absolutely loved it. She was a little nervous the first time, but then excitedly jumped on to ride a second time before we could stop her! 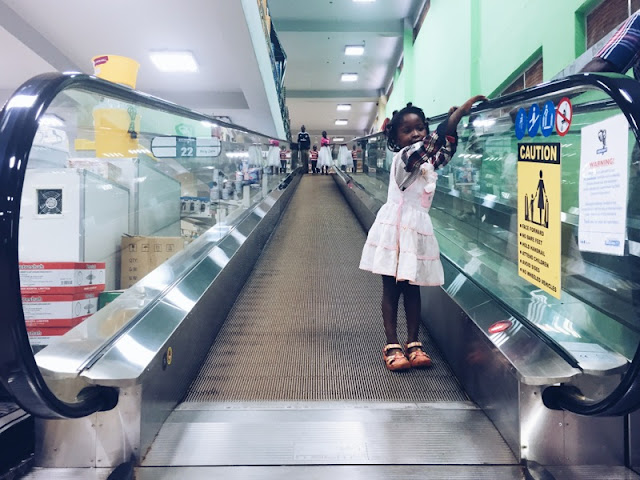 She sat in my lap on the ride to and from. That afternoon I asked her how old she was. She said, "Wait!" ran over to her mom and whispered, "How old am I?" Then ran back over to me and yelled, "FOUR!" She's really, really cute. 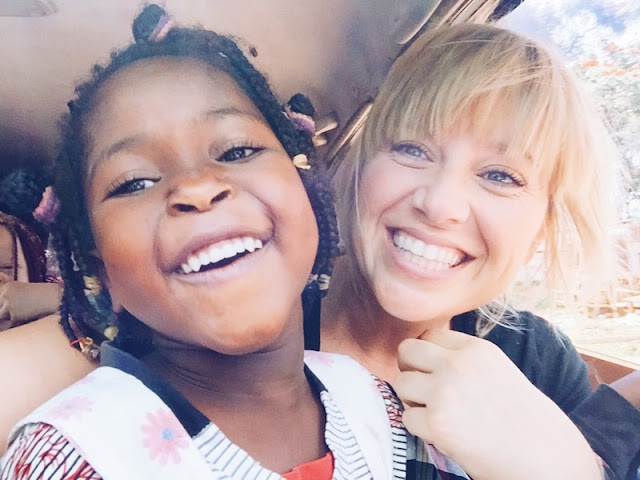 The next afternoon, I painted Quinta's nails for the first time...about a week later, she slept over at our house and had eggs and watched a movie the next morning. She will not leave Sammy's side!

This little girl's life is forever changed because of the activities of that weekend. I can't wait to share more about her growth and watch her thrive in this new environment!

*This all happened a few weeks ago, but out of respect to Sammy, I wanted to let her post the announcement first. You can read her blog introducing Quinta here.
Posted by Allison at 9:33 AM