We Swim On Thursdays

If you're new to my blog, here's what you've missed:
Each Thursday we take 7 little kids that live at Sister Freda's Cottage Hospital swimming at the Kitale Club. At first, the kids were fearful of the water, but now, after about three months of weekly visits, they jump right in.

Sister Freda bought each of the kids a new outfit to "brighten up their day". She also said they would be worn today and then "washed and saved for Christmas". Here they are...from the left: Morgan, Joyce, Esther, Elia (in the jersey), Moses and Jaclyn (nicknamed Dot because she's so tiny). 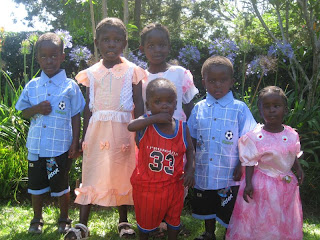 Joyce is afraid we will let her go in the big pool, so she holds on with a death-grip 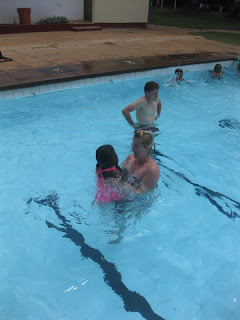 Dot loves to be thrown in the air 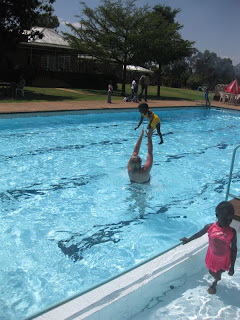 Seriously...she laughs and laughs. When I tried to put her back in the baby pool, she cried (which she never does)... 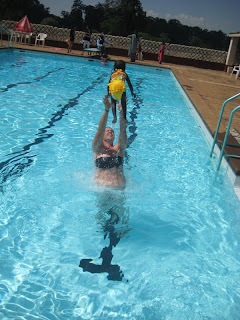 Esther is still afraid of the big pool, though she will not be the only one left behind...so she'll go to the big pool for a few minutes--never jump off the side-- 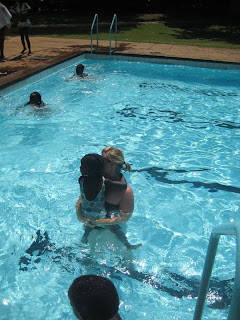 and then lounges in the kiddie pool for the rest of the time. 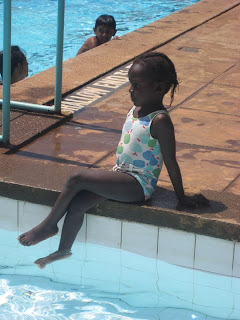 I took Gayle and Elia in the big pool yesterday. Each by force. Each screamed the entire time I had them in there...Both times, all of us laughed at their panicked screaming since it immediately stopped when they were on the cement again. 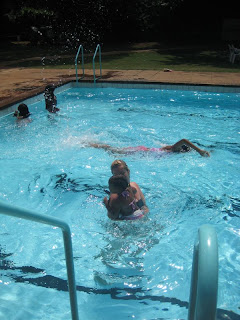 This is Morgan. Morgan jumped in to the big pool, by himself, yesterday. We were all out, drying off and he, evidently, was not done swimming yet...Luckily, there's a bar on the side of the pool that he was holding on to...and Chris saw him jump and grabbed him, but we'll have to keep a closer eye on him from now on. 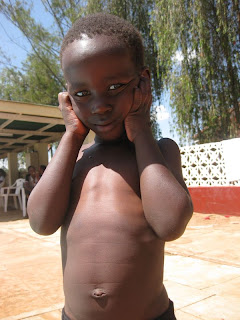 As much as I think he's a stubborn alien-baby...he's kinda cute sometimes. 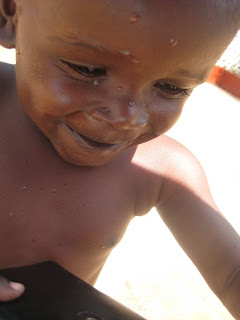 We finished off the morning with 12 plates of French Fries and 10 sodas...then, when we went back to the hospital, they had made lunch for us...so we each ate another plateful of food (though we weren't hungry)...and then Daina, Lilac and I took a nap on the couches while the boys walked around the hospital compound.

Swimming, fries and a nap...what a rough day
Posted by Allison at 8:53 PM

So cute and so fun. I love their new outfits. Thanks for finally telling me that Jaclyn IS Dot, and why!
They will remember these pool days forever.
So will you.