Yesterday felt like a day at work in America: full of fun, but also very busy.
Chris, Daina and I met up at Oasis, but the split-up for a few hours and re-connected at Oasis with great stories to tell.

First, the man who aided in the theft at the boy's house, Odilo, showed up at Oasis to meet with Geoffrey. They spoke for a while, Odilo's version of the story was disproved by a few stories from the boys. Since the man would not cooperate, the police were called and Odilo was arrested shortly before lunch. This guy has been party to the delinquency of three of our boys, so I was very happy to see him facing some consequences for his actions.

Daina took a few of the Oasis boys to Sister Freda's medical clinic in the slums of Kipsongo. I know she will post about it, including some (probably) incredible photos. You can check her blog here.

One of the Oasis Staff, Patrick, was in the hospital with stomach pains (at first they thought it would need surgery, but turns out it is an easily treatable infection, so he will be home today or tomorrow). Chris and Geoffrey went to visit him. I'm sure Chris will post on the district hospital, about his visit to the police station (he was not arrested--no worries), and his quick stop in Kipsongo (like I said, busy day yesterday)...check his blog here.

I began the morning with a visit to town to buy some gifts for the families we will visit tonight, in Shimo La Tewa (the slum near our house...the name means "the snake pit"). I took 3 Oasis boys with me to the wholesale shop where we wandered through three floors of palates filled up to the bedding section. We bought each of the ten families 2 blankets, 2kg of maize flour and a long bar of soap. (I'm sure photos will be a-plenty after tonight).

The boys were so patient as we waited for the goods to be calculated by Francis, the employee who was beyond helpful (and even re-priced some of the things we'll need for the boarding school kids--which should save Oasis tons of money). Francis gave each of the boys a water bottle--customer service--and even Martin said, "Whoa. This guy's good."

To reward them, we bought some ice cream. Martin quickly asked the man how much each cone would cost and then told me 150 shillings was too much to spend on ice cream. Paul pointed to the cone and said, "I can eat this part, too?" When I said yes, he immediately went for a bite at the bottom of the cone. I had to stop him and explain that he needed to eat the ice cream first...

Then Johnstone screams, "we should take a picture!" and jumps up to stand between his brothers (left: Martin, right: Paul)...I told them the strawberry ice cream made it look like they were wearing lipstick, but they didn't think that was very funny. 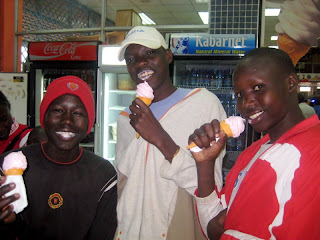 After the ice cream, Martin said, "That was very cheap, and very good". Then he paused and looked at me, "Cheap means a lot of money, right?" and I explained cheap means little money, expensive means a lot. He quickly revised his statement. "Oh, then this was very expensive, but very good." As we walked back to Oasis, I explained that ice cream shops in America have 31 flavors to choose from, but they are also expensive: about $4. Johnstone (fourth in his class) says, "That's like 375 shillings!"

Once the afternoon was complete, we met up at Oasis...Daina and I took Johnstone, Moses, Steward and Esokon to the store to complete the replacement of the stolen goods. We got everything (including boxers and socks) except for one pair of shoes which we will hopefully get today. Daina ran to the other store for Thanksgiving necessities while I paid for the clothes.

In about 3 hours, Thanksgiving was ready: green bean casserole, sweet potatoes, mashed potatoes, homemade (from scratch) pumpkin pie, Kraft macaroni and cheese (a going-away gift from Wildside), chicken (a turkey would cost 5000 shillings) and rolls. Geoffrey and Olivia came to join us. I held Charlotte (5-months) the entire time (she fell asleep in my arms). Alex, our new Canadian friend, shared in American Thanksgiving, too. We laughed and joked for a few hours (and helpings of food). When they left, Chris and I did the dishes and Daina read Harry Potter (so we can watch the 4th movie soon).

What a long, memorable day. I was trying to think of specific memories from my trip so far...and the list is packed with small moments that have made a big impression. I am so thankful that I was able to come here. I'm thankful for the dozens of people who made financial sacrifices (big and small) to help make this trip possible. I am so thankful for the hundreds of people who are praying for us while we're here...I'm thankful for the organizations here that are working, everyday, to change the lives of the next generation of Kenya...
Posted by Allison at 9:04 PM

Happy Thanksgiving.
I was at work from 8am to 8pm...but it was fun too. And I got to eat from the buffets afterward...yum!
Your dinner sounds great. Your day sounds like a week!
Your life sounds like a movie.
I love you.
Grateful for all you are doing...