Playing In the Pool

This morning, we took a group of kids from Sister Freda's to the pool. (Now, I'll be honest, I wanted to spend the morning reading my book and laying around...and decided to go at the last minute.) I'm so glad I did!

Two girls who are staying at Sister Freda's packed bathing suits and extra clothes for the kids...we just went along (and, luckily, Daina had her camera). They suited up and headed out to the baby pool. 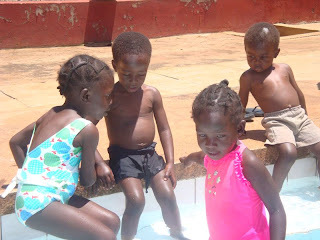 Joyce laughed for at least 25 minutes straight...just laughing at the joy of being in the water: 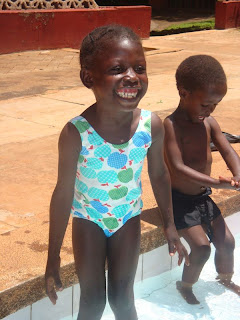 Jaclyn is so tiny that she was carried the entire time, but she loved to be dragged around the pool. 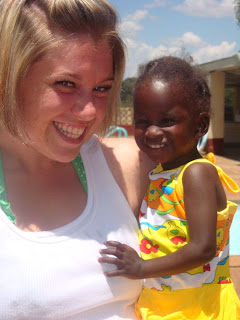 Daina and Elia partied on the side for a bit and then headed to the big pool...he LOVED the water: 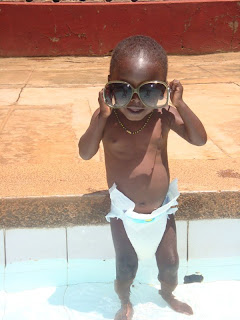 Moses sat in the water for a few minutes and then got out to watch from the side-lines...though he was still in to repeating everything I said to him (which was "Come here!" over and over again): 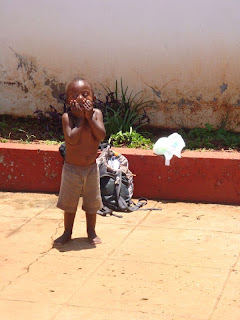 Esther was pretty content to hang by herself. Anytime I would splash her, she would giggle and run out of the pool...Anytime one of the boys would splash her she would yell "That's enough!", wipe her eyes and splash him back. 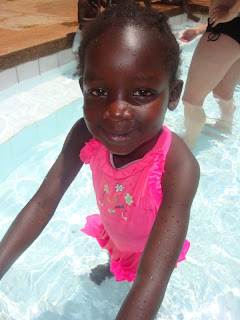 Morgan has the sweetest little demeanor and the worst bladder control of any kid ever. He peed his pants at least four times while we were there...including immediately after putting his suit on...but it's a very cute, tiny suit, so it was funny, not gross. 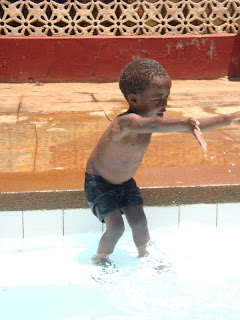 Elia gave up his suit so Moses could swim...but then, the diaper was a little too heavy for his small body. 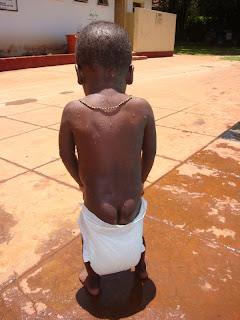 Speedo (who works at the Kitale Club) took our orders for chips (fries) and cola. So after the kids were changed out of wet clothes and in to dry (well, all but Morgan--his pants were super wet--but not from the pool) we sat down to eat.

Each child (somehow) ended up with a plate of fries to himself. And, these tiny bodies can fit a lot because we hardly took any home... 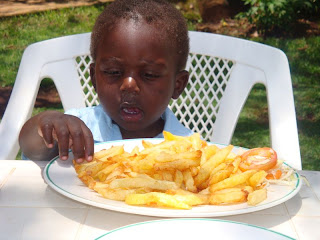 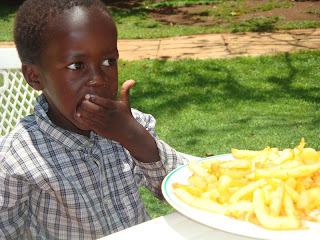 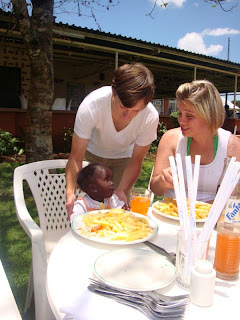 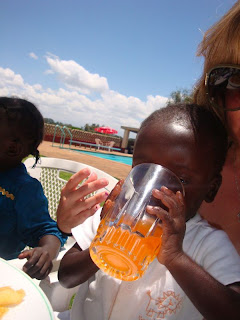 It was incredible to watch: tiny hands stuffing mouths full of food, drinking from bottles that were bigger than their heads...Moses dropped a fry (out of his full mouth) in to the soda bottle. He tried to retrieve it with every sip, but could not get it until the very end...it was really funny to watch. Everytime I would yell "Mos-e" he would look at me and make this face. So cute. 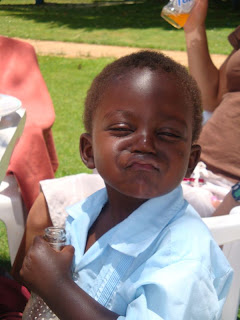 ok, kid with his buns hanging out... adorable. Kid with his sunglasses on in his diaper, precious.

I wish I was there!

those kids are sooo cute!!!

i love these photos!

Man, those kids are adorable!

Love you sooooo much!! Thanks for sharing your life with all of us back home!! I can only imagine how much those kids appreciate you being there! You have already changed their lives!!!!
Soooo cute.
Isn't that one little girl Dot?