We had a very special Easter in Kitale this year! We slept in and took our time getting ready, then drove to Precious Kids Center to pick up Stellah and Michelle for a day at Phoebe's parents' house in Kapomboi!

Phoebe is the social worker at Precious Kids Center. She's amazing! Very organized and on top of things...she is an incredible help to Sammy and the house moms. While we were in town, she was so helpful to us as well. (Plus, she's really fun to have around!)

It was a beautiful, warm Sunday morning as we drove out of town... 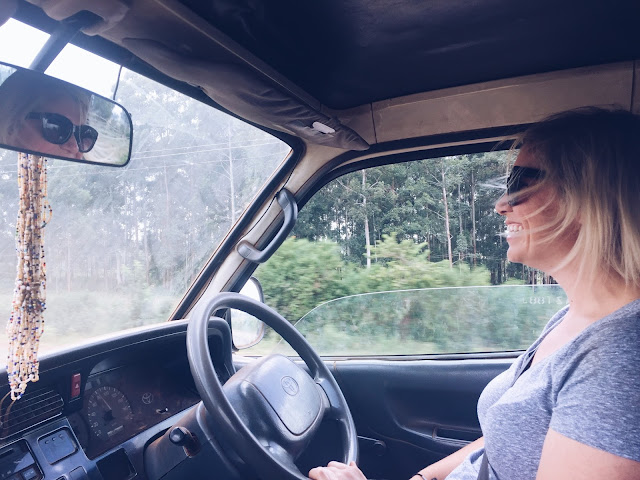 Phoebe's parents live in a village about 30 minutes outside of Kitale. After about 15 minutes on the tarmac road, you turn down a dirt road and drive through this to get there. It's gorgeous! 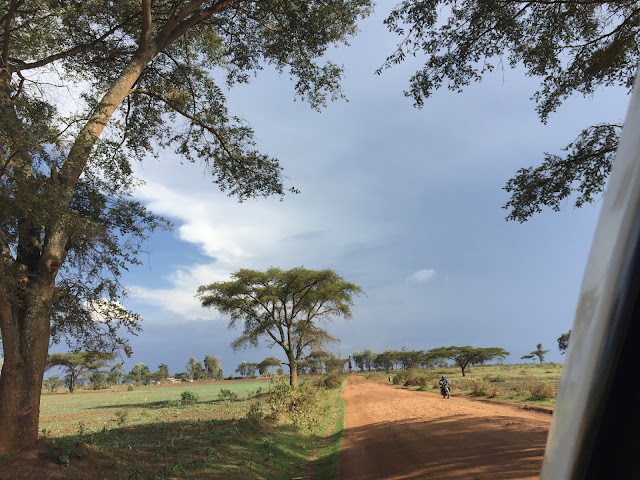 Phoebe's parents, Henry and Grace, are so kind. I had lunch with them just before my birthday in 2015, so we're now old friends. Just before we'd visited in 2015, Henry had suffered a stroke. He was unable to speak and couldn't move from his chair...but smiled and followed along with the conversation as best he could.

This year, as Phoebe and Stellah made lunch, we sat in the living room and chatted. Grace got up to check on something and Henry surprised me by turning and, in perfect English, asking about the weather in the U.S. I was shocked! When Grace returned, she could see the look on my face and said, "He's really improved, hasn't he?!"

They asked about my family, many aspects of America (including Trump) and told us stories about Kenya. Later in the afternoon, Sunny asked about how they met and came to live on this land...they were so happy to tell the story. (Grace was 16 when they were married! And here they are, six grown children later.)

At one point, Henry stopped me to say, "You are very joyful!" I laughed and said, "Thank you!" Grace replied, "Not everyone is joyful. Some people are very sad. It's nice that you are so joyful."

About an hour later, lunch was served: beans and rice, chapati(!!!) and cabbage. Grace served Henry a big bowl. 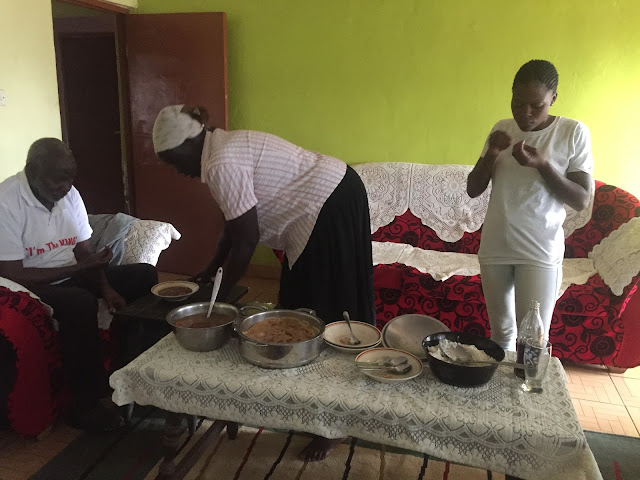 As special guests, we were given first choice of sodas. 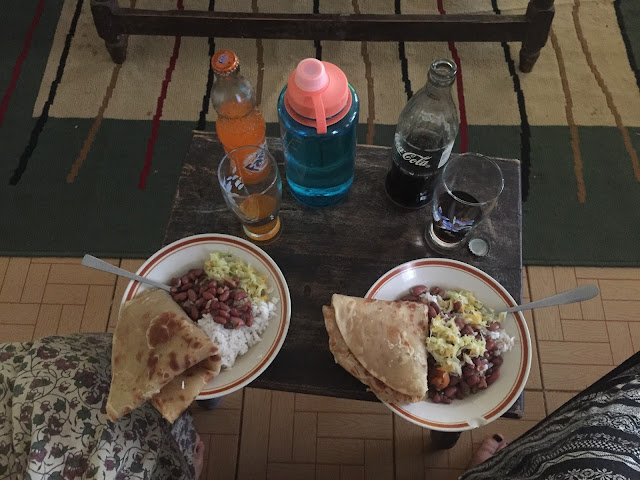 We ate until we could eat no more (at their urging) and then took a few photos together before heading home. (Henry's shirt says, "I'm the KING!" and the back says, "I love Jesus!"--a gift from his oldest daughter.) 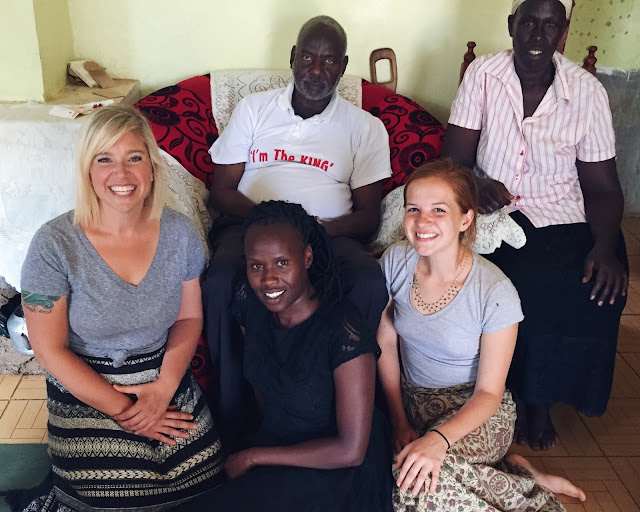 Sunny and Stellah outside the home 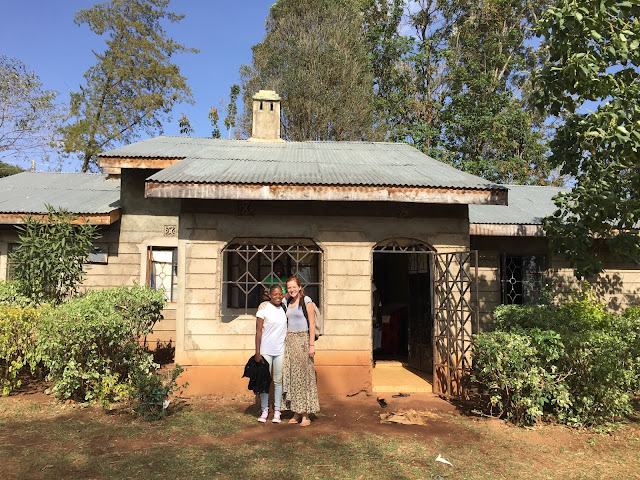 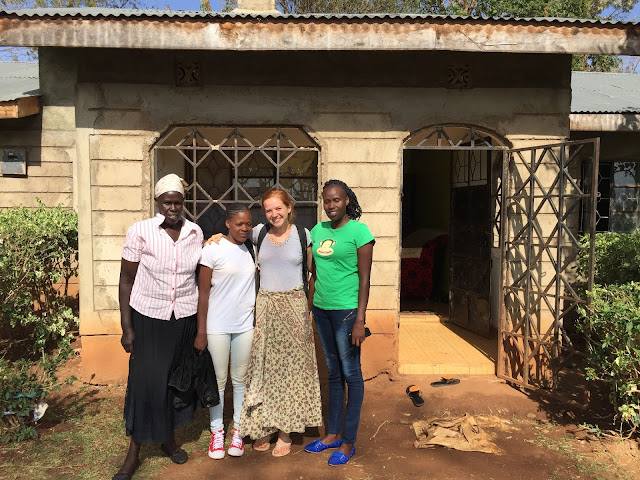 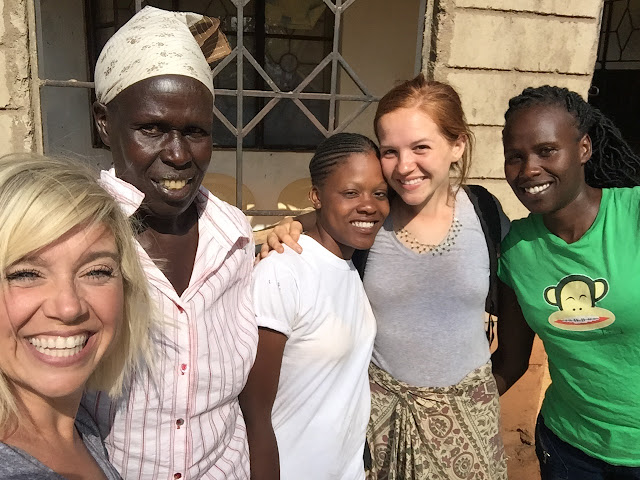 It was getting late and we didn't want to miss Sunday Night Dinner with the kids, so we passed by our house quickly to change clothes and hopped back in the van.

As we neared the gate, we stopped to wave at some of the bigger boys who were playing soccer with the neighbors. When we pulled into Precious, some of the kids were laughing and pointing at the roof of the van. When we'd stopped out front, Hillary had climbed up the back and way laying on top of the car. I jumped out and snapped a quick picture as he stood up. 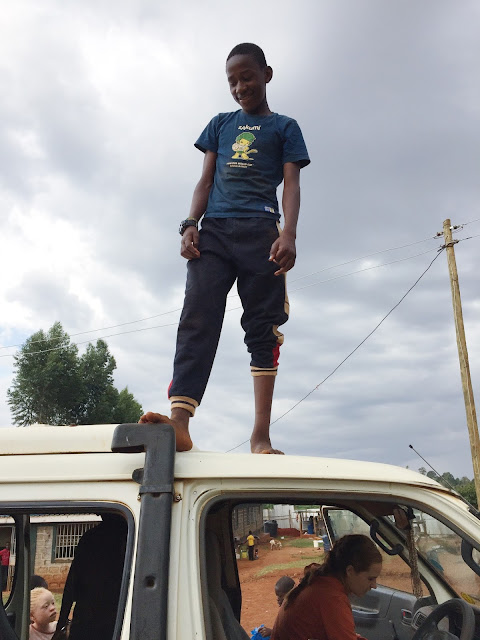 The rest of the evening was filled with the same old things: lots of laughter, a bit of dancing, and delicious chapati! 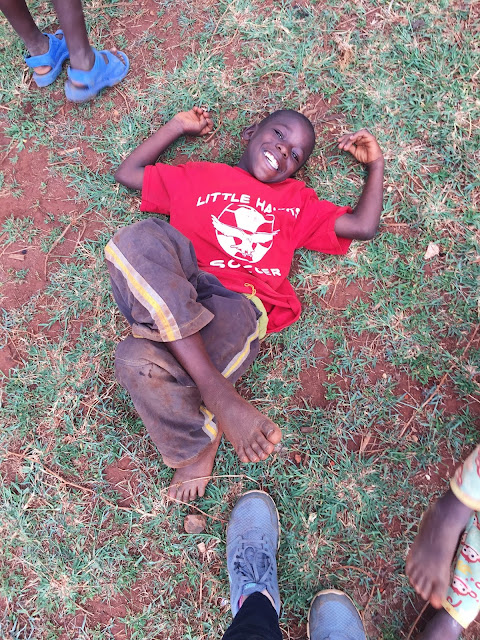 
Augustus had gone to visit his grandmother when school closed and finally came home this weekend. I was so happy to see him! And he made a point to sit next to me and chat several times. He is pretty insistent on my speaking Swahili to him and, this time, was very complimentary of my ability to keep up! He calmly corrected me a few times as I spoke to other kids and only yelled at me once when I mispronounced the word for "seizure" but wouldn't tell me why he was so frantic...so I'm assuming I must have accidentally said something inappropriate. 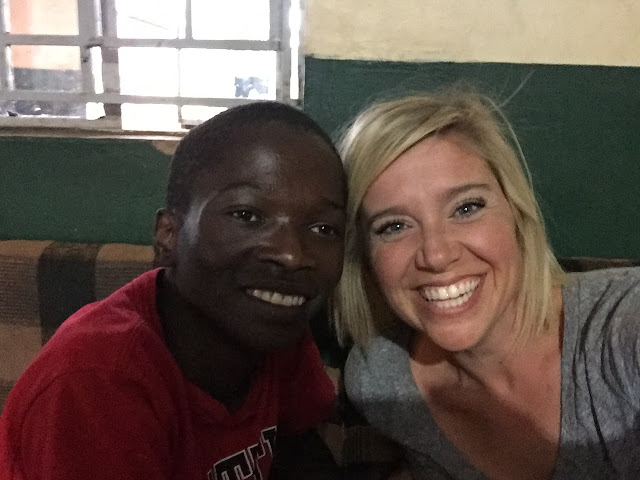 Rooney, who is non-verbal, would walk over and make a gesture like he was pointing a camera and then pause and smile...that was my cue to take out my phone and get a photo of the two of us. 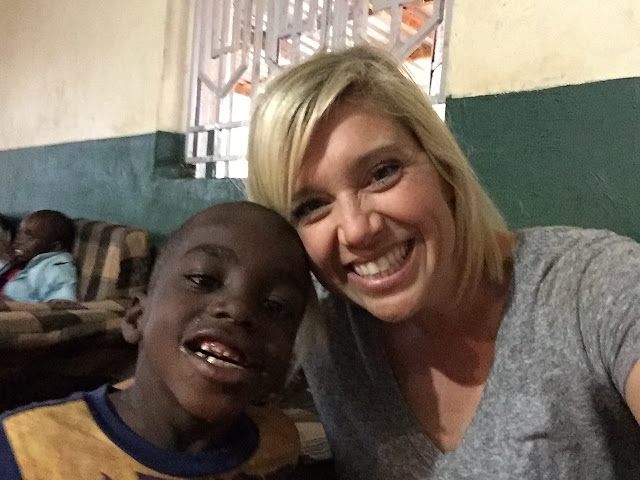 And, of course, Dorcas wanted one, too 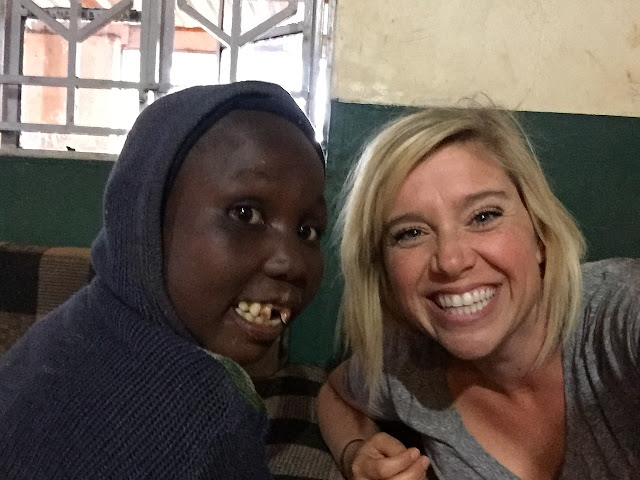 Manu lived at Precious Kids Center for a few months before moving home with his mom. Sammy had mentioned that his mother would be a good candidate for a small shop, since she is very responsible and could use some financial stability since care for Manu's hydrocephalus (and subsequent skull infections) can be very expensive.

Phoebe had called Mama Manu earlier in the week and asked if we could come and see her. Instead, Mama Manu came to Precious, so we were able to ask questions about what might work best for her and her situation. She said a small shop would be wonderful, so we promised to pick up the supplies and drop them off later in the week. 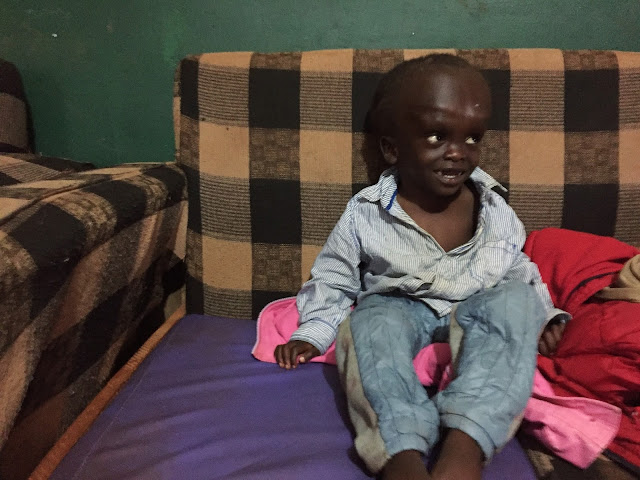 I sat down with Manu and he kept calling me Sammy. Turns out, he calls pretty much everyone Sammy. 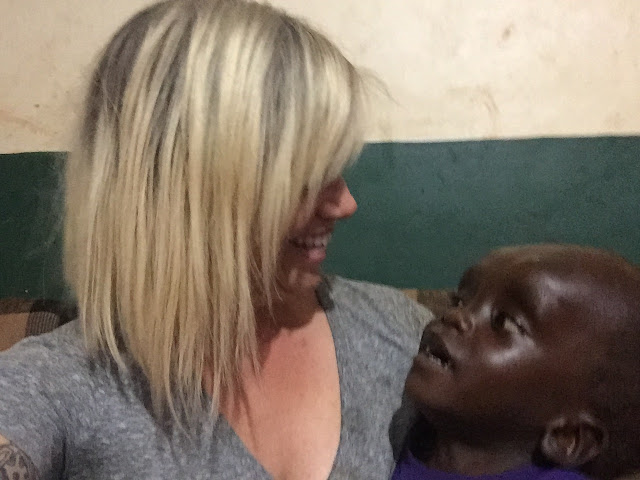 Dinah crawled over to the couch and called up to Manu. He smiled and waved and then leaned down to shake her hand. Then tapped the spot on the couch next to her and said, "Come!" So I picked her up and set her down next to him. They cozied up to one another and chatted until dinner was served. 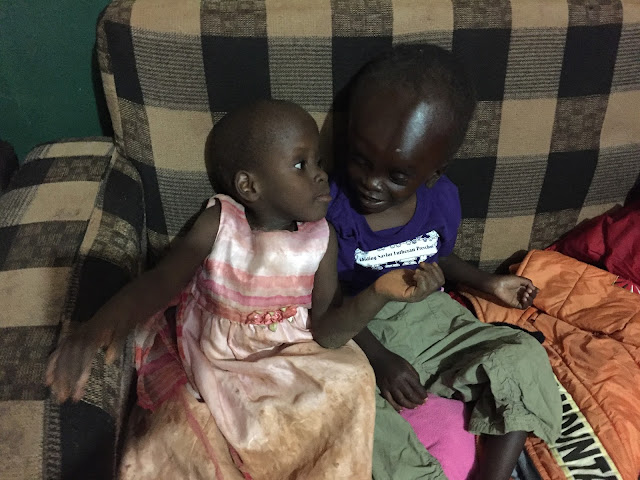 Suzie was getting hungry...and a hungry Suzie is a bit more out of control than usual. One sure-fire way to keep her calm in the waiting is a piggyback ride.

So, here we are. Spinning and smiling as we wait for chapati! 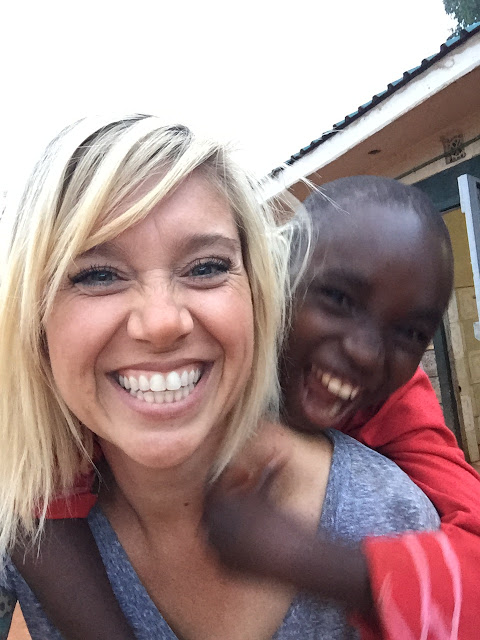 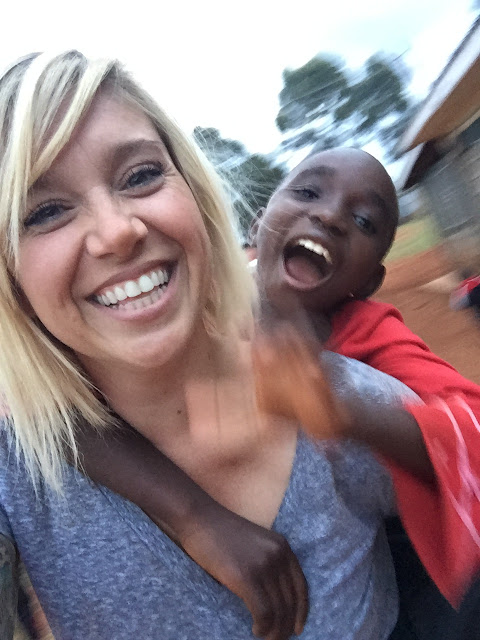 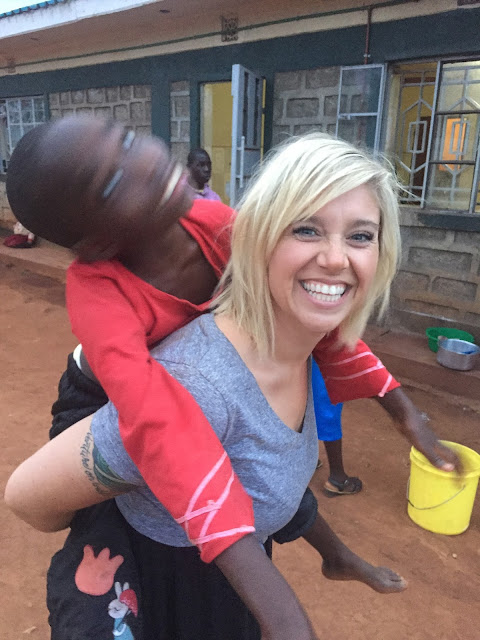 Dinner was served a little later than usual and since we'd been trying to avoid driving in the dark, we were just about to head out when the house moms came out with two heaping bowls of amazing potatoes and a stack of warm chapati. They told us we could not leave until we'd eaten. (They're wonderfully maternal.) 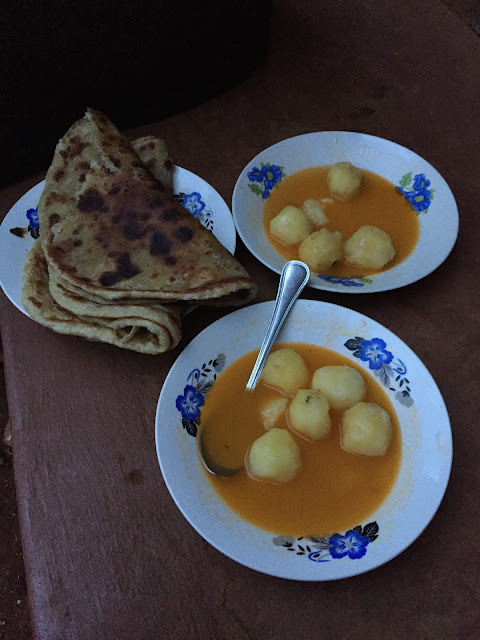 Sunny and I sat outside watching the sunset as we ate our chapati and potatoes. We giggled as kids passed us and paused to make sure we really were eating--everyone so concerned about our nutrition! We finished dinner and drove home laughing and talking about the day. It was very different from our typical Easter Sundays--just as full of family and friends, but with way more chapati!
Posted by Allison at 6:12 AM

You ARE tremendously JOY-filled! So love these posts!! You're such a great writer!